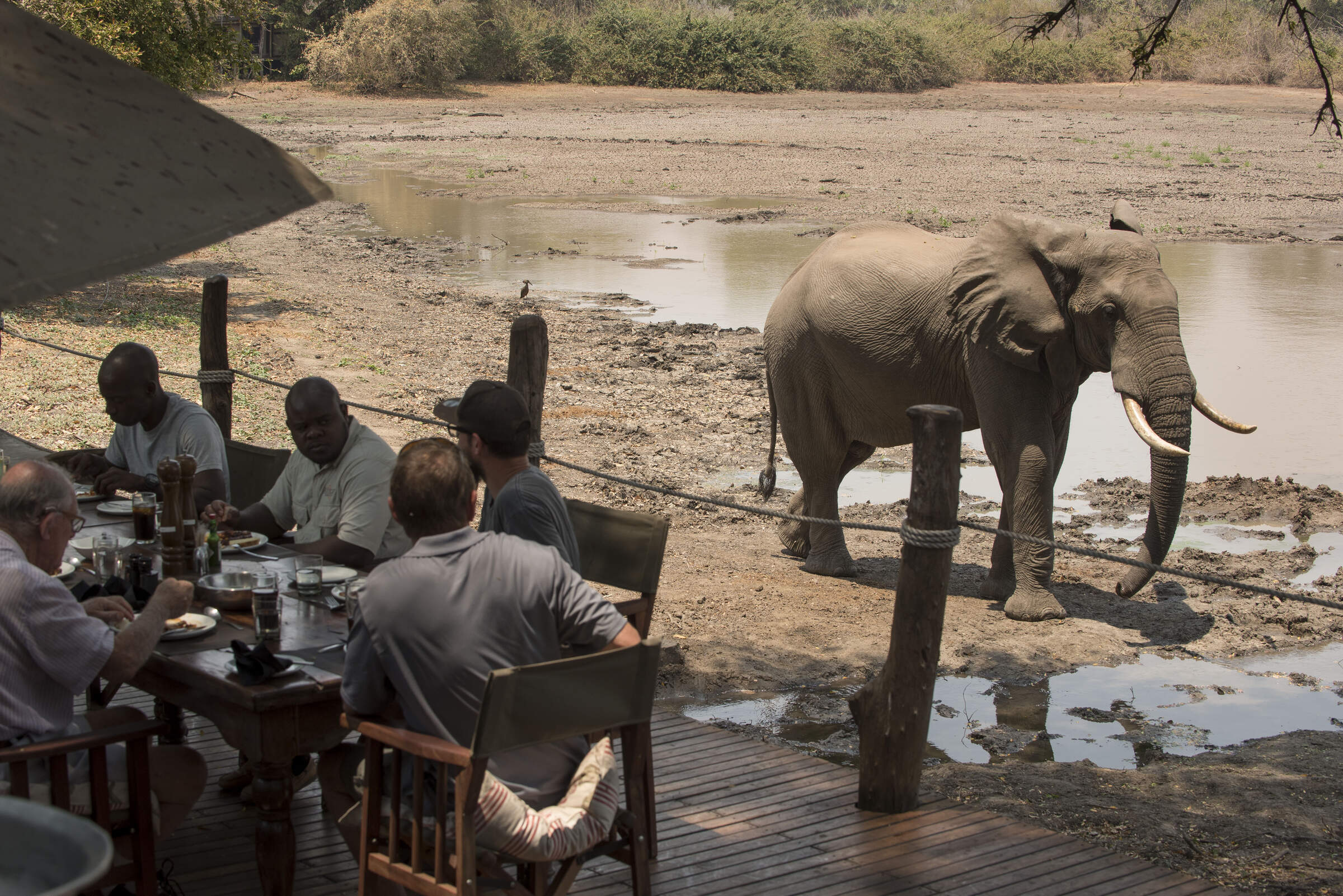 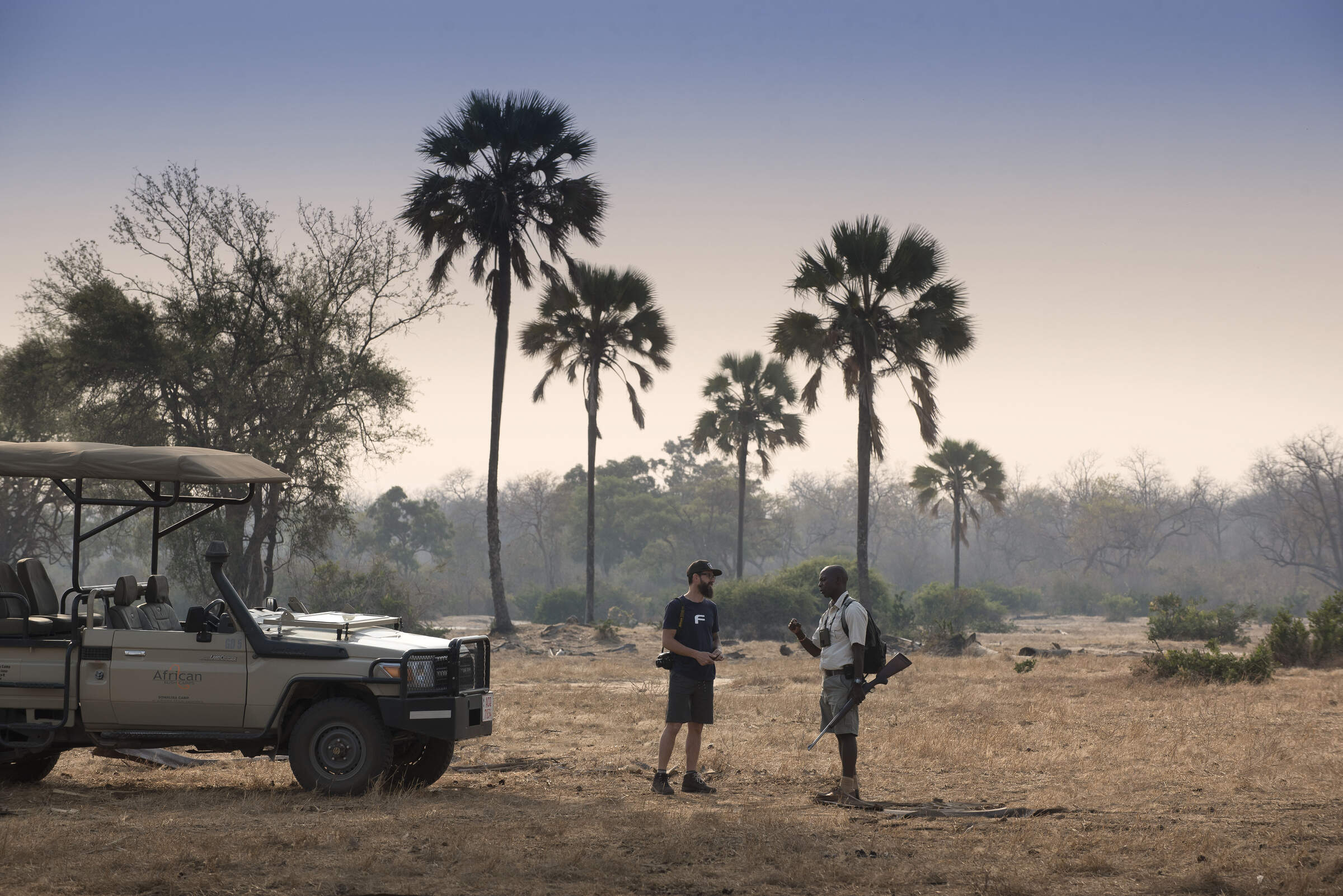 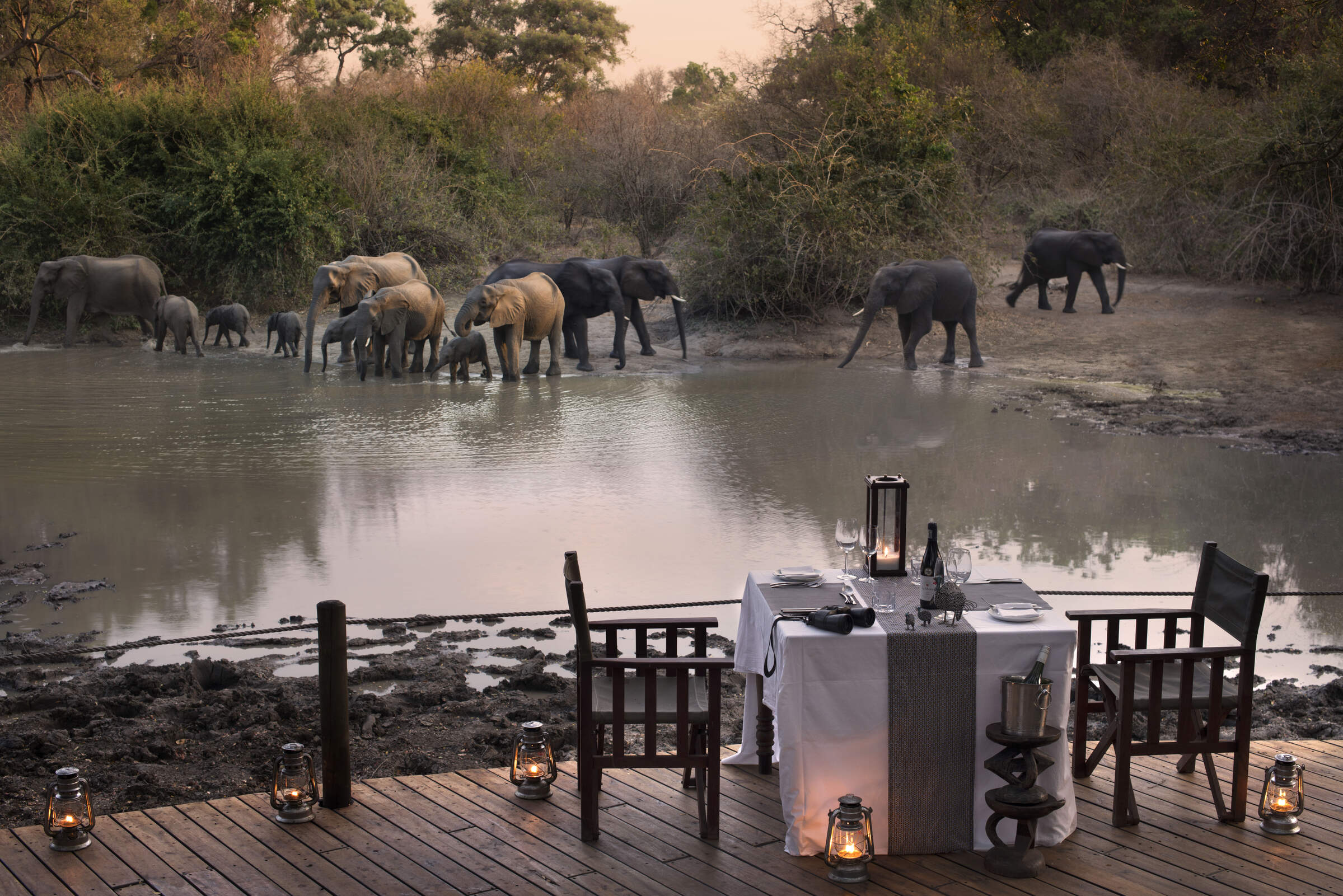 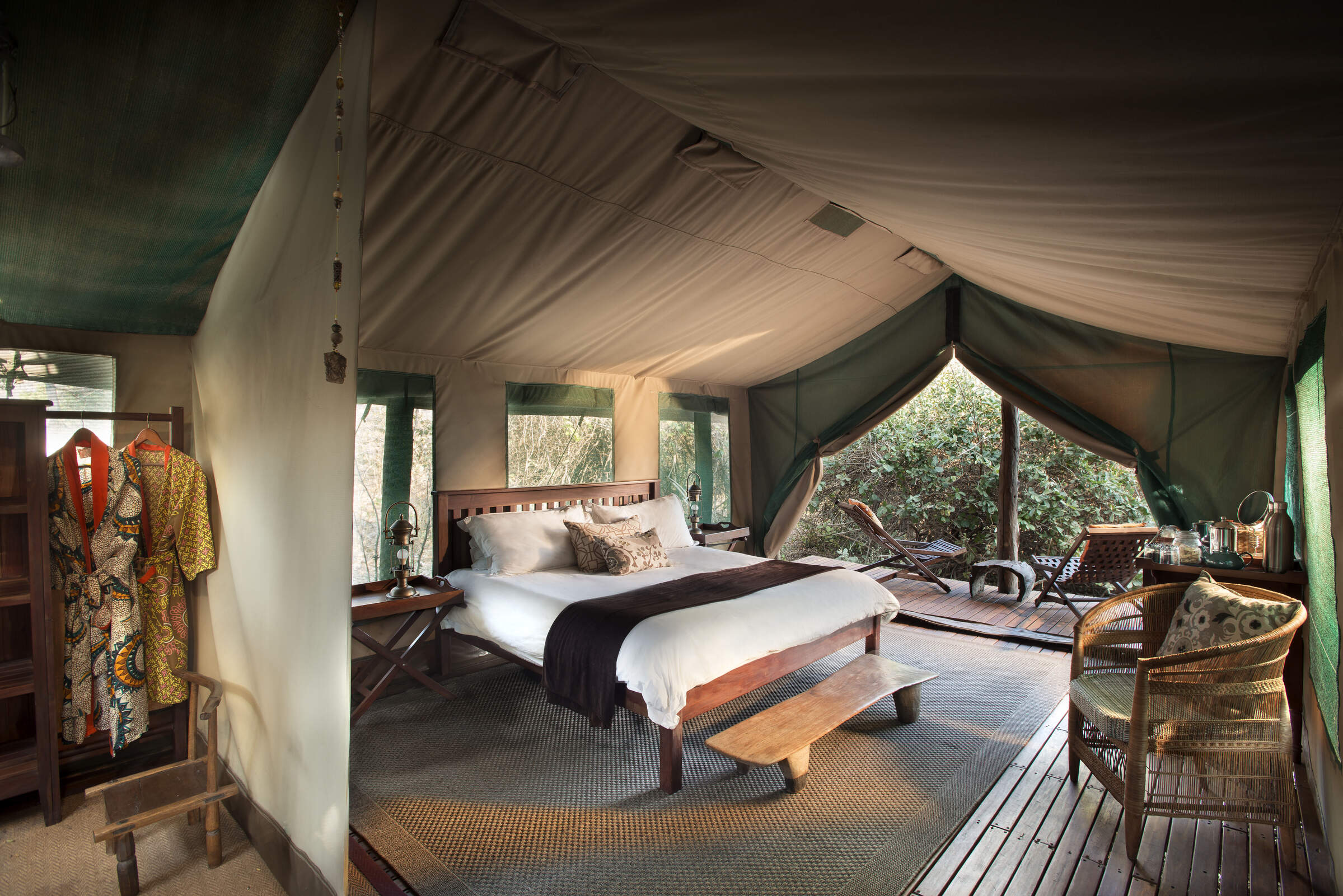 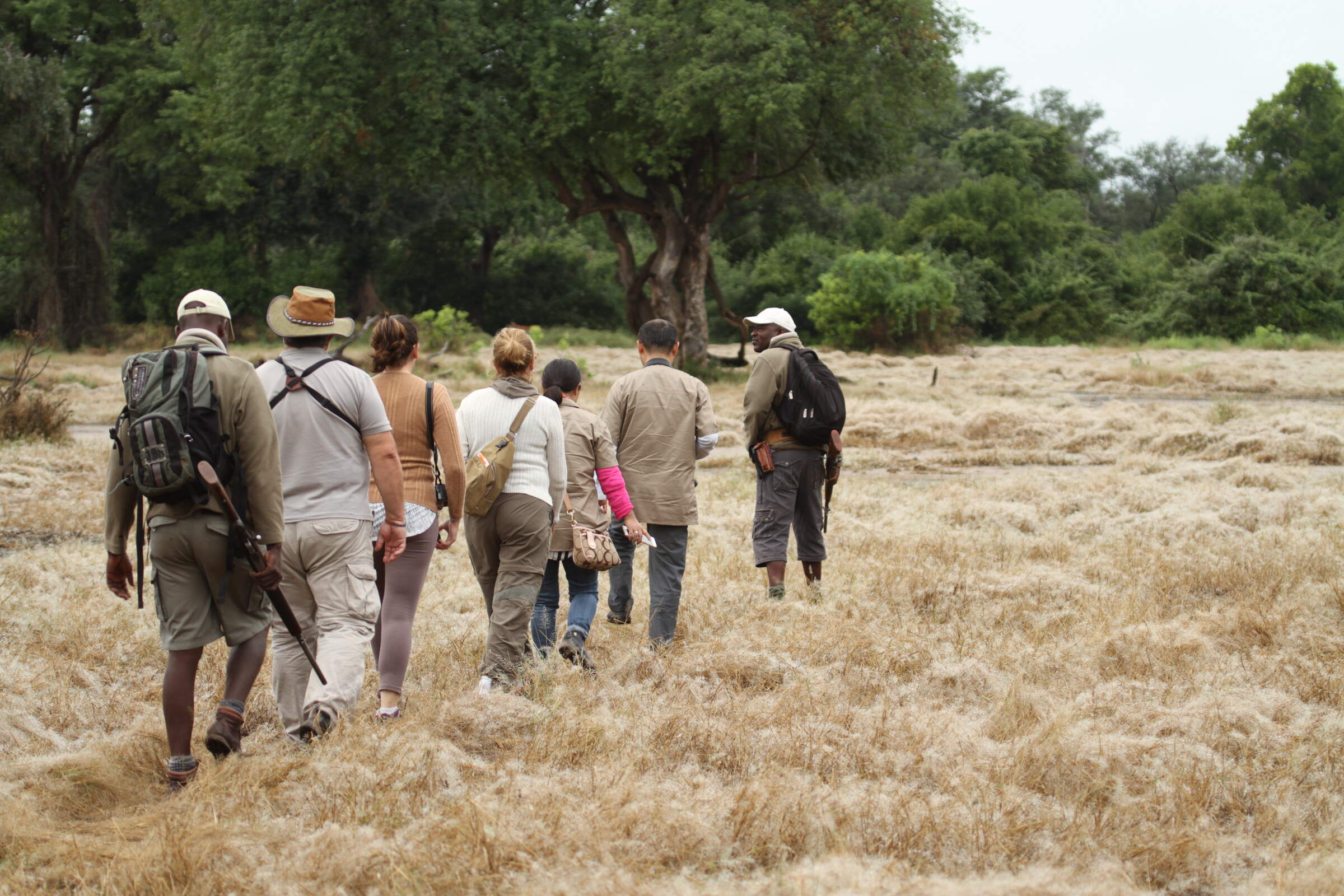 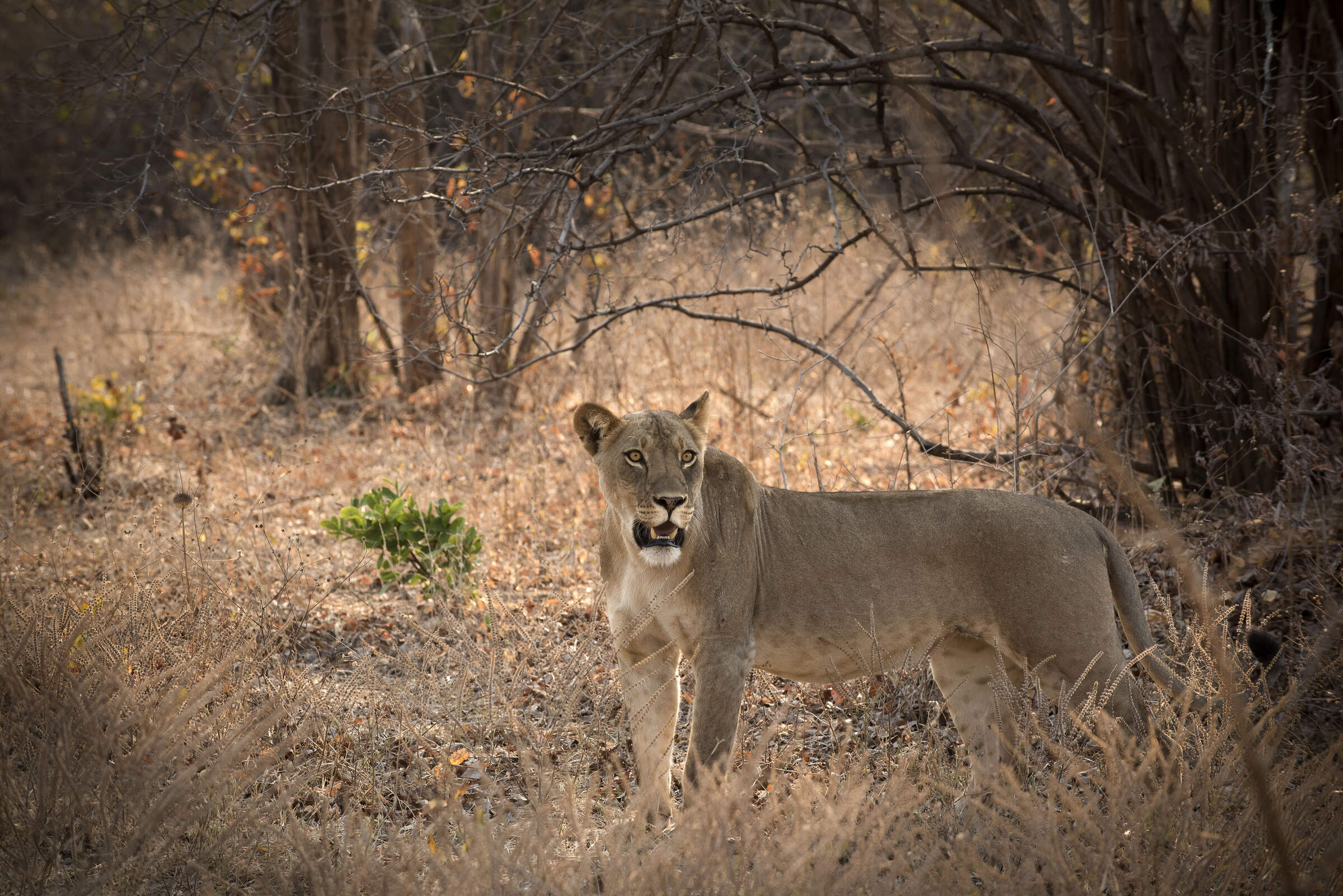 Situated in one of the most remote parts of Zimbabwe’s Mana Pools National Park, Kanga Camp lies next to ...

... the isolated Kanga Pan. While most other camps in the park line the Zambezi River, Kanga is about 15km away (as the eagle flies), and has a rather different, more exclusive feel.

During the safari season in Mana Pools National Park (April to November), the wildlife tends to move towards the permanent Zambezi River to find a reliable water source. Taking advantage of this game-rich area, the majority of camps in the park have been constructed along the riverbank, but Kanga Camp has taken a different approach. The property lies in the bush next to the eponymous Kanga Pan, which is the only source of water in the area. As surface water dries up, the pumped waterhole entices game from the parched surrounding regions, providing superb game viewing in a largely exclusive environment.

Having been upgraded from a simple bushcamp in 2011, Kanga Camp now consists of six tented chalets, raised on wooden platforms and set discreetly around the edge of the pan. Far from the traditional image of a “tent”, these are solidly built structures with substantial timber frames supporting canvas walls and roofs, and floor-to-ceiling mesh windows allowing in natural light. In the evening, solar lights supplement the traditional storm lanterns.

Inside, large double or twin beds form the centrepiece of each tented chalet. A canvas partition separates the bedroom from a small storage area with wooded shelving and a hanging rail. It also provides additional privacy for the outdoor en-suite bathroom, which is accessed through zipped shade-mesh doors at the back of the tent. Here, head-height reed walls surround a shower, washbasin, large mirror, and a flush toilet hidden behind a section of wall.

Kanga's chalets include a honeymoon suite, which has the bonus of a large, free-standing bath in a private annexe, and – furthest from the main area – a family chalet, which has a particularly secluded outside shower and bath. This family chalet is larger than the others, and as well as a double bed it has two sofas that convert into single beds for children. It also features a small seating area and an extensive balcony that leads right round the side and front of the chalet, offering fantastic views of the pan.

Kanga Bush Camp's main communal area is elevated on a series of split-level, stylish wooden platforms under a large stretched-canvas roof. This is where the bar and lounge area are found, as well as a good selection of books, and some comfy hideaway corners in which to while away the afternoon. Steps lead down to another deck where there is a dining table and a firepit surrounded by camp chairs: a great area to discuss the day's events before and after dinner.

On an adjacent level, jutting out over the edge of the pan, another deck is set with comfortable chairs and sofas, making a very pleasant spot for an “armchair safari”. On our last visit to Kanga in October 2018 we saw an almost constant procession of elephants, zebra, impala, kudu and baboons coming down to drink during the day, followed by lion, civet and hyena after the sun had set. Beneath this deck is a rudimentary hide, complete with fold-up chairs, which offers an eye-level if rather cramped view of the waterhole. During our stay the hide was also playing host to wildlife documentary makers who provided some interesting insights into the action.

Completing the facilities at Kanga is a small plunge pool with a couple of sunloungers and umbrellas.

When it comes to activities, this bushcamp specialises in walking safaris lead by top-level professional guides. Game drives in open 4WD vehicles in both the early morning and the evening are also available – as are all-day drives in the area beside the Zambezi. As an added bonus, Kanga is permitted to conduct night drives on their concession.

The game that comes to Kanga Pan is superb, particularly towards the end of the dry season, so this is genuinely a great property to sit and chill around camp for a day. Equally, the whole-day drives to the Zambezi riverfront area can be excellent, although these are less popular towards the end of the dry season (October–November), when midday temperatures can soar. However, we've found that the shorter morning and evening drives, in the thick bush in the vicinity of camp, are much less productive, and can even be disappointing. Because of this we usually recommend Kanga in combination with a few nights at a riverfront camp, allowing guests to get a feel for two very different areas of the park. An obvious choice would be its sister camp, Zambezi Expeditions, which would allow guests to explore the riverfront in more detail and also to enjoy fishing or canoeing activities.

A more adventurous option from Kanga Bush Camp is a sleep out approximately a kilometre from camp, where four sleeping platforms have been erected high up on wooden stilts under large wild fig trees. These consist simply of a mattress, with pillows and duvets, laid on a wooden platform, and completely covered by a mosquito net. Down below, two platforms each share a flush toilet and a bucket shower. A late afternoon walk from Kanga, with your guide, will bring you to “Kanga under the Stars”, where staff will be waiting for you with ice-cold drinks around a campfire. Later there is a three-course dinner, and in the morning, breakfast is served before walking back to Kanga.

Kanga Bush Camp combines seclusion with luxury, and a hint of the raw experience of camping in a wilderness area. Set in a different environment to most of Mana Pools’ other camps, which are beside the river, it offers an alternative take on a safari here. Come to Kanga for three nights or more and have time for a full day safari down to the waterfront, or stay for a shorter time in combination with one of Mana's riverfront camps and use it as a place to relax and unwind on an armchair safari.

Location
Mana Pools National Park, Zimbabwe
Ideal length of stay
Kanga works best as a 2–3-night stay in addition to time at another camp on the Zambezi riverfront. Alternatively, come for longer and explore the waterfront on full-day game drives.
Directions
Kanga Bush Camp is generally reached by light aircraft; The nearest airstrip is Dandawa, which is about 20 minutes' drive from the camp.
Accessible by
Fly-and-Transfer

Usual board basis
Full Board & Activities
Food quality
During our stay in October 2018, as on previous visits, we found the food at Kanga to be of a high standard. We understand that with advance notice most dietary needs can be catered for.

A light continental breakfast is offered around the campfire before the first activity of the day. This usually consists of porridge (kept warm over the fire), cereals, fresh fruit, cold meats and cheeses, and toast, with tea, coffee and juice.

Lunch is served on returning from the morning activity (usually at about 11.30am). We enjoyed “building” our own burgers with fillings including onions, cheese, bacon, beef burgers, cucumber, salad and more. This was followed by simple but delicious chocolate ice cream.

A substantial high tea is served in the late afternoon. On our visit we enjoyed feta and spinach puff-pastry parcels, and a mixed berry cake.

Following the afternoon activity, drinks around the fire are followed by a three-course dinner. We had a starter of leek and potato soup with fresh bread rolls, followed by pork chops with roasted vegetables, Greek salad and a butternut and avocado salad. On cold winter evenings dessert is generally served around the fire and there is also the option of cheese and biscuits. We enjoyed profiteroles with crème caramel, which rounded off our meal very well indeed.

Attitude towards children
Kanga does not generally accept children under seven years of age, although they are quite flexible and can consider each situation on a case-by-case basis.
Property’s age restrictions
Generally no under 7s.
Special activities & services
None
Equipment
None
Generally recommended for children
Given the adult ambience of Kanga and the amount of dangerous game in the area, Expert Africa doesn't recommend Kanga Camp for children under about 12.
Notes
This is a very open safari camp, with big game passing through regularly. Children must be supervised by a parent or guardian at all times.

Power supply notes
There is a back-up generator. Power for charging batteries is available in the main area 24 hours a day.
Communications
There is a radio link to other lodges, and email and Skype may be used in an emergency.
TV & radio
No
Water supply
Borehole
Water supply notes
All bathrooms at Kanga are plumbed in with flush toilets and hot and cold showers.

Malarial protection recommended
Yes
Medical care
The nearest doctor is in Kariba, a few hours' drive away. The nearest airstrip is 20 minutes' drive from Kanga, which makes an emergency evacuation much quicker.

In camp the management and guides are trained in first aid.
Dangerous animals
High Risk
Security measures
The managers and guides sleep on site.
Fire safety
Fire extinguishers are dotted around camp.

Disabled access
Not Possible
Laundry facilities
It is possible to have all laundry done at the camp and this is included in the rate. However, as underwear is not accepted, there is a pot of detergent in each chalet so guests can hand-wash smalls as required.
Money
There are no safes in the chalets at Kanga, but there is a safe in the main office.
Accepted payment on location
As most stays here are fully inclusive, there is little need to make payment, and there are no card facilities. Tips, and anything else are generally settled in US dollars cash.

Stretch Ferreira Safaris Camp is a small, owner-run camp on the banks of the Zambezi River in Mana Pools National Park, with the emphasis on great guiding.

Zambezi Expeditions is a simple, semi-permanent camp along the Zambezi River that offers excellent guiding and standards of service.

The Canoe Trail is a multi-day trip, along the Zambezi with some of the best guides in Africa. Each night you'll camp on the banks of the river.

Closely associated with Vundu Camp, Little Vundu has the same great location and quality of guides, and is occasionally used for private group bookings.

Nyamatusi Mahogany is a family-friendly, yet remote and luxurious safari camp in Mana Pools National Park.

Kavinga is a comfortable tented camp tucked away in a less-visited area of Mana Pools National Park with surprisingly good wildlife and an excellent hide.

In a shady spot beside the Zambezi, Little Ruckomechi is a small but luxurious camp offering a reange of activities including walking and canoe trips.

Sapi Springs Camp offer the chance to feel closer to the bush than almost any other camp in the Mana Pools Area.

One of the original properties in Mana Pools area we are excited to be featuring Chikwenya Camp again.

Building commenced on Tembo Plains Camp in February 2021. Details are sparce at this stage but we'll update this page once we know more.