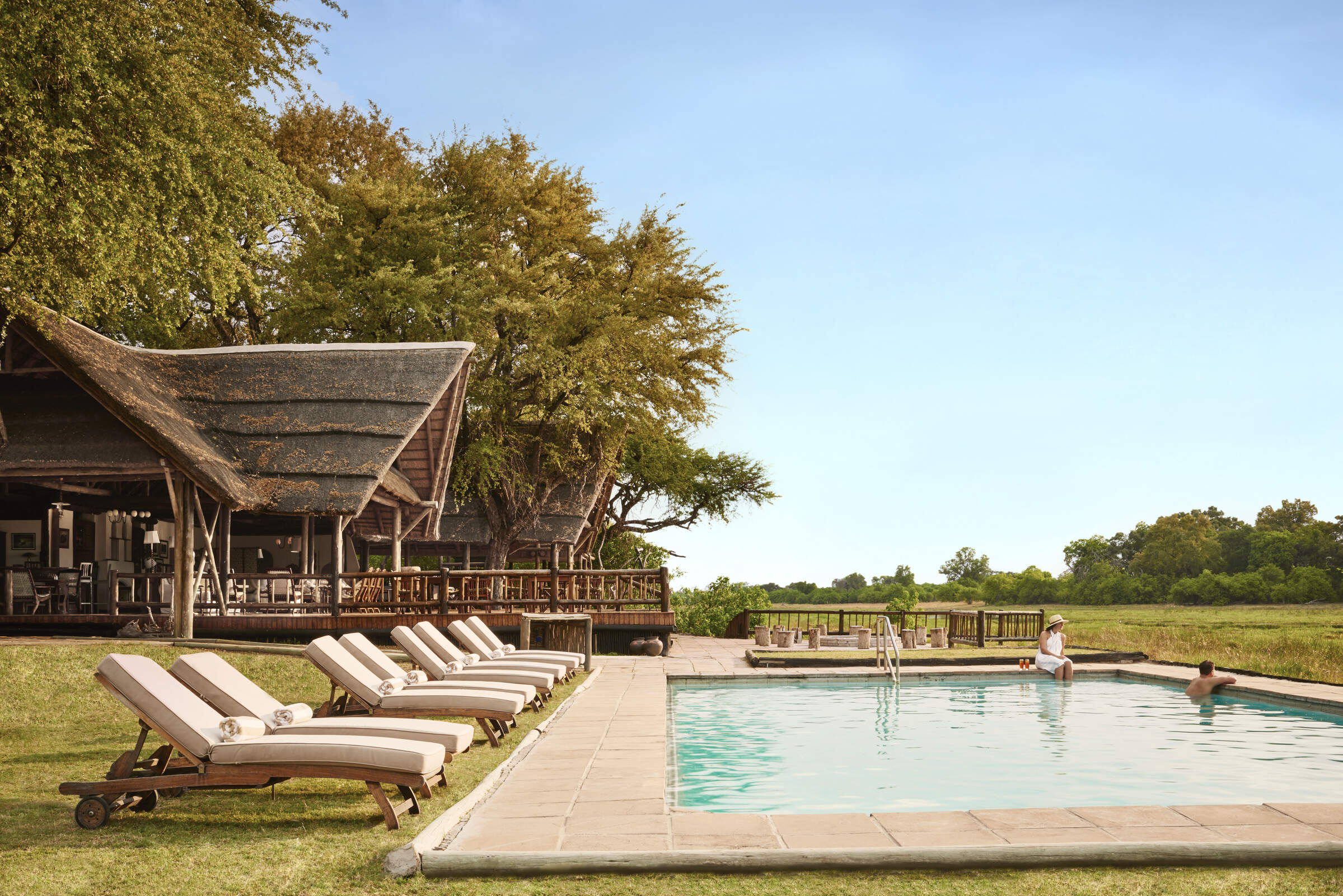 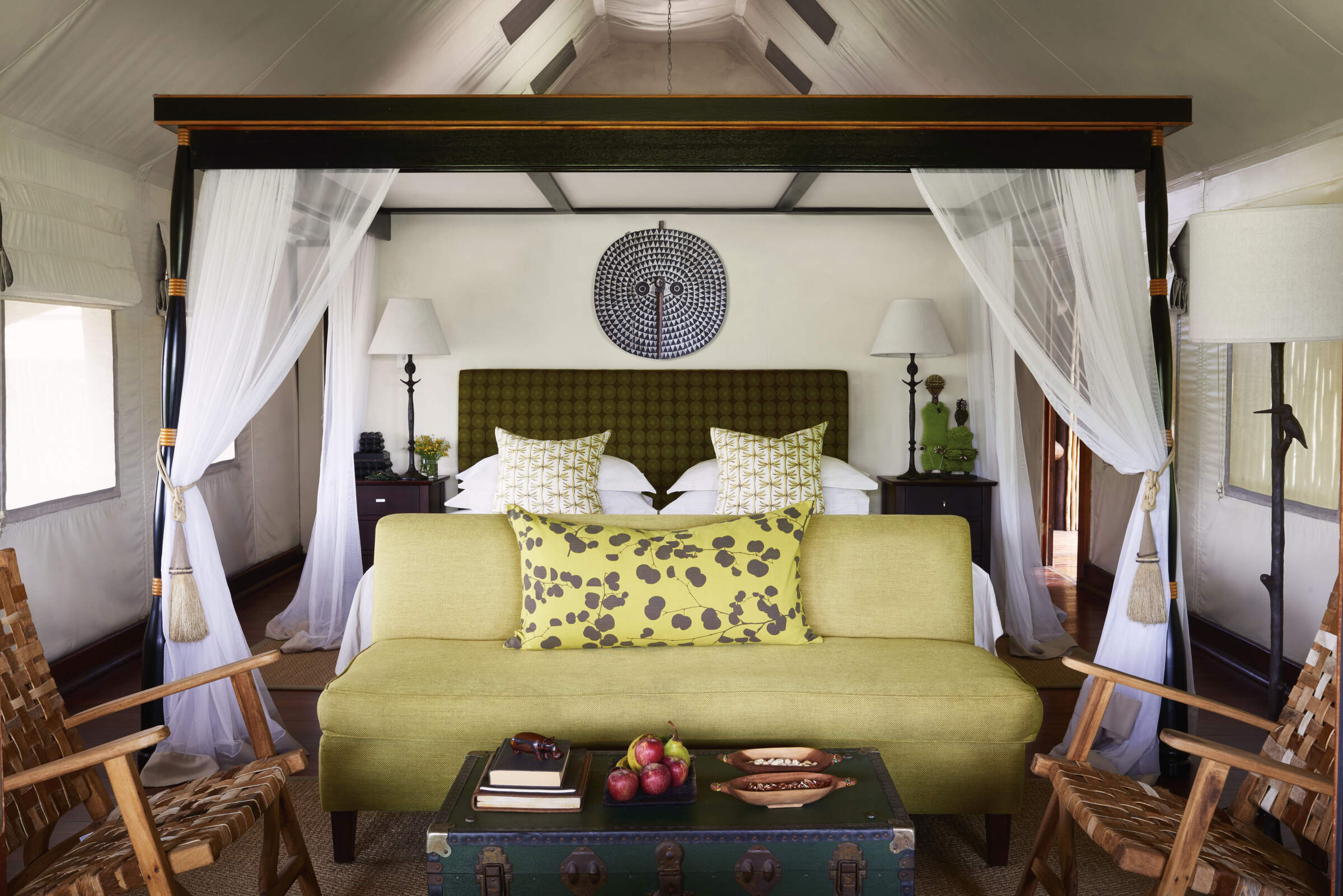 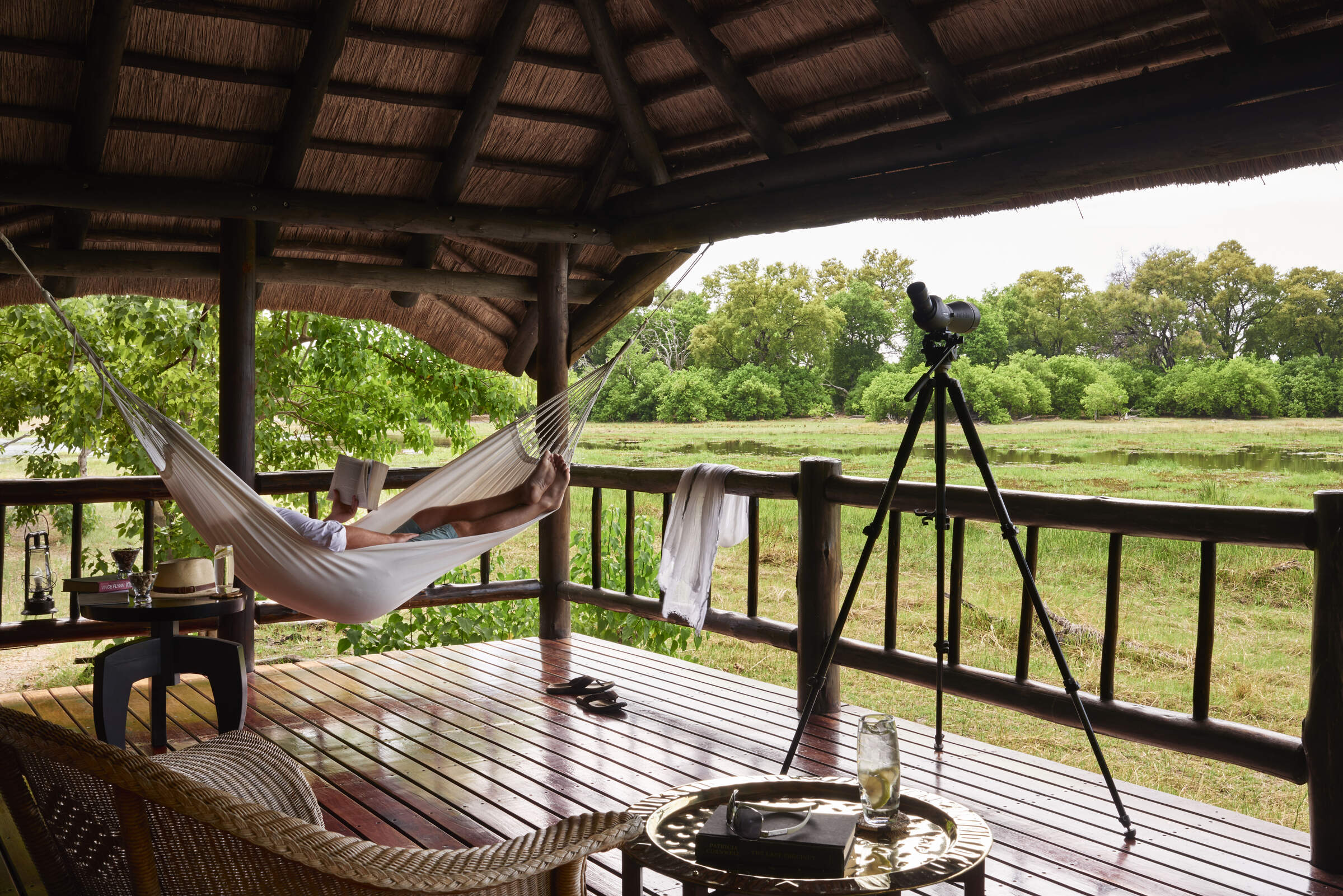 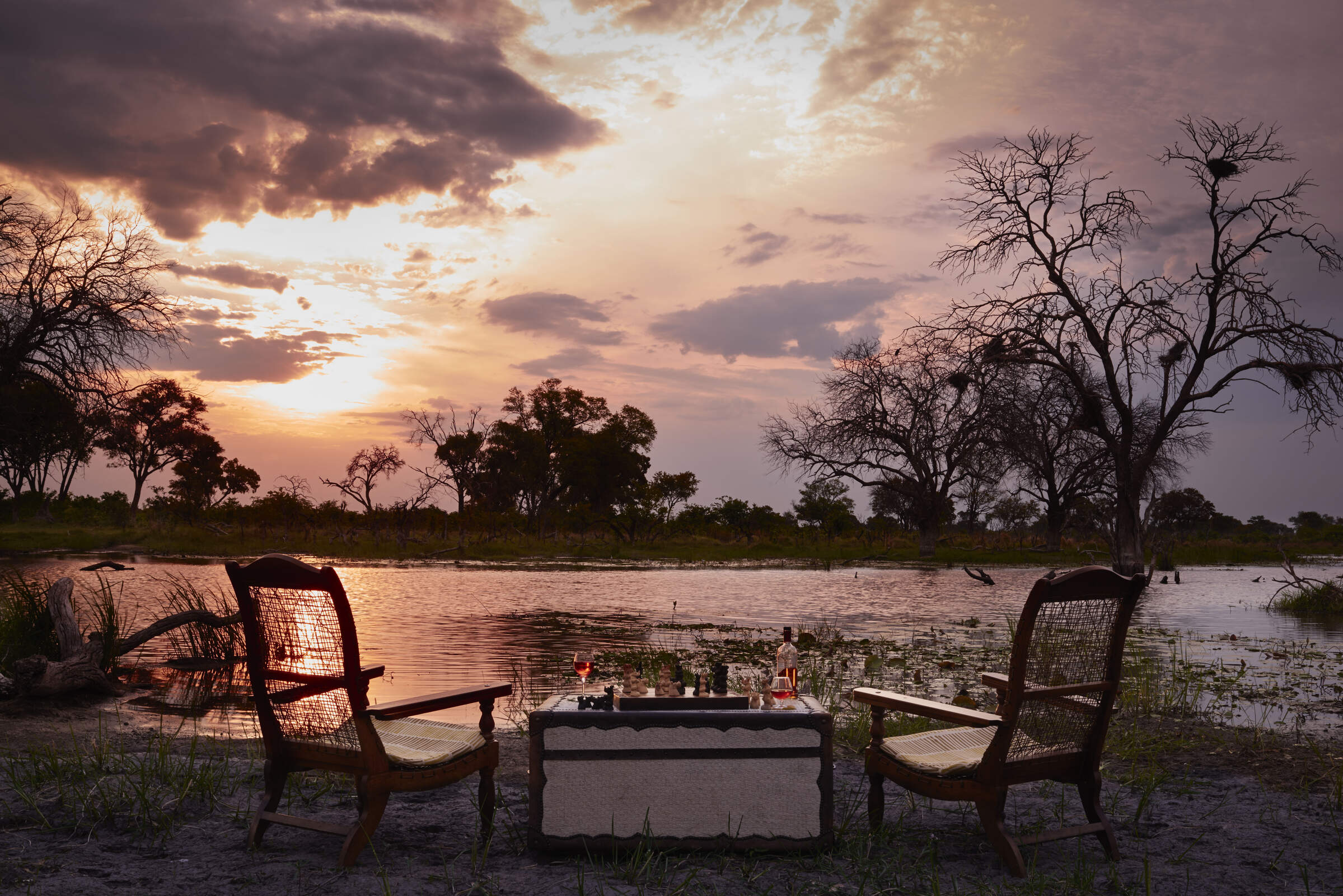 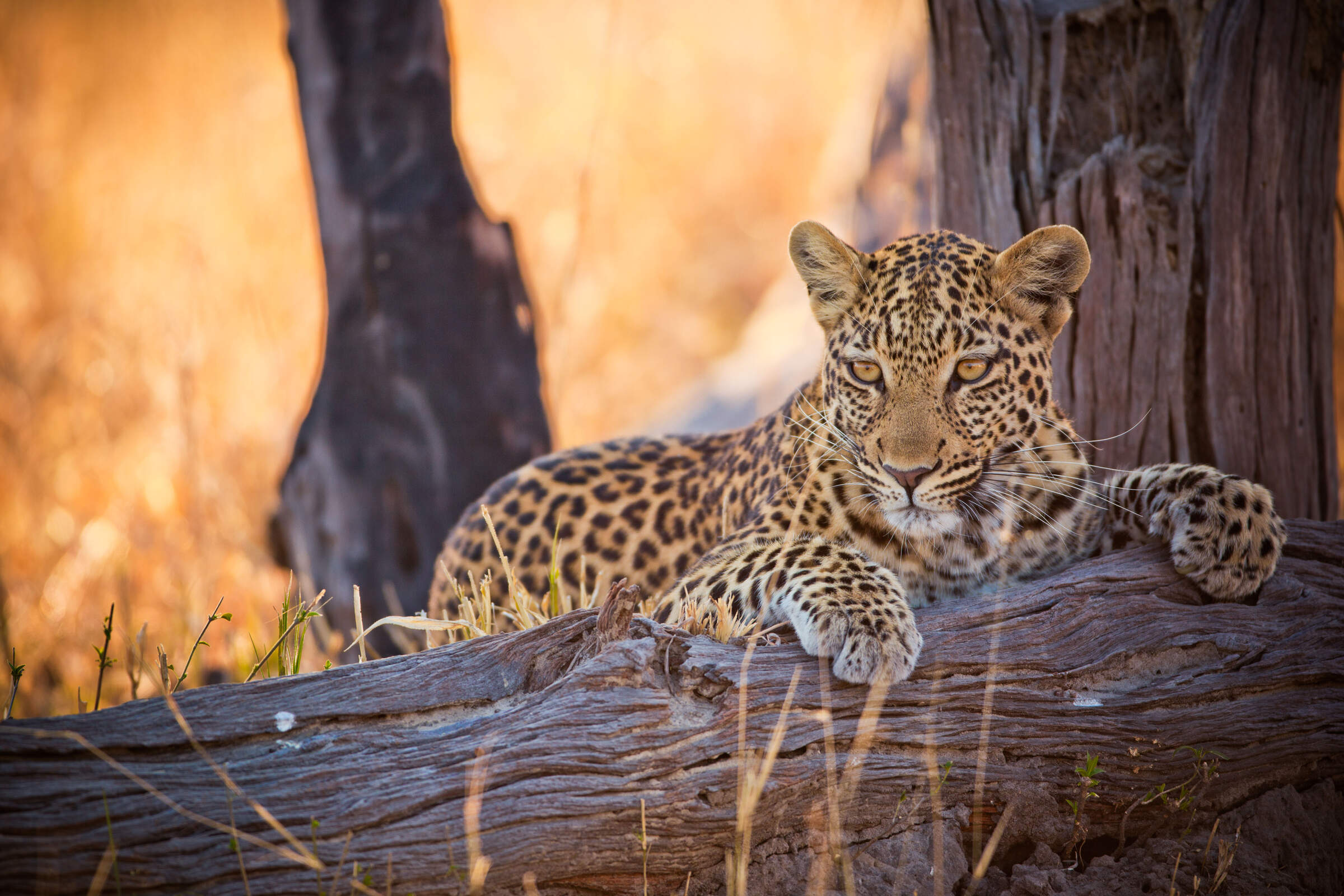 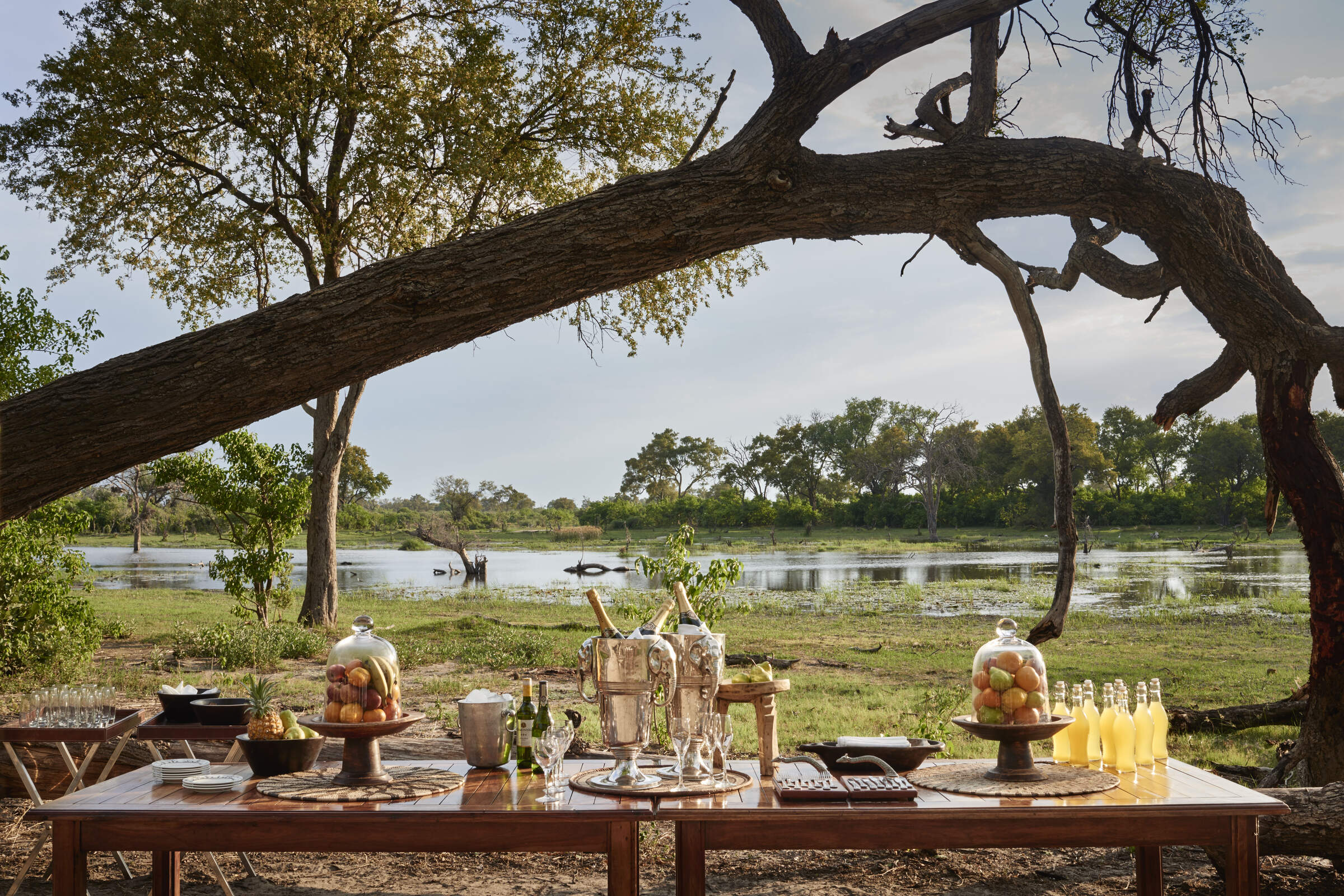 Chris, from Expert Africa, first visited Khwai River Lodge around 1992, and he has fond memories of the original ...

... lodge, with understated little bungalows dotted among the leadwood trees on the edge of the river's floodplain. This venerable old lodge, in a game-rich area overlooking the northern edge of Moremi Game Reserve, was demolished around 1997, apart from the basic structure of its old office, and over the next couple of years, a new more opulent lodge arose from the rubble, built to a very high standard.

The present Khwai River Lodge was modelled on the same design as its sister camp, Savute Elephant Camp in Chobe National Park. There are now plans to renovate and remodel the whole camp again in 2017, bringing it more into line with some of the more contemporary camps of Botswana. As soon as we have more news, we will update this space.

For now, Khwai River Lodge’s build quality is already very high, and no expense seems to have been spared. The central area at is slightly raised on a timber platform and topped by an enormous thatched roof. It includes a lounge with a fireplace and a bar. You will also find chess sets, a TV with a library of wildlife videos, comfy couches and a small library. In the adjoining dining area, wooden tables are set for stylish dinners, alongside a wide area of decking overlooking the narrow, shallow river valley.

Built into the deck is a huge swimming pool overlooking the plains, while nearby, a raised observation deck with thatched roof shelters a small telescope. It's a good spot for game viewing or perhaps the occasional intimate private dinner.

Khwai River Lodge also has a spa facility which offers massages, facials, manicures and pedicures, plus a couples treatment centre. A private library has internet access – available for guests to use, in addition to the WiFi throughout the camp. And the old office has been preserved as a small museum and curio shop.

The 15 tented chalets at Khwai River Lodge – 13 ‘standard’ and two ‘luxury’ – are far too opulent to be called simply ‘tents’. Because these are spread out in a line, each quite a distance from the next, the camp stretches for over a kilometre in length and the furthest chalets are a significant walk from the central lounge. All are built on high timber platforms, facing the Khwai River, with a wide veranda at the front, where two sunloungers, a table and chairs overlook the river.

The chalets themselves are huge canvas structures measuring about 18m x 6m. Glass sliding doors open onto polished wooden floors, topped with rugs and set with comfortable furniture – not just the usual safari chair or two. Twin three-quarter-size beds, which are usually pushed together, have high-quality cotton bedding, bedside tables and lamps, surrounded by mosquito netting, an air-conditioning unit and an overhead fan. There’s a fully-stocked minibar, tea- and coffee-making facilities and an electronic safe, while the desk has universal plug points, and a hairdryer. Each tent also has an electric heater, which we can imagine being very welcome during the colder winter nights!

Behind the bed, a wall separates the bedroom from the en-suite bathroom, finished with lots of dark wood and silver. The dressing room has plenty of hanging space and shelves, with dressing gowns and slippers for your comfort during your stay. There are twin basins and mirrors, a separate toilet and a large (two-person) shower, each behind a wooden door.

In addition, the two ‘luxury’ tented chalets have a double open-air shower and a beautiful deep copper-framed Victorian bath beneath the trees, as well as an extended viewing deck and a heated splash pool.

Activities at Khwai Lodge focus on game drives and guided walks with an armed guide. The morning activity usually commences after a light breakfast, and returns in the late morning for a substantial brunch. The afternoon game drive commences after high tea and will head back to camp after sunset. There is always the offer to head out for a night drive after dinner, when a spotlight will be used to seek out the nocturnal creatures of the bush.

Most of the lodge’s activities are conducted within the Khwai Community Reserve, where both day and night drives are allowed, and game vehicles can go off-road to afford the best possible viewings. If you spend three or four nights here it’s likely that you’ll also be taken into Moremi Game Reserve for a day drive – but here park rules forbid any night drives, off-road driving and walking.

While Khwai River Lodge was once the only permanent camp in this area, a few more lodges have opened up over the last few years. The area is also used by independent travellers, with North Gate (Khwai) campsite only a few kilometres to the west, and self-drive campers from Moremi often driving through to Khwai for the day. As a result, guests at Khwai River Lodge may well see other vehicles when game driving so it's not a totally exclusive experience ... but then it's a very beautiful area and the game viewing is very good throughout the year.

Khwai River Lodge is a well-run and very substantial luxury safari lodge in a picturesque area. The game densities here are usually high, especially toward the latter parts of the dry season, and the lodge’s location within a community concession allows it to offer day and night drives, and guided walks.

Location
Moremi Game Reserve, Botswana
Ideal length of stay
2–3 nights is usually the ideal length of time at Khwai River Lodge.
Directions
Khwai River Lodge is about 30 minutes’ flight from Maun Airport – or an hour from Kasane. From the airstrip, it’s a short game-drive transfer of about 10 minutes.
Accessible by
Fly-and-Transfer

Usual board basis
Full Board & Activities
Food quality
It’s been a few years since we last stayed at Khwai River Lodge, but in the past the food has always been of a high standard, and we expect this to still be the case. On our most recent visit in November 2015 we saw what looked like a delicious lunch being served. Unfortunately we didn’t have time to join in, but the guests most certainly looked satisfied!

Early morning tea and coffee can be delivered to your tent before you meet in the main area for the morning activity. Khwai usually serves a very light breakfast prior to your game drive/safari walk, then during the morning the guide will usually stop for tea, coffee and biscuits at some point.

A full brunch is served when you get back to camp, either from an à la carte menu, or as an extensive buffet if the camp is full.

Afternoon tea is always offered before the afternoon game drive – and while you're out, the guide will usually stop around sundown for a drink and a snack.

In the evening, a three-course dinner – a fairly stylish affair – is served in the main dining area.

Attitude towards children
Children of 8 years and older are welcome. However, children aged 8–12 years must share accommodation with an adult and the family must arrange private game activities (at extra cost).
Property’s age restrictions
8 years
Equipment
Khwai River Lodge can put an extra bed into a chalet to make a triple room.
Generally recommended for children
We wouldn't recommend a safari camp in a big-game area like this to travellers with young children, although it'd be fine for older, sensible children who have an interest in wildlife.
Notes
The camp and pool are both unfenced, and wildlife does move through the camp. In fact, on our last visit in November 2015, a female lion had come through the camp that morning. Any child would need to be under constant parental supervision.

Communications
Each chalet is equipped with an internal telephone to enable guests to contact both reception and other chalets.
TV & radio
Satellite TV and internet is available in the library.
Water supply
Borehole
Water supply notes
All the chalets have running hot and cold water, with a flushing toilet.

Malarial protection recommended
Yes
Medical care
All of the guides and camp managers are trained in first aid. The nearest doctor is in Maun and for anything very serious there is a Medivac system in place which can transport patients to the nearest hospital in Gaborone or even Jo’burg. Please note that it is only possible to fly out of camp during daylight hours as the bush airstrips do not have any lighting at night.
Dangerous animals
High Risk
Security measures
You will always be escorted to and from your tent after dark and night watchmen patrol the camp during the evenings.
Fire safety
There are fire extinguishers in the main area and in all of the rooms.

Disabled access
Not Possible
Laundry facilities
A daily laundry service is included at Khwai River Lodge.
Money
There are electronic safes in each of the rooms.
Accepted payment on location
The camp accepts payment in US Dollars, Euros, Rand and Sterling as well as being able to take payment via Visa, MasterCard and Amex.

The Botswana Private Mobile Safari has no fixed location; it's exclusive to your group and comes with a top professional guide. Expect comfortable camping, great food, and a superb wildlife experience wherever you decide to go.

Overlooking the Khwai River and Moremi Game Reserve beyond, Little Machaba is a classically designed camp with very comfortable tents in a great game-viewing area.