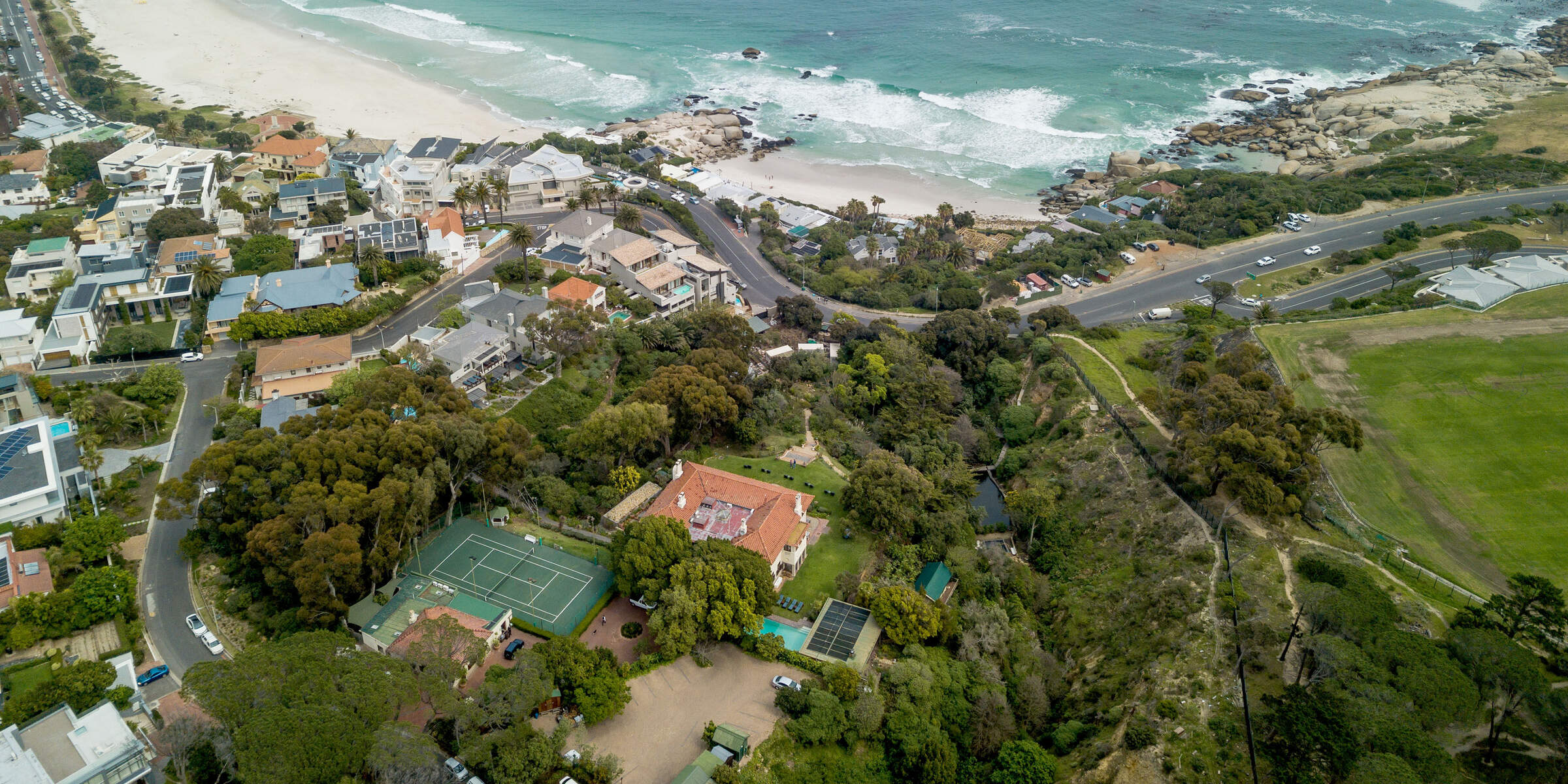 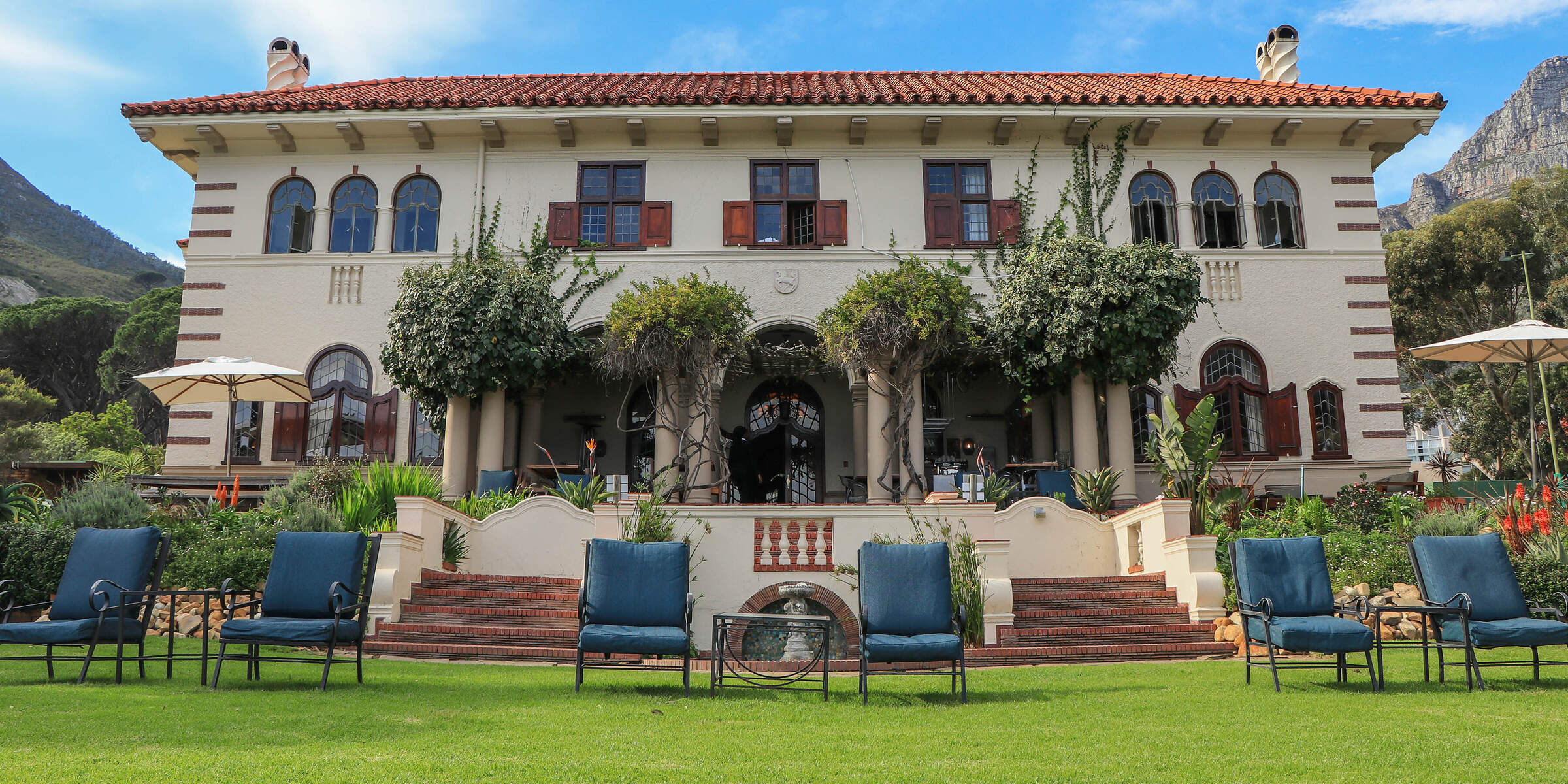 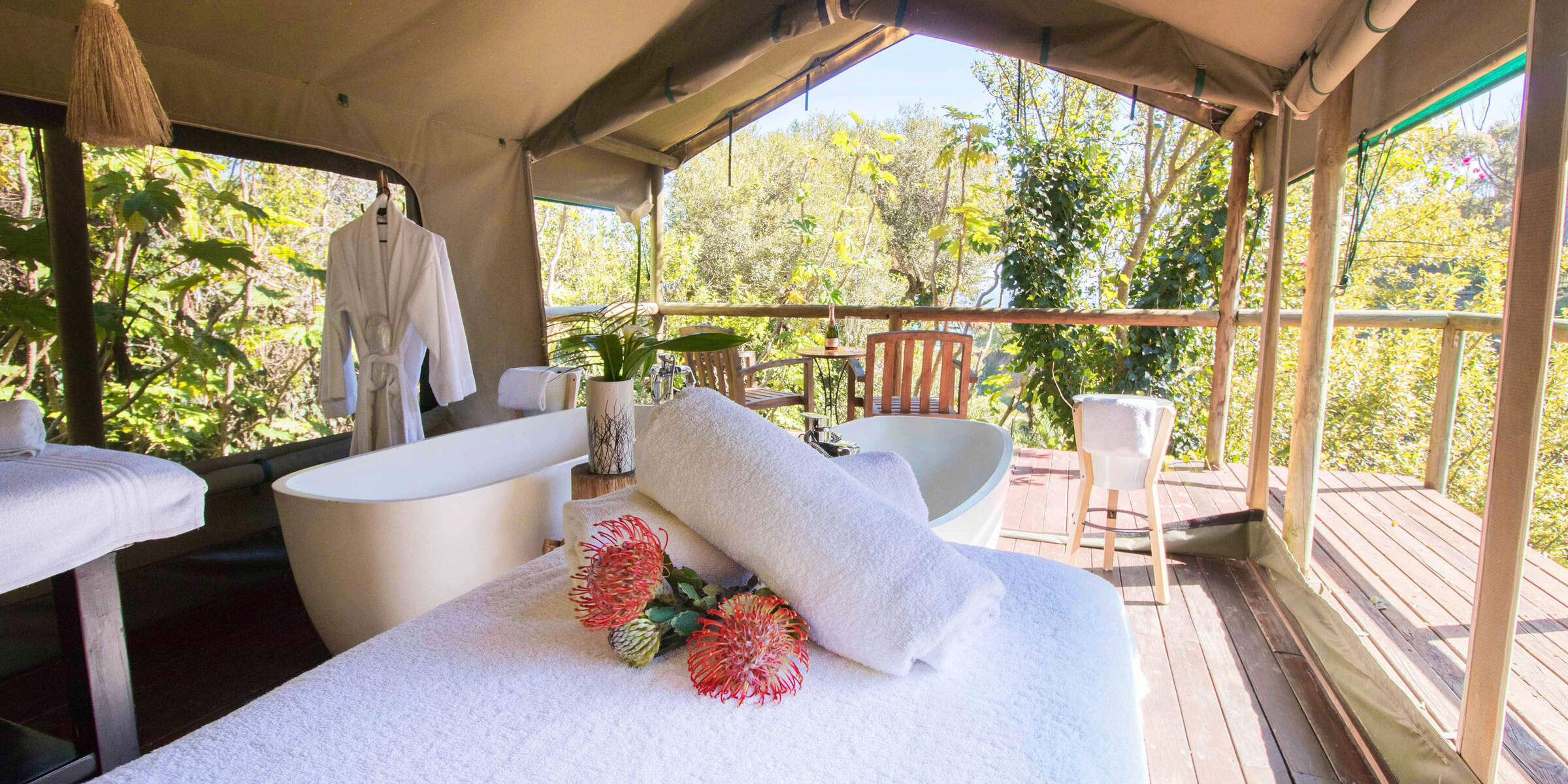 Camps Bay Retreat is a smart hotel which feels rather like a very good upmarket guesthouse.

Set on the slopes of Lion’s Head, it is spread out over a small private reserve, which covers 1.6 hectares (four acres) of lush woodlands, streams and waterfalls above Camps Bay, with beautiful views of the sea. The hotel is within a 300m walk of the seafront with its beaches, restaurants and nightlife.

Camps Bay Retreat is the sister hotel to The Bay Hotel, down on the beachfront, but is much quieter and more tranquil. Complimentary transfers are available between the two hotels, and guests are free to use the facilities of both.

The public rooms at Camps Bay Retreat are set in the elegant Earl’s Dyke Manor, which was built in the 1920s. With its striking entrance hall, high ceilings, chandeliers and dark wood-panelled walls, it has a charm that is enriched by Turkish rugs, oversized paintings and a grand piano set against white walls. When we last visited in May 2014 we thought it was magnificent; it's not difficult to imagine what it might have been like to live here in its heyday.

A log fire in the entrance hall is lit throughout the winter, much to the delight of the resident dogs at Camps Bay Retreat. From the hall, a wide wooden staircase leads up to the rooms, and doors lead off to the dining room and two reception rooms. The lounge is a quiet place, ideal to sit and read, whereas the library is more of an entertainment area, with a selection of books, DVDs, CDs and cigars. The walls are covered with books, paintings and vases, and historical items fill the rest of the room. Both rooms boast large comfortable couches, armchairs and pouffes, as well as a fireplace: welcoming, snug spots to enjoy a drink before or after dinner.
There is a lot of memorabilia and history here about the family who originally owned the house, as well as old photos on the walls of Cape Town and Camps Bay.

Accommodation options at Camps Bay Retreat vary, but its 15 rooms are located in one of three venues:,Earl’s Dyke Manor itself, with one ‘premier’ room and three suites; the contemporary seven-room Deck House, and four luxurious villa rooms. These last two are linked to the Manor House by a hanging bridge that spans a narrow ravine. All rooms in the Manor House are in keeping with the style of the house, with original features such as wooden floors, high ceilings, original doors and antique furniture, whereas rooms in the Deck House and the villas have a more contemporary feel. Although the rooms are different in style and décor, all are spacious and most have open-plan facilities (albeit with an enclosed toilet). In the Deck House, each room also has a private balcony with deck chairs.

Every room at Camps Bay Retreat has a king-size bed, or twin beds, a fully stocked minibar, satellite TV, air conditioning, international plug points, electronic safe, hairdryer, telephone and laptop facilities, and WiFi access. A DVD player comes as standard, too, with DVDs available to borrow from the library in the Manor House, and there is a small compilation of music in each room. Tea and coffee, as well as a Nespresso machine, home-made lemonade and mineral water are all complimentary.

During the winter months, meals at Camps Bay Retreat are served in the formal dining room. In warmer weather, guests may eat outside, either on the terrace, which has a bar in one corner and amazing views across the garden to the sea, or on the lawn. Exploring the garden is great; there are various different paths and walks, one leading to the vegetable garden and nursery where the Retreat grows fresh herbs and vegetables. (There's another herb garden, too, outside the kitchen on the way to the Deck House.) During the summer months guest a barbecue is held twice a week.

A winding path leads down the hillside, through the reserve, to a gate out onto the road below. This gives guests direct access onto the small Glen Beach, or the larger Camps Bay Beach which is a short walk away.

Other facilities at Camps Bay Retreat include a spa (with two treatment rooms, a steam room, sauna and spa bath), tennis court, a ‘nature tent’ in the garden with another two massage beds and views of the sea, and three swimming pools. The main pool at the Manor House is solar heated, while the mountain pool, lower down in the gardens, is usually filled with natural water from the mountain. The third pool is at the Deck House.

Camps Bay Retreat combines a peaceful setting and some old-world charm with high-quality contemporary creature comforts. Despite its quiet situation, it is only a short walk from Camps Bay Beach, and the buzzing restaurants and bars on its palm-fringed promenade. We loved its location and views!

Location
Cape Town, South Africa
Ideal length of stay
We'd use this for a minimum stay of 3 to 4 days, and perhaps for longer if time permits.
Accessible by
Self-drive or Fly-and-Transfer

Usual board basis
Bed & Breakfast
Food quality
On our most recent visit to Camps Bay Retreat, in May 2014, we did not eat here, but this is what we experienced on a previous trip.

Breakfast is usually served between 7.00am and 11.00am. We chose the French toast tower – traditional French toast layered with cheese, bacon and a drizzle of maple syrup.

We did not have lunch, and the menu changes daily, but at the time of our visit, choices included beetroot salad, duck confit salad and octopus salad; a selection of sandwiches; mains of beef burger, beef fillet, rabbit, sea bass, linguine with prawns or quiche of the day; and a selection of desserts.

Dinner is served between 7.00pm and 9.30pm and is usually from an à la carte menu, which again changes daily. We started with stuffed calamari with cream cheese mousse, followed by beef fillet served with pomme dauphine, rocket sauce and roast vegetables. To round it off we had vanilla pannacotta with a berry coulis for dessert.

Beach holidays
Camps Bay Retreat is set within a short walk of three stunning beaches – Glen Beach, Camps Bay & Clifton. Beside this, it has three outdoor swimming pools, so you are spoilt for choice to create a best beach holiday experience.
See ideas for Beach holidays

Attitude towards children
Children 12 years and older are welcome in the Manor House. Children of all ages are welcome at the Deck House and Villas.
Special activities & services
The Camps Bay Retreat has their own qualified child minder. The cost for this service is R120 an hour (approximately £7 an hour). The tennis court and swimming pool are an attraction for older children.
Equipment
Cots and high chairs are available.
Generally recommended for children
Camps Bay Retreat is an old historic building with lots of antiques and is not suitable for younger children. We recommend it for older children from about 8 years.
Notes
Young children need to supervised by their parents. There is a swing bridge across a steep gorge between the Manor House and the Deck House. The gardens are steep and the pathways uneven.

Communications
Each room has a direct-dial telephone. Fax, printing and photocopying services are also available. WiFi is available throughout the property. There is also a guest computer in the library where guests can make use of the complimentary internet facilities.
TV & radio
Each room has an 18-channel satellite TV.
Water supply
Mains

Camps Bay Retreat is the ideal setting for a peaceful and serene break. Located on a private green nature reserve with incredible views overlooking the Atlantic Ocean and waterfalls around the sanctuary, the Retreat is renowned for its unusual welcoming from their resident dogs. Guests are later accompanied on a forest walk of the area where a happily wagging tail instils both a feeling of safety and familiarity.

The forest in the Retreat has been boosted with the plantation of 100 new trees. The project aimed to increase the density around the beautiful Skywalk Trail which will increase its biodiversity, hence leading to a growth in the indigenous species of the region. This is an important aspect for the Hotel’s private nature reserve due to its connection to the Glen Forest and Table Mountain National Park. Some of the replacement indigenous trees are known for traditional natural remedies (spiritual cleansing and curing ailments) and are replacing the more invasive trees. Some heavy water-using trees such as the Eucalyptus tree contribute to the water crisis in South Africa and others present a significant fire risk such as Gum trees. Planting new indigenous species contributes to the protection of the local eco-system and the aesthetics of the retreat, thus creating a relaxing environment for those looking to escape their daily routine and unwind.

Malarial protection recommended
No
Medical care
The closest doctor is in Camps Bay, about 10 minutes away by car.
Dangerous animals
Security measures
The property is fenced and gated and there is 24-hour security at the front gate.
Fire safety
Each room is fitted with a fire detector and fire extinguishers are dotted throughout the property.

Disabled access
On Request
Laundry facilities
A same day service is available Monday to Sunday. Prices are from R15 – R65 per item for a wash, dry and iron. (£1 - £4)
Money
Each room has an electronic safe. Foreign currency exchange is available at The Bay Hotel, by prior arrangement. There are banks located nearby.
Accepted payment on location
Amex, Diners Club, MasterCard and Visa cards are accepted. Cash payments may be made in SA rands.

Other lodges in Cape Town

In the quiet, leafy suburb of Newlands, the sophisticated Vineyard Hotel has close access to smart shops, sports facilities and the main sights of Cape Town.

Against the awe-inspiring backdrop of Table Mountain, Acorn House offers a traditional guesthouse welcome in a historic setting.

Four Rosmead is a comfortable, very friendly guest house located very close to the city centre and all its nearby attractions.

Located on one of Cape Town's best beaches, the Long Beach is a great place to relax and explore, although it is further from the city than many other hotels and guesthouses.

The Cape Grace is set in the centre of Cape Town's Victoria and Alfred Waterfront. It's a perfect base for those wanting to be close to restaurants and shops.

Cellars Hohenort is a luxury hotel set in stunning gardens. Situated in the wine-growing Constantia Valley it is not far from many of Cape Town's attractions.

The contemporary and comfortable Hotel Verde, within a stone’s throw of Cape Town International Airport, has a strong focus on sustainability and the environment.

On the beachfront at Camps Bay, the Bay Hotel has luxury 5-star amenities, plus close access to one of Cape Towns best beaches as well as lots of restaurants, bars and nightlife.

Mount Nelson Hotel is Cape Town's oldest and most famous hotel. It's a place to be seen and the best address for a delicious afternoon tea.

The welcoming Twelve Apostles Hotel has a great location overlooking the ocean, just a short drive to the beach and restaurants of Camps Bay.