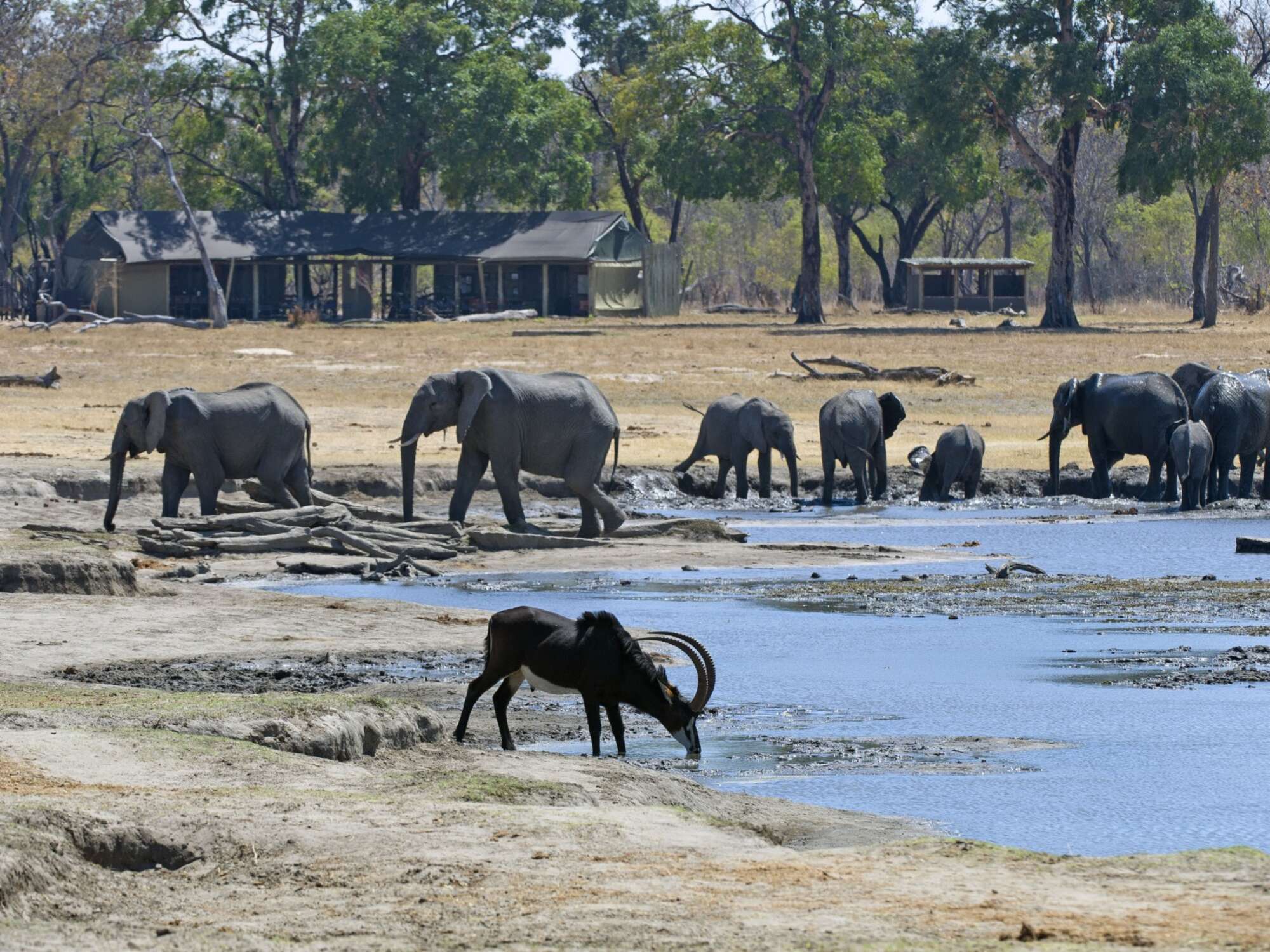 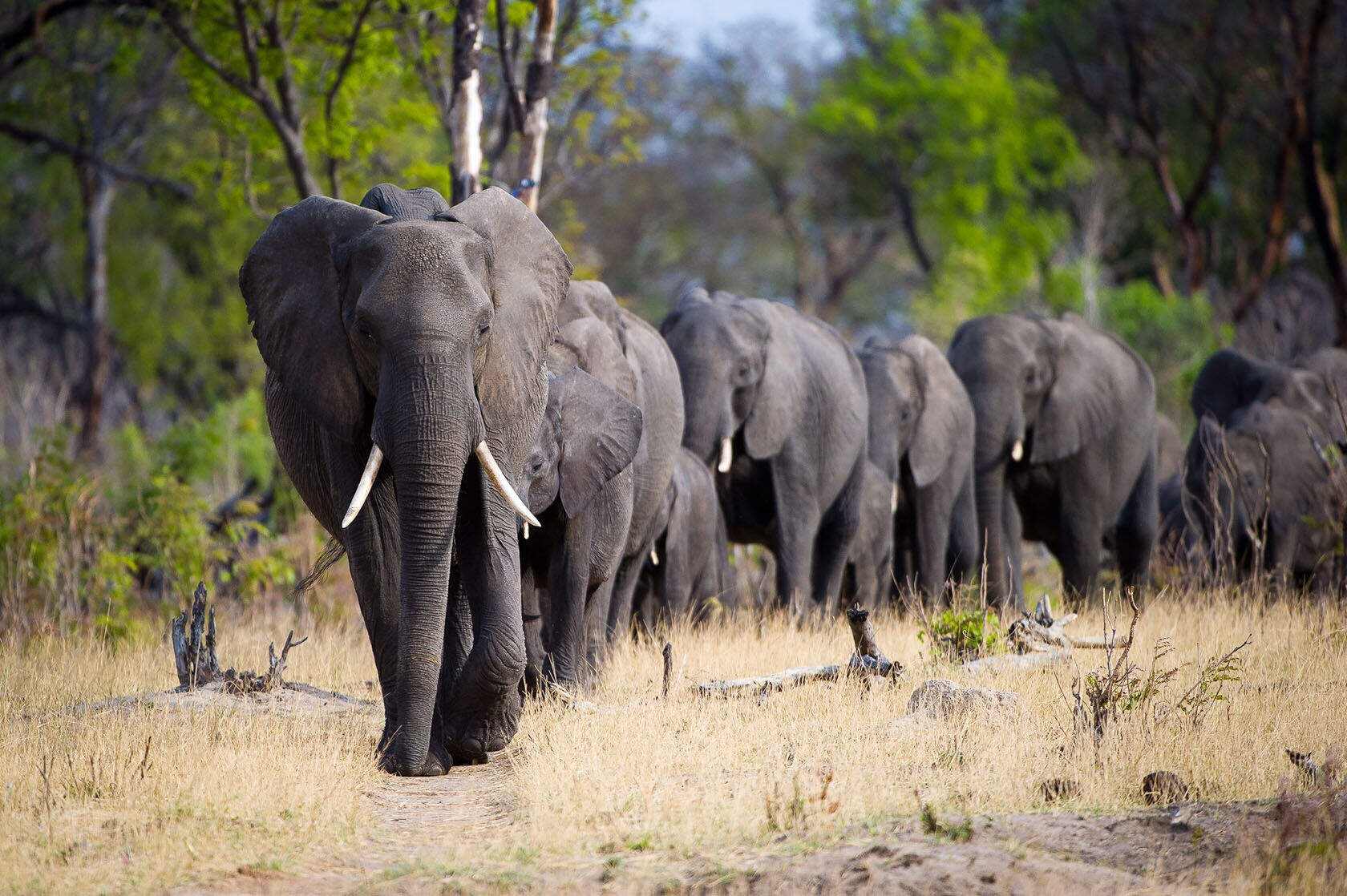 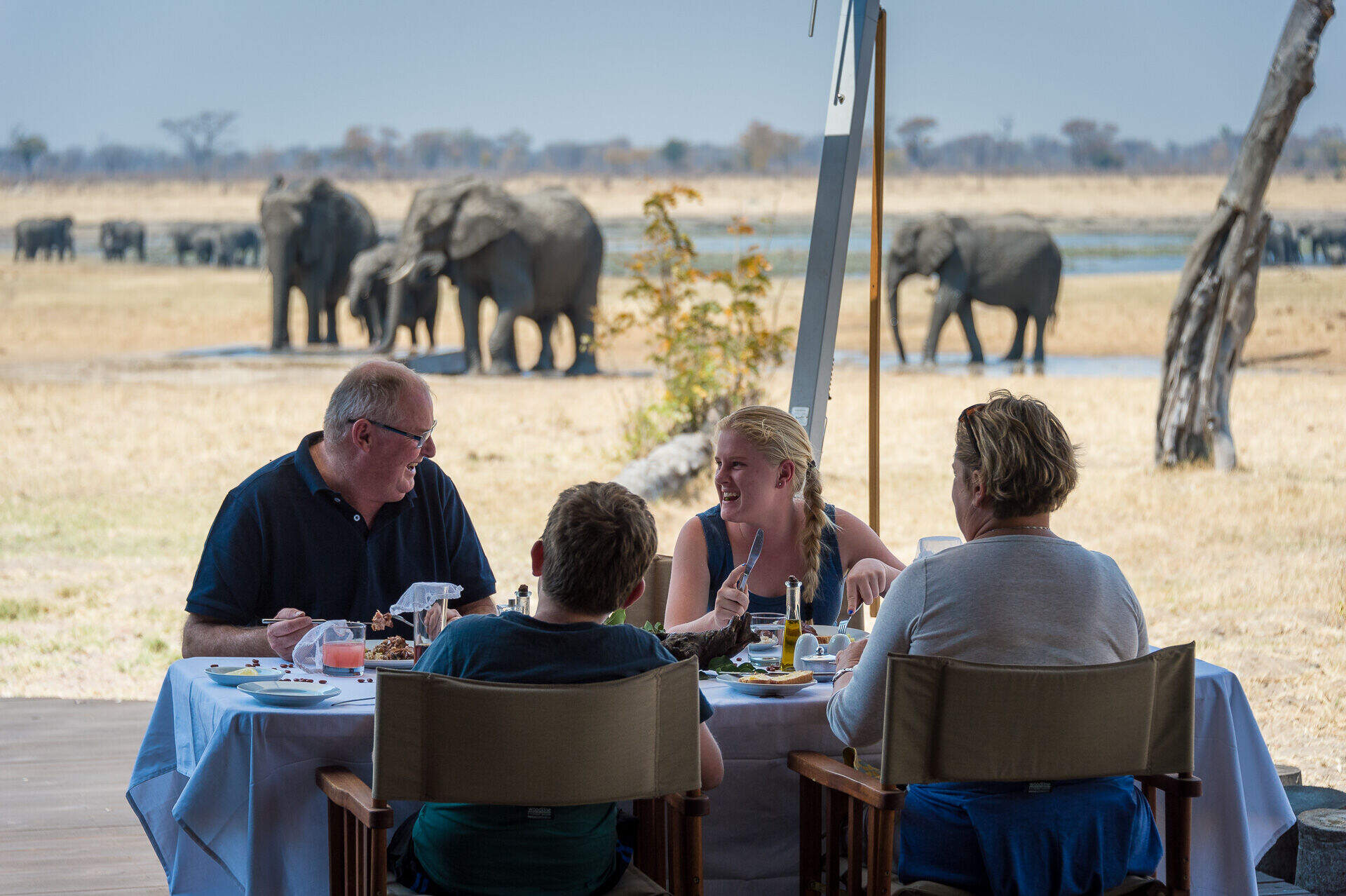 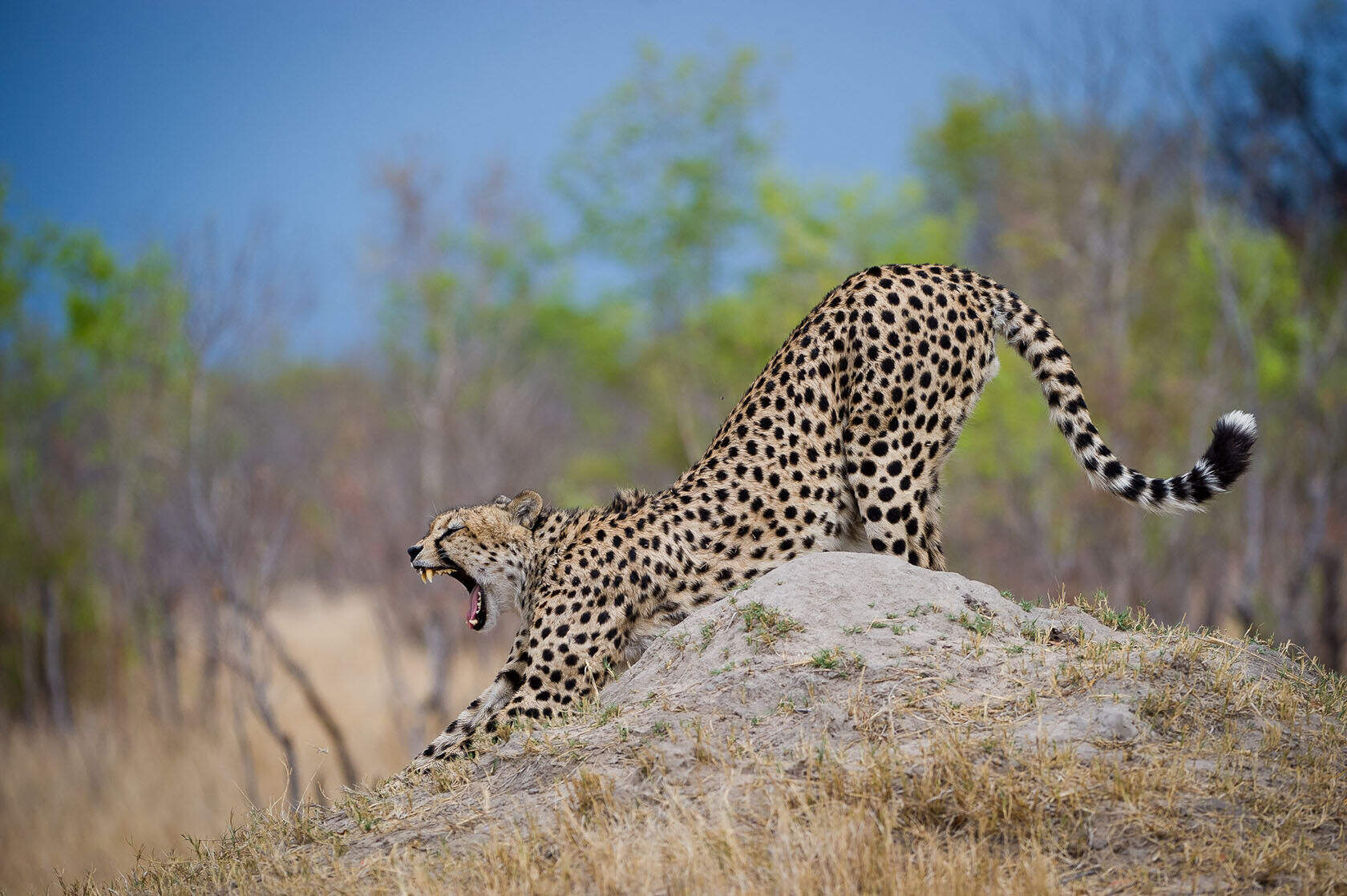 8 independent comments and wildlife information from our travellers who have visited Davison's Camp and kindly agreed to share their thoughts. They do not necessarily represent the views of Expert Africa

3 nights Arrived 10 Sep 2018
"Great location which draws very many animals to the pan. Also excellent area with wide range of wildlife which could be viewed close up.

Surprise for us was the single room with toilet and shower etc. incorporated into the bedroom. The design of the Camp Hwange huts was so much better." See all these reviews: 13n in Zimbabwe
Experience Report
Overall Rating:
Excellent
Location:
Excellent
Service:
Good
Activities:
Excellent
Rooms:
Average
Food:
Excellent
Facilities:
Excellent
Sightings Report

"Nice camp, but not what we expected"

3 nights Arrived 5 Sep 2018
"We stayed in the family cabin. It was big, but we found it awkward because the toilets and showers aren't screened, and there is no privacy between the two rooms. We moved curtains from the windows to provide some screening. It would have been fine if our kids were younger, but with two young adults, it really wasn't okay. The tent was also the furthest away from the dining/central area, along a soft sand path.

The camp staff were very friendly and responsive, and the other guests were raving about it, but coming to it from Mwaleshi and Tafiki, our expectations were high, and we were disappointed.

We'd seen a lot of game in Zambia, including lion and leopard, so we were interested in the lesser animals, like the eland, sable, ostrich etc. At Davisons our family of four had to share a vehicle with two or three other people, and our guide was very focused on finding us the BIG game. We spent a lot of time driving, and not a lot of time 'seeing'.

Having come from Zambia, where game drives/walks are led by a guide, a scout AND a tea bearer, it was a shock to just have a guide driving, spotting and guiding. We felt this was detrimental to the experience and probably wouldn't return for this reason." See all these reviews: 8n in Zambia; 3n in Zimbabwe
Experience Report
Overall Rating:
Average
Location:
Average
Service:
Excellent
Activities:
Average
Rooms:
Average
Food:
Good
Facilities:
Good
Sightings Report

3 nights Arrived 23 Jan 2017
"Davidsons camp proved to be some thing of a mixture for us, the location in high season must be unique, however we felt the travelling involved could be quite challenging the driving at times left you hanging on to your seat. Probably did. Not help other guests did not rotate seating positions leaving us to finally request a vehicle to our selves to avoid travelling apart. The staff were very obligingl and friendly but after the feminiine touch at. The hide maybe we were a little spoiled." See all these reviews: 10n in Zimbabwe
Experience Report
Overall Rating:
Good
Location:
Excellent
Service:
Good
Activities:
Good
Rooms:
Good
Food:
Good
Facilities:
Good
B family
Guildford

"A perfect place from which to see game"

3 nights Arrived 30 May 2016
"In two and a half days we saw an amazing amount of wild life: numerous elephants, giraffes, various antelopes, zebra, African wild dogs. But particularly special was seeing two lionesses stalking a herd of buffalo and making a kill, then seeing the male lion come to join the meal. Subsequently we saw the cubs being brought to the kill.

Two mornings later we got to within about 20 metres of the whole pride of lions feasting on a freshly killed buffalo - the male, 5 females, 7 cubs and a young male who was kept at a distance. We sat in the Land Rover watching for good ten minutes before making way for arrivals from another camp.

We were immensely impressed by the quality of the guides although for the most part we had the same one all the time which was a nice touch. Their knowledge and bush craft was humbling.

In the camp the staff were first class: welcoming, friendly and helpful. The food was excellent. The tented chalets were of a high standard, clean, comfortable and well appointed. I had not expected to find that the camp is on mains electricity, so my solar charger for laptop, camera batteries etc was redundant.

The only criticism I have, and it came to light subsequently, is that Wilderness Safaris, who run Davison's Camp and from whose airstrip in Hwange we flew to Mana Pools, will not allow other safari camps to use 'their' airstrip in Mana Pools even though the land is owned by the National Park. Because of that we had a two hour drive over rough tracks to/from the other operational airstrip in Mana Pools instead of a 20 minute one. It seemed an unhelpful and short-sighted policy." See all these reviews: 10n in Zimbabwe
Experience Report
Overall Rating:
Excellent
Location:
Excellent
Service:
Excellent
Activities:
Excellent
Rooms:
Excellent
Food:
Good
Facilities:
Good
Mr H
Switzerland

The Camp is were well set and the Host/Staff/Guides are all very welcoming and it was just awesome to stay there. Also the Location is quite nice and a very good start to the Wilderness Concession in the far South of the Hwange NP. Very nice and easily to reach is the Ngamo Pan, which was very stunning from a landscape sight and also in terms of Game. Big herds of Wildebeest, must have been hundreds, Giraffes, Zebras and big herd of Eland as well!

3 nights Arrived 15 Jun 2014
"All good enjoyed all of it.
star map and telescope would be awesome as night sky amazing.
all good, guides interesting and well informed.
small points..on the transfer back to Vic falls it might be nice to stop in a village ( pre organised) for a cup of tea and see what local village life is like, also to know more about CAMPFIRE and other programmes to work with locals. Also rich westerners like us could contribute more to that eg by donating binos, or money to the childrens projects which are so crucial for the long term preservation of wild areas." See all these reviews: 9n in Zimbabwe
Experience Report
Overall Rating:
Excellent
Location:
Excellent
Service:
Excellent
Activities:
Excellent
Rooms:
Excellent
Food:
Excellent
Facilities:
Excellent
Mr & Mrs K
Maidstone

2 nights Arrived 5 Nov 2011
"A typical good and well run camp as one would expect from the Wilderness group. Not one of their more expensive locations, so it was good value for money.

Management were able to respond well to certain requests when we had particular requirements.

On the game drives we had to travel frequently through a part of the Park which had little animal activity but we did not lose out on the total amount of time spent in the more interesting parts of their territory as the game drives gave plenty of time in the areas where animal activity was greater." See all these reviews: 8n in Zimbabwe; 1n in South Africa
Experience Report
Overall Rating:
Good
Location:
Average
Service:
Good
Activities:
Average
Rooms:
Average
Food:
Average
Mrs M
Luxembourg

"to short to really enjoy"

1 night Arrived 8 Sep 2011
"My stay at Davison`s Camp has been to short to give a profound feedback. The tents are nice, the food, as one would expect of a Wilderness camp, was excellent and the game very good.

I talked to other guests who had spent several days here ,and they all were full of praise." See all these reviews: 10n in Zimbabwe
Experience Report
Overall Rating:
Excellent
Location:
Excellent
Service:
Excellent
Activities:
Excellent
Rooms:
Excellent
Food:
Excellent
Facilities:
Excellent
Showing 1-8 of 8
90%
8 reviews of Davison's Camp by travellers since August 2007
Overall rating by our travellers
5
2
1
0
0
Filter by month