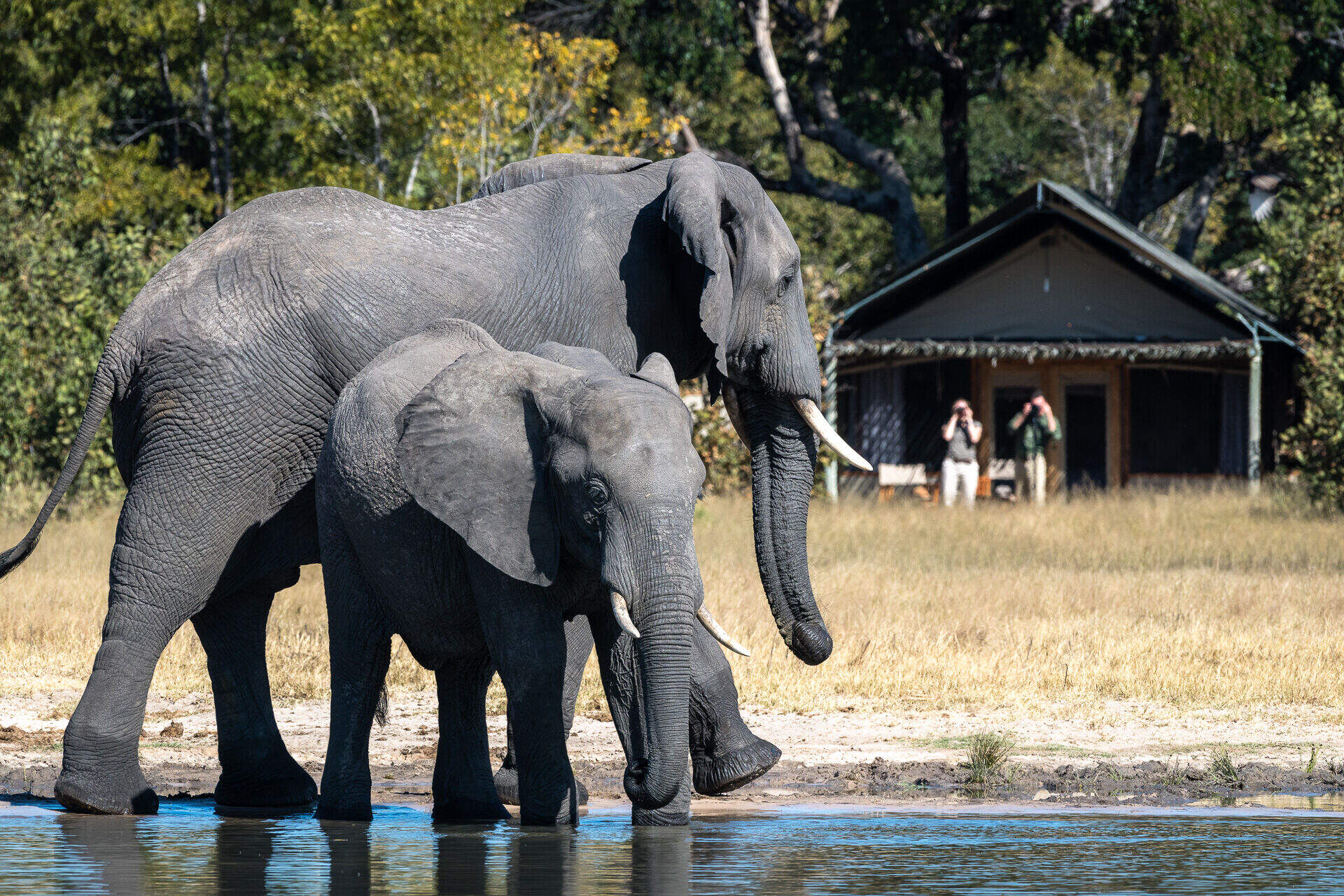 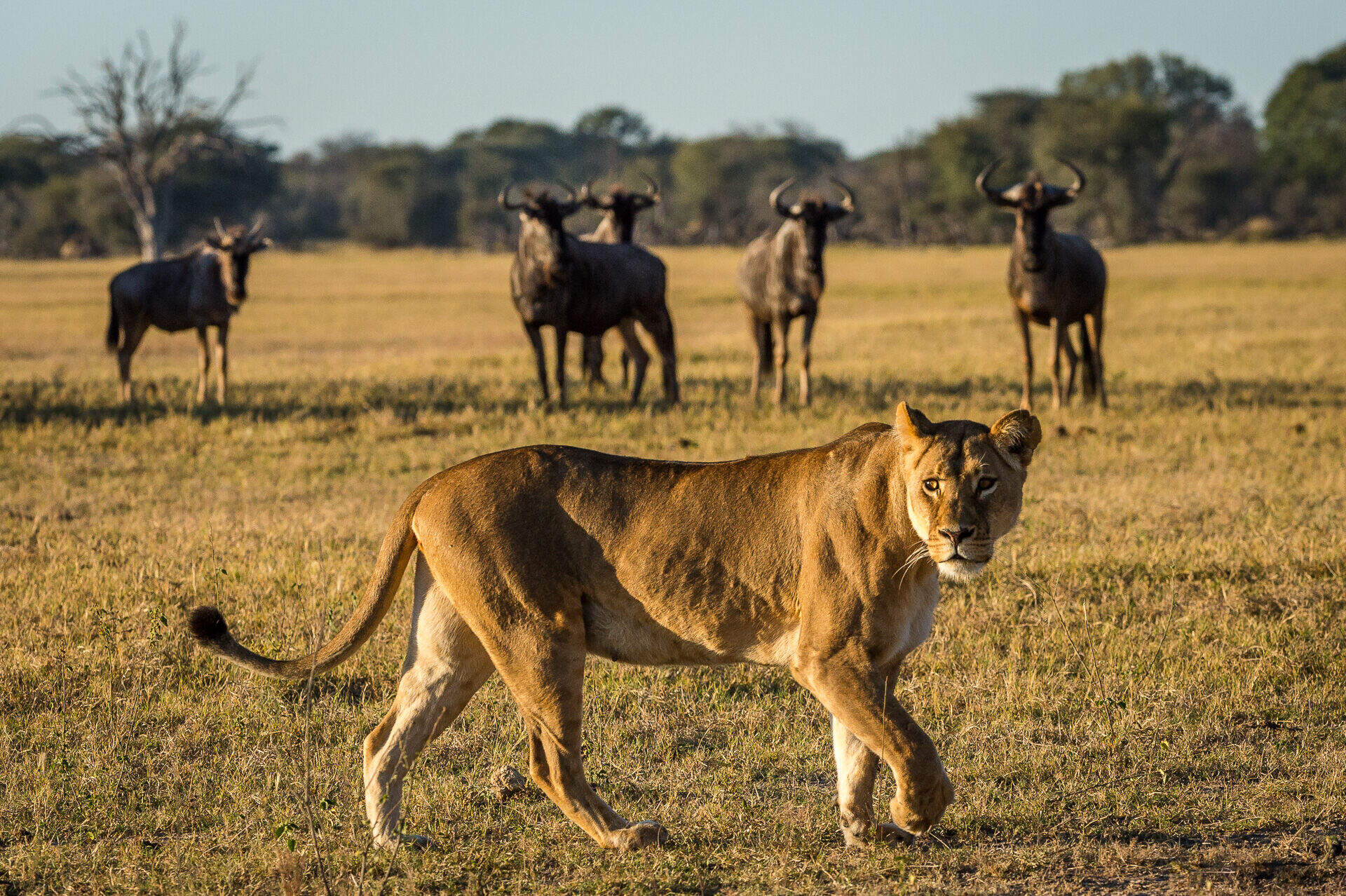 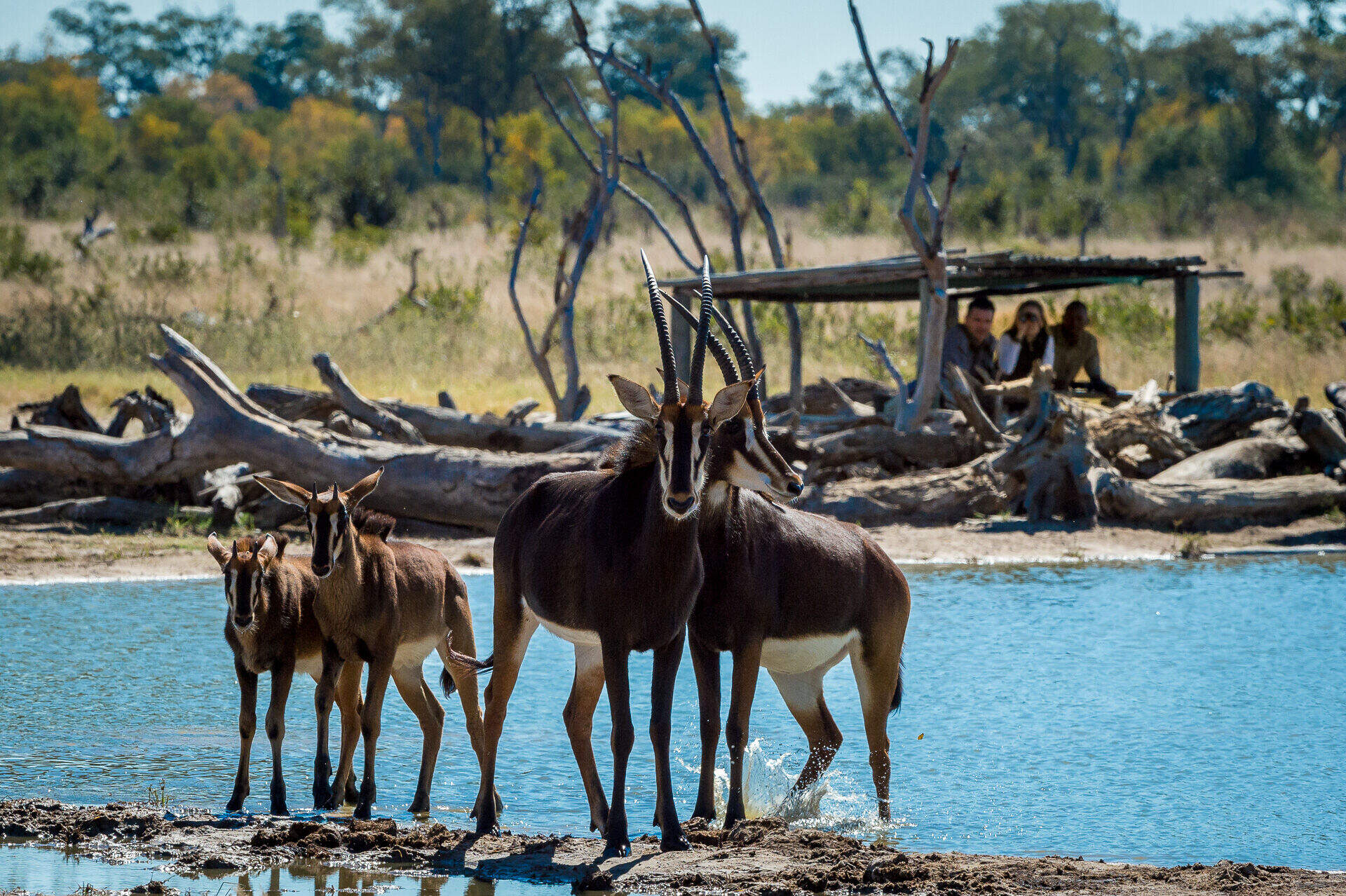 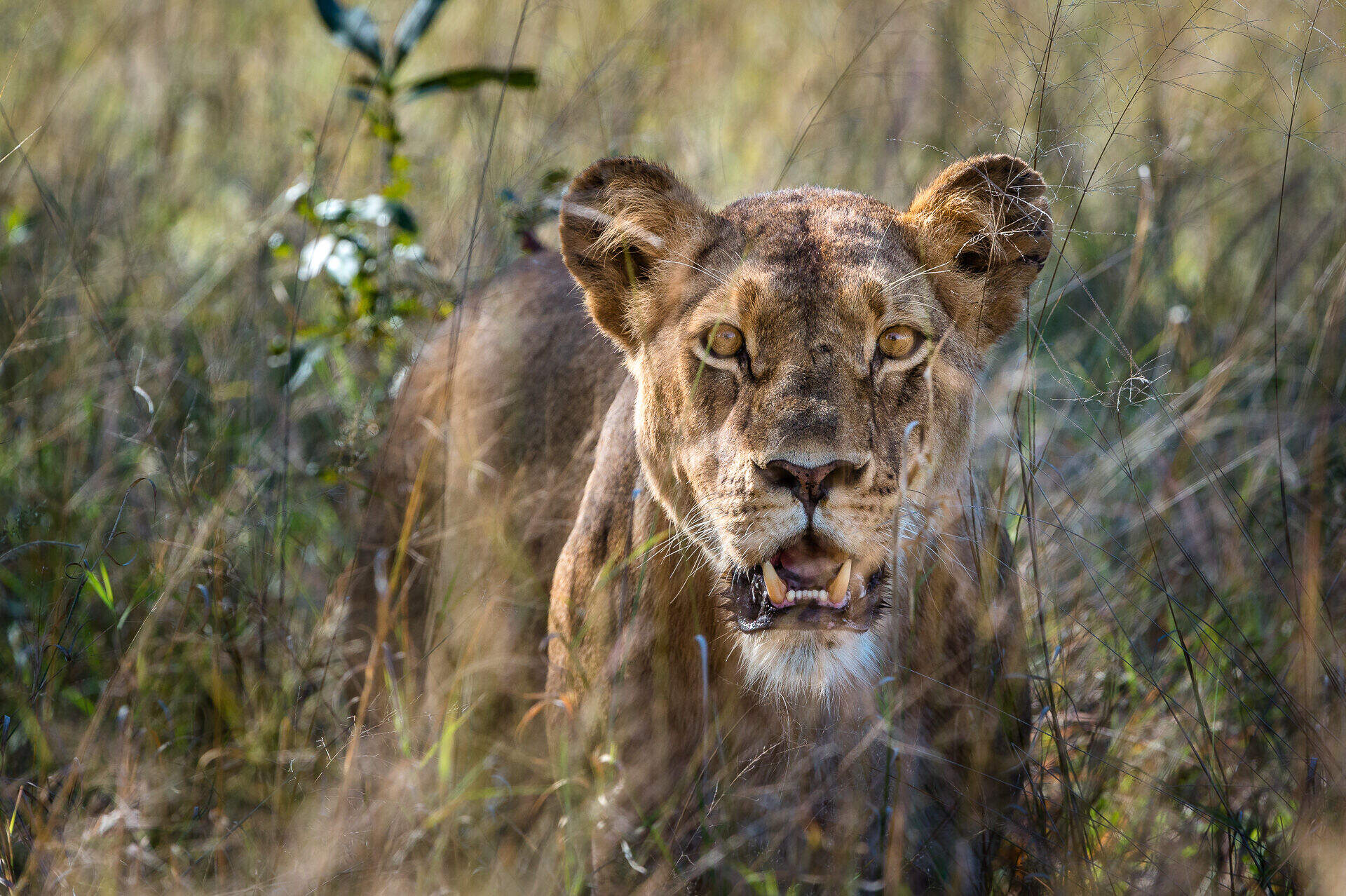 18 independent comments and wildlife information from our travellers who have visited Little Makalolo Camp and kindly agreed to share their thoughts. They do not necessarily represent the views of Expert Africa

3 nights Arrived 9 Nov 2019
"This was an exceptionally well run place in every respect, despite the heat and drought. The standards are high and the quality of the place shone through.

We had a really excellent guide, Leo(!) and all the camp staff were most charming and helpful. The highlight, once again for us, was a visit at breakfast time of a small pack of wild dogs, three adults and six pups, to feed on a dead elephant who had died overnight just in front of camp.

We watched them for 90 minutes and were delighted to observe them at such close quarters. We had some excellent game drives and saw leopard, bush baby, genet and, finally , eland to add to our tally overall." See all these reviews: 8n in Zimbabwe; 7n in Botswana; 7n in South Africa
Experience Report
Overall Rating:
Excellent
Location:
Excellent
Service:
Excellent
Activities:
Excellent
Rooms:
Excellent
Food:
Good
Facilities:
Excellent
Sightings Report

Visit to the local village was insightful and rewarding" See all these reviews: 13n in Zimbabwe
Experience Report
Overall Rating:
Excellent
Sightings Report

3 nights Arrived 1 Jul 2019
"Again very knowledgeable guide, making our game drive interesting. Guides keep in touch with each other radioing when something interesting to be seen. eg Lions.

3 nights Arrived 9 Jul 2016
"Little Mak is a very comfortable camp with just six tented chalets set in a semi-circle around a watering hole which is frequented regularly by a variety of wildlife especially elephants. Each of the tents are well laid out with indoor and outdoor showers facilities. The hot water is generated by solar panels and is extremely effective although it does take some considerable time for the hot water to appear at the taps.

The detailed report on the EA website is very comprehensive and accurately covers all aspects of the layout of the accommodation and the camp itself.

Dickson, our guide for the duration of our stay, was extremely knowledgeable and managed to find lions plus cubs on our first day in camp who were fantastic to watch. Hwange is noted for its large elephant population and we often felt that they were all at Little Mak. We spent part of an evening game drive sitting in the log pile in front of the watering hole totally surrounded by at least five or six family groups totalling well over 60, including a number of very young calves. The interaction of the young as they tried to emulate their older siblings was fascinating.

Sundowners at another watering hole, again surrounded by elephants was another highlight, especially as they walked right past us, totally disinterested in our vehicle or us, in order to get to the water.

Dickson also managed to find a cheetah on a hunt during our transfer to Camp Hwange by road, as well as annoying a hippo who seemed to take an instant dislike to our vehicle and decided to charge!!. Hippos run quite fast it would seem!!

There are a couple of points we would make regarding the camp. EA states that dining style is group meals, however that appears to no longer be the case as we were seated at separate tables for our entire stay, and as the camp was far from full, this made for a somewhat isolated experience. All the camps we have visited over the years have used communal dining and this is an aspect that we always enjoyed. I don’t know if this a recent departure for Wilderness Safaris however we were disappointed by this aspect of the camp. Something they might want to reconsider.

The other point we would make is that due to the camps location you have to spend approximately 20 mins driving through dense mopane forest before reaching any of the more open areas where wildlife can be easily seen and tracked. It’s not a major issue but an aspect that needs to be taken into consideration during game drives

3 nights Arrived 13 Mar 2016
"An absolut wonderfull Camp, quite upmarket. The Staff and especially the guiding of Charles were absolutely brilliant. Definately one of the best Guides I've had so far.

All activities have been on a vehicle. Sightings were absolutely thrilling, wouldn't have expected that much in terms of quantity and quality of Game sights. Lions everywhere, Cheetah, Elephants, Zebras, Giraffes. Birding was great, i was able to tick down 100 species in this trip. Great luxurious Camp.

Highly appreciated their luxury Safari vehicles, 2 single seats in a row and in the middle a box to take care of my photographic equipment.

"Little Mak - never to be forgotten"

4 nights Arrived 7 Nov 2015
"Another well run Wilderness camp - this time our visit was made by our guide, Eustace. We would rate him as among the top 5 guides we have encountered over very many safaris in southern Africa. He is charming, very knowledgeable, has such a keen sense of the bush that he knows before it happens that something wonderful is about to occur (even if we did spot the wild dog before him!).

3 nights Arrived 23 Sep 2015
"We drove to Little Makalolo from Vic Falls and were met at Hwange Main Camp by our guide, Eustace, who set the stage for the most enjoyable stay at this wonderful camp. All of the staff were friendly, efficient and obviously very happy to be part of the team and they made us feel like family. The smiles, the humour, the knowledge and the desire to make our stay as good for themselves as it was for us was just brilliant. The food quality, service and the clean rooms completed the perfect stay.

Eustace proved to be a superb guide and we were able to quickly establish a wonderful personal rapport which enhanced our shared experiences of the flora and fauna.

Elephant viewing was just amazing and we had great sightings of lion, eland, sable and many other animals both large and small as well as lots of birds.
Pumped waterholes create great wildlife viewing, especially Elephant, but it will be interesting to see how the vast overpopulation of these gentle giants can be controlled to preserve Hwange." See all these reviews: 11n in Zimbabwe
Experience Report
Overall Rating:
Excellent
Location:
Excellent
Service:
Excellent
Activities:
Excellent
Rooms:
Excellent
Food:
Excellent
Facilities:
Excellent
C
Boston

2 nights Arrived 21 Jul 2015
"Loved everything about the camp. The entire staff was so friendly starting the moment we arrived at the airstrip - cool towel, cooler of beverages and animal spotting before we even arrived at camp. Once we got there, a warm towel, a welcome cocktail and 5 or 6 gentlemen greeting us, taking our bags, getting us settled and getting us out to see wildlife. Our guide, Mike (or Miiiiiiiike as we all called him) was AMAZING, not just knowledgeable which is obviously a requirement for the job, but charismatic, fun and flexible, always trying to accommodate what we wanted to do/see.

The rooms were wonderful, including the charming loo with a view and the outdoor shower. The only downside was that warm and cold water in the sink came from 2 different taps, so getting "warm" water was a challenge. But I loved the "water babies" that were put on our beds every night to keep us warm (and also in the jeeps in the morning).

When there were questions/issues with our departure time from the camp they were great about trying to work it all out, never getting frustrated and always keeping us informed.

The log house by the watering hole was an amazing experience, the food was delicious and the conversation around the firepit after dinner was great. I would highly recommend this place to anyone wanting a great safari experience." See all these reviews: 7n in Zimbabwe; 3n in South Africa
Experience Report
Overall Rating:
Excellent
Location:
Excellent
Service:
Excellent
Activities:
Excellent
Rooms:
Excellent
Food:
Excellent
Facilities:
Excellent
Mrs B
Oxon

2 nights Arrived 18 Oct 2013
"Has the advantage of being a small camp which enables staff to give good levels of personal attention." See all these reviews: 8n in Zimbabwe; 2n in Botswana; 1n in South Africa
Experience Report
Overall Rating:
Good
Location:
Good
Service:
Excellent
Rooms:
Good
Food:
Good
Showing 1-10 of 18
12
Next
99%
18 reviews of Little Makalolo Camp by travellers since August 2007
Overall rating by our travellers
17
1
0
0
0
Filter by month