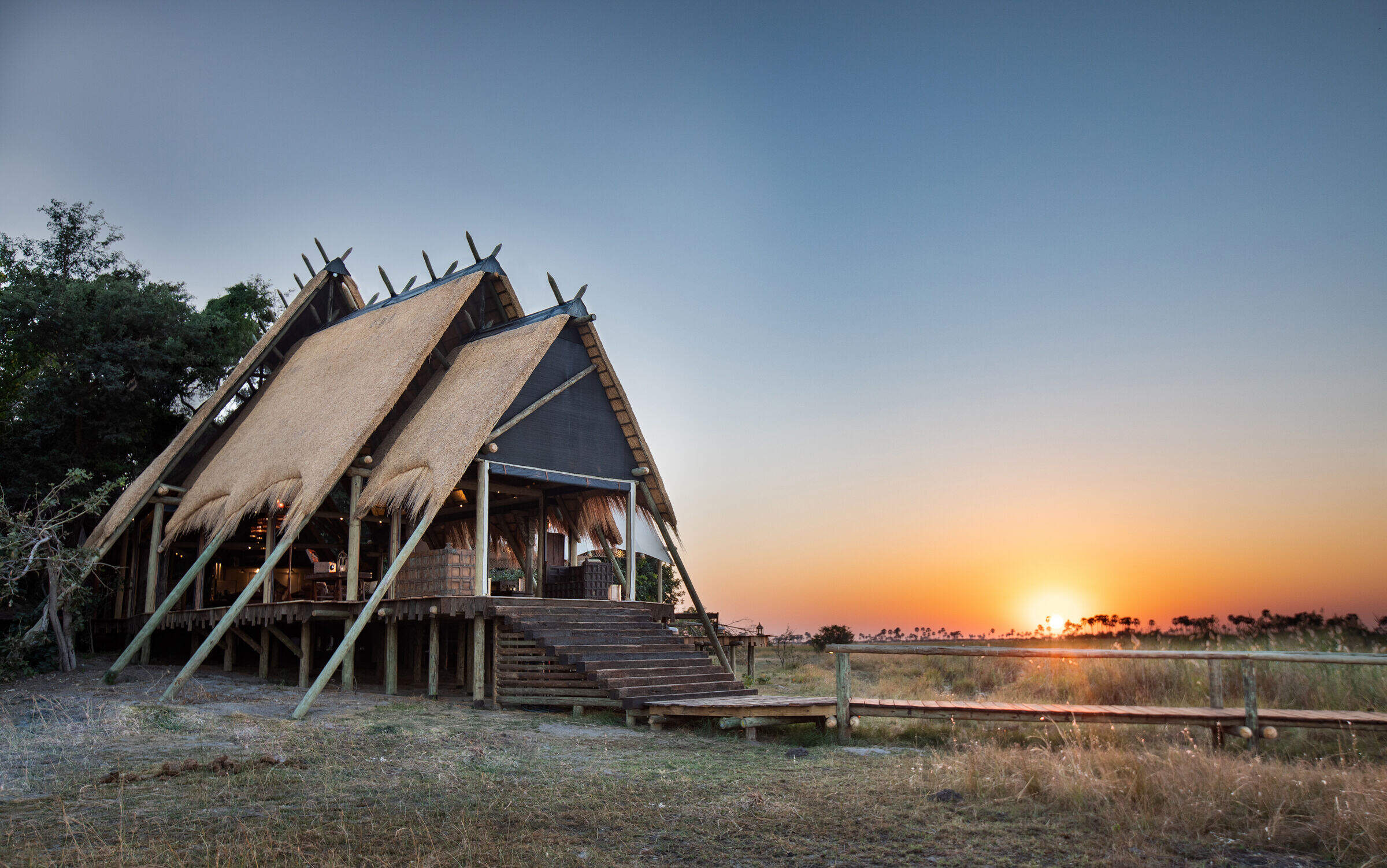 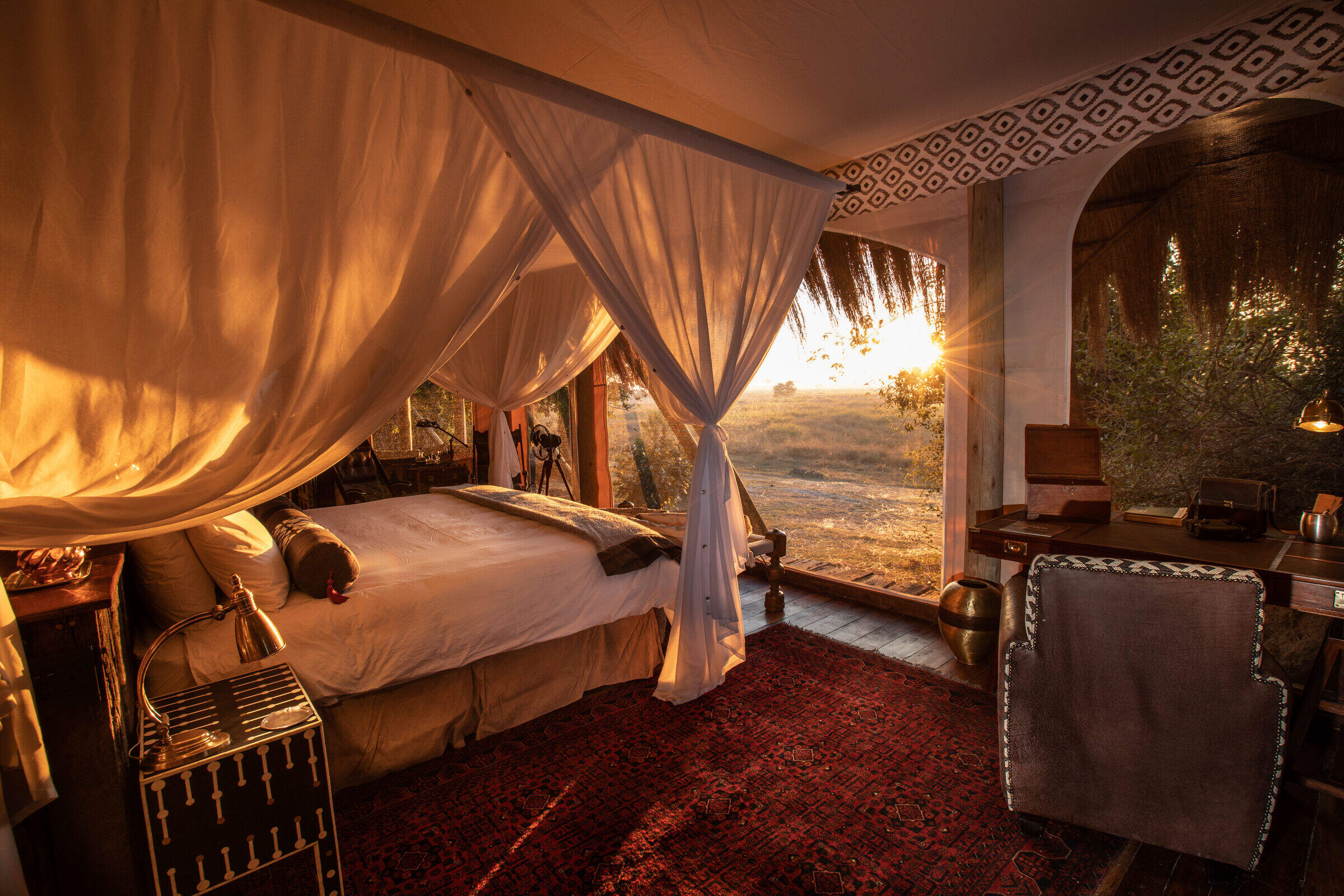 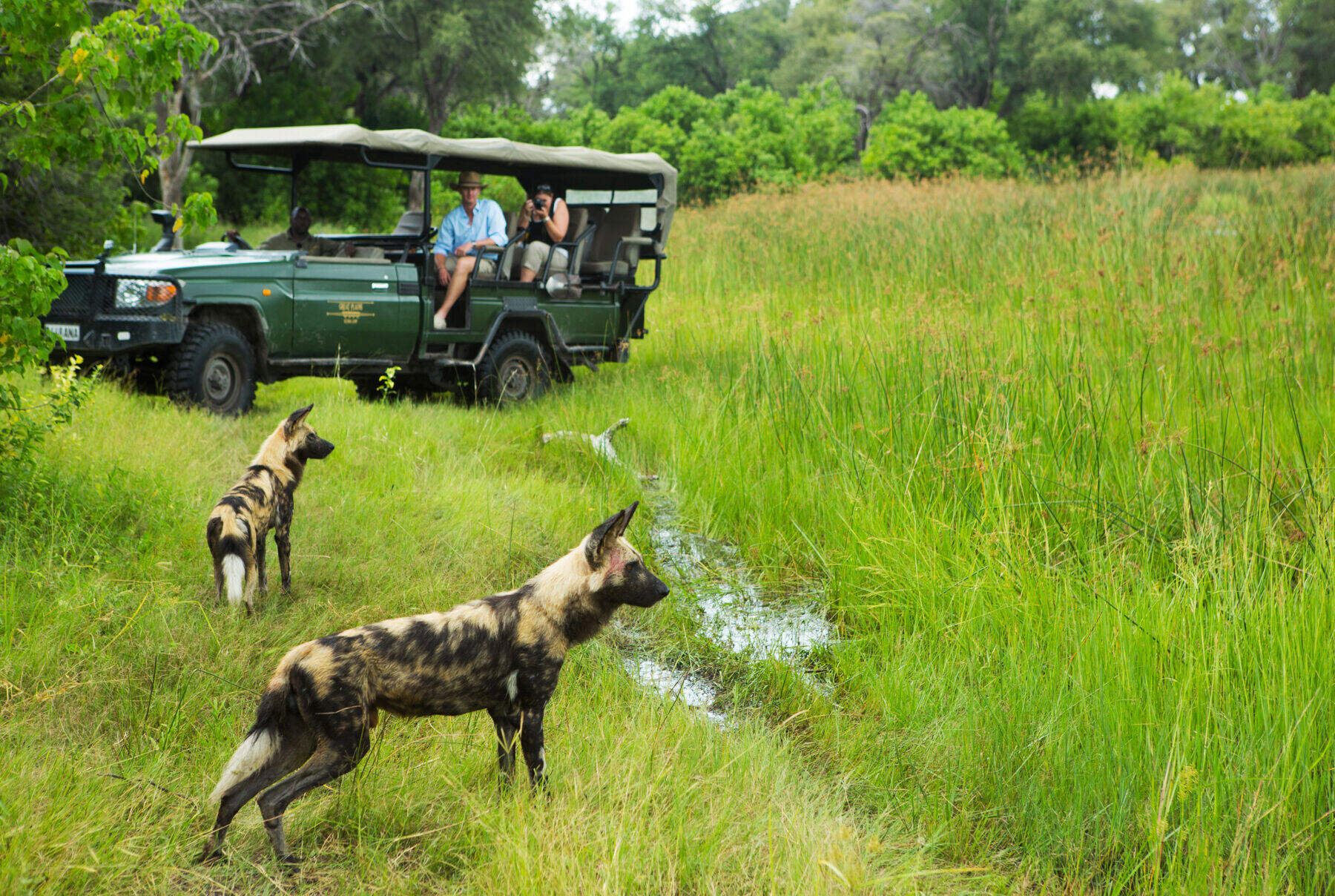 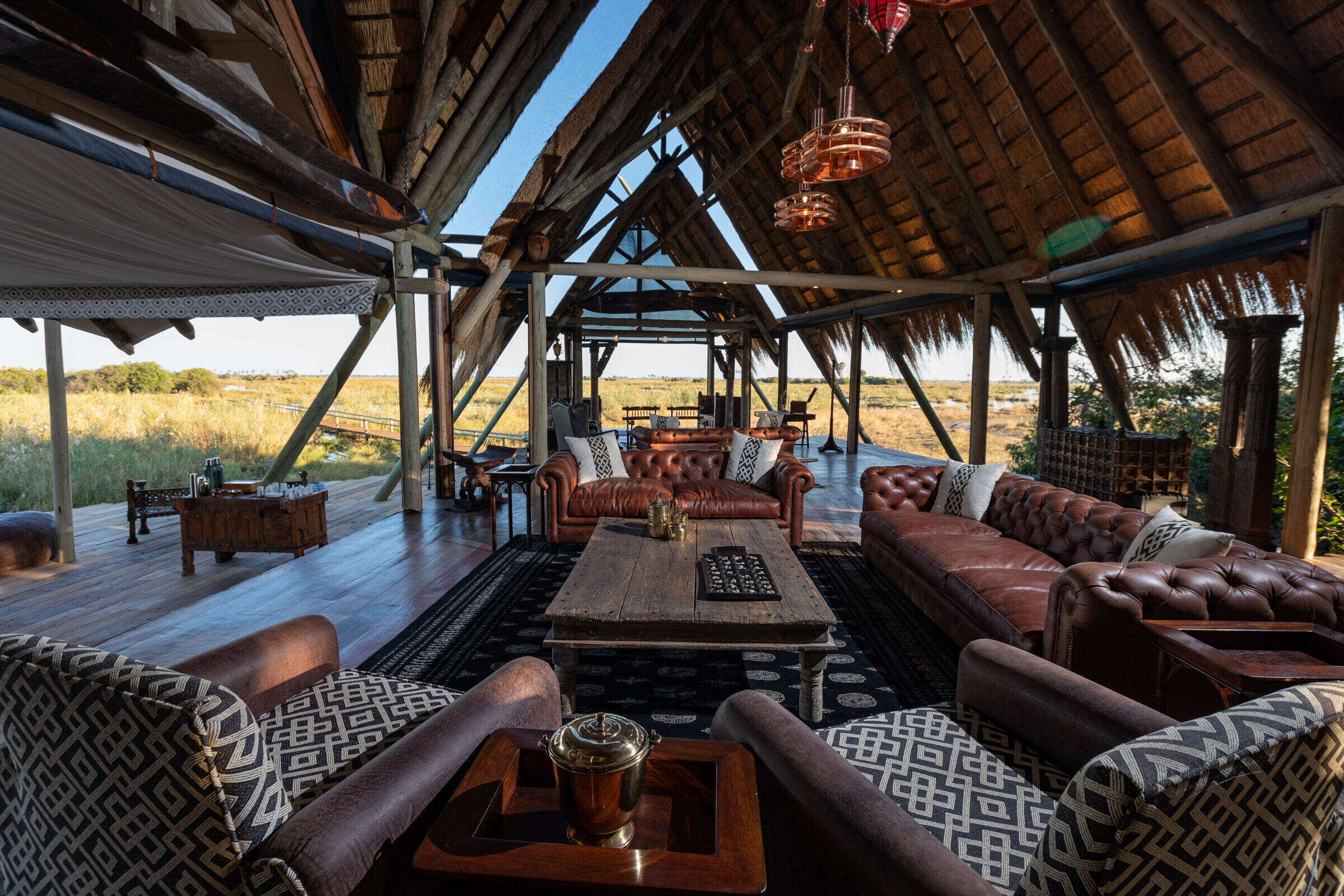 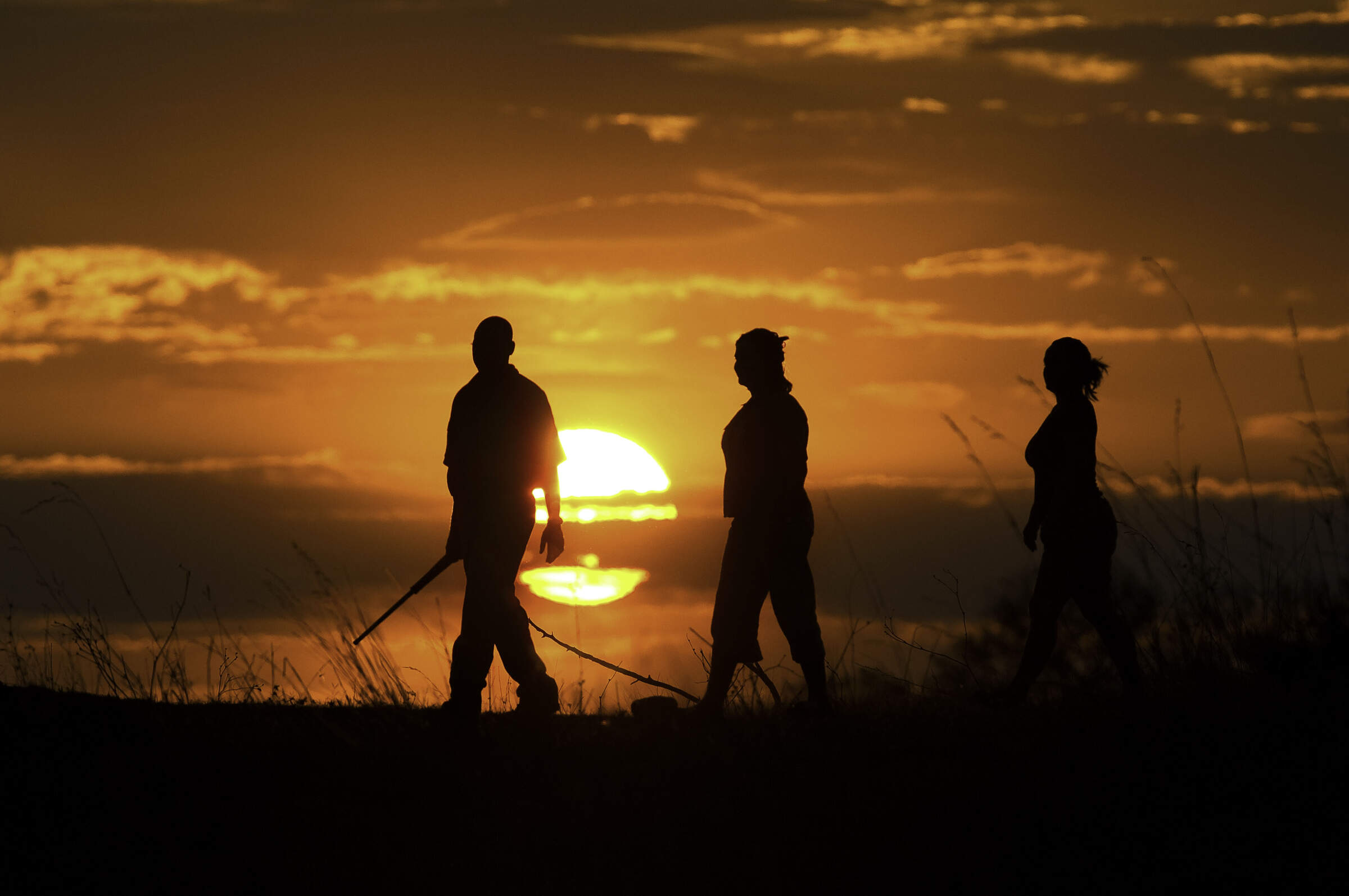 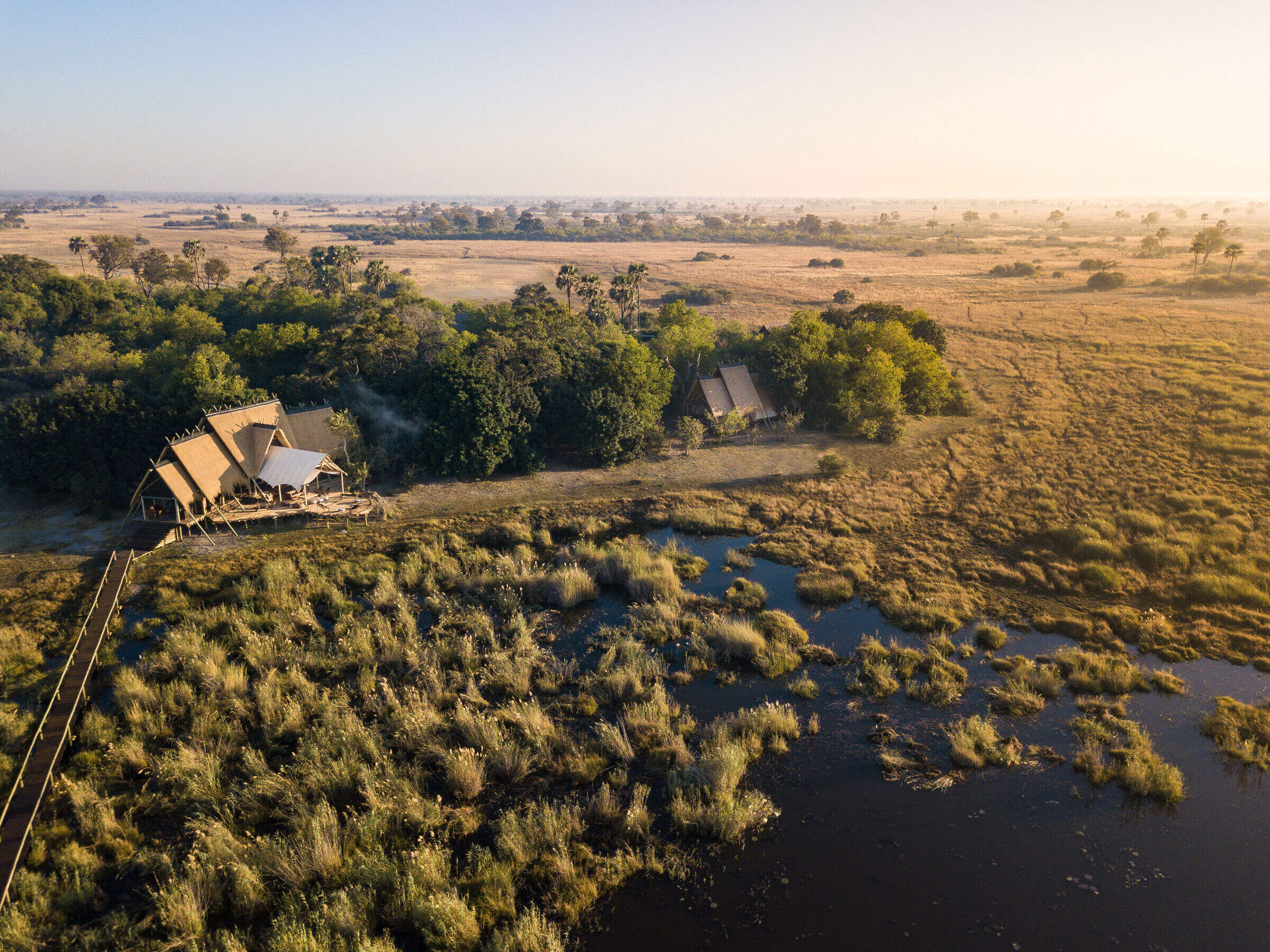 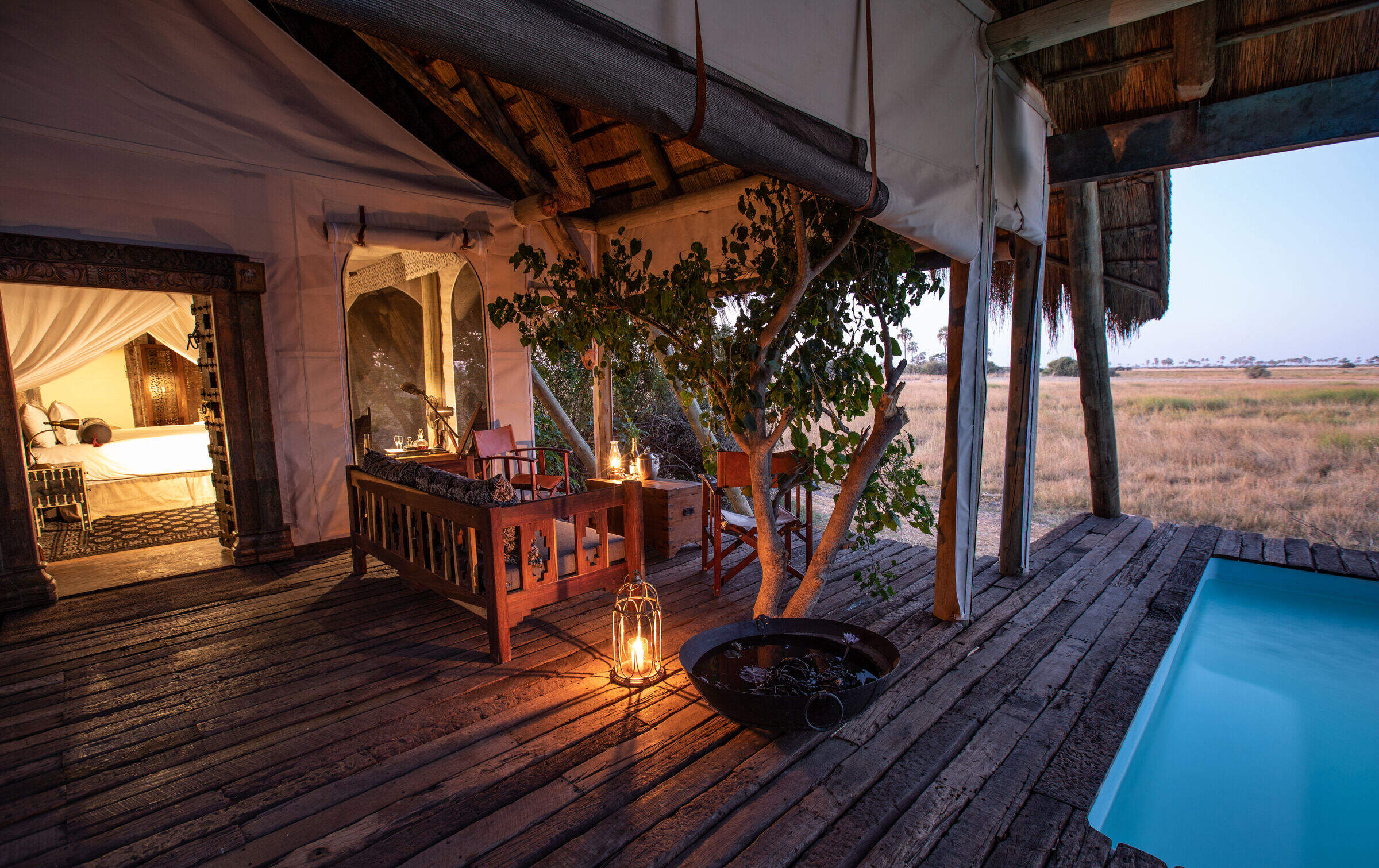 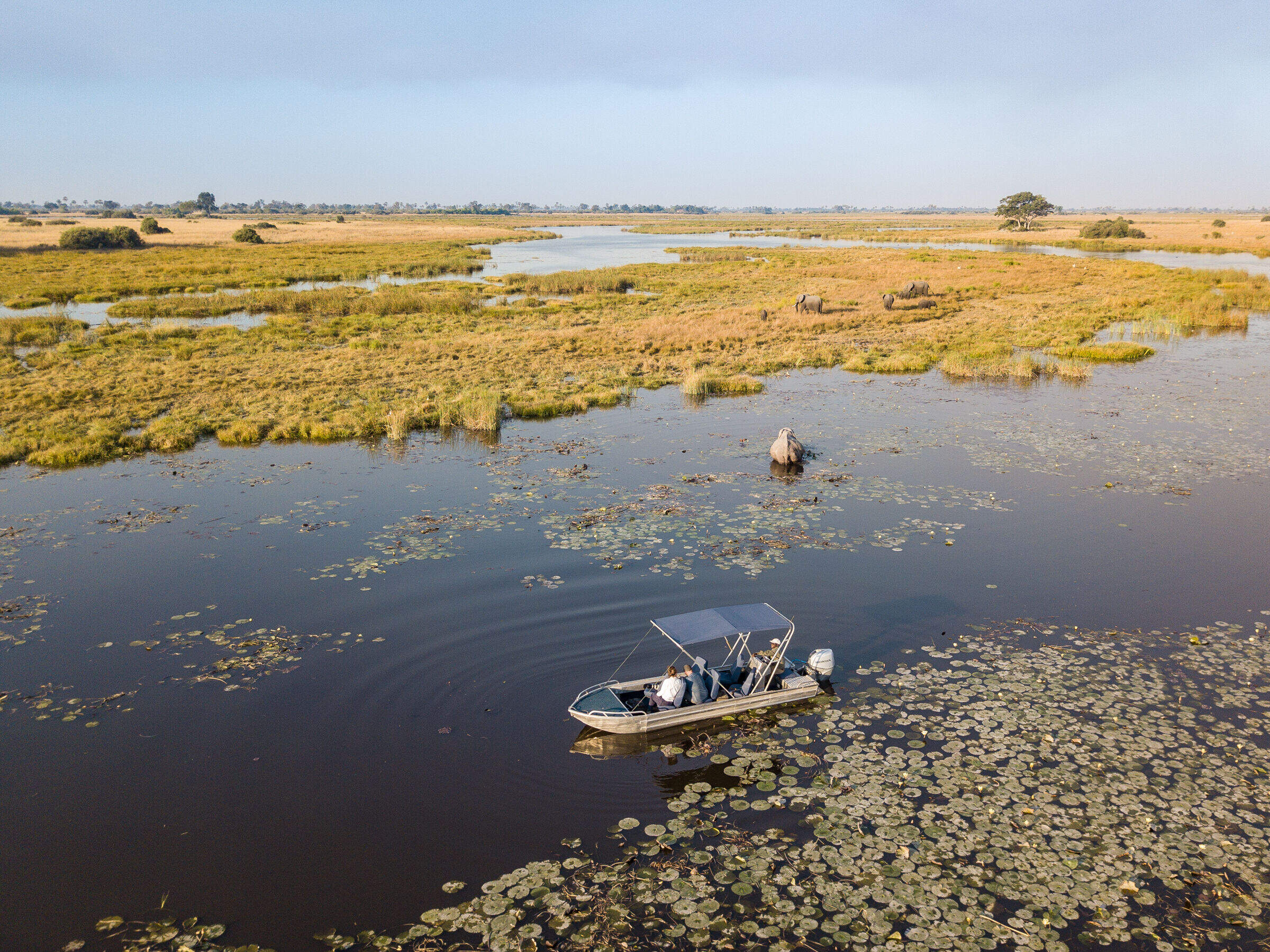 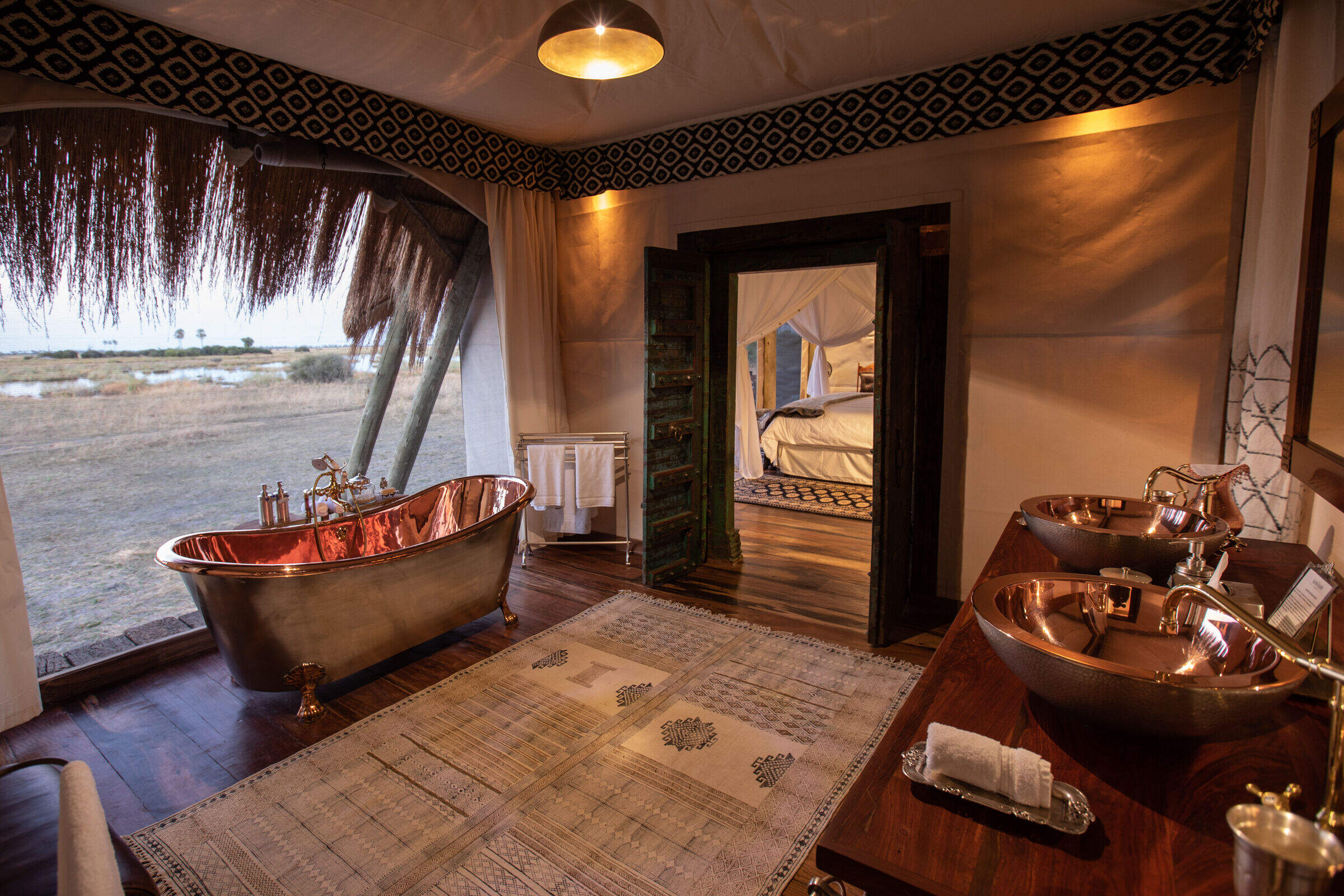 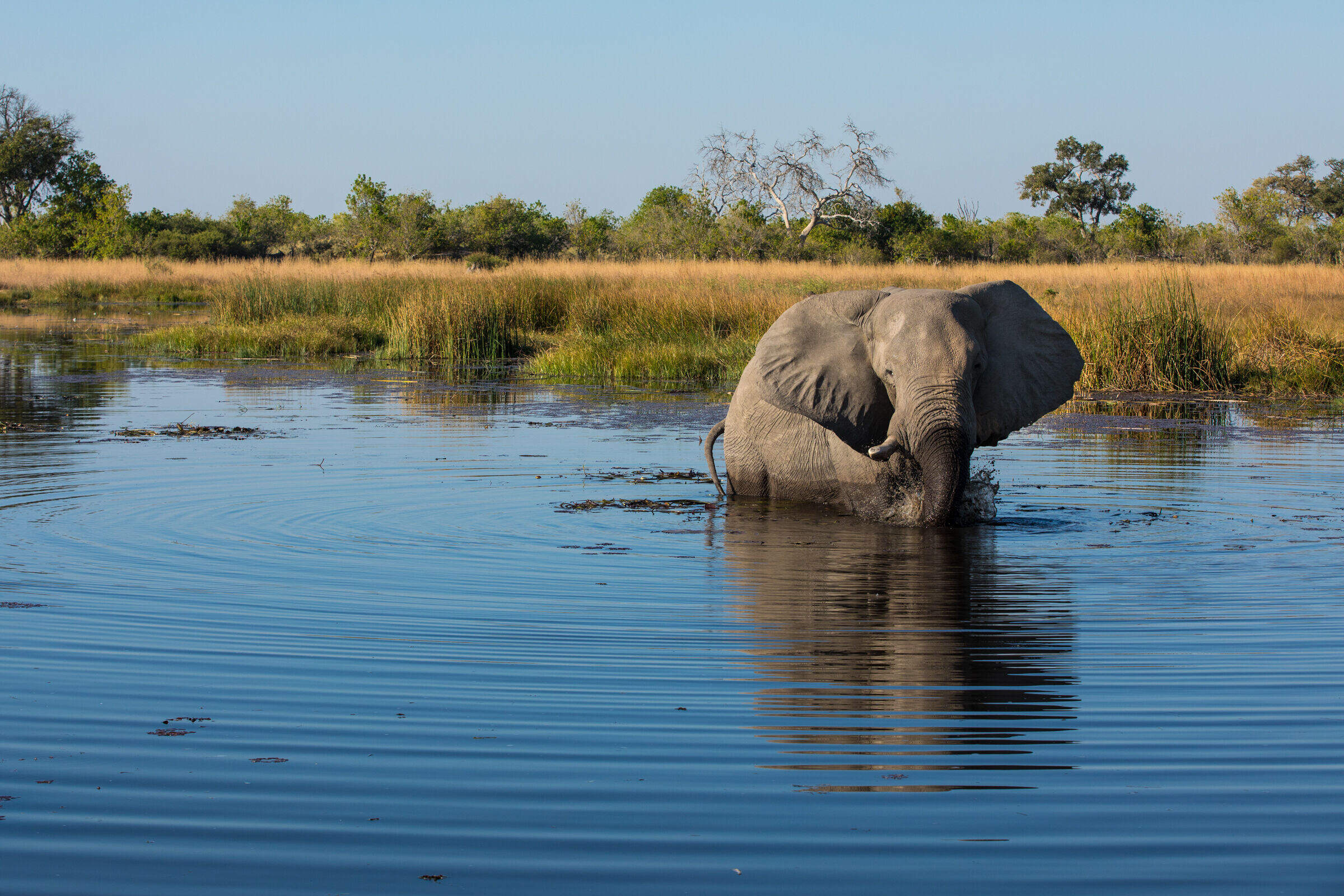 66 independent comments and wildlife information from our travellers who have visited Selinda Camp and kindly agreed to share their thoughts. They do not necessarily represent the views of Expert Africa

"A great camp where we had unusually good game"

3 nights Arrived 30 Aug 2012
"The camp facilities were luxurious, tasteful, well kept. The food was outstanding as it was at Tubu. The gift shop had beautiful local craft.

We had an outstanding guide (Kops) who made it possible for us to watch a remarkable scene of an approach of a cheetah to make a kill of a kurdu, followed by an approach of a leopard, a confrontation between the 2 cats, and the ultimate triumph of the leopard to take over the kill while the cheetah watched and finally backed off. The 2 of the other 3 afternoon game drives were also exciting and wonderful.

However, the 3 morning game drives a woman insisted on finding a pack of wild dogs to the exclusion of any other game viewing. We sped past zebras, giraffs and elephants bouncing uncomfortably through the bush in the vain search for her obsession. She intimidated the guide and we were too inexperienced and polite to object. To avoid further futile searches for wild dogs we opted for a short boat ride, which John, the Manager was kind enough to arrange, which turned out to have its own spectacular animal viewing. John is a particularly good manager who accommodated us and others in any way that he could.

We later discussed the problem of a domineering individual on a grame ride and suggested that he announce when guests arrive that the viewing and trip preferences have to be fairly shared by all. We suggest that this be established as a general camp policy for all camps." See all these reviews: 8n in Botswana; 3n in South Africa; 2n in Zambia
Experience Report
Overall Rating:
Excellent
Location:
Excellent
Service:
Excellent
Activities:
Excellent
Rooms:
Excellent
Food:
Excellent
Facilities:
Excellent
Mr & Mrs B
Billericay

3 nights Arrived 4 Jun 2012
"This was our third camp and like the two previous camps it was delightful.

3 nights Arrived 16 Oct 2011
"Our stay here was great. Our guide, KB, was very personable. We were only in the car with one other couple.

They tried hard to find the animals we were most interested in seeing. Unfortunately, the dogs were denning up near Lagoon and the large pride of lions was down in Savuti.

We did see glimpses of leopard and lion. We saw lots of other game as well. The camp is in a beautiful location. The managers David and Alice were exceptionally nice. David even loaned me his monopod for my camera." See all these reviews: 10n in Botswana; 2n in South Africa; 2n in Zimbabwe
Experience Report
Overall Rating:
Excellent
Location:
Excellent
Service:
Excellent
Activities:
Excellent
Rooms:
Excellent
Food:
Good
Facilities:
Excellent
Mr & Mrs W
Austin

3 nights Arrived 30 Jul 2011
"Selinda offered excellent food, staff and animal viewing. Taking the mokoros out on the Delta was wonderful.

1 night Arrived 15 Jun 2011
"Selinda is a beautiful camp. We were very lucky that when we stayed there we not only were only two of three guests in the entire camp that night, we also were treated to a lunar eclipse.

The rooms were extremely luxurious - the only camp that we stayed in with an individual power supply to each chalet, bath robes and slippers, full laundry service and a few other little extras which made it notable. The food also was exemplary - a choice of main course at dinner, access to a well stocked wine cellar, a wine tasting evening and a very comprehensive breakfast menu.

We had a great time fishing at Selinda with success from both the jetty right outside the lodge as well as from the boat a little way away (pike and bream). The camp managers were incredibly attentive, pleasant and very interesting people to talk to - it was nice for us to meet a couple who seem to be so genuinely enjoying their work." See all these reviews: 10n in Botswana; 3n in Zambia
Experience Report
Overall Rating:
Excellent
Location:
Excellent
Service:
Excellent
Activities:
Excellent
Rooms:
Excellent
Food:
Excellent
Facilities:
Excellent
Mr R
Paris

2 nights Arrived 3 Jun 2011
"The camp is in a gorgeous setting and our room was the nicest of the four camps that we stayed at.

Staff was great overall with one important exception - we were not thrilled with our guide. Although we saw a ton of wildlife, our guide often seemed elsewhere and was not very interested in interacting.

Great food and we enjoyed very much the manager and his wife who have all kinds of ideas to entertain the guests when not out on game drives. Other than the guide though, this camp is fantastic." See all these reviews: 10n in Botswana; 2n in Zambia
Experience Report
Overall Rating:
Excellent
Location:
Excellent
Service:
Excellent
Activities:
Excellent
Rooms:
Excellent
Food:
Excellent
Facilities:
Good
Mr & Mrs G
Hampshire

"The best leopard sighting ever!"

3 nights Arrived 28 May 2011
"David & Alice Murray are excellent hosts The food was excellent including delicious fillet of Kudu! The staff were very friendly and afficient.

3 nights Arrived 26 Jan 2011
"Selinda camp was a little difficult to get to; their airstrip was flooded so we landed at Lebala airstrip. But once we got there, it was a great camp. The tents were a little tired but very nicely decorated with great mosquito nets that had openings marked with sewn in shells (if you have ever tried to find your way out of a mosquito net in the dark you would appreciate this). The indoor/outdoor bathroom is unique and once you realize that the open shower throws water in a wide circle you allow for that. The common areas are well designed and have unique features in the dining tables, and in a sitting area used for tea. The staff seem genuinely interested in you as an individual and are the most efficient that we encountered in the 4 camps. The food was also the best of the 4 camps.

The camp managers, David and Alice, are capable, professional, and a lot of fun. We had the best "social evenings" at this camp mainly due to David and Alice's conversational skill at putting folks at ease. A few camp-wide problems arose during our stay but Alice or David always apprised the guests of the situation, so everyone knew what was going on, and there were few difficulties.

Our guide, Jonah, was the best that we had among all 4 camps. He was a great tracker in very difficult terrain, and he was an excellent driver in very difficult terrain. Jonah was very knowledgeable about the flora and fauna in this area. We once again had some downpours during our game drives, but Jonah managed to make this interesting and even enjoyable. He once provided coffee on the vehicle in the rain as we watched over 30 hippos cavorting in a lake.

Our only problem here was the drive to the airstrip at the end of our visit. Selinda and it's neighbor's air strips were flooded so we and another couple would need to be driven to another strip that was usually 40 minutes away but with the recent rains it would take maybe 2 hours. It was decided we would combine this 2-hour trip with a game drive. The plane was due at 12:30 and we were to leave at 8:30. The driver and vehicle got stuck in mud at camp so we had to get another vehicle, so our departure was a little after nine. The only extended stop for photo's was made by the driver who wanted to photograph a lechwe that hung out with bush buck.

About 2 hours into this drive the guide (who had not been our camp guide/driver) said we were behind schedule and he had to drive very fast to make it to the air strip. This was a drive from hell! Sitting right behind him we could see that he was going sometimes 40 miles an hour on this bush track. He would brake suddenly with no warning and throw us out of our seats. If a large animal had stepped into the track, we would have hit it due to our speed. This was the most dangerous aspect of our trip. If someone had driven like this on a game drive we would have refused to drive with them again.

We would return to this area again, there were many animals and the area is diverse and lovely." See all these reviews: 13n in Botswana
Experience Report
Overall Rating:
Excellent
Location:
Good
Service:
Excellent
Activities:
Excellent
Rooms:
Good
Food:
Excellent
Facilities:
Average
Mr C & Mrs A
UK

3 nights Arrived 9 Oct 2010
"Food and hospitality were outstanding but very lacking in game and from this aspect was very disappointing.

However we enjoyed our stay here." See all these reviews: 16n in Namibia; 6n in Botswana; 3n in Zambia; 3n in South Africa
Experience Report
Overall Rating:
Excellent
Location:
Average
Service:
Excellent
Activities:
Average
Rooms:
Excellent
Food:
Excellent
Facilities:
Good
Feedback Response
We were sorry that these travellers didn’t experience the usual densities of game that would be expected from a stay at Selinda; put this in context by reading about about their trip as a whole.

Other lodges in Kwando-Linyanti area

Within the vast Kwando Reserve, renowned for its wild dogs, Lagoon Camp offers excellent game viewing that focuses on predators.

With enthusiastic guides and trackers, Lebala – in a vast private reserve – is a particularly good camp for seeking wild dogs..

DumaTau, in the private Linyanti Reserve, offers game drives, seasonal boat cruises and walks. Wildlife safaris here are quite seasonal, and are at their best during the height of the dry season, between June and October.

For years the Savuti Channel ran dry, but it's now flowing again and this newly refurbished, 7-room lodge has pride of place to witness the spectacle.

Zarafa is an exclusive camp overlooking the scenic Zibadianja Lagoon within the Selinda Reserve, a particularly game-rich area between June and early November.

King’s Pool is a top-end luxury safari camp with a price tag to match; the game viewing can be very good during the dry season.

Independently owned and run, the small Linyanti Ebony sits on the same site as Linyanti Bush Camp, with similarly high standards of guiding, and a strong emphasis on the wildlife experience.

The Selinda Adventure Trail offers a novel and tranquil way to travel through part of Botswana's pristine wilderness whilst staying in comfortable fly-camps and led by a knowledgeable guide.

A simple and remote satellite camp, Little Motswiri focuses on non-motorised activities, particularly walking and horseriding. It enables guests to explore 120,000 acres of private wilderness around the Selinda Spillway.

Footsteps Across the Linyanti is the only true mobile walking safari we know of in Botswana. Explore a wild and remote wilderness on foot with a knowledgeable guide.