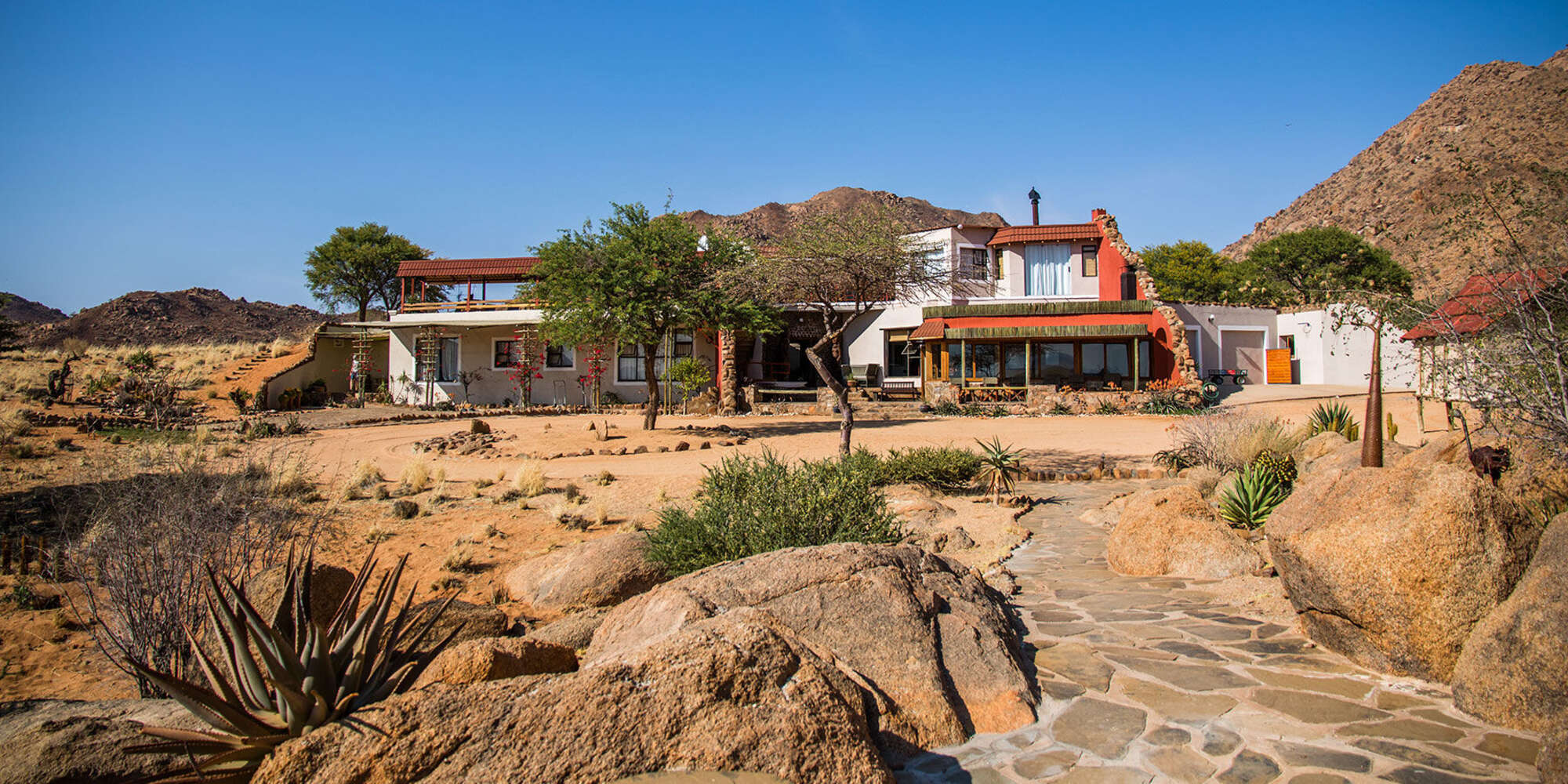 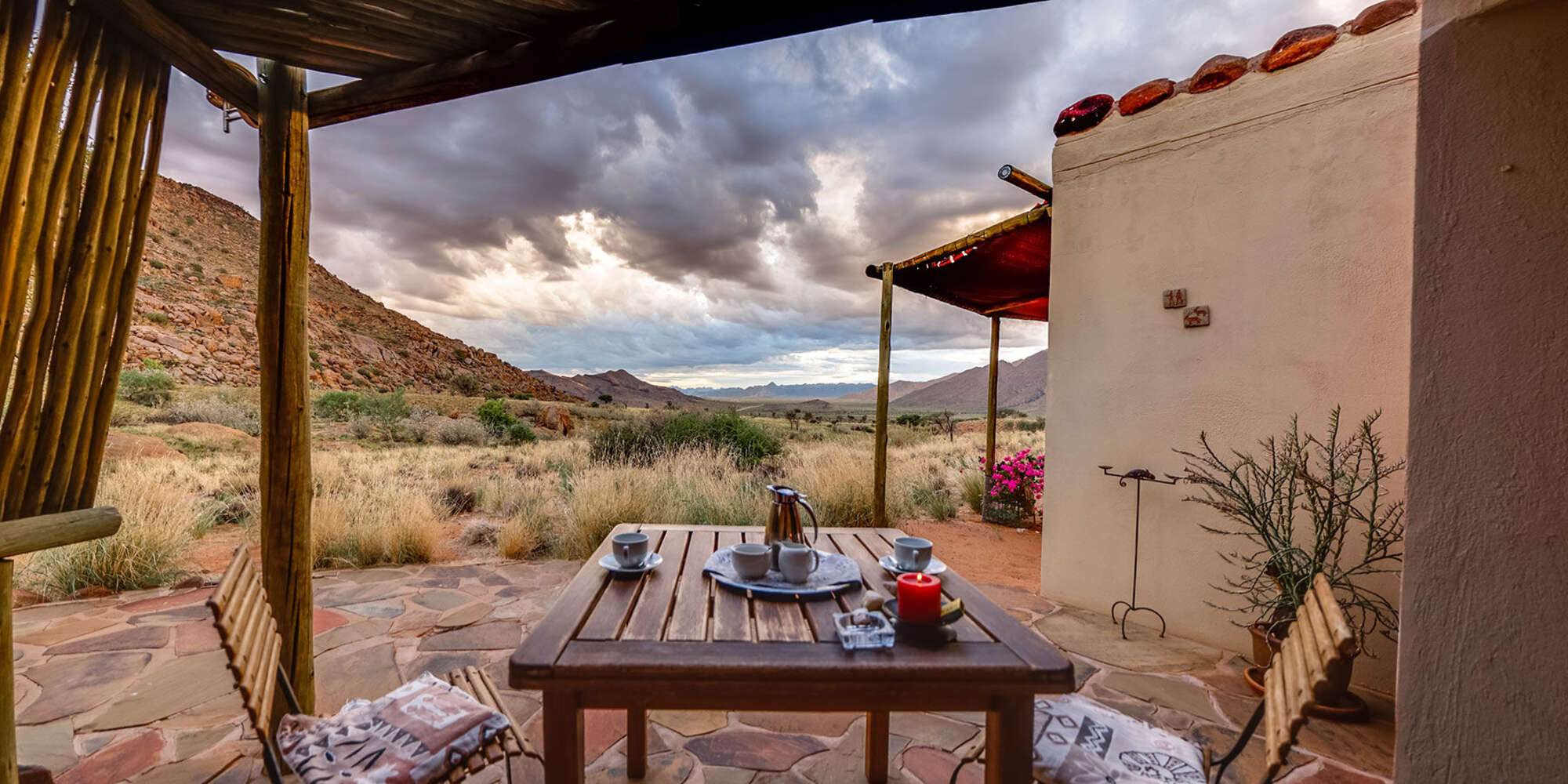 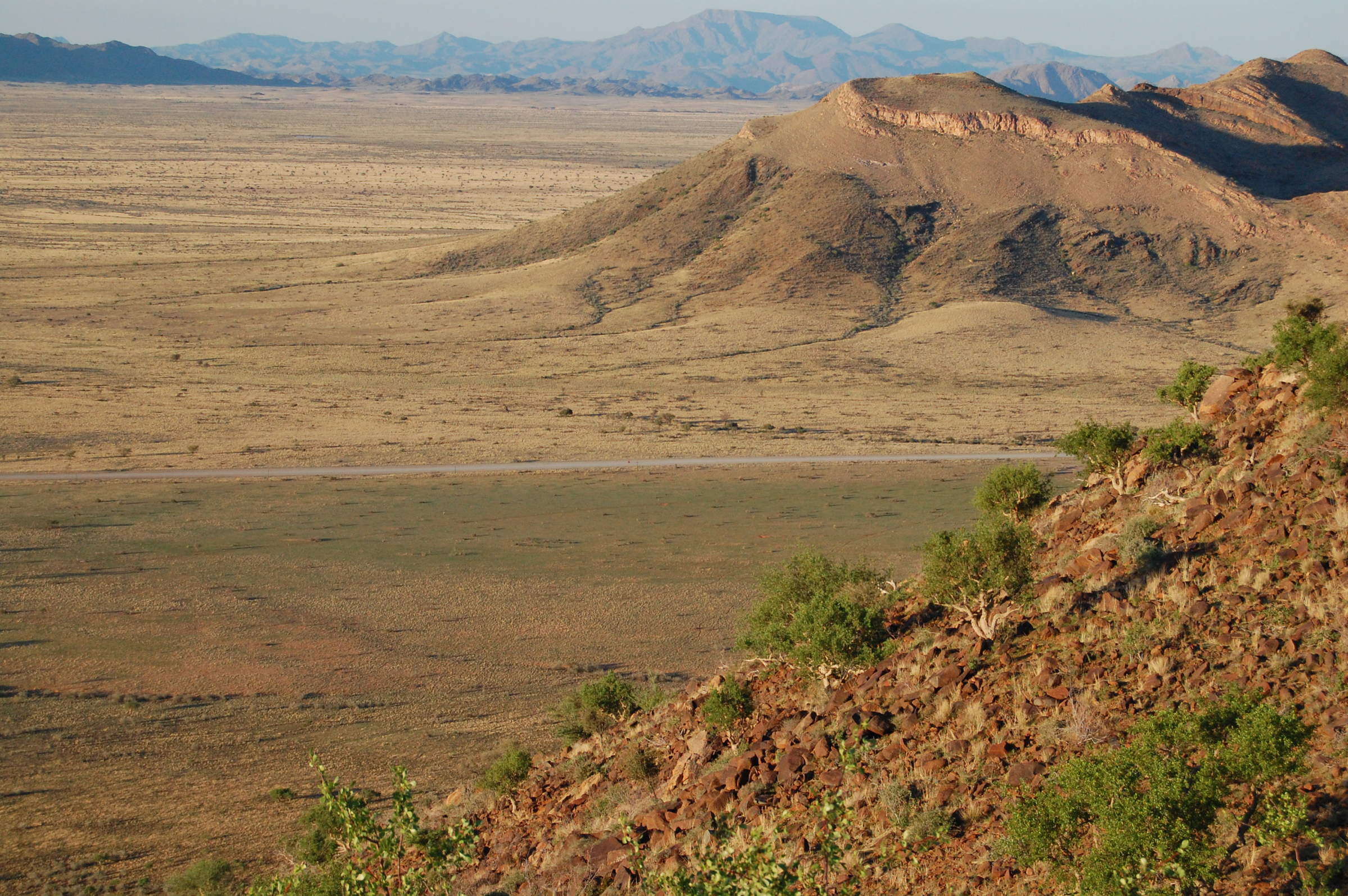 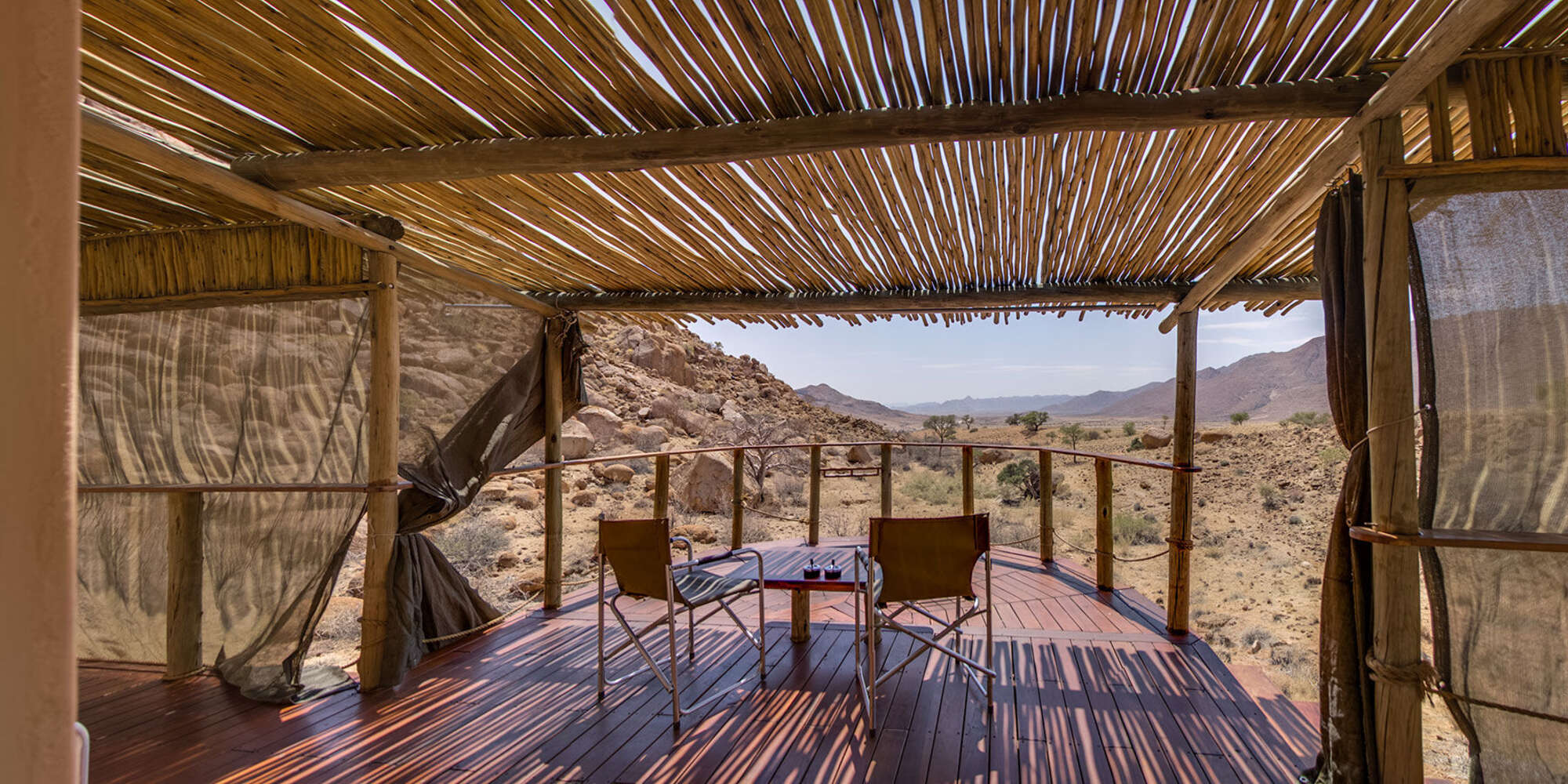 37 independent comments and wildlife information from our travellers who have visited Barkhan Dune Retreat and kindly agreed to share their thoughts. They do not necessarily represent the views of Expert Africa

1 night Arrived 28 Jan 2014
"Rooms well appointed but double bed small compared to others; ac not up to heat and difficult to keep cool overnight.

We took a sundowner game drive with William, enjoyed the sunset and the drinks along with spectacular views and conversations. The dinner was family style with other traveller and our hosts. Food was yummy, wine was excellent and the conversations were priceless.

2 nights Arrived 27 Jun 2013
"Stunning but isolated location with exceptional views down the valley and no other houses in sight. The owners were pretty welcoming. There were actually no other guests staying at Barchan Dunes for the two nights that we were at KuanguKuangu. We had dinner in the farmhouse on the first night - very tasty Springbok steaks and nice to talk to the hosts.

KuanguKuangu itself is about 800m up a track from the farmhouse. It is charming but the bathroom was infested with wasps during the day which was a bit of a shame. On the second evening, one of the neighbouring farmers was shining a strong searchlight up the valley straight at the room which was a bit disconcerting to say the least. Apparently he is hunting jackals, but we pointed out to the hosts perhaps they should have a word with him not to disturb their guests!

Water is heated by a wood-burner but this doesn't take long.
The hosts brought us a braai-pack the second evening which was absolutely delicious.
The bed was very comfortable. Great view of the stars and we saw lots of mountain zebra not far from the door." See all these reviews: 14n in Namibia
Experience Report
Overall Rating:
Average
Location:
Good
Service:
Average
Rooms:
Poor
Food:
Good
Facilities:
Average
Mr C & Ms B
Macclesfi

Welcoming and entertaining hosts supplied good food and copious quantities of wine, and dining with them in their home was a pleasure and most informative in respect of Namibian life and local knowledge etc.. We were too tired that day to partake of the offered sundowner drive but other guests enjoyed it.

1 night Arrived 26 Jul 2012
"ended up in the 'honeymoon chalet' which was approx 500 m from main house right in the heart of the mountains. Chalet beautifully built into rock with glass walls, which resulted in a view from the bed which you could not forget. Surrounded by mountains behind which the sun rose the following morning. outdoor shower and bathroom facilities was a unique luxurious experience.

1 night Arrived 24 Oct 2011
"We arrived late after a long, but scenic drive, along the C27 from Helmeringhausen. We were hugely relieved that we had filled up on petrol in Sesriem as Solitaire had run dry!

Hannetjie and Willem made us feel very welcome. Dinner was delicious featuring a main of springbok taken from the property itself. Our room was spacious and comfortable with a stunning outlook down the valley.

We enjoyed watching Coco (the dog) and the meerkats. We did not have time to do any activities." See all these reviews: 20n in Namibia
Experience Report
Overall Rating:
Good
Location:
Good
Service:
Excellent
Facilities:
Excellent
Rooms:
Good
Food:
Good
T Family
Auckland

2 nights Arrived 4 Jul 2011
"As the lodge was not sign marked well on the road from Swakopmund we nearly missed it !

Hidden in the natural landscapes - the rooms were large and clean albeit could do with a little bit of modernising.

Our hosts thought of everything - from the nibbles, cheese and wine as we watched the sunset, to the fresh coffee delivered to our room in the morning, the lovely afternoon tea comprising of freshly baked muffins, coffee and juice and then of course the beer / wine as we went on our sundowner drive.

Not a lot to do around the area but definately worth popping in to see the Meerkats and to enjoy the wonderful hospitality, food and wine" See all these reviews: 20n in Namibia; 5n in Mozambique; 4n in Zimbabwe; 2n in South Africa; 2n in Botswana
Experience Report
Overall Rating:
Good
Location:
Good
Service:
Excellent
Rooms:
Average
Food:
Excellent
Mr & Mrs V
Coulsdon

1 night Arrived 4 Jun 2011
"Unbelievable, we felt like one of the family. Hannetjie and Willem were so welcoming. Lovely lovely room, lovely food and oodles of wine, we wished we were staying longer. We are glad that Sabina recommended breaking our journey here." See all these reviews: 25n in Namibia
Experience Report
Overall Rating:
Excellent
Location:
Excellent
Service:
Excellent
Rooms:
Excellent
Food:
Excellent
6
Whangarei

1 night Arrived 11 Apr 2011
"Well off the beaten track, but well worth it. We were welcomed by Hannetjie with drinks and shown to our rooms which were built into the hillside (dune).

Spacious rooms, nicely appointed, very unusual setting, great views out over the farm towards the Spreetshoogte Pass. Barchan Dune retreat is totally solar powered. Willem was a very generous host, and dined with us, entertaining us with stories and responding to our many questions. We enjoyed a sumptuous meal of game, which he ducked out to the kitchen to cook himself. Breakfast the next morning was equally good.

Kulala Desert Lodge offers comfortable rooms with fantastic views of the Namib and a private gate to the Namib-Naukluft Park - a bonus on guided excursions.

Bullsport is a cattle and game farm with thoroughbred horses offering warm hospitality and a genuine rural experience.