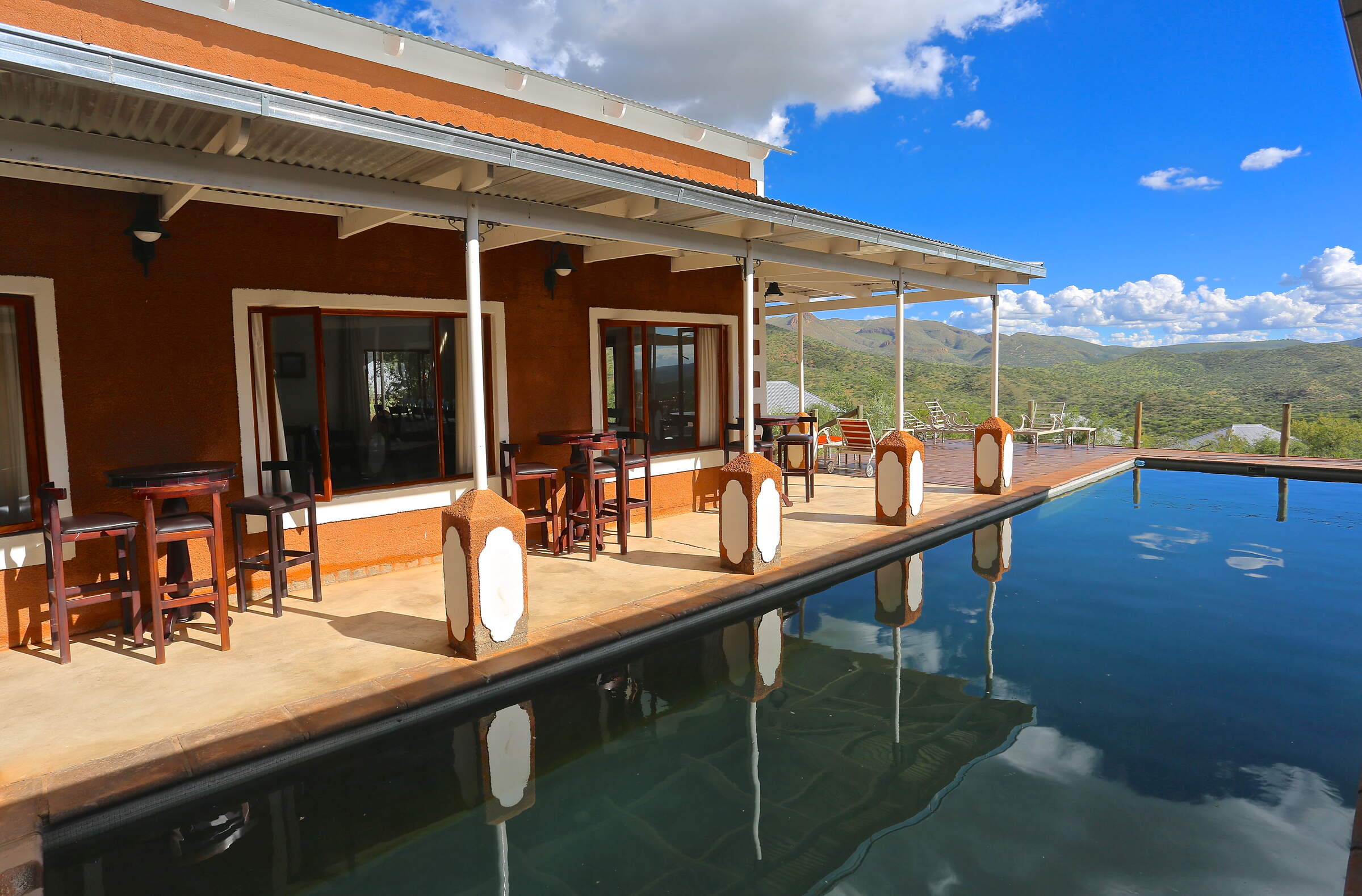 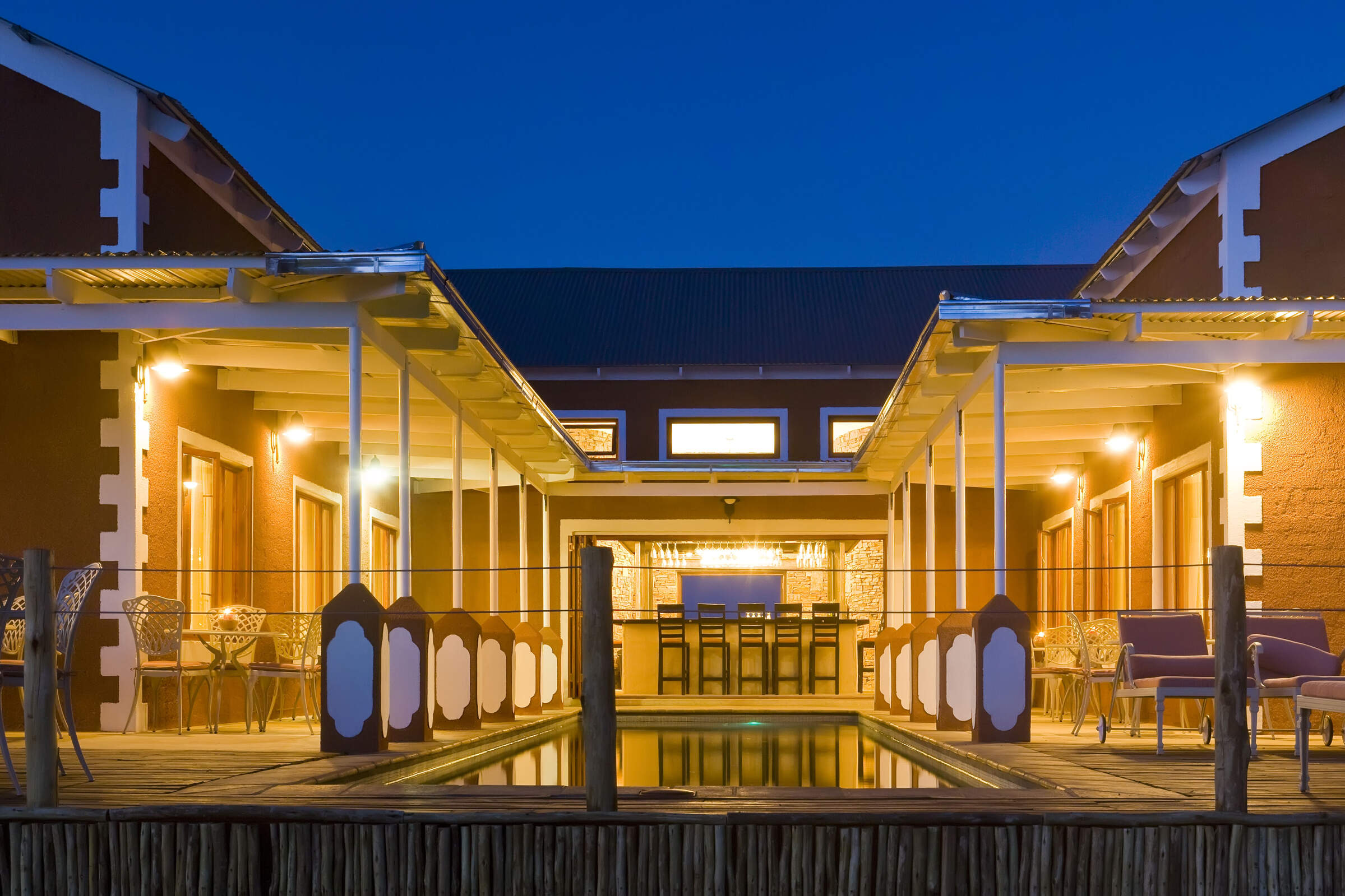 114 independent comments and wildlife information from our travellers who have visited River Crossing and kindly agreed to share their thoughts. They do not necessarily represent the views of Expert Africa

1 night Arrived 21 Feb 2019
"Reasonable place to stop over before flying out. Great views from a high point above Windhoek. Nice rooms. Public places a bit 'public'.

1 night Arrived 9 Feb 2019
"This was only an overnight stop after travelling from the UK.

Staff are the highlight and couldn't have been more helpful. Rooms are a bit tired but perfectly OK.

1 night Arrived 16 Jan 2019
"We were glad to have only a short drive to the Lodge after the overnight flight from UK.

The room had a slightly "tired" feel to it and the air conditioning unit somewhat inadequate for the very high temperature prevailing.
But the Lodge is ideal for an overnight stop to or from the airport." See all these reviews: 14n in Namibia
Experience Report
Overall Rating:
Good
Location:
Excellent
Service:
Average
Rooms:
Average
Food:
Good
Facilities:
Average
Mr & Mrs R
Syderstone

1 night Arrived 21 Sep 2018
"We have previously only stayed in Windhoek itself, but will probably stay here in future. It is easy to find from the airport road and s in a lovely location in the mountains. the views were as good as any elsewhere on our holiday in Namibia.

Our room was dated, but clean and tidy, with all facilities working. This was the only place that we stayed at with a television!

The staff were helpful in allowing us to book in online and print tickets for our flight home.

We chose to eat in the restaurant here, although it would have been easy enough to go into Windhoek. The food was fine." See all these reviews: 16n in Namibia; 4n in Botswana
Experience Report
Overall Rating:
Good
Location:
Excellent
Service:
Good
Rooms:
Average
Food:
Good
Mr A
Somerset

1 night Arrived 20 Aug 2018
"Was fine for one night on way back to airport. Rooms very tired, food not great. Some staff good, some clueless.

We booked horse riding but they didn't turn up and we wasted an hour finding them and got no apology for them not turning up." See all these reviews: 18n in Namibia
Experience Report
Overall Rating:
Average
Location:
Good
Service:
Average
Activities:
Terrible
Rooms:
Poor
Food:
Poor
Facilities:
Poor
Mr & Mrs S
St Albans

"Handy to Windhoek and airport"

There was no water on tap anywhere in the lodge for a day, which could have become a real problem with no toilet flushing etc and no communication with guests about the situation." See all these reviews: 17n in Namibia; 4n in Botswana; 3n in Zambia; 1n in South Africa
Experience Report
Overall Rating:
Good
Location:
Good
Service:
Good
Rooms:
Good
Food:
Excellent
Facilities:
Good
Mrs & Mr R
Australia

1 night Arrived 31 Jul 2018
"This was our second visit to River Crossing and while the first visit was good this visit was very disappointing. Below is a copy of the letter I wrote to River Crossing, dated 8th August. To this date, 21st August, there has been no response.

Recently we (4 of us in 2 rooms) stayed a night with you on the 1st August, yes, the night the water ran out.

While I understand that unforseen events such as this may occur, I am writing to say that not only were we inconvenienced but appalled at the lack of concern shown by the management for guests. At no time were we informed of the situation nor was anything done to ease the situation for guests.

We commented late in the afternoon of the 1st to staff about the lack of water and were informed that the water had run out and more water was coming soon. So we accepted this to be the case but next morning there was still no water. This of course meant there were no showers and perhaps more importantly no toilet flushing in either of the rooms we occupied, or the main area. There were also no signs in the main toilet at any time to apologise or to indicate that toilets should not be used. Not only was there no notification that there was a problem but there was no thought given to providing buckets of water in either the main toilets or rooms to flush the toilets.

Later, after breakfast, staff were seen taking buckets of water out of the pool presumably for cleaning, and taken to the kitchen (!) but still not being placed in the toilets.

When I approached a senior, but new staff person, and explained our concern, he was most apologetic but informed me management was unavailable. As we were leaving, he took my email address and assured me that I would receive an email from management but this has not been the case.

We paid our bar bill, our room had been prepaid, as we did not want the staff to be adversely affected.

I have not written previously as we have been travelling in areas without Internet, but rooms without showers and toilet flushing and with NO concern for guests is not acceptable.

Additional comments about River Crossing (not included in my letter):

On our two visits here, none of us (4) could get any information about the self-guided walks. It was suggested that we could walk down the dusty road that leads to/from the lodge!

It is also a shame that so many guests throw their rubbish e.g. cigarettes, tissues off the verandah (Unit 14) where it collects in the bushes and rather detracts from the setting.

Overall this seems to suggest that there is a management issue at this establishment." See all these reviews: 17n in Namibia; 4n in Botswana; 3n in Zambia; 1n in South Africa
Experience Report
Overall Rating:
Poor
Location:
Good
Service:
Terrible
Rooms:
Average
Food:
Excellent
Facilities:
Terrible
Feedback Response
After hearing that this traveller had contacted River Crossing but received no response, Expert Africa also contacted the lodge. We received the following explanation and apology to pass on to the traveller. And whilst the note and refund in appreciated, it is unfortunate that the response took so long and required our intervention.

Thank you kindly for your patience… I understand wholeheartedly the comments from your guests and would like to offer the following feedback.

Our water is pumped up to the lodge water tanks from a borehole. We are reliant on the farm team to provide this service for us, and have operational guidelines in terms of how to manage this should the supply be running low.

On the day in question, when our maintenance team noticed that the tanks had dropped to half, we called immediately to notify the farm team… a while later, when the water was still not being pumped up, we started to advise all guests that there was an issue with the water supply, but that it would hopefully be remedied soon. Again, a while later, we called the farm management team to get a status update, and were informed that the water would be pumping again shortly, after which we assumed that the water crisis had been resolved. Sadly, this was not the case, and the water only started to be pumped up again in the morning. A tap had been turned down at the farm tanks, and the water was not being directed up to the lodge.

This is not something that happens regularly, but it is something we have a system in place to deal with and did try to deal with accordingly on the day. Misinformation did not help us on the day, as when we were under the impression that all was under control again, it was in fact not.

Our plan going forward, which we have now already implemented, is to have a back-up tank in place which will provide us with 10,000 litres of water for just such a situation.

I can only apologise profusely for the poor experience that your guests had, and can assure you that the way that it was dealt with is not an indication of our management style. Our team is normally attentive and very sympathetic, as this is generally a stressful and unpleasant situation for all.

I would like to offer these guests a refund on their stay, as well as to assure them, that this is certainly not the norm, and that we have taken steps to avoid a similar situation in the future.