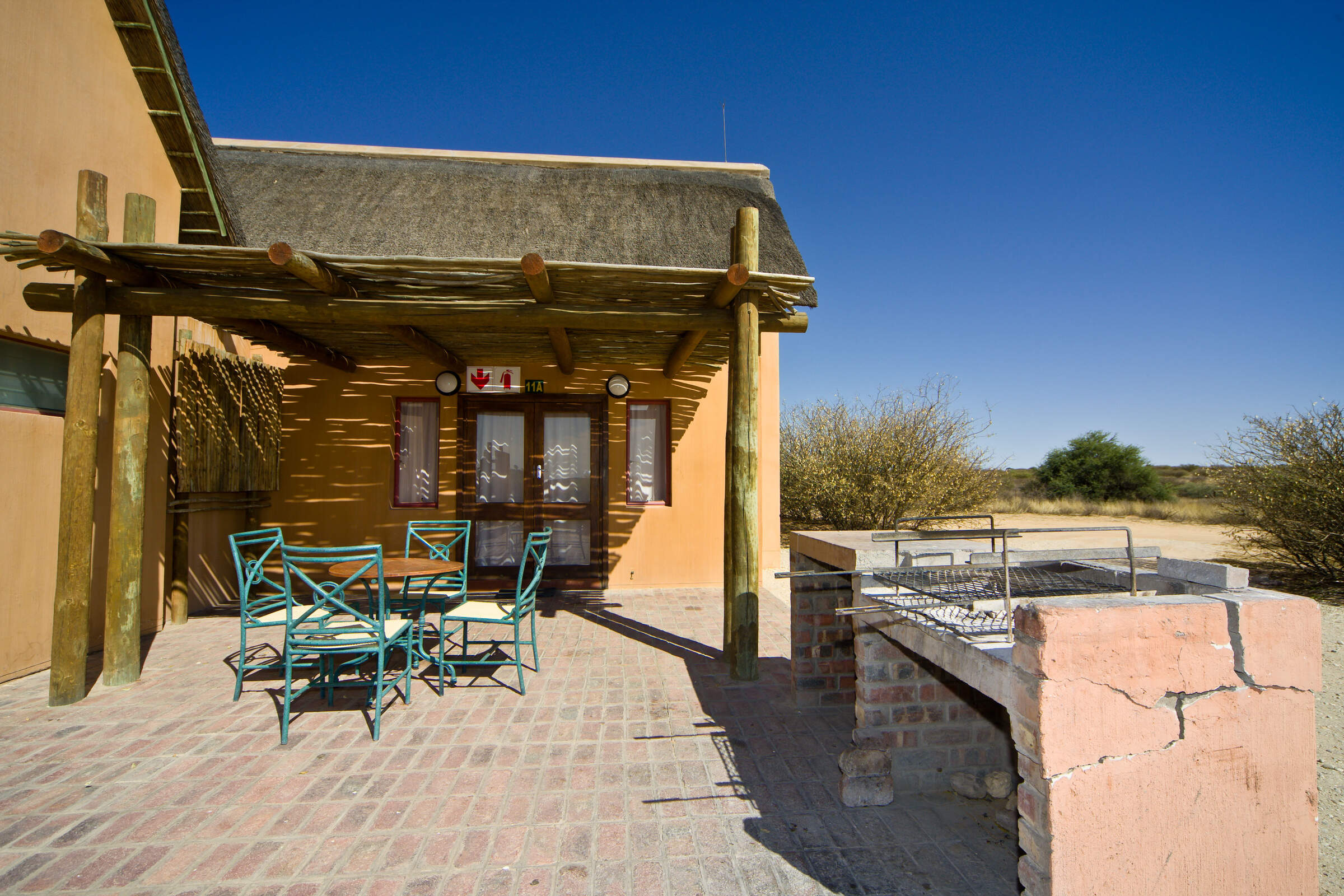 12 independent comments and wildlife information from our travellers who have visited Nossob Rest Camp and kindly agreed to share their thoughts. They do not necessarily represent the views of Expert Africa

1 night Arrived 8 Nov 2015
"Comfortable although not luxurious self catering. Good facilities in accommodation.

1 night Arrived 7 Feb 2015
"It is a good drive along the main gravel road from Twee Rivieren to Nossob . We were lucky enough to spot 5 cheetah enjoying a kill which we guess they had made earlier that morning.

Once again the staff in reception were pleasant and helpful and we were soon installed in our pleasant overnight accommodation . A three bedded room with ceiling fan, separate living area with a kitchen very similar to that at Twee Rivieren and separate shower and toilet.

There were table and chairs on a small tiled area outside. Whilst sitting having ' sundowners' we were entertained by yellow mongoose..

After enjoying our meal prepared in the very well equipped kitchen we walked to the hide. We had eaten quite early so that we could be in the hide as the sunset.

The hide is a reasonable size ( with seats for 20 +/- ) and looks out over the waterhole. We were a bit unlucky with the game just springbok and a brown hyena but we know other people had seen more wildlife there. That is how it happens!

Another good sleep ( unfortunately not disturbed by noises from the wildlife!!) .

We wanted to make an early start as we had been told that the road into Ghararhab could be difficult so wanted to tackle it before the sand got too hot. The fuel station at Nossob didn't open until 07.00 - we had assumed that it would open at 06.00 like Twee Rivieren. Our advice to other travellers would be to refuel on arrival - something we will do on future trips.

Popped into the shop to see if there was any fresh fruit or veg - no luck - the shop was due to be restocked later that day.

The Nossob shop appears to have limited opening times (possibly only 6 to 7 pm during our visit). If some travellers are relying on the shop for key supplies such as water, some care would be needed over this.

Nossob has a hide overlooking a waterhole adjacent to the camp. This was a very pleasing feature (and we would have liked to spend longer in it).

We thought Nossob was a pleasing camp and enjoyed visiting it. Temperatures in mid-summer can get very high.

2 nights Arrived 6 Sep 2014
"We had to move from a luxury unit to a single bedroom chalet on our second night. The first was on the hill at the back of the camp and was all one could hope for. The second was one of the older units, perfectly adequate in its way but rather ordinary.

The big plus at Nossob is that you can order freshly baked bread from the shop. Delicious. Recommended. Food "good" though, only because of the bread. Otherwise the usual game reserve fare from the camp shop." See all these reviews: 13n in South Africa
Experience Report
Overall Rating:
Average
Location:
Good
Service:
Average
Rooms:
Average
Food:
Good
Facilities:
Average
Mr M & Ms O
UK

1 night Arrived 1 Mar 2014
"Watch out for the electric fence at the entrance!

All san parks accommodation need a revamp - this place was looking tired - but still comfortable.

"Good and expected standard for a big rest cam"

2 nights Arrived 12 Dec 2013
"Big camp and the experience reflected this.

slight disappointment that our room had been given to other residents because we were later in arriving than them we therefore did not have a good view or as good as we might" See all these reviews: 18n in South Africa
Experience Report
Overall Rating:
Good
Location:
Good
Service:
Average
Rooms:
Good
Facilities:
Good
Mr & Mrs VDK
France

1 night Arrived 18 Nov 2010
"We spent one night at Nossob - and again the accommodation is fair, but basic. The location of this camp makes it an ideal stop as you travel around the park - and the Carnivores exhibition is really interesting.

The camp offered night drives - so we decided to join the trip that night. Unfortunately, the guide we had was fairly inexperienced, and did not have a pair of binoculars with him (which meant that a lot of the animal and bird identification was done by the passengers!). Then - when it got dark - instead of using the spotlight himself to sweep for animals - he handed 2 spotlights to passengers in the jeep and he sat in the front with the driver! Consequently, we were disappointed with this activity (and hence the low score below).

We chose to self cater at this camp - and the kitchen facilities were more than adequate for us to knock up a good dinner! Again, the shop is limited - but useful for picking up things like frozen meat, and treats such as sweets and wine! The waterhole is nicely situated - although there was limited activity when we were here." See all these reviews: 11n in South Africa
Experience Report
Overall Rating:
Average
Location:
Good
Service:
Good
Facilities:
Average
Rooms:
Average
Activities:
Poor
Feedback Response
These travellers wrote a comprehensive overview of their Kgalagadi trip –including comments on their game-viewing; read them here.

At the southern entrance to Kgalagadi Transfrontier Park, Twee Rivieren Rest Camp is the park's largest restcamp and also the centre for its administration. The accommodation here is all self-catering, and arranged in almost a little village – with a restaurant, a shop, a fuel station and a swimming pool. It's a park for serious safari aficionados to spent at least four or five nights exploring – with time here at the start and/or end.

The only private lodge within the Kgalagadi Transfrontier Park with full board and activities, !Xaus Lodge is a good base from which to explore the Kalahari.

Bitterpan Wilderness Camp, with the self-catering accommodation housed in reed and canvas chalets; it's an unusual but comfortable base from which to explore the Kgalagadi Transfrontier Park.

Molopo Kalahari Lodge is less than an hours' drive from the Kgalagadi Transfrontier Park. It is probably the best base for self-driving around the Kgalagadi if the restcamps inside the park are full, or if you're arriving here late in the afternoon.