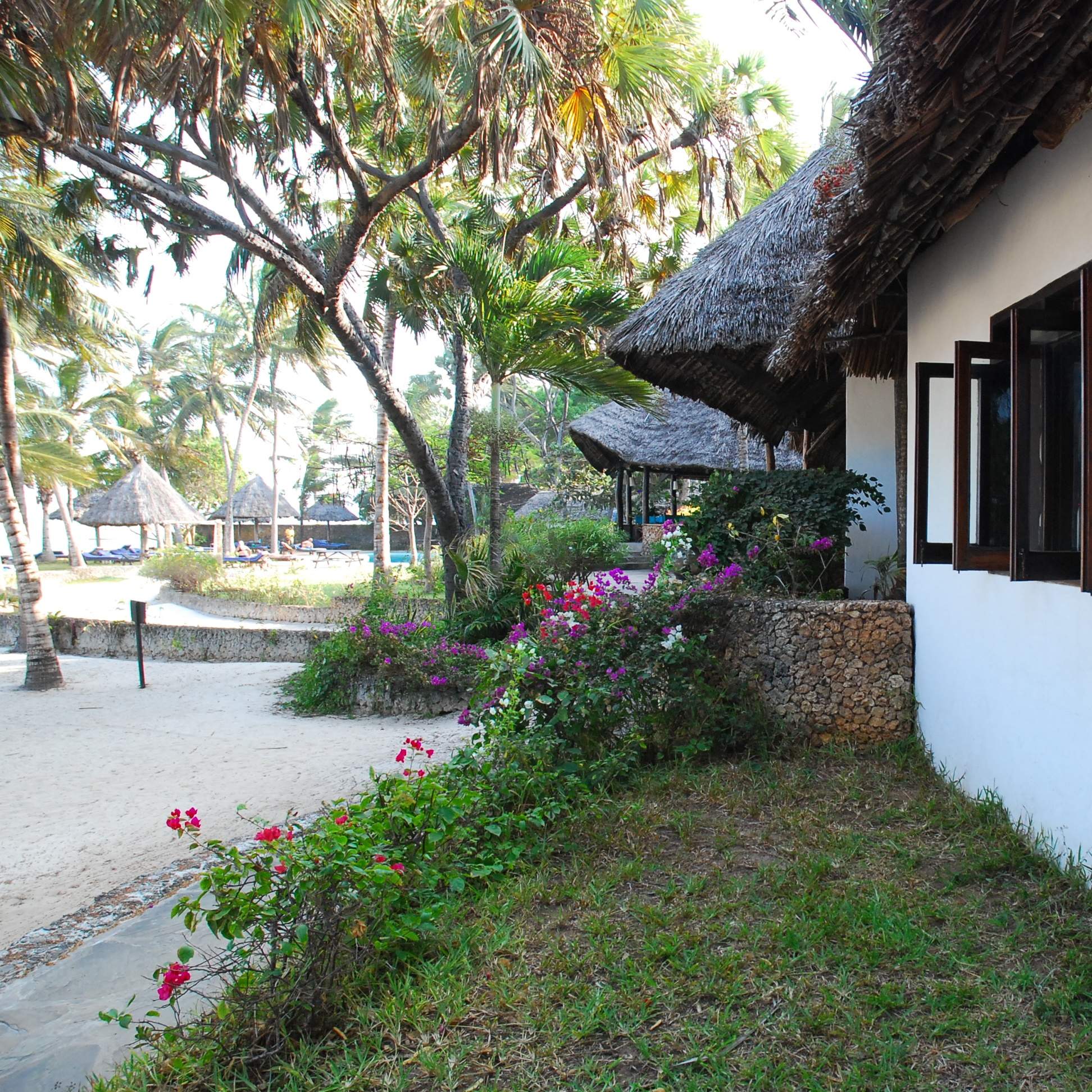 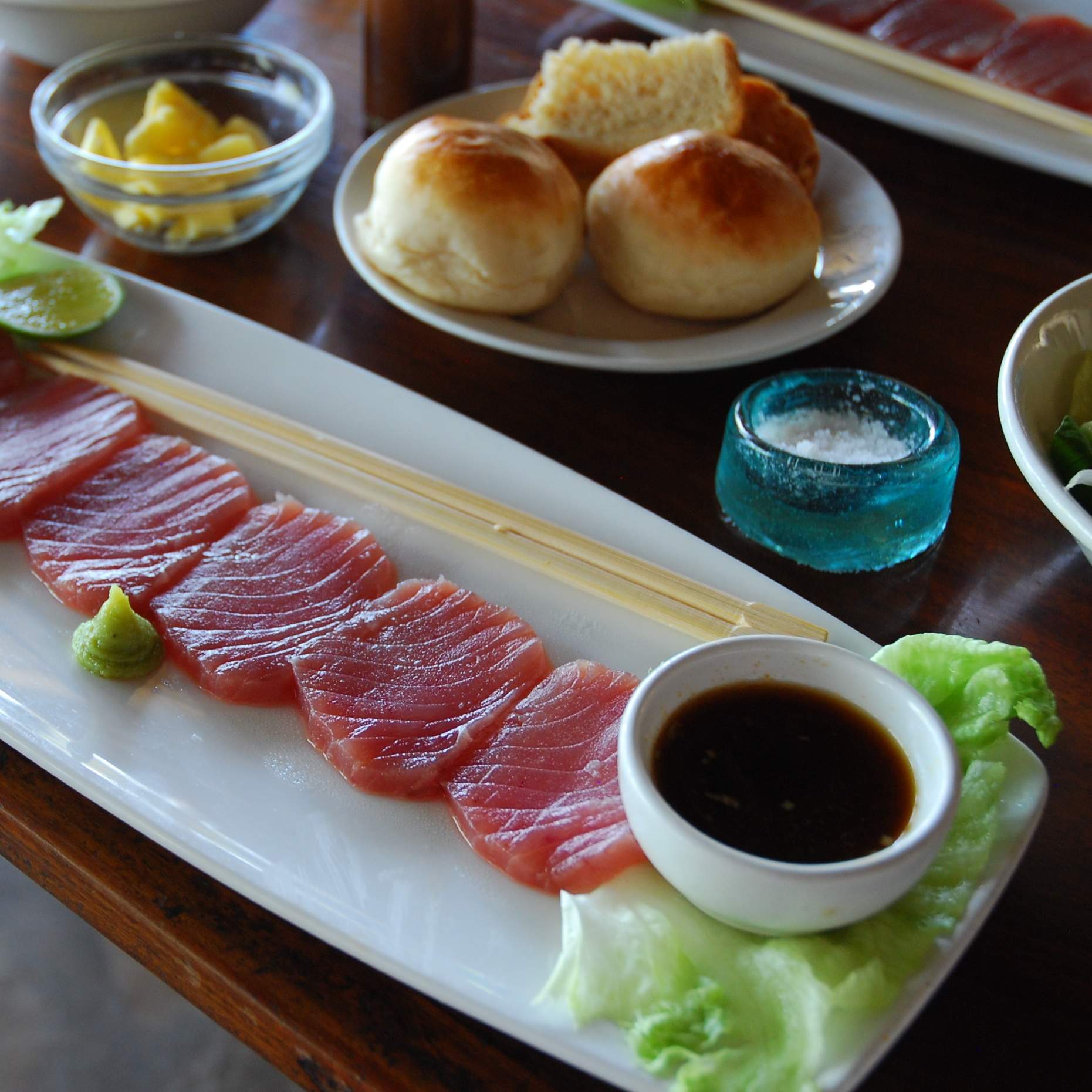 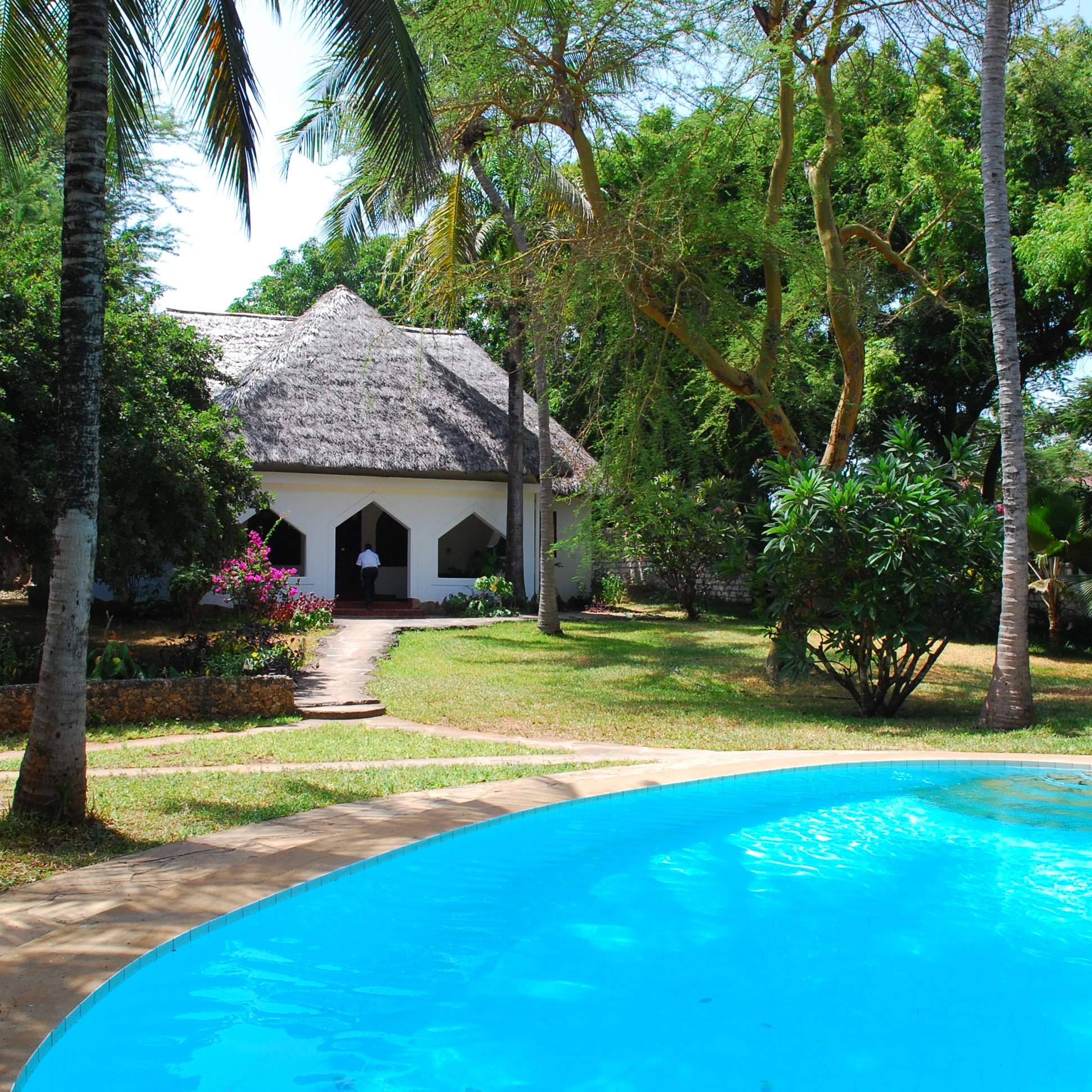 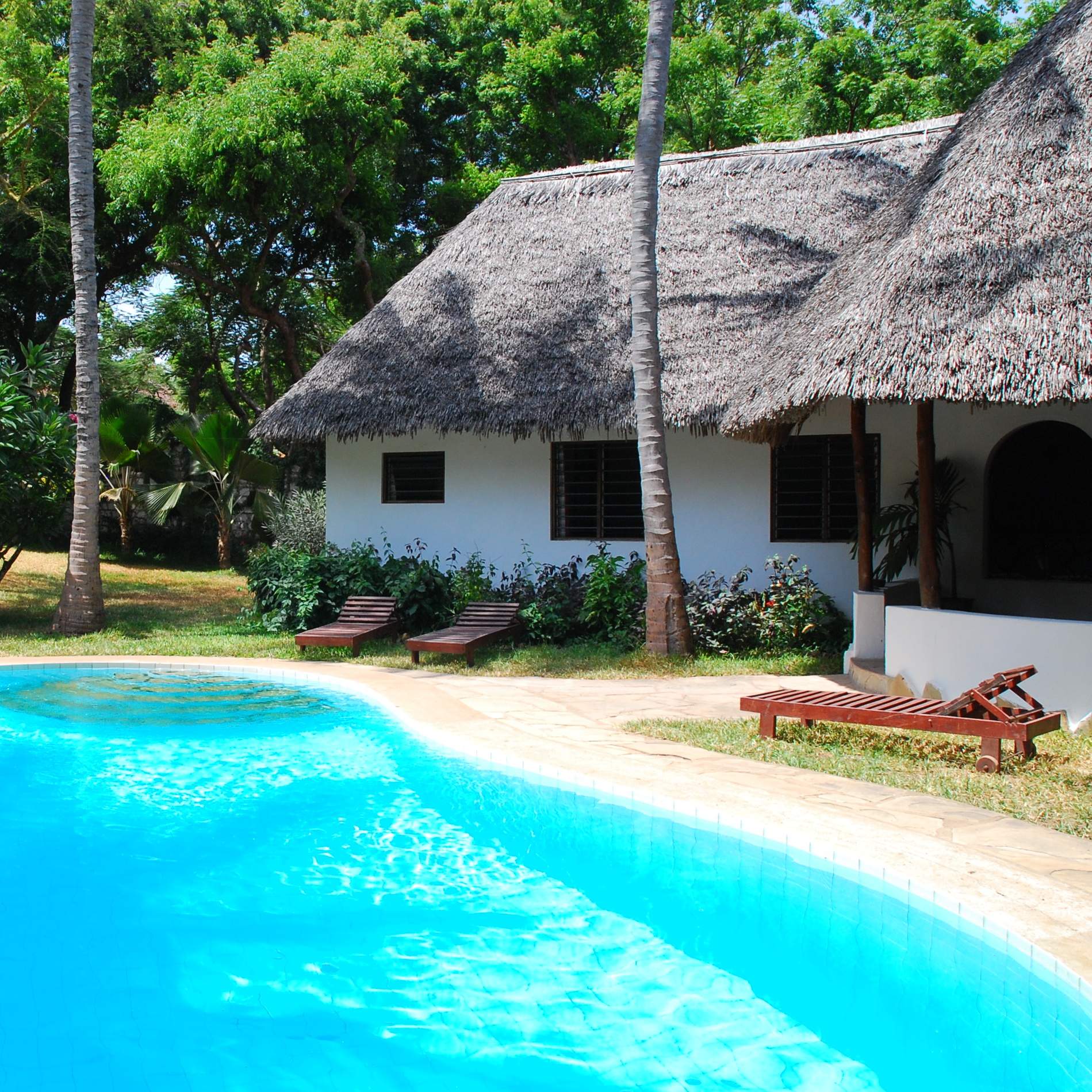 3 independent comments and wildlife information from our travellers who have visited Driftwood Beach Club and kindly agreed to share their thoughts. They do not necessarily represent the views of Expert Africa

4 nights Arrived 23 Feb 2014
"I had stayed at Driftwood with my wife in 1992. To my relief it has remained totally unchanged with the exception of IT and Air Con in the lodges!

For me a perfect set up. Individual cabins under thatched roofs, not too many, surrounded by palms and sand and a short walk to the recption areas, a relaxing bar area and restaurant. It is still very much in the tradition of what it was originally set up as in Fifties, as a Beach Club for locals and expats to unwind and relax and talk but rarely for large scale tour operations; there is even a very serviceable squash court for the athletic!

I loved it. The cabins were excellently appointed within large comfortable beds and efficient loo and shower areas. Each has small veranda with chairs and tables for an dawn ( and what dawns!) coffee or a G and T before supper after sunset. The food was first class and the service throughout efficient and friendly.

The lovely sandy beaches stretch for miles either way and when walkimng you were really not pestered just smile and walk on, indeed none came near the Club since we had security keeping careful watch.

I walked alone through the Malindi Markets after a tuk-tuk of ten minutes. full of life and colour and, though only the white face there, many smiles in response to 'Jambo'. To be enjoyed alone though perhaps best with a local guide to ,pave the way..

One highlight was a dhow trip with two amiable rogues Feisal and J ( name unpronounceable). Left at five pm returned two hours after sunset in pitch black under the stars; a four hour trip not as planned ''two hours. OK?''. Simply perfect including wading back to the shore afterwards in sea the feel of warm milk!

As a place to stay and relax, you could not fault Driftwood. With the walks and the lively town of Malindi to visit it was for me, perfect after the game lodges in the Noboisho Conservancy and the prospect of a return to England in March!." See all these reviews: 10n in Kenya
Experience Report
Overall Rating:
Excellent
Location:
Excellent
Service:
Excellent
Activities:
Excellent
Rooms:
Excellent
Food:
Excellent
Facilities:
Excellent
Dr B & Mr S
London

4 nights Arrived 3 Nov 2013
"We were aware that this is not the same kind of accommodation as the previous two lodges, but the rooms were good. We had asked for a 'sea view', but the view from our first room (29) was partially covered with other huts in front of us. We managed to change hut for the second night (25) and we were then in the front row, hearing the waves crash on the sand and able to walk straight out into the sand to watch the sun rise from the Indian Ocean in the morning. It was nice that the staff were able to accommodate our wishes. The staff were generally helpful (with different levels of friendliness) and attentive in their service. The pool was clean and the club seemed appropriately managed. We were happy that the manager, Roger, made an effort to introduce himself and make us feel welcome. The Driftwood helpfully supplied a babysitter (who charged a reasonable rate) during the evening. The food and selection at breakfast was good.

Our expectations of a 'beach holiday' were quickly revised when we got to experience the persistent beach boys we had been warned about. As soon as you lay close to the beach within the Driftwood compound or just step outside of it onto the sand of the beach, the beach boys want to sell you something, or take you to the reef. They are the reason I wouldn't recommend this holiday destination or Driftwood to friends. The staff from the hotel didn't really react to this situation or help us to deal with the beach boys.

We ended up walking up to the reef with one of them at low tide. several other guys were around us, picking up amazing looking starfish to show us. By the time we got to the actual corals we started to feel uncomfortable with the lack of respect for the habitat - and we felt our daughter's patience was coming to an end, so we turned back. The experience left a bitter taste in our mouths: we felt like we took part in the destruction of a marine reserve and encouraged the beach boys to continue hassling tourists. We also felt threatened by the group of boys when the amount of Ksh we gave to them was not considered enough for their troubles (an amount which we had previously sought advice on from the reception staff).

Going into town was a much more satisfying experience. The Driftwood offers a tuktuk ride around the town. The driver, Said, took us through the narrow streets of the Old Town and to some very specific shops - we assumed that he must be paid a commission if we had bought something there. There was none of the hassling that we experienced on the beach and we felt quite safe walking back home from where Said dropped us off.

We asked the reception about prices and arrangements for a trip to Gedi. We were not convinced that the staff member we talked to provided impartial advice- He quoted Ksh 5000 and suggested that we may have to pay more if we would want the driver to wait for us. When we asked Roger, however, he suggested a lower price (Ksh4000). As the receptions were the gate-keepers, we felt at their mercy to quote any figure. Further, when we asked reception about the Marine safari and the glass bottomed boats, they offered a package from Said. Again the receptionist seemed to suggest that we'd have to pay a high figure to compensate for the fact that there were only 2 adults (when the boat could take more) so we were not sure what we should or shouldn't pay. Basically, we expected to be able to trust the advice of the staff at Driftwood but these situations made us doubt the impartiality of some of the staff members (not all). Again, the actual boat trip involved the guide picking up star fish to show us and throwing bread into the water to attract the pretty fish. All things that seem to be inapproriate behaviour in a marine nature reserve.

Freddie found hassle from "beach boys" very intimidating and this meant that he would not go on the beach. Many guests/day visitors used the bar area during the day, some couples looked slightly dubious. Freddie asked me if the two black ladies accompanying two white African men were prostitutes - and I think they were. However, this aspect did not tarnish time at the Driftwood Beach Club.

I went out to the forest - guided bird tour - very good and also snorkelling on one of the dive boats - well looked after and enjoyable. Water a little cloudy for good views of fish." See all these reviews: 10n in Kenya
Experience Report
Overall Rating:
Good
Location:
Good
Service:
Good
Activities:
Good
Rooms:
Average
Food:
Good
Facilities:
Average
Showing 1-3 of 3
87%
3 reviews of Driftwood Beach Club by travellers since August 2007
Overall rating by our travellers
1
2
0
0
0
Filter by month

Other lodges in Kenya Coast

Pinewood Beach Resort is a relaxed resort-style hotel at the far south end of Diani Beach - an area known as Galu Beach.

Kinondo Kwetu is a small, owner-run, all-inclusive boutique lodge of exceptional quality situated on a remote stretch of beach south of the busier Diani Beach area.

Diani Blue is a low-key but stylishly comfortable small guesthouse, with high levels of service, in a busy, central part of Diani Beach.

The Sands At Nomad

The Sands At Nomad is a good-value, laidback, family friendly resort with lots of Swahili character.

Alfajiri Villas is an exclusive, owner-run, hideaway property consisting of three unique villas in a central part of the north end of Diani Beach.

Peponi is a long-established beach hotel, renowned for its good food, located in the village of Shela on the south side of Lamu island.

The Mnarari Club is located towards the seaward end of the beautiful Killifi Creek, and is an enduring favourite on the Kenya coast.

Ocean Sports is long-established and popular beach hotel right on one of Watamu's famous and beautiful bays.

Afro-Chic is a modern, Mediterranean-style ten-room boutique hotel on Diani Beach, with good food and a pleasant pool.

Shimba Lodge is a picturesque tree-hotel overlooking a forest waterhole in Shimba Hills National Park, with an aerial walkway and abundant wildlife.

Kutazama is an owner-managed, boutique luxury lodge in the Shimba Hills in a stunning location overlooking the Mwaluganje Elephant Sanctuary.

Long-established resort hotel with a strong British following and a good reputation for deep-sea fishing.

The Sands at Chale Island

The Sands at Chale Island is a beach resort offering plenty of activities and beautiful flora and fauna all around.

Kizingo is an owner-managed, rustic, barefoot beach lodge on the southwest tip of Lamu island.

Kipungani Explorer is a relatively large rustic beach lodge on the west coast of Lamu island.

Manfriday’s Mida Cove is a stylish beach lodge, suited to those who are sociable and will enjoy the engaging hosts and the convivial atmosphere they create.

Che Shale is sand-and-palm-tree beach lodge of rustic bandas, dedicated to kitesurfing and chilling out, located on a remote and beautiful bay half an hour’s drive north of Malindi Airport.

Manda Bay is a luxury beach hideaway in a remote corner of an island in the Lamu archipelago, on Kenya's northern coast. It has a huge range of water sports on offer.

The Majlis is a modern 27-room resort hotel on the beachfront of Manda island.

Water Lovers is a popular, low-key beach hotel in a central location on Diani Beach on the south coast of Kenya.

Swahili Beach is one of the biggest resort hotels on Diani Beach, with a spectacular lobby and cascading swimming pool.

House on the Beach

House on the Beach is a comfortable family-size, private beach house with a large pool set by a cave complex, and a delightful garden leading down to the beach, in a secluded spot on Tiwi Beach.

Msambweni Beach House is a secluded and luxurious boutique hotel on the southern Kenya coast, south of Diani Beach.

Lamu House is a boutique hotel on the waterfront in Lamu town, with a swimming pool, bar and terrace restaurant.

The Maji is a small, well managed beach hotel on the northern stretch of Diani Beach in southern Kenya.

Funzi Keys is a remote beach property on its own private island on the far south coast of Kenya. Rustic in style, it will suit you if you cherish exclusivity over modern design.

Tijara Beach is one of the smallest and quietest beach properties on Kenya’s coast, with a focus on rest and relaxation away from other tourists.