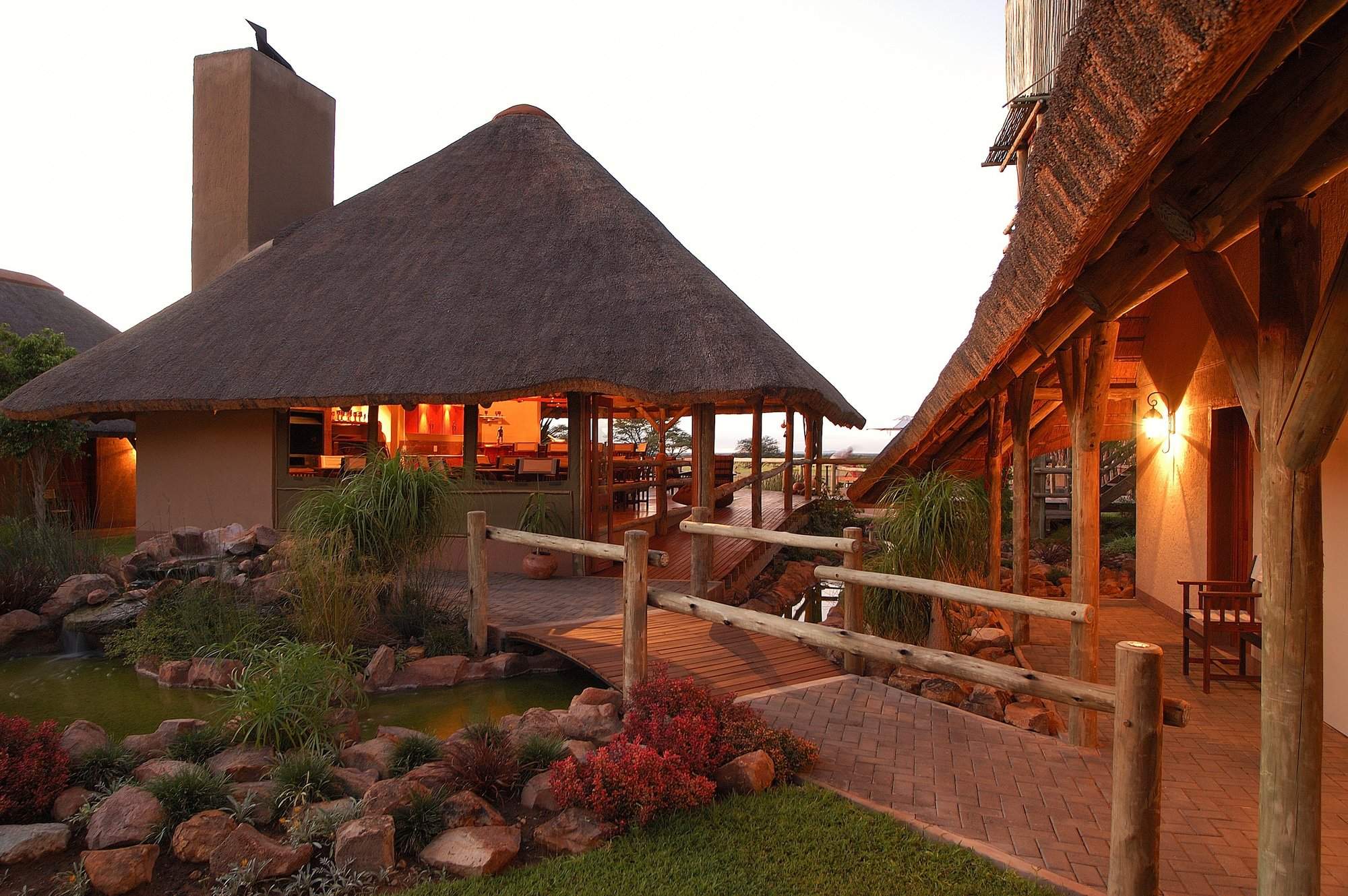 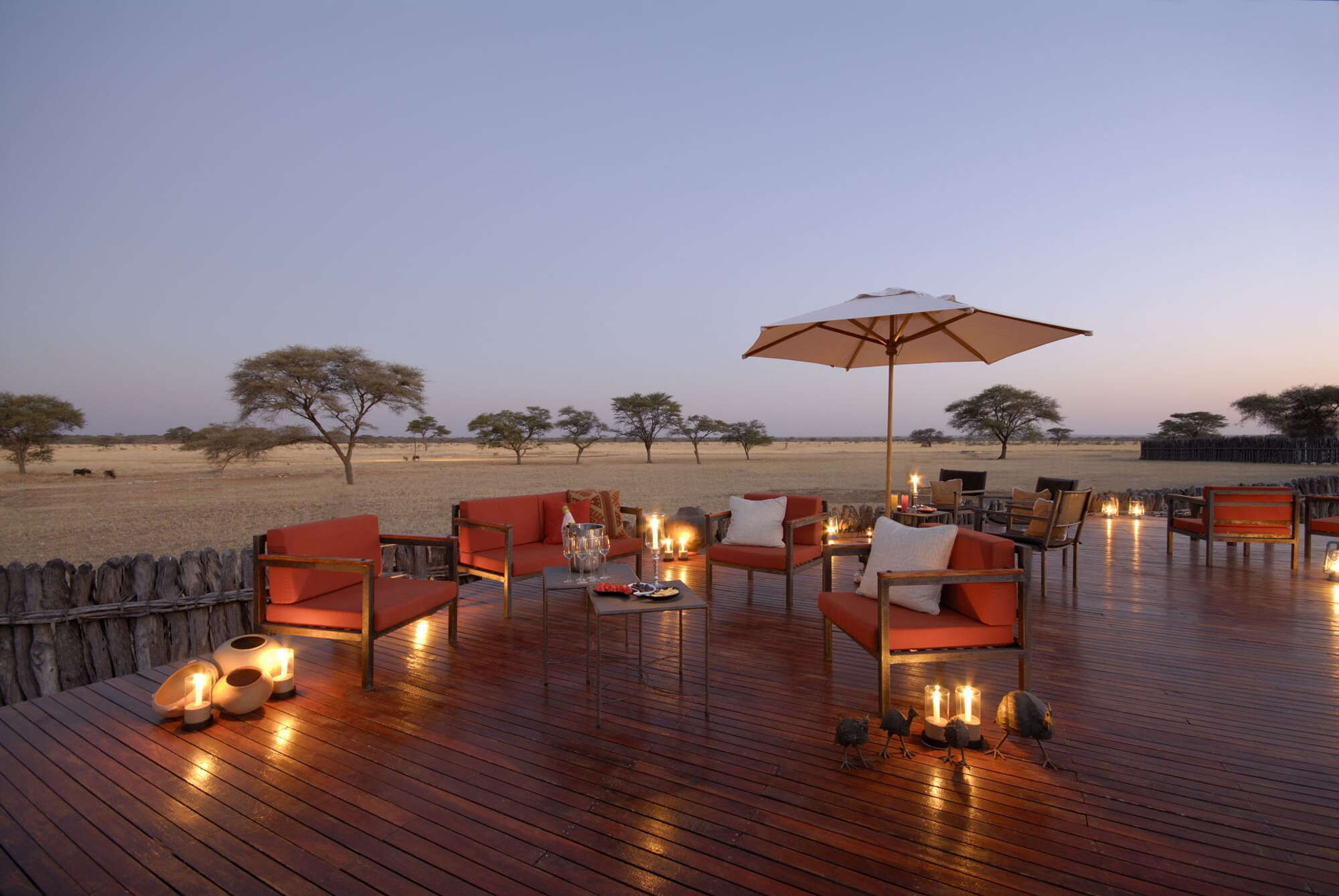 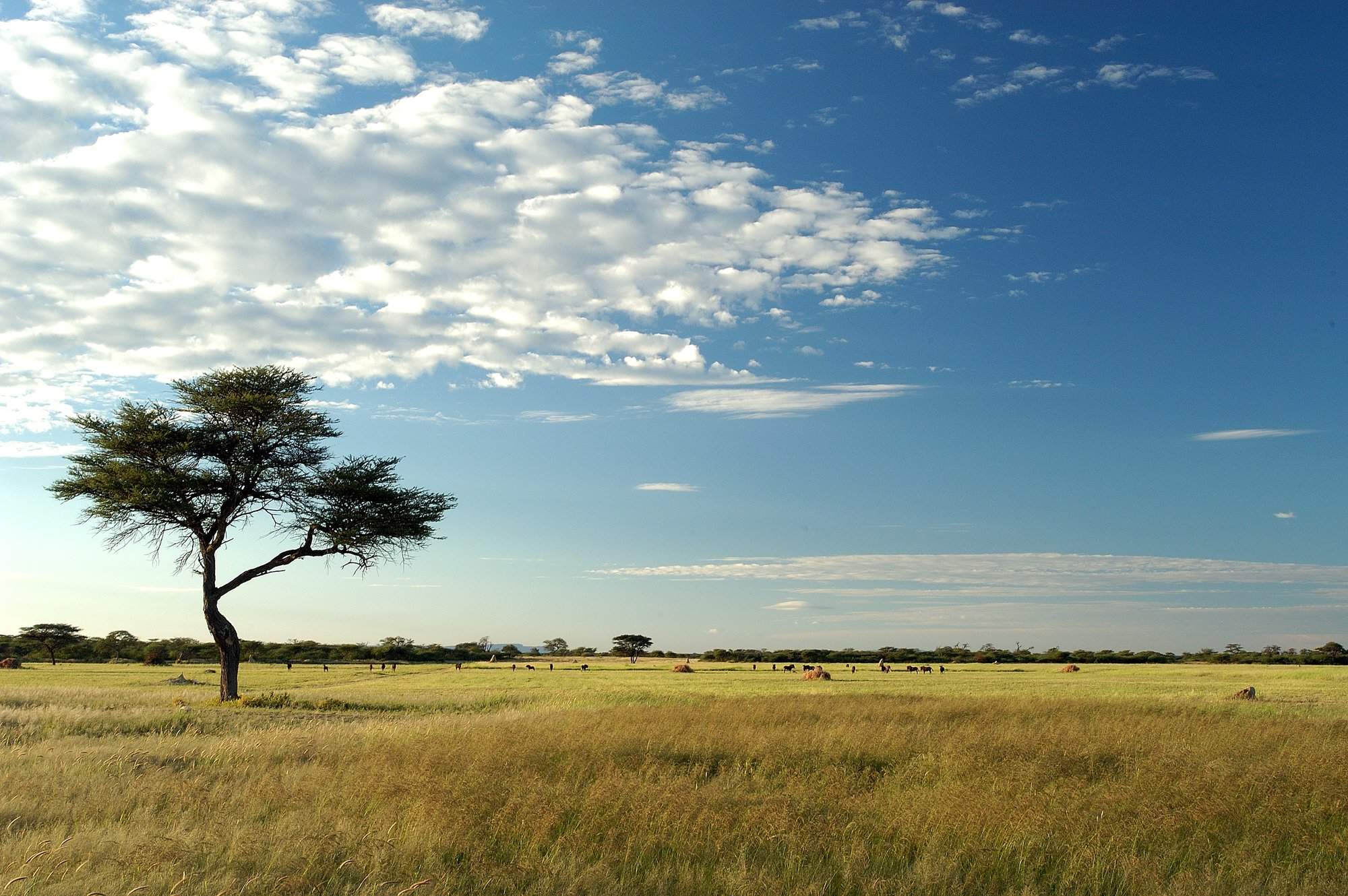 Frans Indongo Lodge is situated on a 170km2 farm in the proximity of the Waterberg Plateau and about 43km ...

... north from the town of Otjiwarongo. The lodge is named after its owner, Dr. Frans Indongo. He was born a local farmer's son who tended the family livestock during his childhood, but with a healthy entrepreneurs mind, he went to become one of the wealthiest men in Namibia. One of his enterprises was to buy the farm upon which Frans Indongo Lodge now stands. Part of the farm is still used for agriculture, but the main focus is wildlife and the property is home to species rarely seen in Namibia such as sable, roan and eland.

Although Frans Indongo Lodge has a modern feel to it, the décor is very Namibian using traditional Ovambo arts and crafts. Each of the 12 rooms is built from natural stone and covered with a reed thatch roof. The interior is spacious and light with white walls and tiles broken by the darker colours of woven Ovambo baskets, earthen pots and wooden figurines. Of the three room types, the double rooms are large and have only a shower. The family rooms are similar to the double rooms except they have a lounge area. The chalets are individual rooms with both a bath and a shower in the bathroom. All are furnished with a large double or twin beds, a desk and chair, a small fridge, television, tea and coffee facilities and an air-conditioner. Two of the rooms are suitable for families and all of the rooms have en suite bathrooms complete with a shower and a bath.

The main complex is divided into the restaurant, thatched lounge with bar and a decked terrace – all of which overlooks a floodlit waterhole. A central fire place surrounded by comfortable chairs makes the lounge a cosy spot to relax in the cooler months. The outside deck is dotted with chairs and sun loungers surrounding a pool perfect for a refreshing swim in the warmer months. Although each central area offers a great vantage point from which to watch wildlife as they drink, there is also an observation tower from where you could watch the sun set over the surrounding landscape too.

Whilst staying at Frans Indongo Lodge activities might include bird watching, nature drives and walking self-guided trails on the farm or half day visits to the nearby Cheetah Conservation Fund, the Otjiwarongo Crocodile Farm or the Rare and Endangered Species Trust to observe the Cape Griffon Vulture. Waterberg Plateau Park is also within daytrip distance.

Frans Indongo Lodge is a very well-run, comfortable, affordable stop-over with a modern feel for travellers en-route to Etosha National Park or Namibia's Caprivi Strip. We never think of it, or talk of it, as a wildlife destination - so the animal and birdlife which is here often comes as a pleasant surprise for our travellers.

Location
Central Highlands, Namibia
Ideal length of stay
Frans Indongo Lodge makes for a convenient 1 night stop for travellers heading north. Alternatively, it's within easy reach of the fascinating Cheetah Conservation Fund (CCF) and makes a great 2-night base from which to visit the centre.
Directions
Frans Indongo Lodge is situated 43 km north-east of Otjiwarongo. Turn right onto the D2433 and the lodge is approximately 17 km along this road.
Accessible by
Self-drive

Usual board basis
Half Board
Food quality
A breakfast buffet is served in the dining room, with hot choices cooked to order. Light lunches are usually a salad or a sandwich, and dinner is a three course menu served at 7pm and explained to guests by the staff. The evening main course is presented under a silver cover, the staff count down from three in their own language and then reveal the dish to you. On our last visit here we ate vegetable spring rolls, followed by steenbok steak with rice and vegetables, and marula pudding with ice cream for dessert.

Communications
There is a phone and interent access in reception. WiFi is available in the rooms. Phone reception is available.
TV & radio
There is a television with seven channels in each room.

Conservation of the worlds fastest predator

The Frans Indongo Lodge is situated amidst the African bush savannah and comprises 12 rooms – all part of a traditional Owambo complex of African rondavel huts – surrounded by palisades and connected by passages. The complex was built using natural stone, wood and reed and chalets are decorated with items specific to Owambo culture – earthen pots, voluminous storage baskets or original wooden figures.

The perfect 1-night stopover for travellers heading up-north, the lodge is a short drive away from the Cheetah Conservation Fund Information Centre, (CCFIC) which offers data and education on the world’s fastest terrestrial animal in the wild. On certain days, visitors are also welcome to watch cheetah running at full speed during their sprint-training. Symbolic donations contribute to the centre continuing its research and conservation projects. One of the key issues studied at CCFIC is the human-wildlife conflict. The main focus is assigned to finding farm management and predator control techniques to reduce this conflict, such as the use of guardian dogs for livestock.

Guests can also visit the nearby Rare and Endangered Species Trust to observe the Cape Griffon Vulture or dine at The Vulture Restaurant, which was created for observing and studying the endangered Cape Vulture.

Malarial protection recommended
No
Medical care
The closest doctor is in the town of Otjiwarongo.
Dangerous animals
Low Risk
Security measures
The main gate is locked at night.
Fire safety
There is a fire extinguisher outside each room.

Disabled access
In Place
Laundry facilities
Laundry is available for an extra charge.
Money
Euros and US dollars can be exchanged.
Accepted payment on location
US dollars, local currency, Visa and MasterCard are accepted.

In 1990 Dr. Laurie Marker founded The Cheetah Consevation Fund (CCF) with the aim of becoming an internationally recognised centre of excellence in research and education on cheetahs and their ecosystems; working with all stakeholders to achieve best practice in the conservation and management of the world's cheetahs. They based themselves near Otjiwarongo in Namibia, since the largest and healthiest population of cheetahs in the world can be found here.

The CCF believes that understanding the cheetah's biology and ecology is essential to stabilise the existing population and manage it for the future. Their approach involves conducting detailed studies to monitor and understand the factors affecting cheetah survival; then developing conservation and management policies based on these findings, and communicating these findings within local, national and international communities.

Some of CCF's past approaches have included the Livestock Guarding Dog Programme - where they bred and placed over 200 guard dogs with commercial farmers in Namibia to help them protect their herds from the cheetahs. This has helped eliminate the need for ranchers to kill cheetah and has proved very successful. They have also developed, tested and promoted alternative land-management practices such as eco-tourism. They distribute CCF education resources and lend support and training to those in countries which still have an active cheetah population.

On 22nd July 2000 the President of the Republic of Namibia dedicated the new Haas Family Cheetah Research Centre and the Carl Cathryn Hilker Education centre, which was a great moment for the CCF, and helped mark their 10th anniversary of successful and innovative ways of managing cheetahs around the world. The research centre houses a veterinary clinic, laboratory and offices; while the Visitor's Centre has a large meeting room, café, kitchen and gift shop.

Their dedication has helped to maintain cheetah populations in a sustainable way which works in tandem with human activities. This ethos is reflected in their vision - "We see a world in which cheetahs live and flourish in co-existence with people and the environment". (Read more about the Cheetah Conservation Fund…)

You can visit the CCF on day trips from nearby Frans Indongo Lodge.

In 2009 Expert Africa sponsored “The Really Wild Picture Show 2008” (run by Friends of Conservation), which raised money for The Cheetah Conservation Fund. This event helped them to gain a greater awareness of their cause.

Other lodges in Central Highlands

One of our favourite lodges in Namibia for many years, we were very sad when Erongo Wilderness Lodge closed.

The rustic Mundulea Bushcamp offers superb and varied walking in the company of a top-class guide on a reserve that features many endangered or endemic species.

A stylish and peaceful lodge, The Elegant Farmstead is a relaxing and comfortable place to break the journey between Windhoek and Etosha.

Ghaub Guestfarm is a charming guestfarm on the site of an old mission station, in an unusually verdant patch of Namibia.

For an economic, rustic option Roy's Restcamp makes for a convenient overnight stop when travelling to Bushmanland or the Caprivi Strip.

Cheetah View Lodge offers guests the chance to see cheetahs at close range and to learn about the work of the Cheetah Conservation Fund.

Ai Aiba is a simple and relatively large lodge with plenty of great walking, mountain biking trials and some spectacular San rock art.

Hohenstein Lodge is situated south of the Erongo Mountain Range. Each of its ten chalets has been built to make the most of the panoramic views.