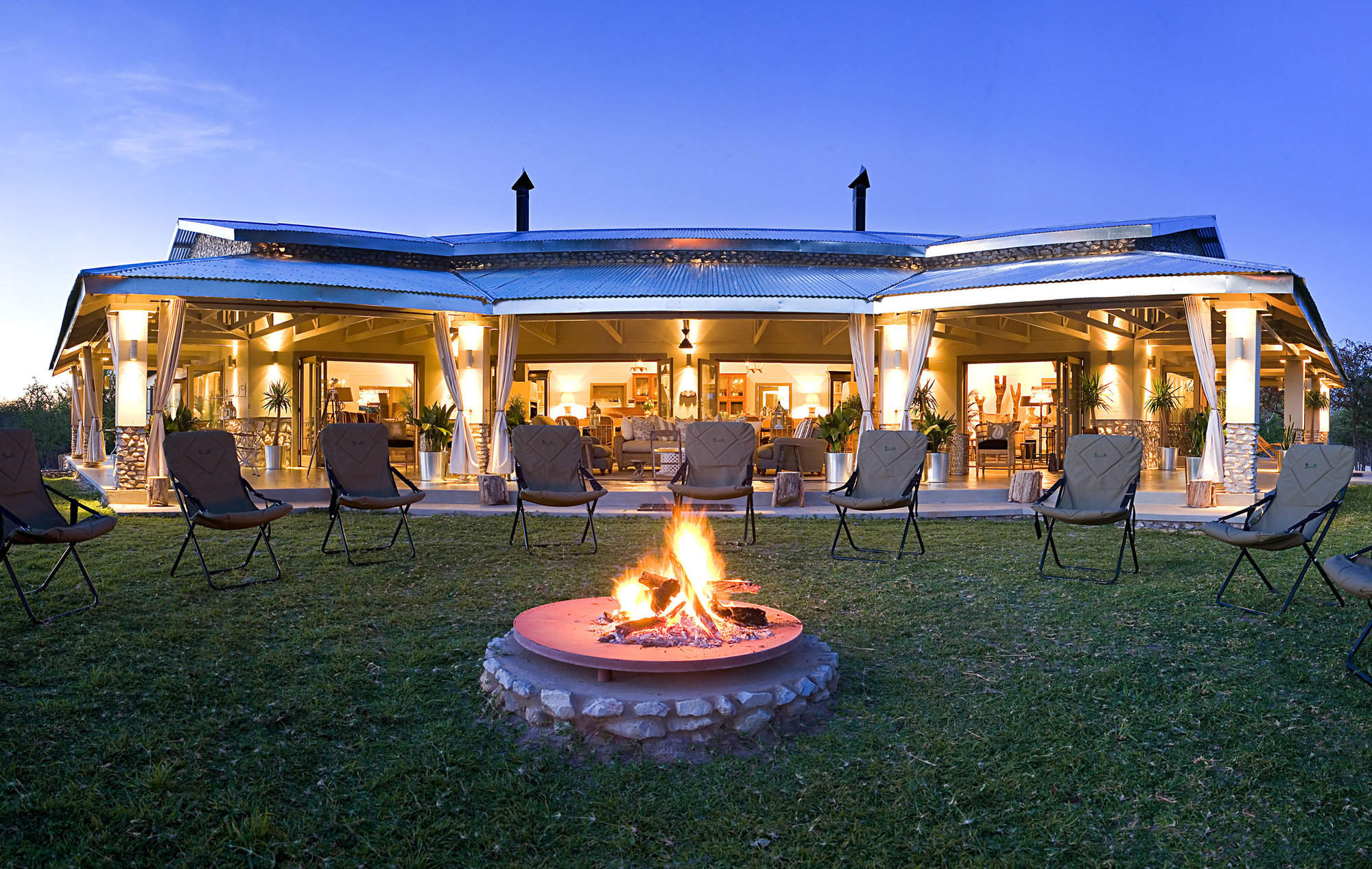 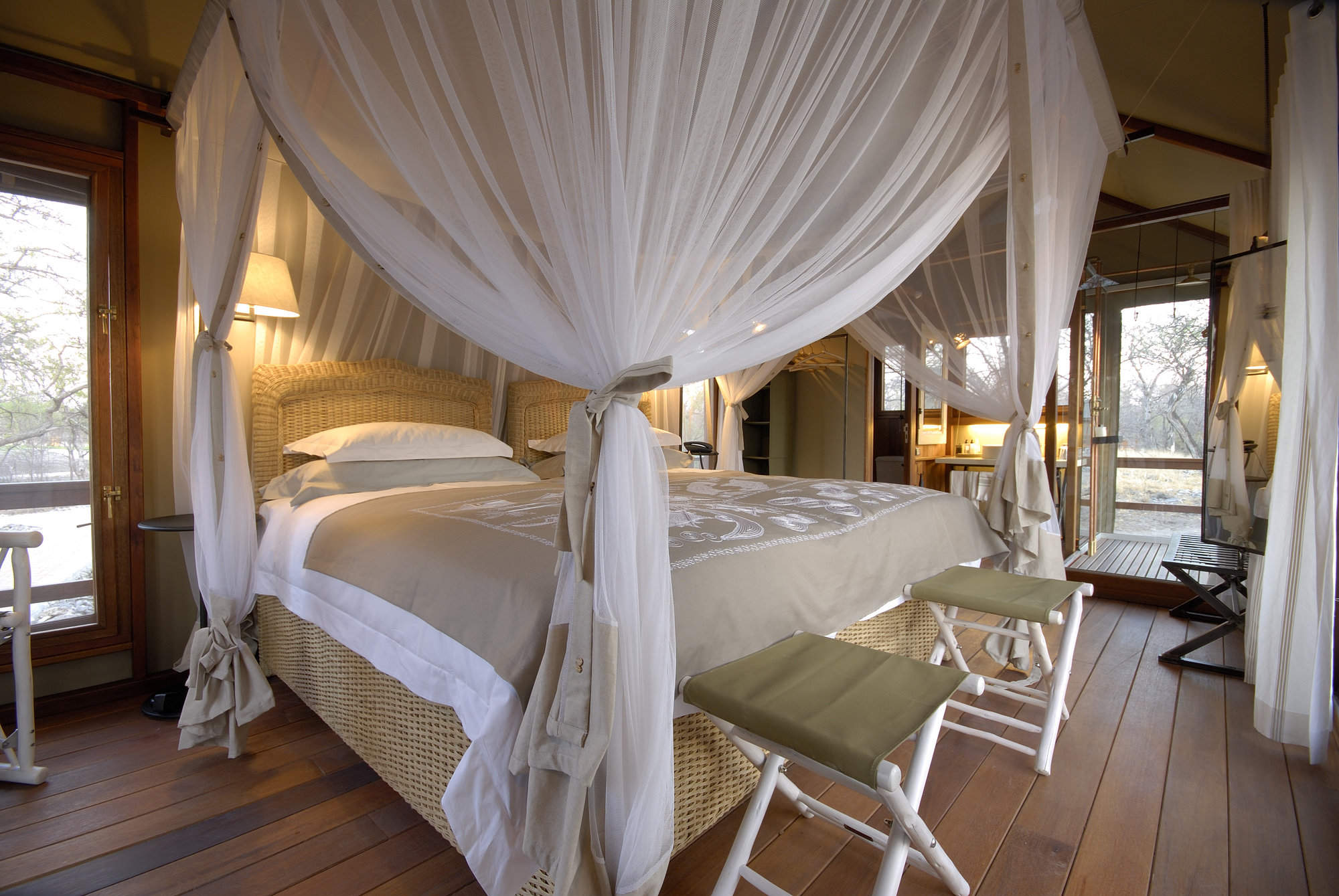 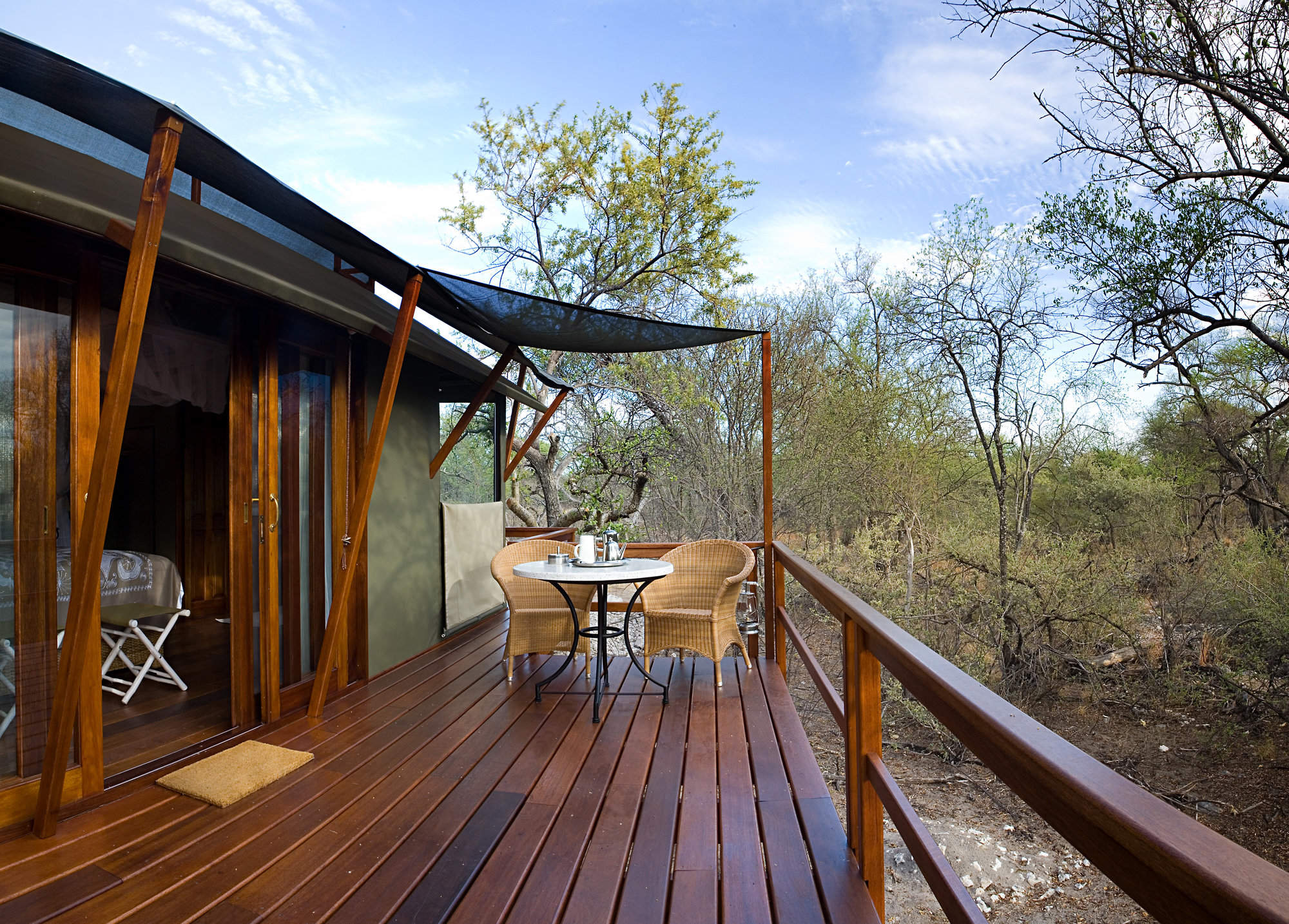 54 independent comments and wildlife information from our travellers who have visited Mushara Outpost and kindly agreed to share their thoughts. They do not necessarily represent the views of Expert Africa

1 night Arrived 10 Oct 2019
"Pleasant one-night stop after we’d spend the day in Etosha. Quick and easy to find near the Von Linquist Gate, had a feel of an old American ranch-style hotel, with lots of trees and surrounded by green well-watered lawns, very different from Etosha!

A delicious evening buffet-style bbq was served outdoors in a pretty clearing at the end of a lantern-lit walkway, very unusual and fun.

Staff were attentive and very friendly and we saw lots of different and colourful birds as well as squirrels and mongoose when enjoying our outdoor breakfast.

Could have stayed longer and would be a good base for Etosha for anyone not wanting to stay in the park itself. A recent addition here is a new waterhole a short flat walk from the main area." See all these reviews: 8n in Namibia; 4n in South Africa; 3n in Botswana
Experience Report
Overall Rating:
Good
Location:
Good
Service:
Good
Rooms:
Good
Food:
Excellent
Facilities:
Good
Mr & Mrs L
Surrey

2 nights Arrived 5 Oct 2019
"A great opportunity for a breather on a busy trip. We had a really good guided safari back into Etosha and a relaxing afternoon by the pool." See all these reviews: 18n in Namibia
Experience Report
Overall Rating:
Excellent
Location:
Good
Service:
Excellent
Activities:
Excellent
Rooms:
Excellent
Food:
Excellent
Facilities:
Excellent
Sightings Report

2 nights Arrived 1 Oct 2019
"If you had a sixth paw, our experience here would have got it.

Agita was blown away after 5 days in a car with me, a real bit of luxury. Amazing location with great staff and possibly the best breakfast cinnamon pancakes in Africa if not the world, reason enough to go back on its own.

2 nights Arrived 13 Oct 2018
"Drove through Etosha on our way to Mushara and were very disappointed in the lack of animals. Enjoyed a warm welcome at beautiful Mushara. The architecture and decor are stunning. Our room was well-appointed and very comfortable. The pool was cold and refreshing. Enjoyed a short time at the hide. Excellent dinner the first night. Better luck in Etosha the next day and a good lunch back at Mushara. BBQ for dinner all beautifully laid out in the BBQ area but the meat was dry and tough. A very enjoyable stay." See all these reviews: 16n in Namibia
Experience Report
Overall Rating:
Excellent
Location:
Excellent
Service:
Excellent
Activities:
Excellent
Rooms:
Excellent
Food:
Good
Facilities:
Excellent
Sightings Report

2 nights Arrived 10 Oct 2018
"We stayed at Mushara Outpost for two nights. The accommodation was very spacious, with your own veranda next to the woods. You often see animals going through if you sit quietly outside. It was nice and clean and quiet and you often felt there was nobody else staying there. We could get wifi in our tent, which was the first one to the right from the main building, but I believe others travellers couldn’t. The pool area was very nice to relax in between game drives, although the pool is unheated so you need to brave to go in. There is a small hide overlooking a water hole just past tent 10. We almost missed this as we asked a couple of the staff and they didn’t seem to know there was a waterhole on site! We found it on our last morning and saw a small heard of impala. It would have been nice to spend more time here, so make sure you visit it. We would say we found the staff efficient but not particularly friendly, except for Piet our guide who was very nice and a great guide with lots of amusing stories..

We had dinner in the main building one night and a boma (bbq) the second night, which had a massive buffet, which catered for everyone. We also ate lunch there and found all the food very good with good portions

We went on two morning drives and two afternoon drives. We thought it was well worth doing as our guide (Piet) was in contact with other people so they could share where the best wildlife was. By going on an organised game drive it also means both of you can relax and have a good view because you were high up. Also everyone had an edge seat so you weren't restricted in a middle seat. You also have the guides expertise of reading situations. For instance we were watching some sleepy lions under a tree and Piet had noticed a lame kudu at the other side of the water hole.

People in self drives came into the waterhole and watched the lions but then drove out again, missing the lame kudu. We had our sundowners while we watched the kudu cautiously go towards the waterhole, with the lions now alert and hunched low in the grasses out of sight of the kudu but ready to pounce. It was all very tense and we thought we would see a kill but the kudu thought better of it and turned into the forest, pursued by the lions. After about five minutes the lions returned, yes you’ve guest it, without their prey!

We saw cheetah, lions and leopards while we were with Piet too. Often they were very near but we would not have picked them out ourselves as they were well camouflaged. I would definitely stay here two nights and do the organised game drives, you will not be disappointed." See all these reviews: 18n in Namibia; 5n in Botswana; 2n in Zimbabwe
Experience Report
Overall Rating:
Excellent
Location:
Excellent
Service:
Good
Activities:
Excellent
Rooms:
Excellent
Food:
Excellent
Facilities:
Excellent
Sightings Report

1 night Arrived 6 Sep 2018
"Our stay at Mushara was short, arriving soon before dark and leaving for a long drive quite early the next morning. We did not do any activities in the grounds of Mushara apart from a brief stroll to the viewing hide (where we saw an oryx).

Staff were friendly and efficient. The room was very comfortable.

2 nights Arrived 6 Sep 2018
"We welcomed the comfort here to take a day's break from game drives and bumpy roads. There was so much activity at the small waterhole, and a comfortable hide, that we could have spent many more hours!

The tent was very spacious and comfortable with a choice of showers. One evening was a outdoor dinner in the boma, a delicious barbeque under amazing starry skies.

Our table had been littered with petals and ribbons as we were celebrating our golden wedding, a lovely touch, much appreciated." See all these reviews: 16n in Namibia
Experience Report
Overall Rating:
Excellent
Location:
Excellent
Service:
Excellent
Rooms:
Excellent
Food:
Excellent
Sightings Report

The table decoration, the card and the singing for 'my birthday' was lovely.

2 nights Arrived 24 Apr 2018
"Good lodge facilities, pleasant to eat and sit in
Nice spacious chalet accommodation
Game drive a bit disappointing – following crowds of vehicles in Etosha, although good to see a Caracal, but disappointed not to see any elephants, either here or on the whole trip (NB earlier heavy rains had caused animals to move North and no need to visit waterholes)
Final meal was a BBQ, which was not the best! Chewy chicken and bony Kudu – probably the worst meal of our trip
We felt Mushara was ‘penny pinching’, everything was an extra, even a small bottle of water. This affected our decision not to go on the final afternoon game drive and missed seeing a herd of 22 elephants!
Mean breakfasts, they split a rasher of bacon in half – reinforced the ‘penny pinching’
Our least favourite place." See all these reviews: 18n in Namibia
Experience Report
Overall Rating:
Average
Showing 1-10 of 54
123...6
Next
93%
54 reviews of Mushara Outpost by travellers since August 2007
Overall rating by our travellers
42
8
2
2
0
Filter by month