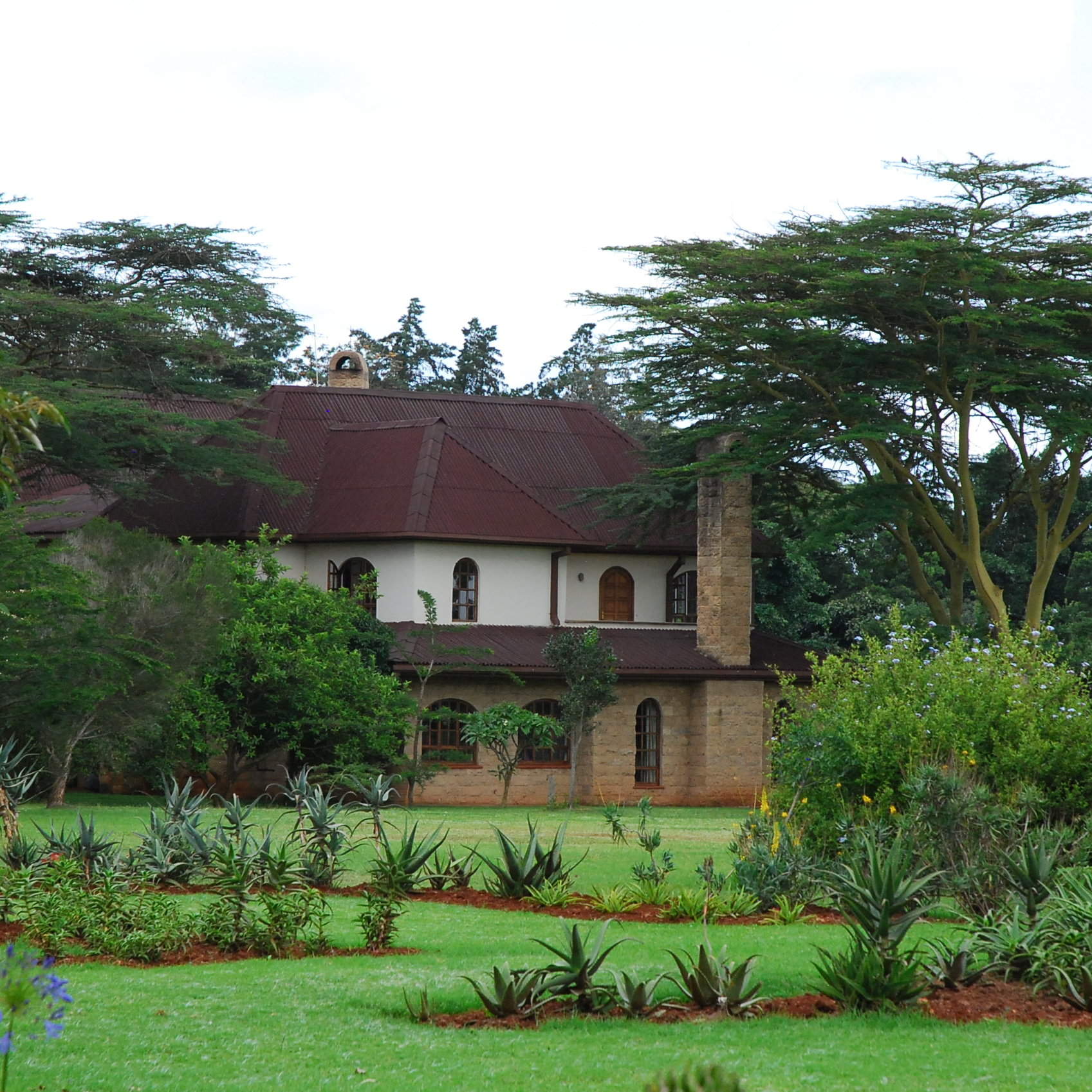 On a ten-acre plot in Langata, in the south-west suburbs of Nairobi, Hogmead is a colonial-style homestay/bout...

... ique hotel located between Nairobi National Park and the AFEW Giraffe Centre. Built in the 1970s, the house was transformed in 2010/11 and received its first guests in 2011. Unfortunately, the house closed in 2013, though it reopened for bed and breakfast guests in 2018. We will be putting up a new revised report in the near future. Please speak to a Kenya specialist at Expert Africa.

The main central areas of Hogmead are based around a lovely terrace that runs the width of the house and has views across the garden towards the Ngong Hills – usually with giraffe in the middle distance or a family of warthogs grazing in the foreground (no need for lawnmowers here). You’ll probably spend plenty of time on the terrace, but there’s a comfortable lounge and bar, and an indoor dining room.

Hogmead offers a choice of rooms, although the six rooms in the main house are the ones usually used for overnight stays. The seven rooms in the converted stable block are more commonly sold as day rooms.

The main-house rooms are all different, reflecting their former use as rooms in a family home, and the palatial ‘Mara’ room, a double room with a private balcony, is a little more expensive. Others are all ‘standard’ – comfortably spacious, well furnished, with flat-screen TVs, floor and ceiling fans, hairdryers and pull-around floor-to-ceiling mosquito nets. All the very nicely finished bathrooms include walk-in showers, bathtubs, twin washbasins and designer toiletries.

Upstairs rooms are ‘Mount Kenya’ (the second largest and also a double), and two twin/double rooms:‘Lamu’ and ‘Meru’ (which has a private balcony). The two downstairs rooms – Baringo and Naivasha – are adjoining, can be set up as twins or doubles, and are accessed off the terrace.

The stable-block rooms are plain, and much smaller but perfectly comfortable, with straightforward bathrooms consisting of a toilet, handbasin and walk-in shower.

The full range of Nairobi activities is possible from Hogmead, but visits to the DSWT Elephant Orphanage, just ten minutes’ drive away, are particularly easy (daily 11.00am–noon).

As a luxury homestay, with good food and convivial hosting, Hogmead has no equal in Nairobi. It doesn’t have the character of some of the district’s older properties, but the main-house rooms are sumptuous. It’s ideal if you’re planning to visit the national park or elephant orphanage and it’s easy enough to drive to the other popular attractions in Langata and Karen.

Usual board basis
Half Board
Food quality
The food at Hogmead is inventive and high-quality.

Large and leisurely breakfasts and light lunches tend to be the rule during the earlier part of the day, with dinner a multi-course blowout. If you have special requirements, let us know in advance and we’ll make sure they’re advised.

On another evening, the menu would look like this:
Starter: mushroom and sweet corn fettuccine with parsley and a creamy parmesan sauce.
Main course: pork loin chop with blue cheese and apples, rosti potatoes, sauted baby corn and sugar snaps
Pudding: individual pavlovas with local strawberries, boysenberry and passion fruit on a pillow of jersey cream.

Attitude towards children
Hogmead are happy to have children
Property’s age restrictions
None
Special activities & services
Babysitting can be organised through housekeeping, although no professional childcare staff are available. There’s a kids’ menu.
Equipment
Cots available.
Generally recommended for children
Hogmead is a fairly adult set-up but the garden has plenty of space for children to let off steam, though younger children will still need constant supervision.

Communications
Cellphone reception is good. There’s free WiFi all over the house, and guests may also use the house computer.
TV & radio
Satellite TV in all rooms

Malarial protection recommended
Yes
Medical care
A first-aid kit and defibulator are available. The current manager (Bimbi Dyer) is first-aid trained. Nearest hospital, Karen Hospital, is 10km away (15 mins in an emergency)
Dangerous animals
Low Risk
Security measures
The property has a security gate manned by askaris, and an electric fence.
Fire safety
There are fire extinguishers and fire-procedure notices in the rooms.

Disabled access
On Request
Laundry facilities
Full Laundry Service - Included
Money
There are safes in all the rooms. Small sums of foreign currency can be exchanged for Kenyan shillings.
Accepted payment on location
Cash payments may be made in US dollars, euros, pounds sterling or Kenyan shillings. Visa and MasterCard credit cards are accepted with a 5% surcharge.

The Norfolk Hotel is one of the oldest hotels in Nairobi and has a reputation for its colourful history dating back to 1904.

Acacia Camp is a rustic and affordable safari camp in a wildlife sanctuary a 30-minute drive towards Mombasa from Nairobi’s international airport.