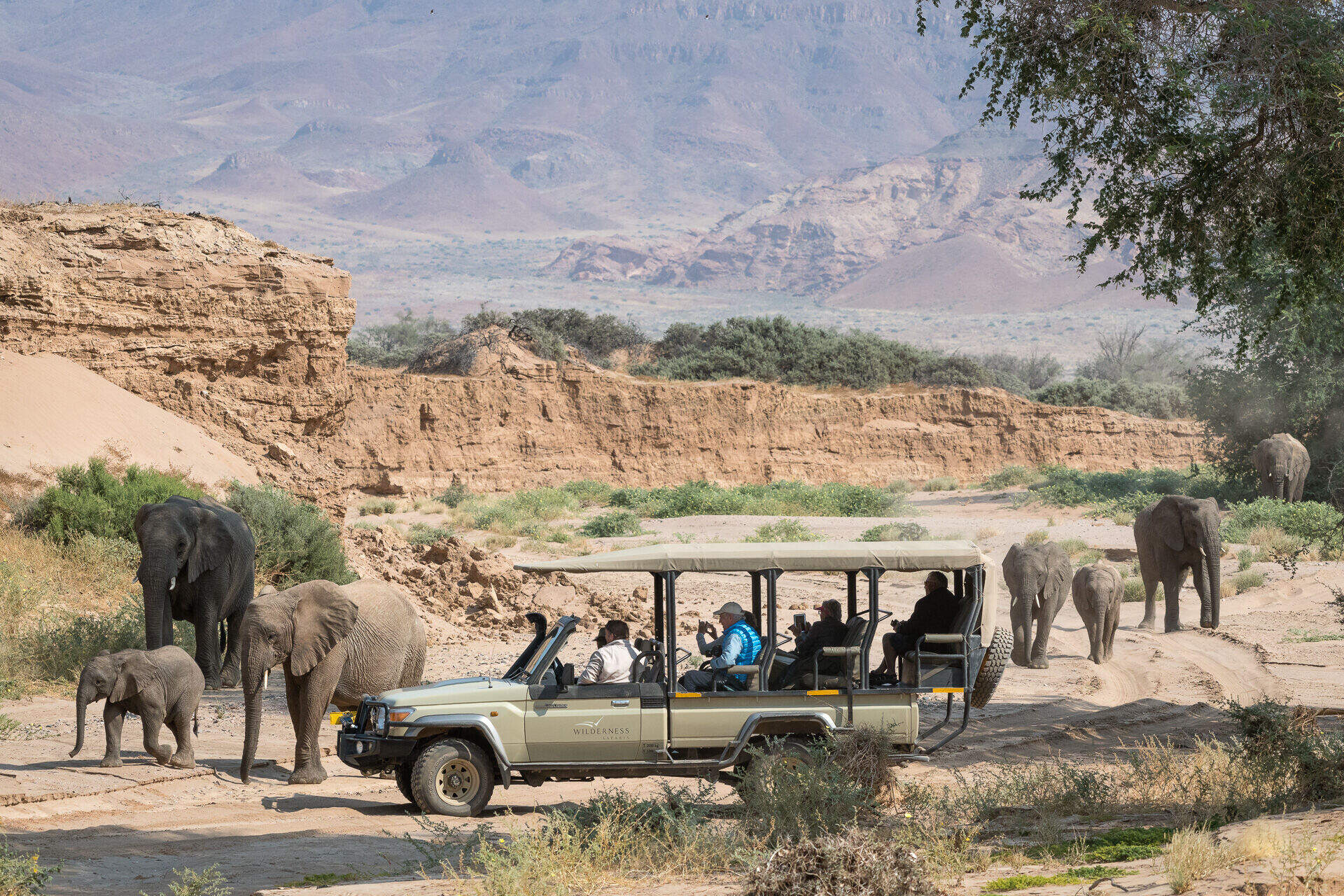 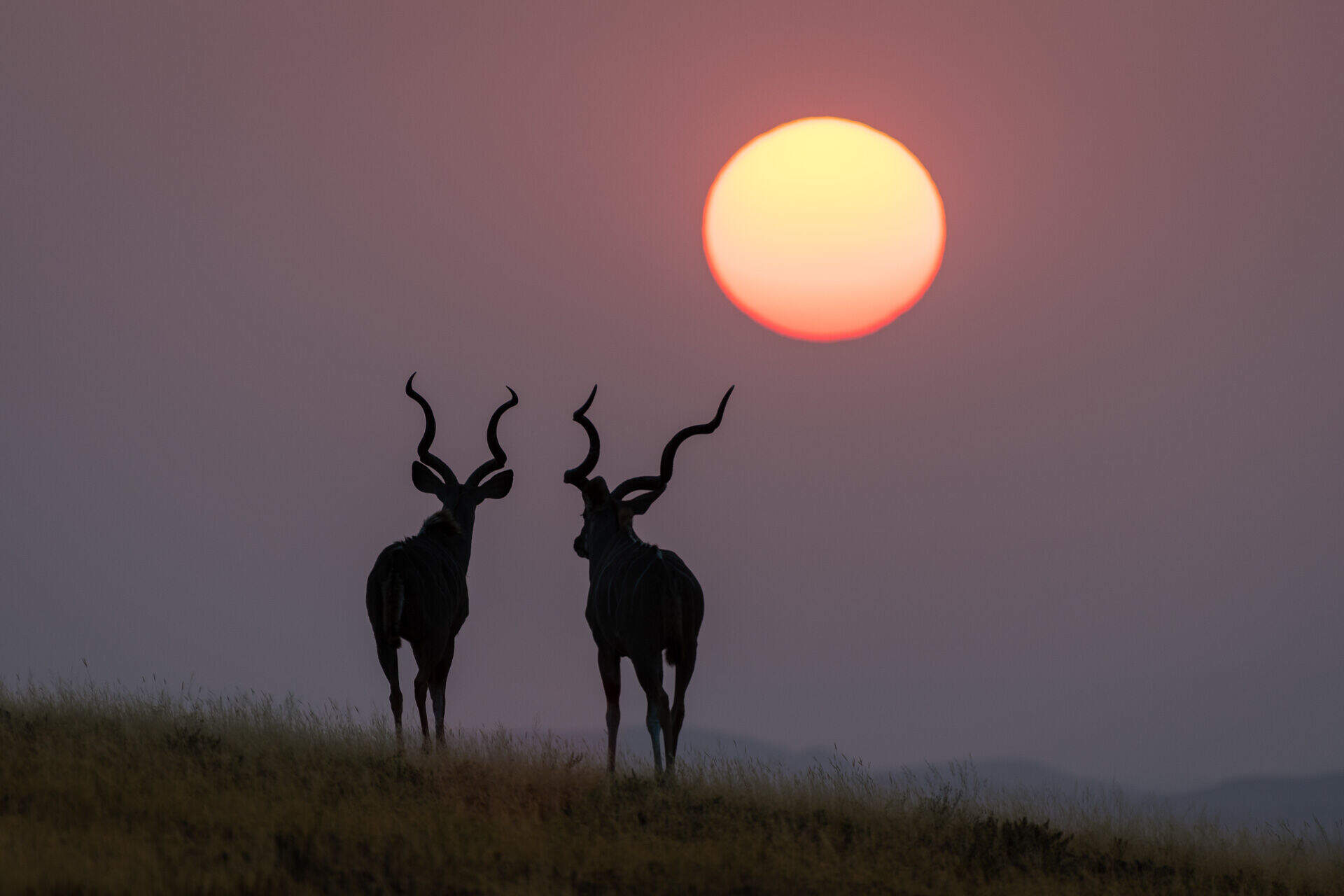 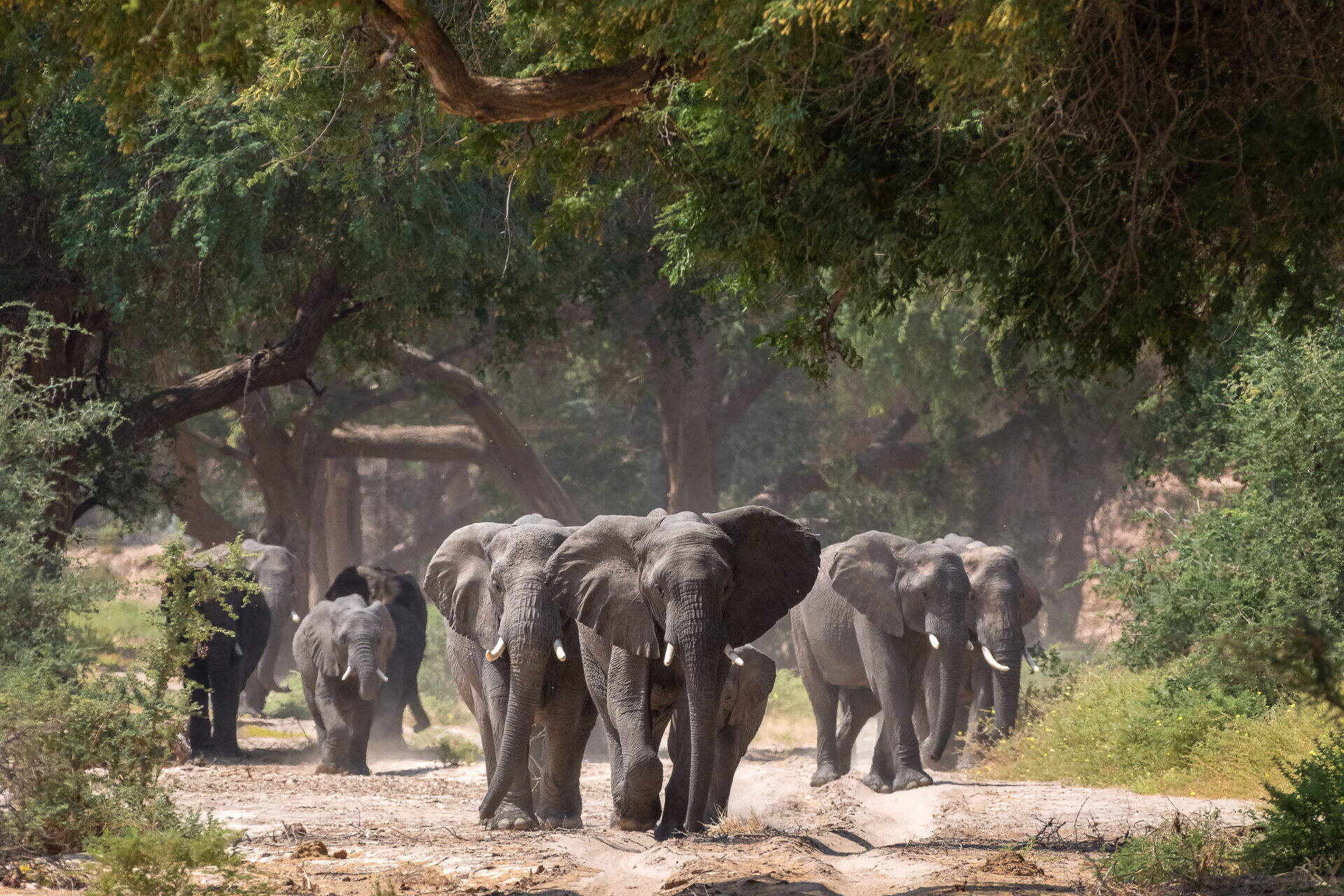 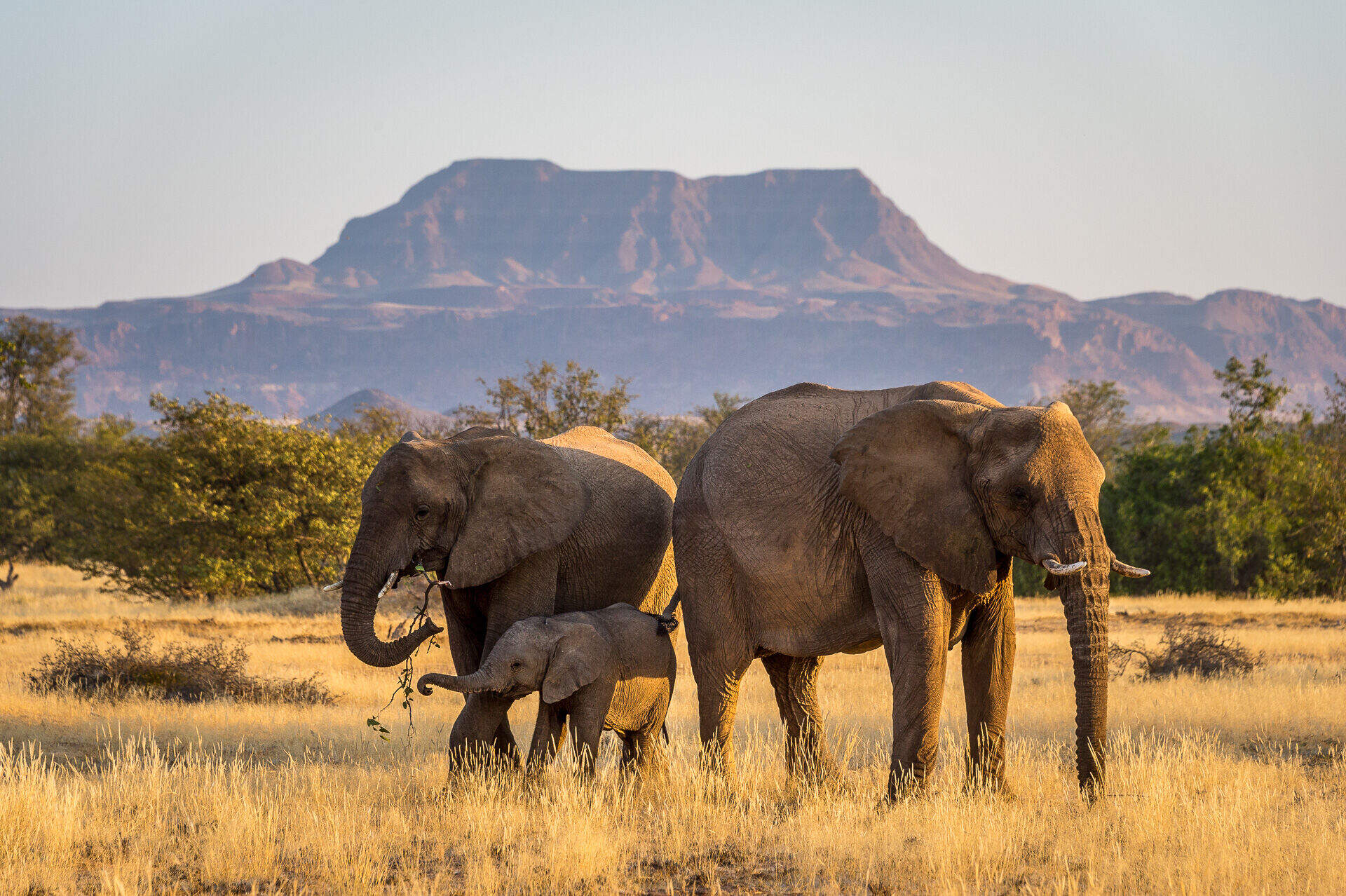 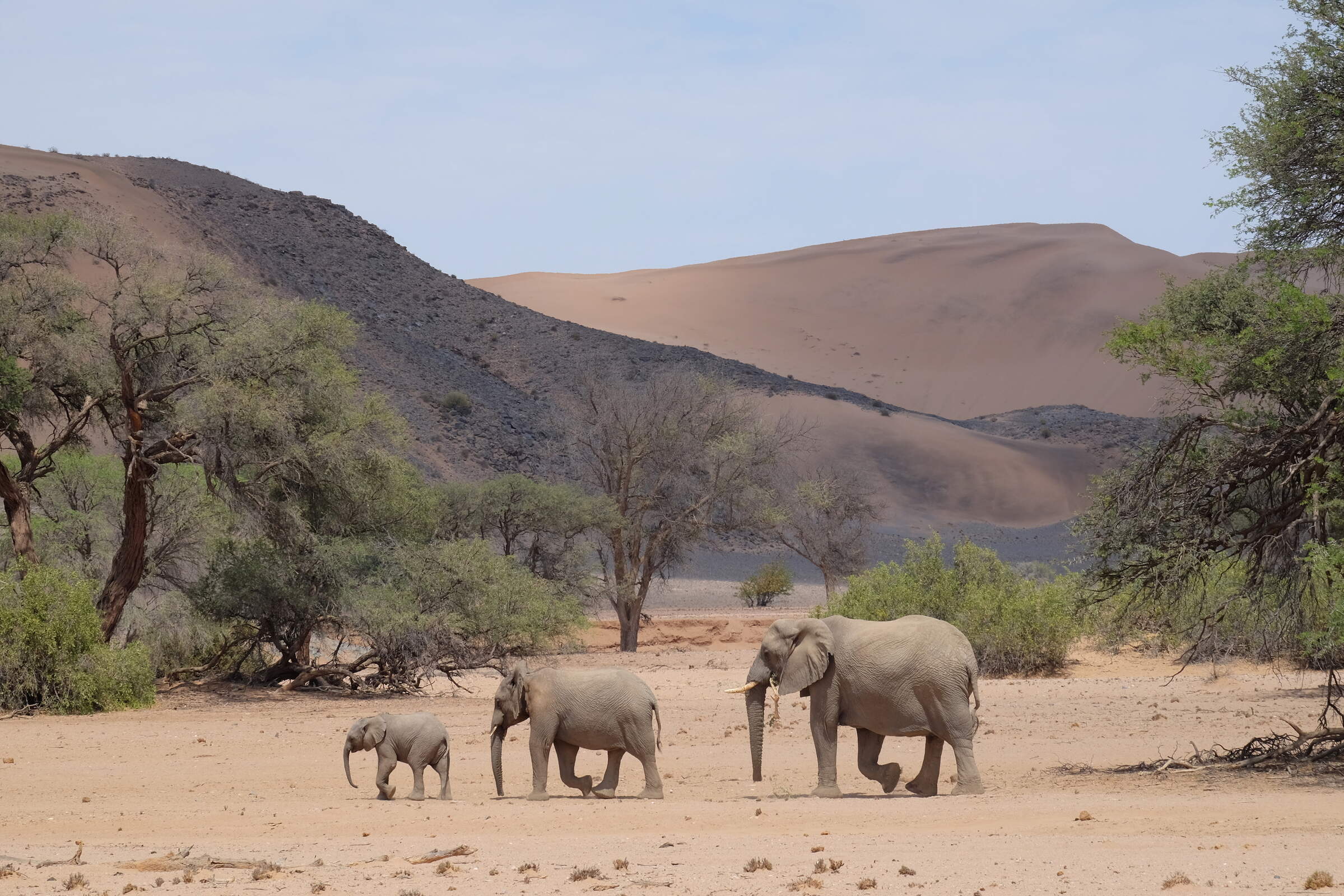 111 independent comments and wildlife information from our travellers who have visited Damaraland Camp and kindly agreed to share their thoughts. They do not necessarily represent the views of Expert Africa

2 nights Arrived 23 Apr 2010
"First impressions of the camp were very positive. The main area of the camp is stunningly designed with a beautiful dining area and pool. Cakes and tea provided at 3.00pm were much appreciated. The staff were very helpful and informative.

The rooms were beautiful but the bathroom was impractical for cold weather and the water was cold both days because there was a fault with the solar shower and it was freezing cold.

Once again there was a hard sell for the activities. The late afternoon walk was enjoyable and our guide very knowledgeable but not overly passionate about his job. We booked on the elephant tracking for the next morning which was again very expensive and were told by the staff there was only a 1% chance of seeing anything. We didn't know whether to cancel the trip or not but as there was nothing else to do we went ahead.

There was 2 people from Wilderness Safaris on the trip with us and they seemed to think we weren't leaving until 6.00am which seemed late to us as we were told 5.30am the night before. The guide didn't say anything to encourage us to leave earlier. Some locals told the guide that elephants had been spotted near the village the night before and we managed to spot the elephants off in the distance with binoculars.

We drove through some spectacular scenery, and did see some other game but nothing we hadn't already seen much closer ourselves. The guide was not informative and really didn't tell us much about anything. We were given a quick cup of coffee and a inedible biscuit before being rushed back to the camp because the Wilderness Safaris staff had to catch a plane at midday. We felt that we had left late and then rushed back to accommodate the Wilderness Safaris Staff. It was all very disorganised and unprofessional.

That evening the guide proceeded to tell us numerous times that he would not see us the next day, obviously wanting a tip. It was very embarrassing and annoying. He then said we were late leaving, once again hinting this was our fault, and that's why we didn't see the elephants. I also felt other staff were hovering about waiting for tips and felt very uncomfortable about it. We stayed at far less expensive places with far better guides who asked for nothing.

There was a lack of leadership at the camp and although everybody was very nice and friendly it was not the quality I would expect at the top end of the market. After all I had read about the camp it was very disappointing." See all these reviews: 22n in Namibia
Experience Report
Overall Rating:
Good
Location:
Excellent
Service:
Good
Activities:
Average
Rooms:
Good
Food:
Excellent
Facilities:
Excellent
Mr D&P& Mrs J&J
Essex

2 nights Arrived 20 Oct 2009
"When we arrived at the parking area for Damaraland camp, we discovered that our 4WD vehicle was capable to make the off road journey to the camp, which was a bonus for us.

The location of the camp is in spectacular scenery, and the rooms are modern and comfortable, but the lighting was somewhat inadequate. We reserved a full day for our guide Raymond to take us to Twylfontein and also to find the desert adapted elephants.

Our close viewing of a family of elephants whilst they were in transit owed a lot to Raymond's expertise. The staff at the camp gave us a warm welcome, but the level of engagement and commitment were not at the level expected by us, and that was a disappointment." See all these reviews: 9n in Namibia
Experience Report
Overall Rating:
Good
Location:
Excellent
Service:
Good
Activities:
Excellent
Rooms:
Good
Food:
Good
Facilities:
Good
Mr & Mrs B
Dorset

2 nights Arrived 14 Sep 2009
"We felt we need not to have been collected from the road, our car, a Nissan Xtrail, athough not a 4x4 did have sufficient ground clearence to drive to the camp.

We had good welcome on our arrival but the immediate pressure to go on the dessert elephant drive at what we felt was a very steep price, set us off on the wrong foot. The rest of our stay was fine but not outstanding . The Desert elephant drive was brilliant and we spent some time watching a family group which we did thoroughly enjoy but we felt at 1100$ each it was grossly over priced compared with the other trips, equally good, that we took in Namibia." See all these reviews: 9n in Namibia
Experience Report
Overall Rating:
Good
Location:
Excellent
Service:
Good
Activities:
Good
Rooms:
Excellent
Food:
Good
Facilities:
Good
Mr & Mrs L
Battersea

3 nights Arrived 28 Jul 2009
"The camp and staff were good. We stayed 3 nights ,which you have to do to see the desert adapted black rhinos. This was a terrific trip,you should perhaps promote it more.

Raymond our guide set out with us about 5.30am on a very cold morning, for about an hour and a halfs drive to the higher slopes of Damaraland. The scenery was different from the camp site, nobody else around, Raymond said he had not been there for weeks and he found us the rhinos 5 altogether, one mother and calf .

We got really close to them on foot a magic moment! We also saw alarge group of elephants and to my husbands delight hundreds of Welwitcha planst in flower!

2 nights Arrived 14 Jul 2009
"We were unlucky that it was very cold on the first night and just about impossible to get warm in bed. Otherwise this camp was not as good as the other two. There was not so much hands on by the managment." See all these reviews: 8n in Namibia
Experience Report
Overall Rating:
Average
Location:
Excellent
Service:
Average
Activities:
Good
Rooms:
Average
Food:
Average
Facilities:
Average
Mr & Mrs R
Chertsey

"A great lodge in a stunning situation"

3 nights Arrived 22 Apr 2009
"Having been here twice before in 200 and 2002, I had fogotten just how awe-inspiring the scenery in Damaraland is. Since then the camp has been re-built to good effect. We are not the greatest fans of Wilderness's lodge management, having had poor experiences, but no complaints here. Everything was good, especially the food.

Everest was great as a guide and took us to a remote area for desert rhino, the Springbok river. A fantastic, if unsuccessful trip, it did throw up some problems. Only a single spare tyre was taken on the landrover. It was needed very soon and clearly had not been checked; it was very soft. Our 2nd puncture rendered us immobile and Everest had to climb the nearest mountain to get a phone signal to enable him to summon help. This came, complete with 3 spare wheels (!), 2 hours later. Had 2 properly checked spares been taken in the first place, the 2 hours saved could well have resulted in our 1st desert rhino sighting. Fantastic desert elephant, though and a bonus cheetah." See all these reviews: 11n in Namibia
Experience Report
Overall Rating:
Excellent
Location:
Excellent
Service:
Excellent
Activities:
Excellent
Rooms:
Excellent
Food:
Excellent
Facilities:
Excellent
Mrs I & Family
Keston

2 nights Arrived 24 Oct 2008
"A well run camp, but not our cup of tea, with the basic (although new) rooms, very very hot, since facing the afternoon sun, and room 8, ours, was the hottest of all, being hemmed in by mountains and shale, so no air circulated.

Also did not like the communal table for all meals. However, the manager Paul, was the best manager we encountered, and ran a very tight ship." See all these reviews: 12n in Namibia
Experience Report
Overall Rating:
Average
Location:
Average
Service:
Good
Activities:
Average
Rooms:
Average
Food:
Good
Mr & Mrs S
Southsea

2 nights Arrived 11 Oct 2008
"Our experience at Damaraland was just amazing. The views from the rooms and the general area are wonderful. The staff very friendly, helpful and happy. the activities well organised and guide excellent.

saw so many desert adapted elephants in the dried river bed and enjoyed the evening walk which offered spectacular views stretching for miles.

3 nights Arrived 24 Aug 2008
"This was unanimously our favourite place to stay, the staff were great fun and the location was beautiful. The refurbishments done in February were a pleasant surprise, the rooms were very plush.

Staying three nights meant we managed to see desert elephants on our first day and rhino on our second day (amongst many other animals and birds) without feeling rushed. Meals were great fun, especially the bbq, and star gazing and meteors were a nighttime highlight. We would happily have stayed far longer." See all these reviews: 17n in Namibia
Experience Report
Overall Rating:
Excellent
Location:
Excellent
Service:
Excellent
Activities:
Excellent
Rooms:
Excellent
Food:
Good
Facilities:
Excellent
Showing 91-100 of 111
1...9101112
Previous Next
95%
111 reviews of Damaraland Camp by travellers since August 2007
Overall rating by our travellers
89
19
2
0
1
Filter by month