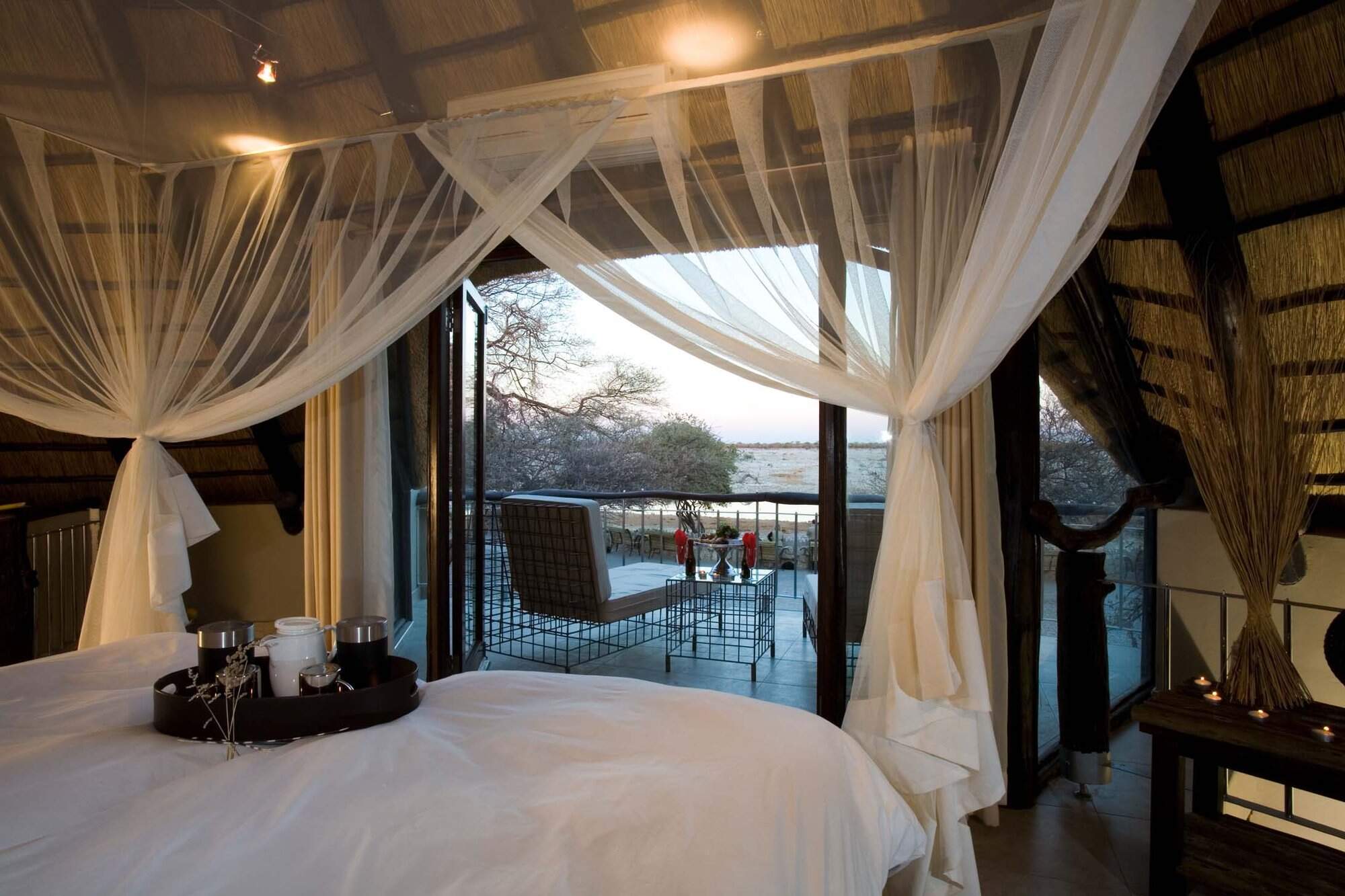 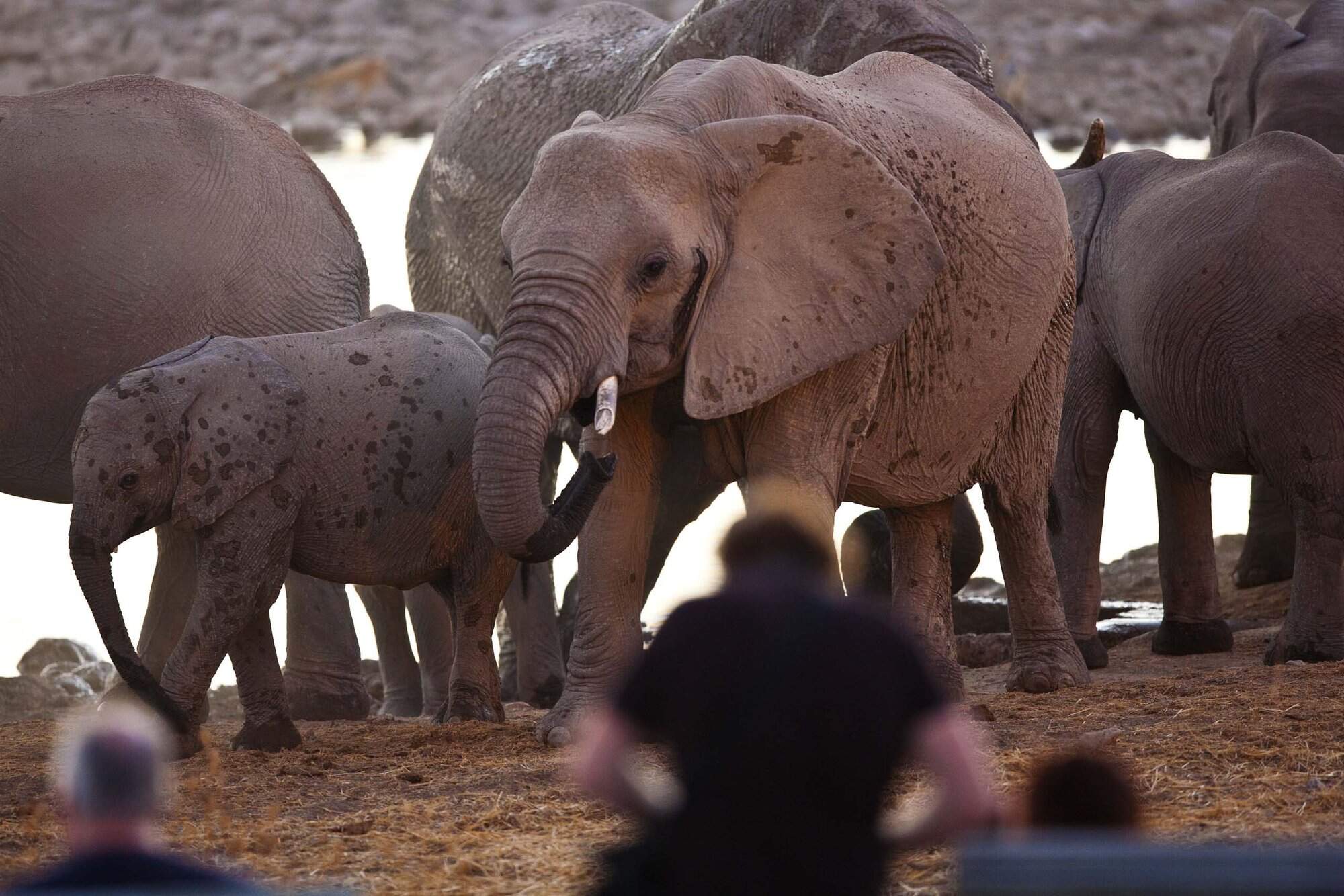 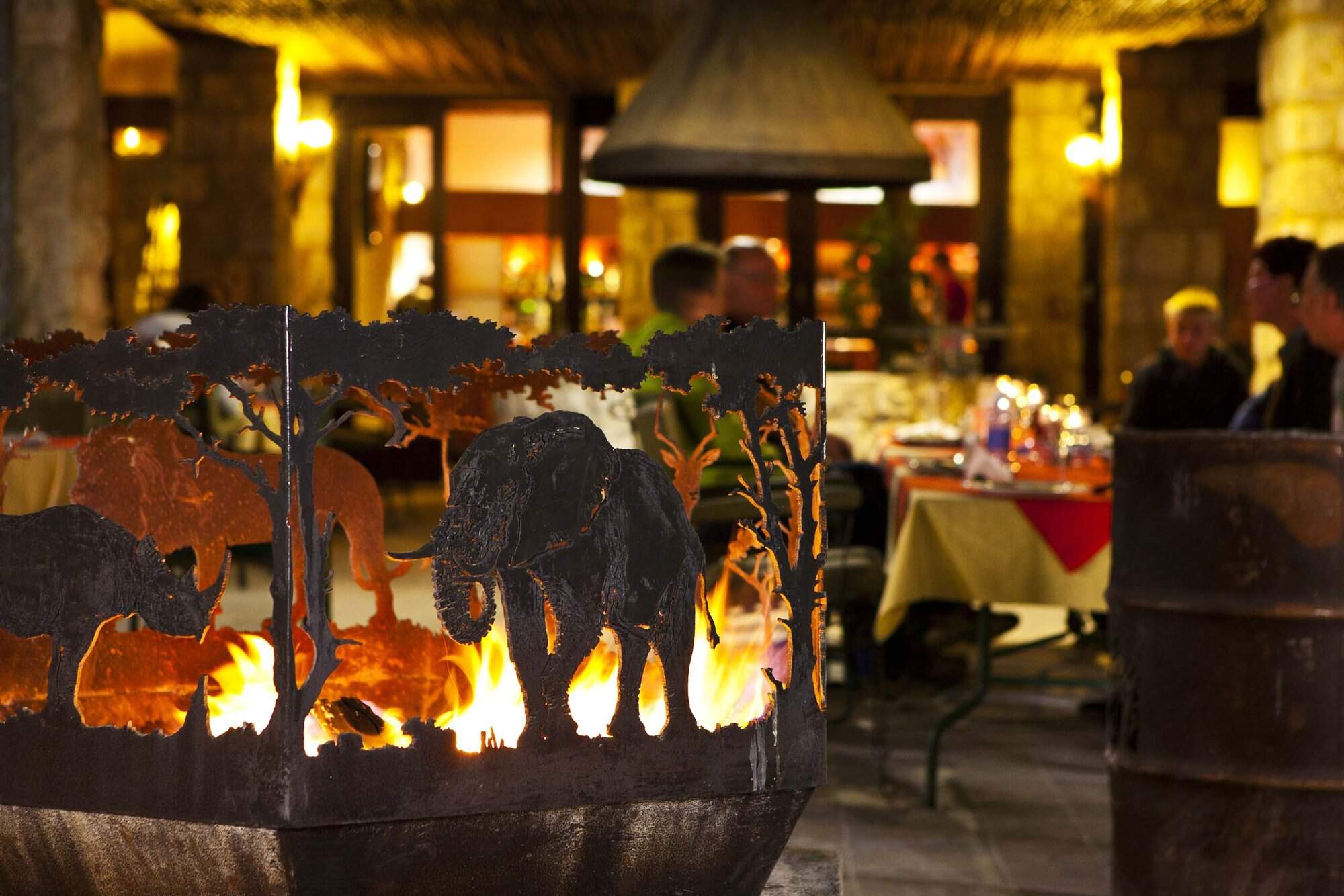 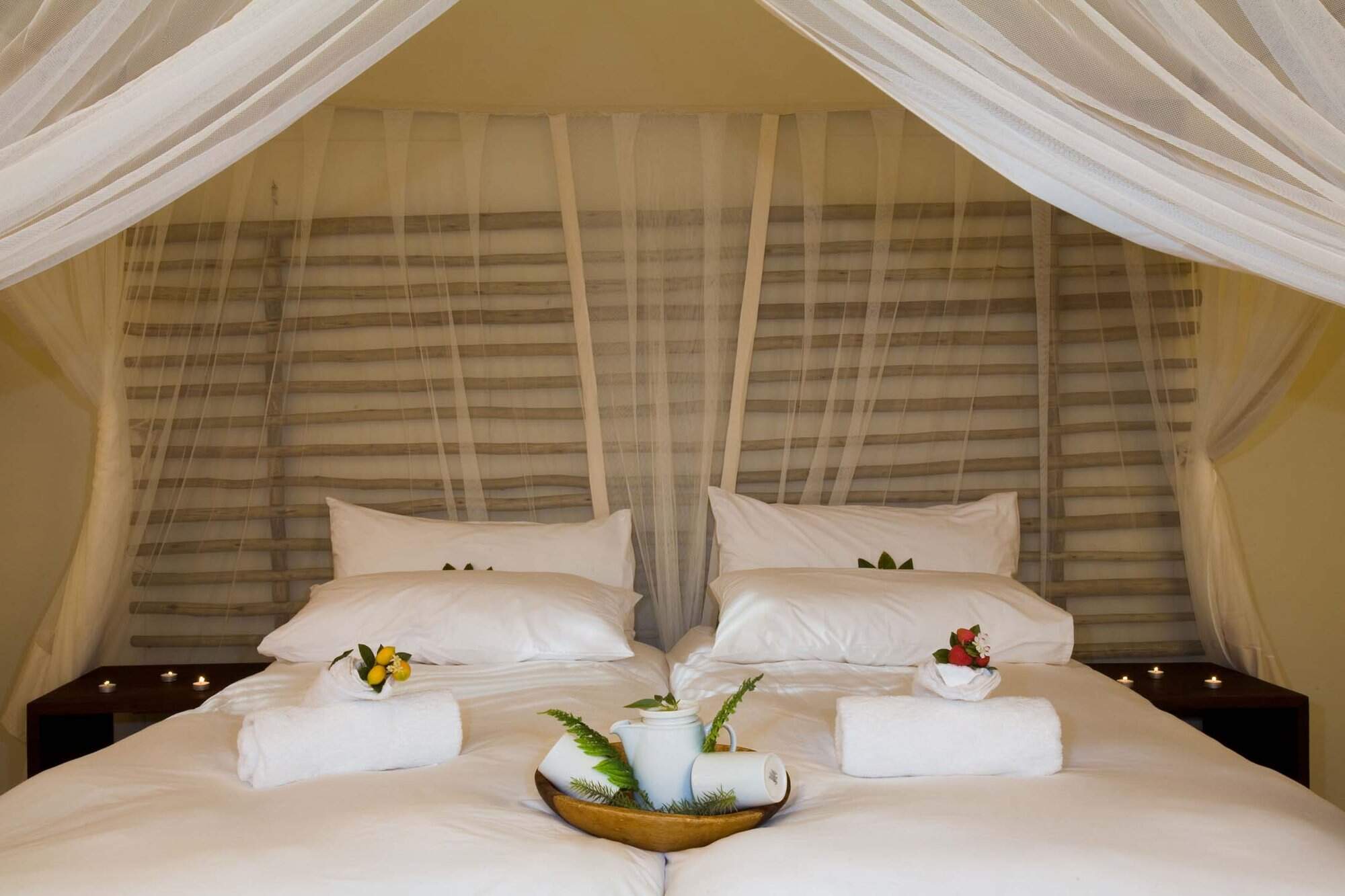 2 nights Arrived 8 Jan 2019
"We completely understand the appeal of Okaukuejo camp with the waterhole on-site and very easy access into Etosha. The waterhole was very quiet whilst we were there, but we really enjoyed sitting there after dark and watching the owls etc. flying around. The accommodation was a little tired and could perhaps do with some updating, but to be honest we spent very little time there as we were out from sunrise-sunset in Etosha!

Unfortunately, we didn't receive particularly good service whilst at Okaukuejo camp. It was very difficult to get useful information from staff both during check-in and at other times. We were told when we checked in that we would need to book a table at the restaurant for dinner. We went to the restaurant to book and they sent us back to reception to book. This happened several times and in the end our details were scribbled onto a piece of paper in the restaurant. When we arrived for dinner, no table had been booked and the staff we fairly rude to us, implying this was our fault. They reluctantly (even though there were lots of free tables around), gave us a table but we ate pretty quickly as we didn't feel that welcome! We were probably unlucky in our experience because we were treated well the next evening.

3 nights Arrived 28 Nov 2018
"The main attraction of this camp is the waterhole, which was still busy despite the recent rains in Etosha. Our waterhole chalet was modern but fairly cramped, but its position opposite the waterhole was good as we just had to walk a few yards to the seats around it. Watching several elephants and their calves bathing at 4.00am was magical!

The other advantage of the camp is that you can exit into Etosha at sunrise for an early morning game drive ( even though the deterioration in Etosha's roads in the last couple of years can make this uncomfortable). This is certainly the best time to see game.

The camp is large and can be noisy (especially from the campsite). The restaurant, although not cheap, provides reasonable food although its management is somewhat chaotic albeit the staff are very friendly.

One of the swimming pools was out of use and had not been drained and looked disgusting!" See all these reviews: 26n in Namibia
Experience Report
Overall Rating:
Average
Location:
Excellent
Service:
Good
Rooms:
Average
Food:
Average
Facilities:
Average
Sightings Report

1 night Arrived 22 Oct 2018
"We didn't get on well with this place, we found it basic and filthy. On top of it one of us was sick here without having any of their food and drinking only bottled water (we think most likely from the dirty cups in the room).

As much as we loved Etosha and seeing the amazing wildlife, Okaukuejo accommodation was not pleasant. If I knew it would have been like this I would have opted to stay outside of Etosha in a private lodge instead.

Again I realise we might have been unlucky with room allocation, we had room 72." See all these reviews: 16n in Namibia
Experience Report
Overall Rating:
Poor
Location:
Good
Service:
Average
Rooms:
Poor
Sightings Report

2 nights Arrived 15 Oct 2018
"Camp facility better than Halali, room was near the waterhole, where we spent time late into the night and early in the morning. We were never disappointed with the diverse and numerous wildlife.

We drove far to the west and enjoyed the outback as well as large Etosha pan.
We enjoyed the large selection of bird types and habitats.

"Worth staying for the waterhole"

1 night Arrived 9 Oct 2018
"We stayed here for one night and my original thoughts after reading the reviews, was I did not want to stay there. However Megan (from Expert Africa) persuaded us it was a great place to stay because of the water hole. I can now say I am pleased she did.

We checked in late because we broke down just inside the park but instead of finding difficult people, as described in other reviews we read, we found the staff helpful. Ludwiana in particular was very nice and even said our room should not be examined when we left as there was no inventory list in the room when we arrived. It certainly is not luxurious like the other lodges we stayed in but probably what you would expect from a government run lodge.

The room was a decent size and the air con worked, there was a mosquito net which covered the bed and the fridge was more than adequate for our needs. We were in a standard double room and only a few minutes walk from the waterhole. We didn’t eat in the restaurant as we bought our own food at the bakery and supermarket in Outjo, after reading the reviews. However when I passed the restaurant several times people seemed to be enjoying their food. Also speaking to others who had eaten there you can get eggs to order and the food was good.

It was great being inside the park at night, sitting by the waterhole watching the animals wander down at night. We saw a mother and calf black rhino, elephants, giraffes jackals and zebra. It was lovely just sitting there for as long as you wanted to watch them. While we were there we did not encounter people being noisy as others have found. I would say you need to get down there early to get one of the seats.

All in all I would recommend at least one night here and I think we probably should have stayed even two. Don't let the reviews put you off, give it a chance.

2 nights Arrived 4 Oct 2018
"Accommodation very tired. In need of repair and decoration. This is a large camp and very impersonal. If we did the trip again we would stay on private reserves outside Etosha and then drive in during the day. Meals are all buffet and resembled school dinners!

Only saving grace was the floodlit waterhole giving good sightings of elephant, giraffe and black rhino.

Of all the places we stayed this was the only one that really disappointed." See all these reviews: 19n in Namibia
Experience Report
Overall Rating:
Average
Location:
Good
Service:
Poor
Rooms:
Poor
Food:
Average
Sightings Report

2 nights Arrived 2 Oct 2018
"I am afraid that the quality of food at Okaukuajo is somewhat disappointing and has gone downhill from the last time we visited. The choice has be greatly reduced, the presentation uninspiring and quality poor and at the price now being charged for a meal certainly does not represent value for money. There is no alternative choice so it's just grin and bear it but you won't starve.

1 night Arrived 1 Oct 2018
"Rooms and restaurant adequate but not exciting. The waterhole was exceptional especially as we saw our first rhino in the wild.

The camp served its purpose as a base in the Etosha park with a very good floodlit waterhole.

2 nights Arrived 23 Sep 2018
"The waterhole is the only draw of this camp. the number of animals and birds visiting was amazing. Three Rhinos each night was a highlight.

Our room was a bush chalet with a braii. The chalet was quite roomy and had all we required and everything worked but it lacked maintenance. We cooked our evening meals on the braii with food we bought on the way to the camp. We also brought all plates etc that you need for a barbecue as none supplied.

The chalet was fairly near the waterhole. we had a light lunch and a breakfast in the camp restaurant which were OK. The staff were fine if you treated them with respect which unfortunately not all guests did." See all these reviews: 22n in Namibia; 2n in Botswana
Experience Report
Overall Rating:
Good
Location:
Excellent
Service:
Average
Rooms:
Average
Food:
Average
Facilities:
Average
Sightings Report