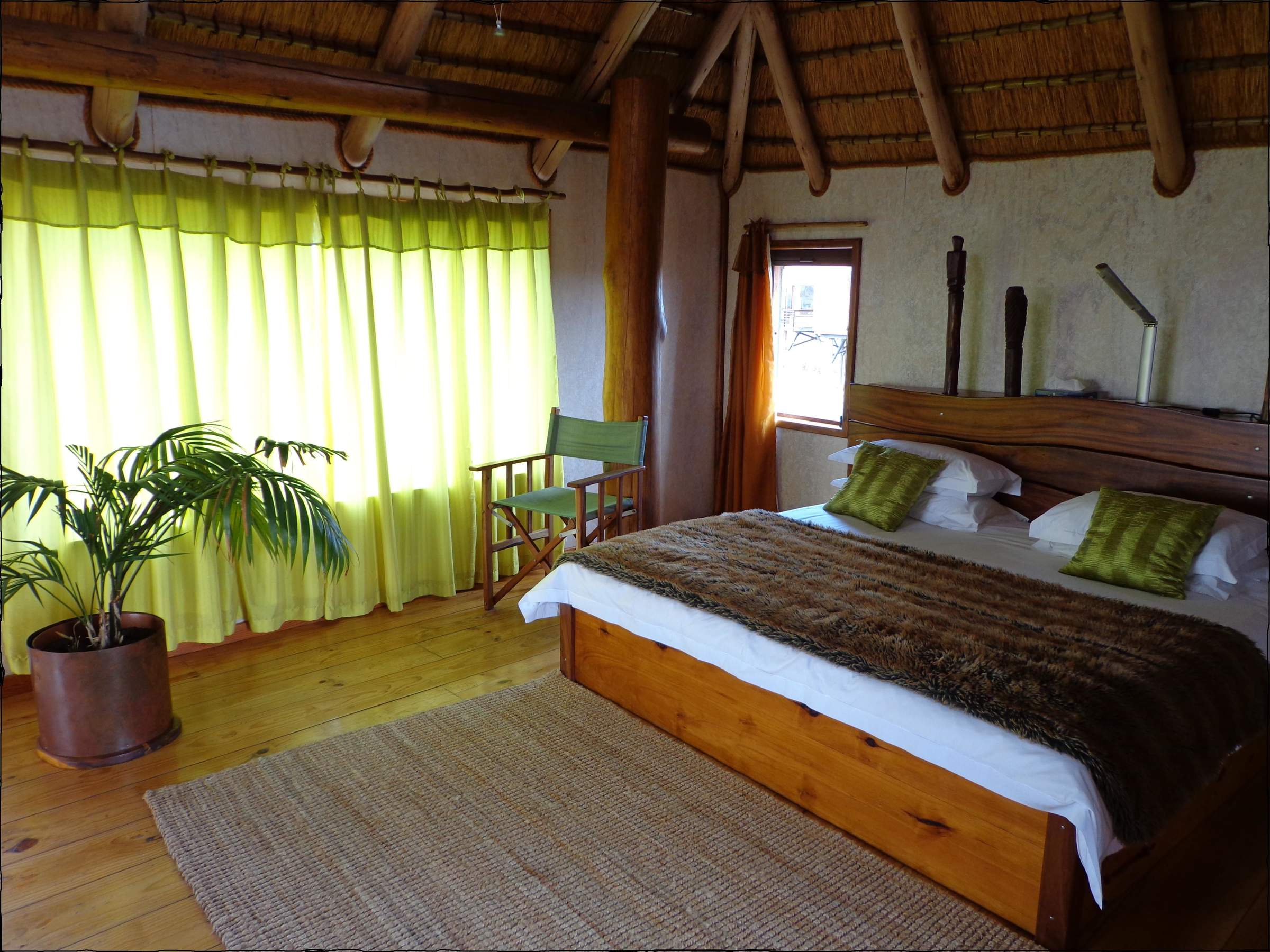 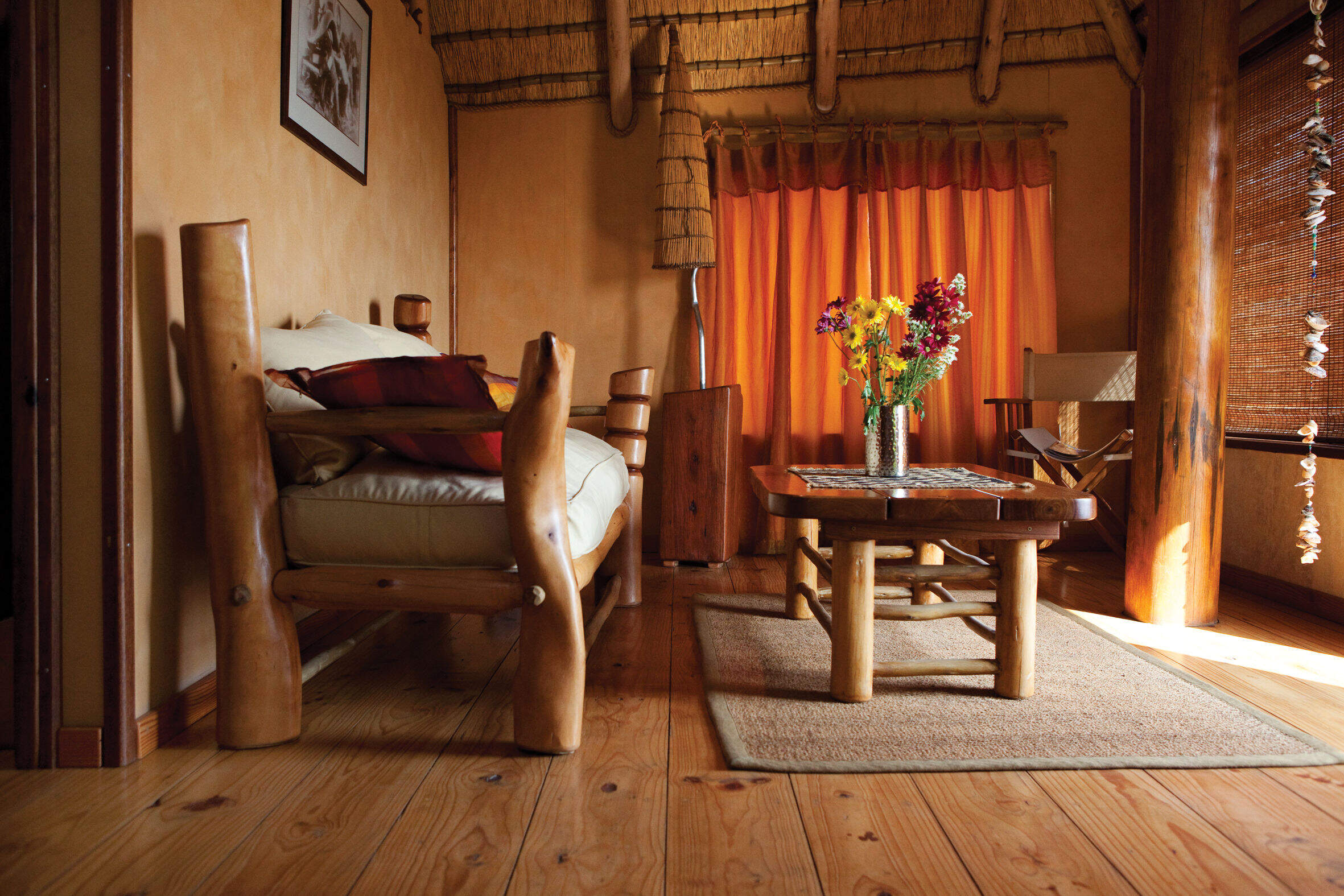 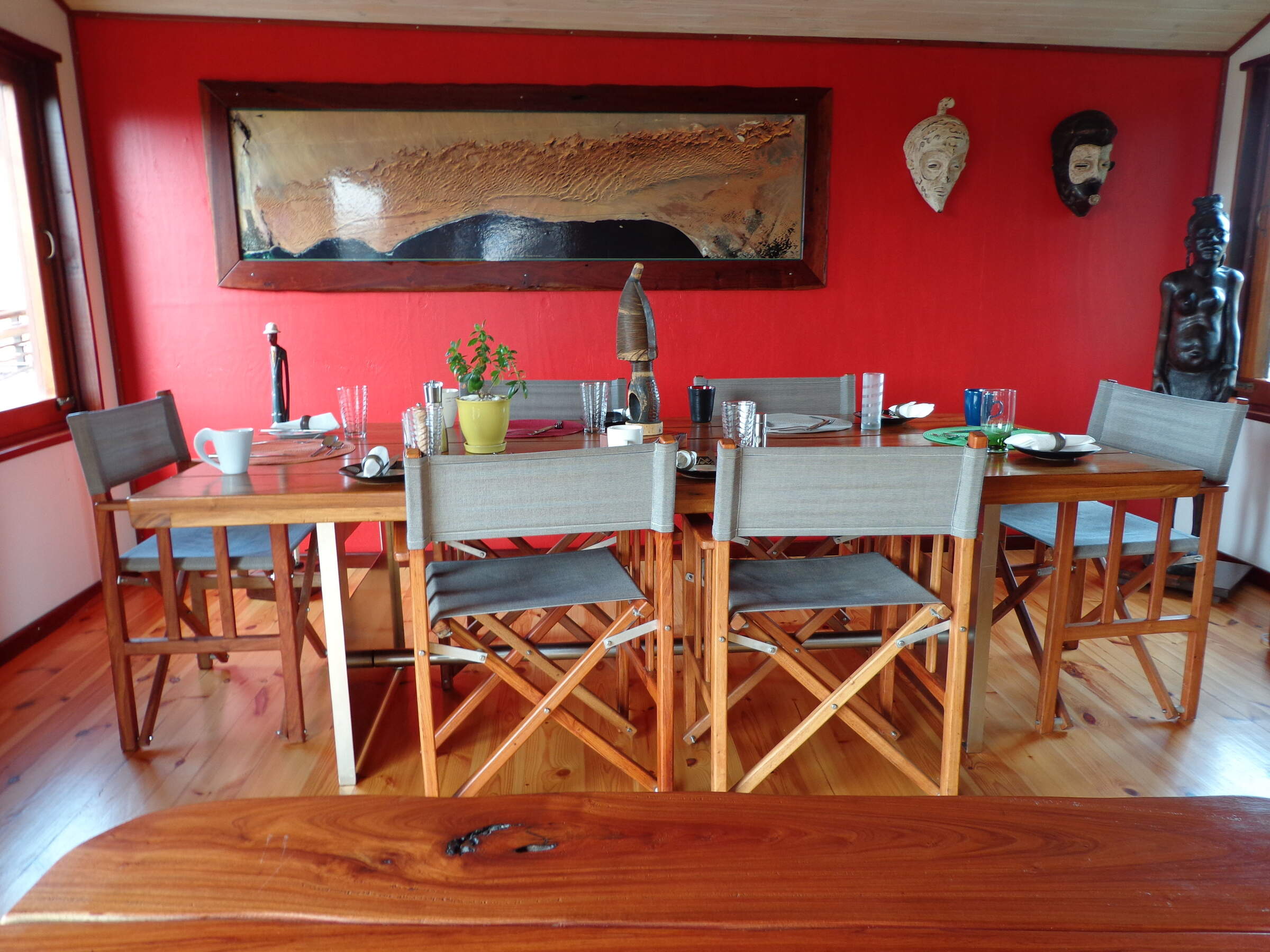 The Stiltz: Our full report

Right on the edge of Swakopmund, The Stiltz overlooks the mouth of the Swakop River and has spectacular views ...

... over the dunes or the Atlantic Ocean. The combination of these views and a quirky design make it a unique place to stay in Swakopmund.

The Stiltz has nine high-quality wooden chalets and two villas, all standing high on stilts above the riverbed, and four with sea views. Clean and comfortable, they have thatched roofs and small balconies overlooking the riverbed. Inside, fresh flowers and brightly coloured curtains, bedspreads and cushions brighten up the wooden walls, and slightly quirky fittings add an unconventional touch. (The hand behind The Stiltz was the same as that behind Swakopmund's renowned restaurant, The Tug – which displays similar quirks of design.)

Each of the rooms has a fan and heating, and a heated blanket on the bed for those cold winter nights, but no air conditioning (this is not generally needed in Swakopmund). In some, there is a small lounge area with a sofa positioned in front of a large window, and a tea and coffee station. The en-suite bathroom has a large shower and fluffy towels, and soap is provided. An honesty bar can also be found in each of the rooms with beers, spirits and soft drinks and WiFi is available in the rooms as well as the central areas.

Wooden walkways link The Stiltz’s rooms to a bright and cheery breakfast room, also up on stilts, where guests can watch the scenery, and the birds, while they eat. Though apparently infrequently used, there is also a small, informal sitting area for guests to use.

In the reception area – at ground level rather than on stilts – helpful and friendly staff can book activities and local restaurants in Swakopmund.

The Stiltz doesn't feel like a town lodge, especially if you stay in one of the far rooms, from which you can hear only the waves and the wind. Although you can see the main Swakopmund–Walvis Bay road in the distance, it cannot be heard over the waves – and the birds are a far greater attraction.

As you'd expect from somewhere on the edge of town, the surrounding area isn't lit at night. We've never viewed this as a problem – in fact we think it's quite nice! – but it does mean that most people would probably drive the relatively short distance to a restaurant in town, rather than walk.

The Stiltz is very different to other lodges in Swakopmund, with a quiet, slightly out-of-town location that makes it an attraction in its own right – although it is only a few minutes' walk or drive from the town centre.

Location
Swakopmund & Walvis Bay, Namibia
Ideal length of stay
A two- or three-night stay is recommended if you wish to partake of the activities available in Swakopmund and neighbouring Walvis Bay.
Directions
The Stiltz lies by the sea at the southernmost point of Swakopmund, at the end of The Strand.
Accessible by
Self-drive or Fly-and-Transfer

Usual board basis
Bed & Breakfast
Food quality
A substantial buffet breakfast, served from 7.00am to 9.30am, usually consists of cereal, yoghurt, cold meats, cheeses and toast, served with tea and coffee, as well as bacon and eggs cooked to order, .

The Stiltz doesn't serve food in the evening, but there are plenty of restaurants to choose from in town and the team will gladly help with arranging restaurant bookings.

Attitude towards children
Children of any age are welcome at The Stiltz.
Property’s age restrictions
The Stiltz does not have any minimum age restrictions.
Special activities & services
None
Equipment
No cots or highchairs are available.
Generally recommended for children
Although children of all ages are welcome, there are no facilities such as cots or highchairs provided. In addition, the walkways are about 3.5m above the ground, so we believe that The Stiltz is probably best suited to older children.
Notes
Children and adults alike need to take care on the high walkways, which can be particularly slippery in the mist or when it rains. Children must be supervised by their parents at all times.

Power supply notes
There is no backup if the mains power fails. There are plug points in each chalet for charging electrical equipment.
Communications
There is cellphone reception at The Stiltz. Complimentary WiFi is available to guests.
TV & radio
None
Water supply
Mains
Water supply notes
Water is solar heated. One villa has a bathtub, and the rest have showers, which are all plumbed in. The Stiltz has flushing toilets.

Malarial protection recommended
No
Medical care
There are doctors and a hospital in town.
Dangerous animals
Low Risk
Security measures
There is one security guard at night, usually on duty between 6.00pm and 6.00am. Each room has a ‘panic’ button to alert the night guard in an emergency. (This only works when the guard is on duty.)
Fire safety
Fire extinguishers are present in all rooms and fire hoses are located along the wooden walkways.

Disabled access
On Request
Laundry facilities
A full laundry service is available for an extra charge.
Money
The Stiltz does not offer a currency-exchange facility. There is a small safe in each chalet.
Accepted payment on location
Visa and MasterCard are accepted, but Amex and travellers' cheques are not. Cash is accepted in Namibian dollars or South African rands.

Other lodges in Swakopmund & Walvis Bay

Cornerstone Guesthouse is a small friendly B&B in a peaceful residential area. It's just a short walk from Swkopmund's waterfront & amenities.

Villa Margherita is a beautifully renovated B&B in the heart of Swakopmund, with comfortable, well-appointed rooms, and friendly and attentive staff.

Right on the sea front, Beach Lodge offers good standard accommodation and its own restaurant, 15 minutes’ drive from Swakopmund.

One of the larger hotels in Swakopmund, the Strand is well placed on the seafront with good access to restaurants and the centre of town.

Lagoon Lodge is a quirky little guesthouse located right on the edge of Walvis Bay Lagoon, a good spot for watching the flamingoes that frequent the area.

In a quiet residential location, Brigadoon is conveniently located for the Swakopmund waterfront and amenities.

Swakopmund Guesthouse is a family-run B&B, boasting comfortable and high-quality rooms with a maritime touch.

Friendly Sandfields guesthouse is a cosy and inviting place to stay just north of Swakopmund town centre, and is particularly suitable for families with children.

The Delight is a colourful modern hotel within a short walk of the Swakopmund waterfront and main attractions.

With a very central location in Swakopmund, the traditional Hansa Hotel is reliably good, though it is quite formal.

Secret Garden Guesthouse is well located in the centre of Swakopmund not far from the sea. With a seaside feel, it has its own small restaurant and bar.

Just north of Swakopmund, the delightful Sea Breeze Guesthouse is bright and well-looked after with welcoming and helpful owners.

Organic Square is a modern guesthouse across two properties in the centre of Swakopmund.

Not your typical Swakopmund guesthouse, Desert Breeze occupies a glorious location overlooking the Swakop River and the desert beyond.

Pelican Point Lodge sits on a remote peninsula offering panoramic views of the ocean and is only accessible by 4WD or boat.

In a quiet residential area just north of the town centre, Intermezzo Guesthouse is a comfortable and bright place to stay while in Swakopmund.

Hotel Zum Kaiser (formerly Swakopmund Boutique Hotel) is fairly large by Swakopmund standards, but has a good location in the centre of town, near to the beach.

The Namib Guesthouse is a small, modern B&B, set in Swakopmund's peaceful Kramersdorf area. It's just a short walk from the coast and many amenities.