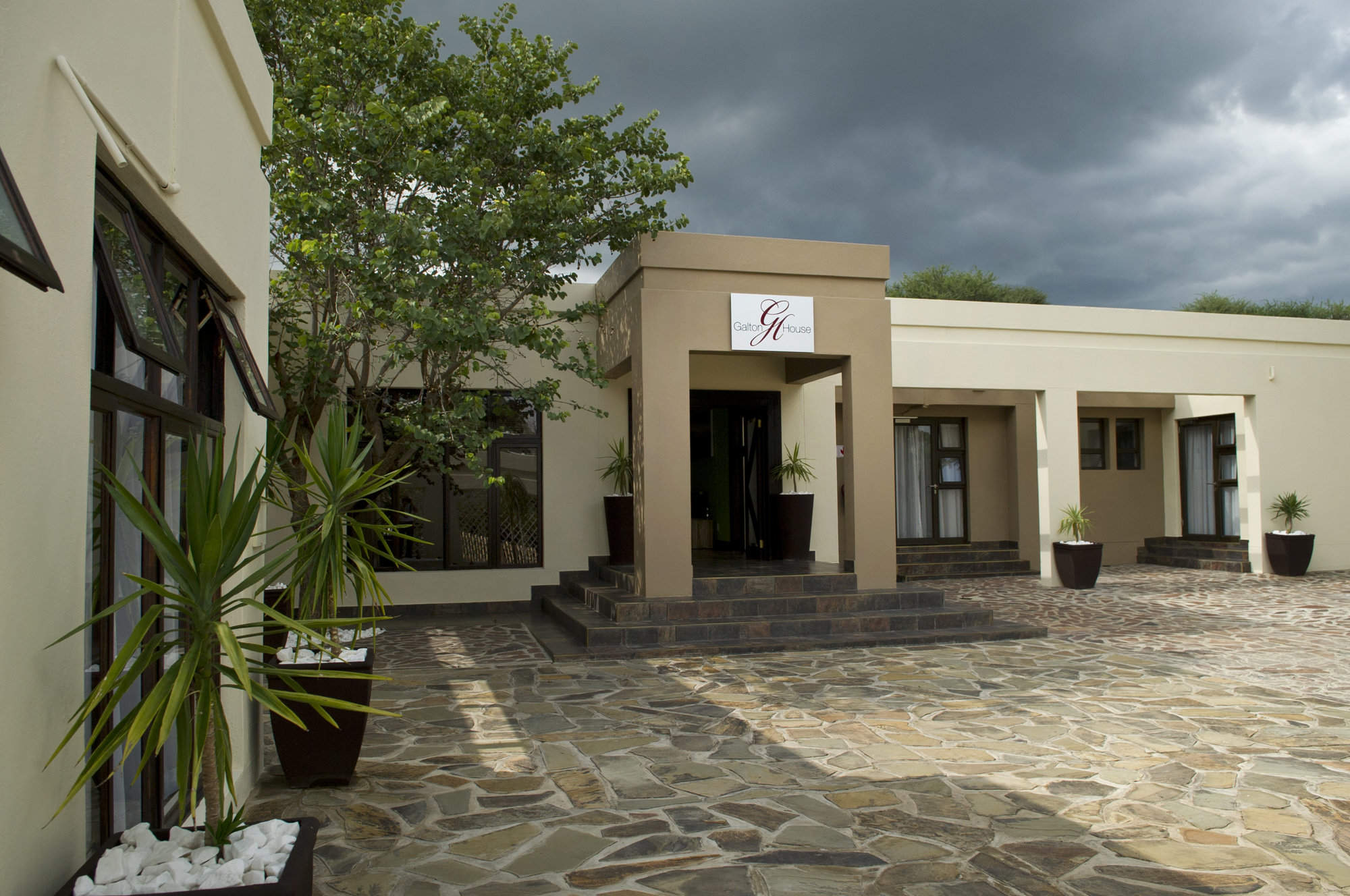 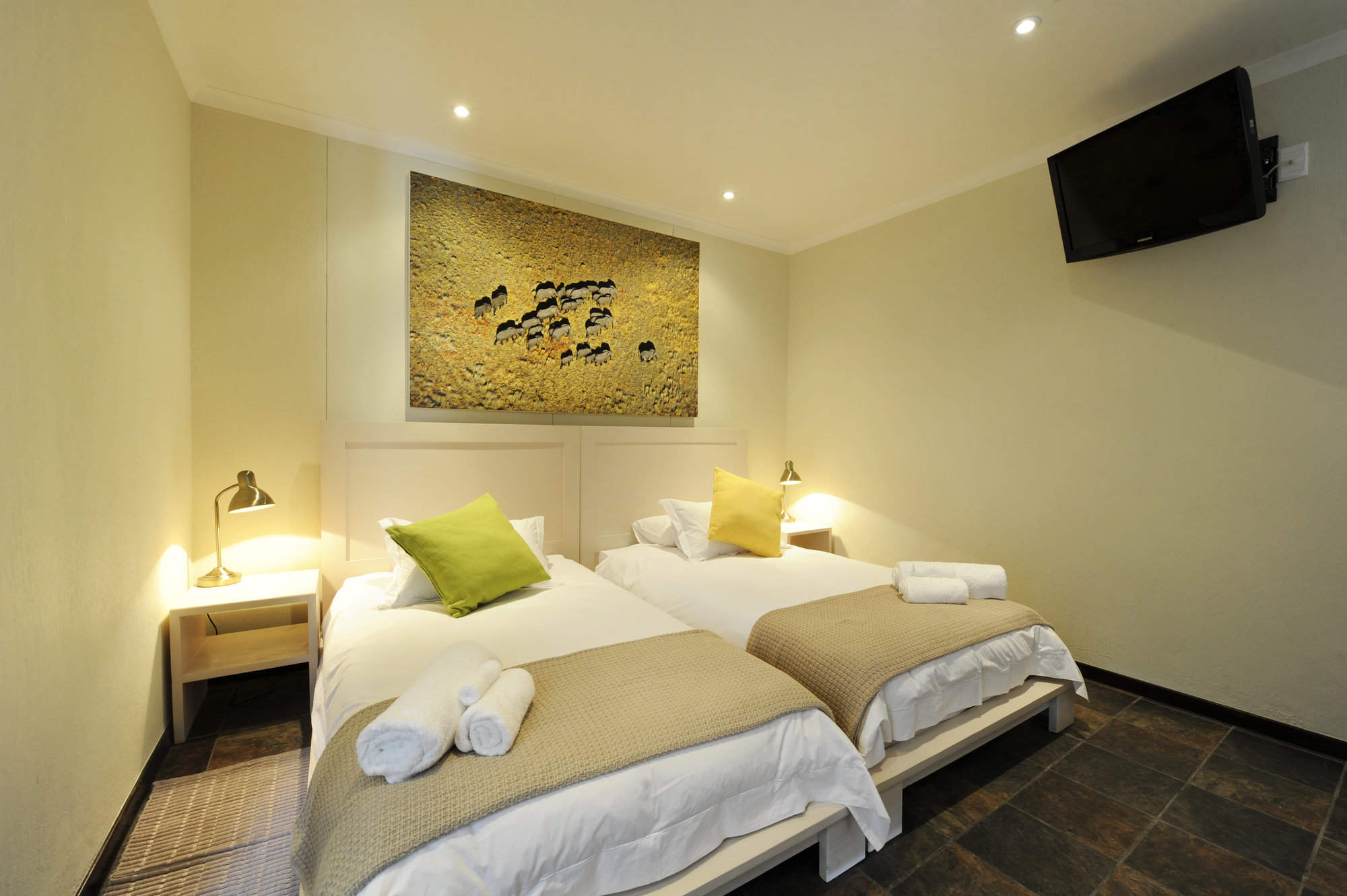 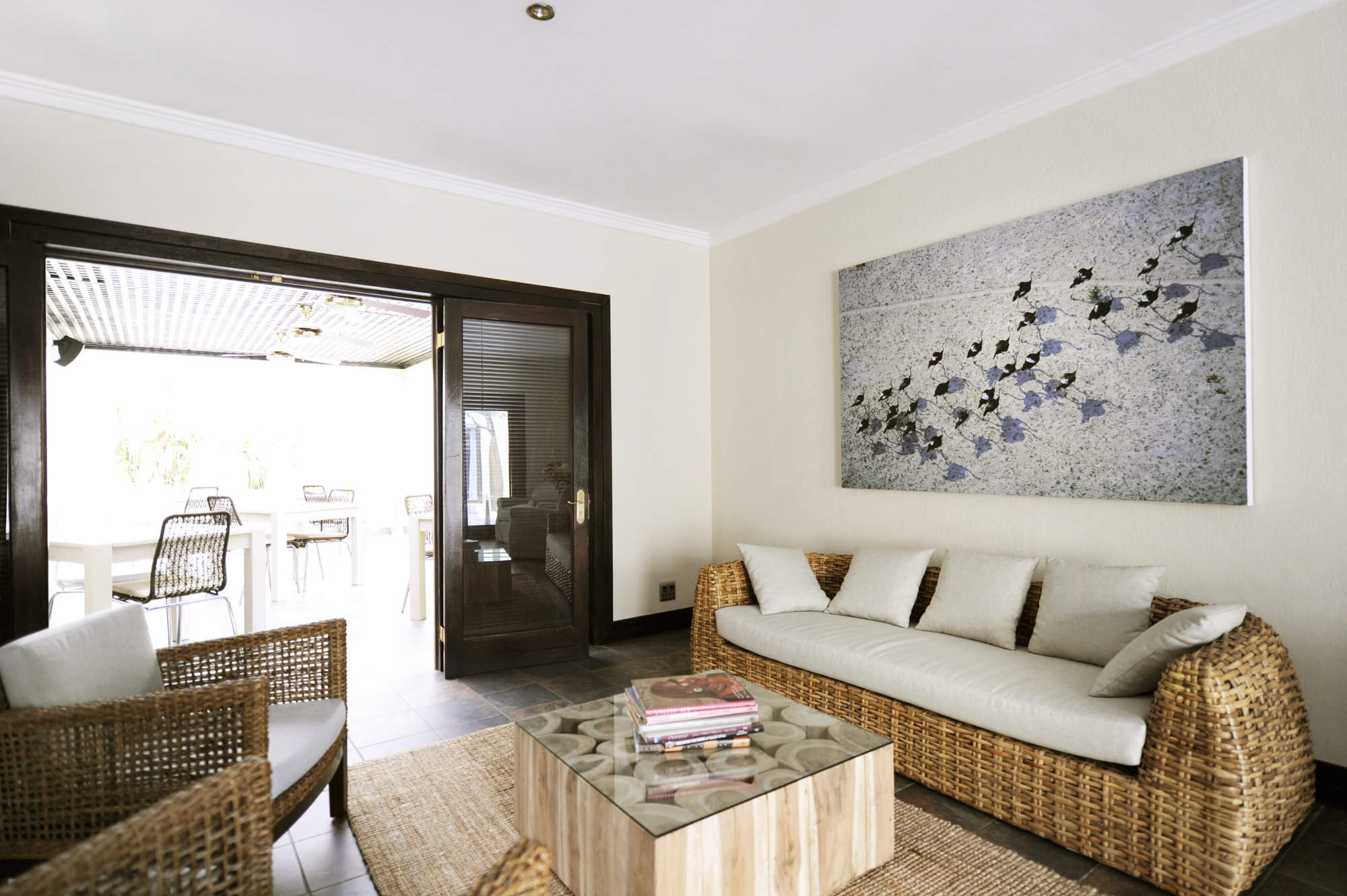 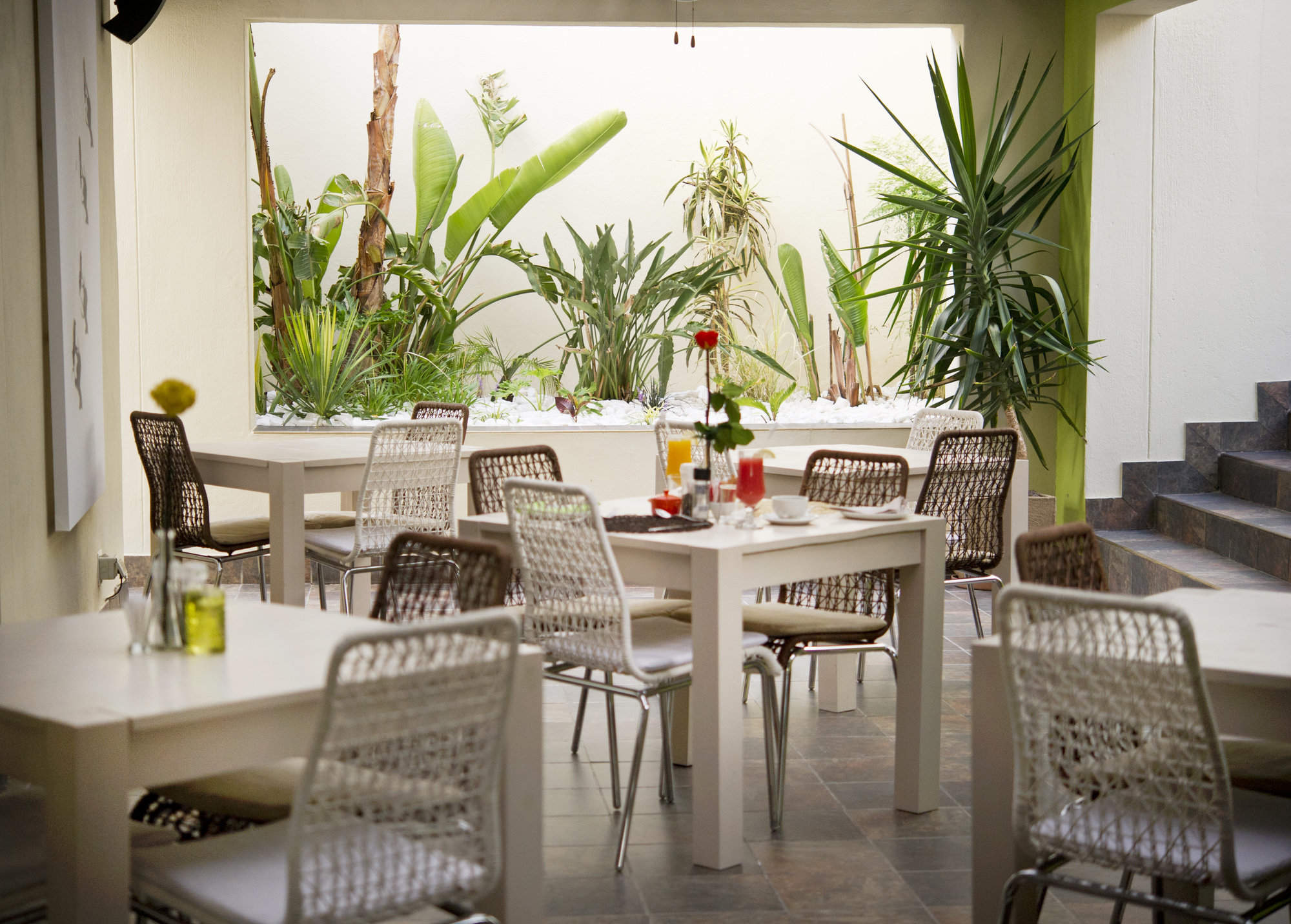 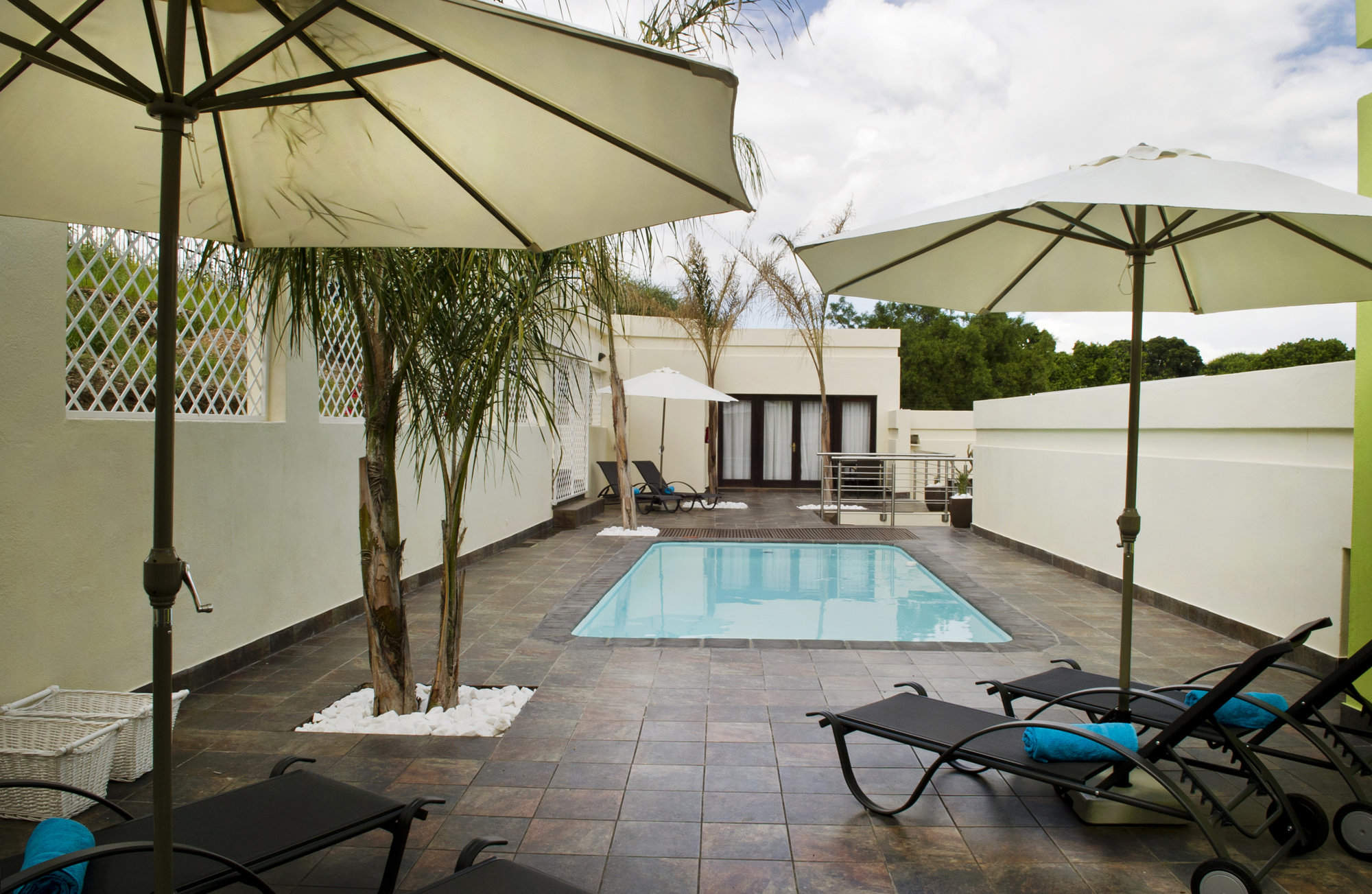 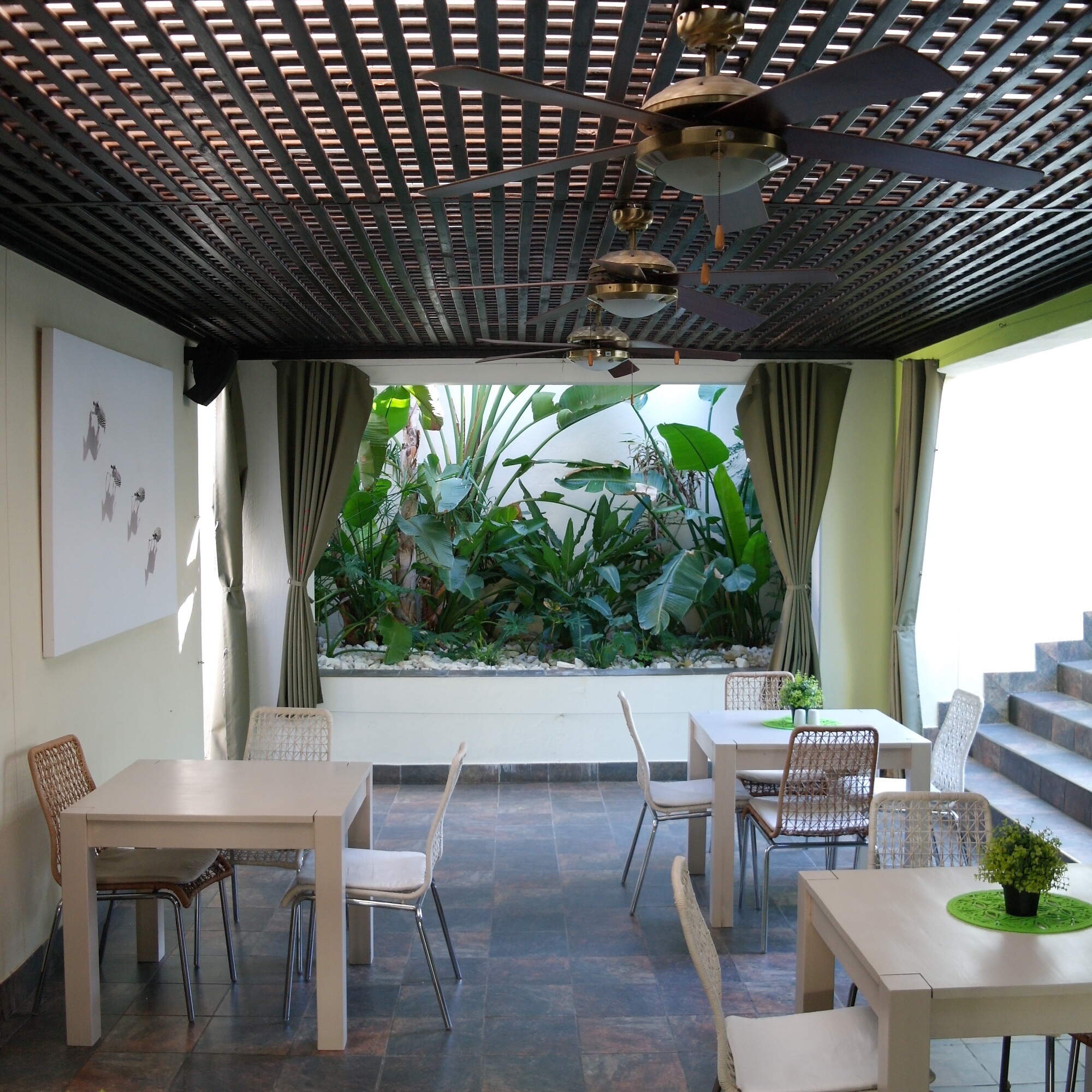 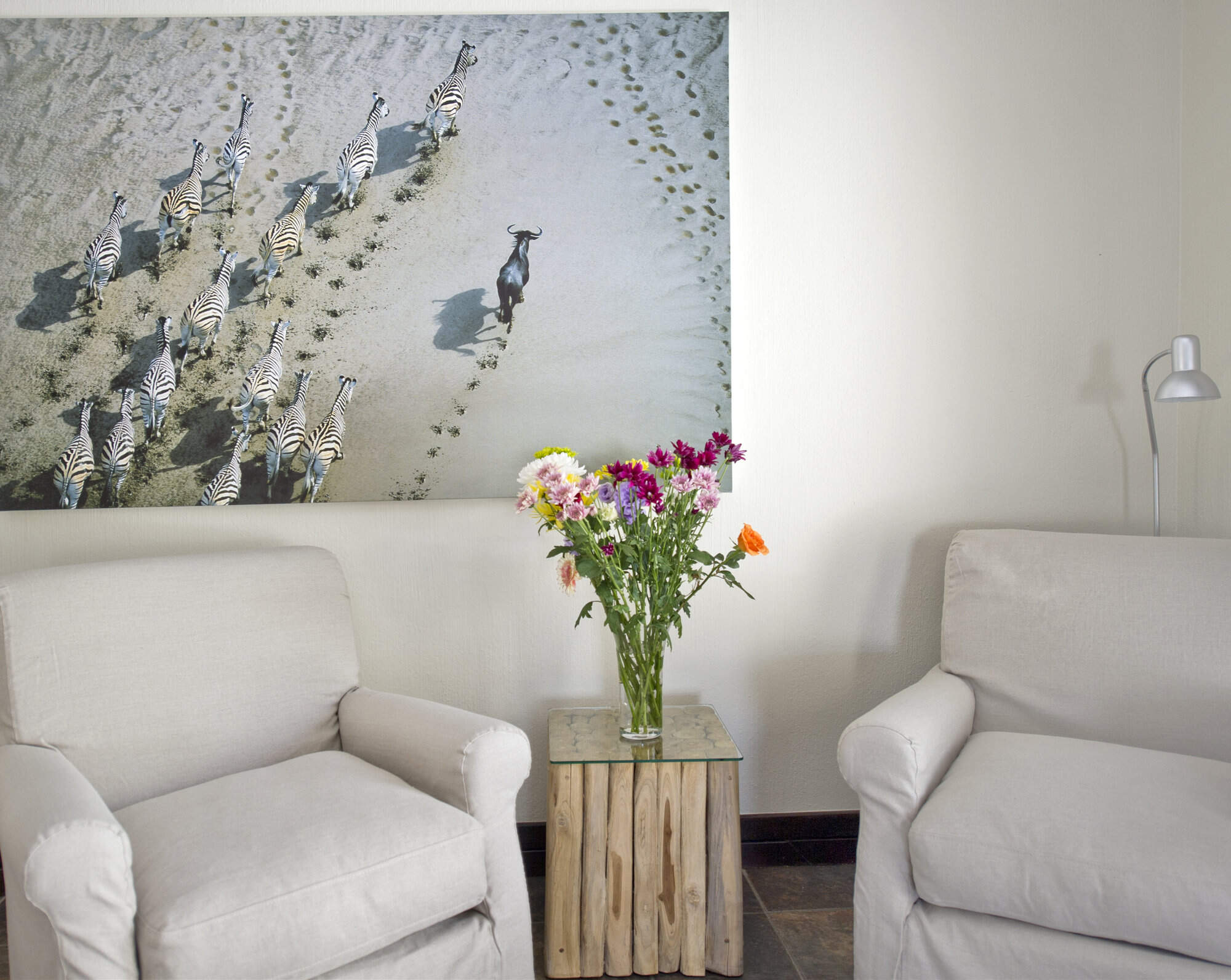 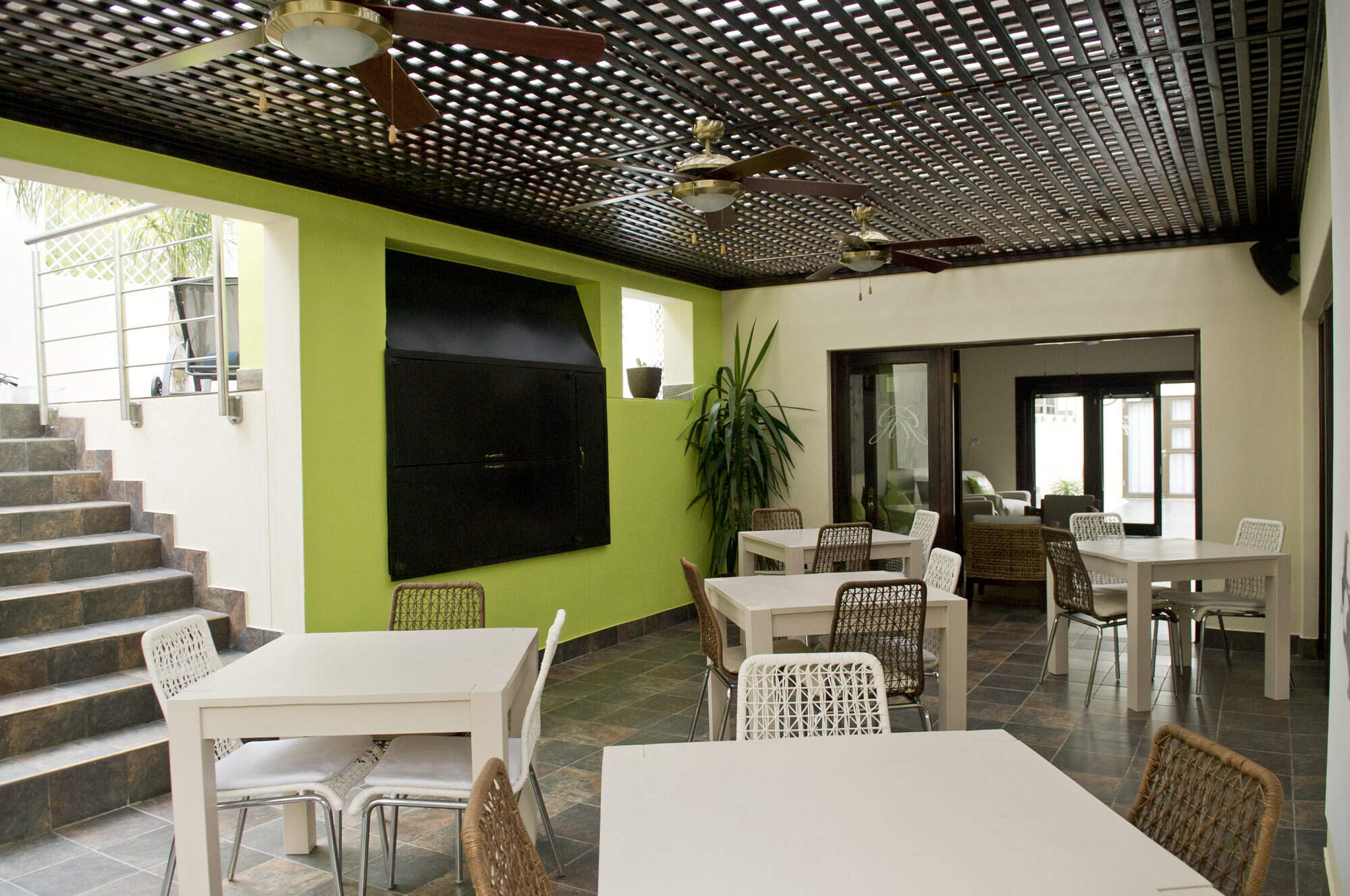 ... of Eros in 2011. Only ten minutes' drive from the city centre, it's a modern yet homely guesthouse with a backdrop of rolling hills. There's a mix of comfortable indoor and outdoor spaces in which to relax and the convenience of an in-house restaurant which caters for all meals.

From the outside Galton House blends in with its suburban neighbours. Entered through a remote-controlled gate is a cobbled parking area in front of a relatively plain façade. Wide steps lead into the main building where the smart cream interior and cool slate floors are brightened by feature walls, colourful accents and striking photographic artwork of Namibia. There's a foyer with curio shop and reception, opening out to a spacious lounge area. The décor is fresh and uncluttered with contemporary furnishings and a selection of coffee-table books. Off the lounge is an open-plan indoor dining room, which is open to residence for breakfast, lunch and dinner, here you also find a marble-topped kitchen space with a tea/coffee station.

Large glass doors provide plenty of natural light and lead out to a sheltered al-fresco dining space to one side, and a small courtyard with water feature on the other. Ceiling fans help keep these areas cool during summer.

Steps access the upper terrace where a small swimming pool, sunloungers and shade umbrellas provide a peaceful place to unwind. There's also a changing room and shower facility here, where guests may freshen up if they're arriving on an early-morning flight, or departing in the late afternoon.

The nine en-suite guest rooms at Galton House are located off the upper terrace, lower courtyard and parking area. They vary in size, with four double (king-size beds) rooms, three twins and two family rooms. All have air conditioning, satellite television, a desk, complimentary WiFi, telephone, hairdryer, safe and international power sockets, as well as an en-suite bathroom with shower. The décor matches the rest of the guesthouse with cream walls, photographic artwork and a different colour theme for each room.

The two family rooms are quite different. The larger of the two, also referred to as the pool suite, has one double bed and one single, perfect for a younger family. It is also the only room to have a bath. The second family room, which is perhaps better suited for a family with older children, is found off the parking area. It can be used as separate double and twin rooms, or the interleading door can be unlocked to turn it into a family unit.

We were impressed by the simple and friendly yet stylish ambience on our most recent visit to Galton House. Its location is within easy driving distance of the city centre, shops and restaurants, whilst also offering a secluded feel on the outskirts of suburbia. We'd recommend Galton House as a comfortable and well-run overnight stop in Windhoek before or after your Namibia safari.

Location
Windhoek, Namibia
Ideal length of stay
For pre- or post-safari accommodation in Windhoek, we’d recommend one night at Galton House.
Directions
Galton House is located about ten minutes’ drive from the city centre, 20 minutes from the domestic Eros Airport or 45 minutes from Windhoek International Airport.
Accessible by
Self-drive or Fly-and-Transfer

Breakfast is combines a continental buffet with a variety of cooked options made to order.

An à la carte lunch is offered on request and the set dinner menu is updated daily.

Attitude towards children
Children of all ages are welcome at Galton House.
Property’s age restrictions
There are no age restrictions here.
Special activities & services
None
Equipment
Galton House has two en-suite family rooms. One sleeps a family of four with twin beds, two single beds; the other sleeps a family of three with a twin/double and one single bed. A cot, highchair and baby bath can be provided on request.
Generally recommended for children
Yes, Galton House is well equipped for children and has two family rooms.
Notes
Children should be under parental supervision at all times, especially by the pool.

Power supply notes
There are international power sockets in all the rooms.
Communications
There is a central telephone (landline) and excellent cellphone coverage. Complimentary WiFi is available in the main area and in the guest rooms – a voucher with an internet access number is available from reception.
TV & radio
There’s a satellite television in each room.
Water supply
Mains
Water supply notes
The showers are plumbed, the toilets are flush and there is plenty of hot water.

Malarial protection recommended
No
Medical care
The guesthouse manager is trained in first aid and a comprehensive first-aid kit is kept on site. Good medical centres and hospitals are located very close by.
Dangerous animals
Low Risk
Security measures
Galton House is fenced with secure off-street parking and a remote-controlled entrance gate. A security guard is on site during the hours of darkness.
Fire safety
Fire extinguishers are kept in the common areas of the guesthouse.

Disabled access
On Request
Laundry facilities
A laundry service is available at extra cost, with items returned within 24 hours.
Money
There’s a safe provided in each room.
Accepted payment on location
Payments may be made by credit card (MasterCard, Visa, Diners and American Express) and in cash (Namibian dollars and South African rand).