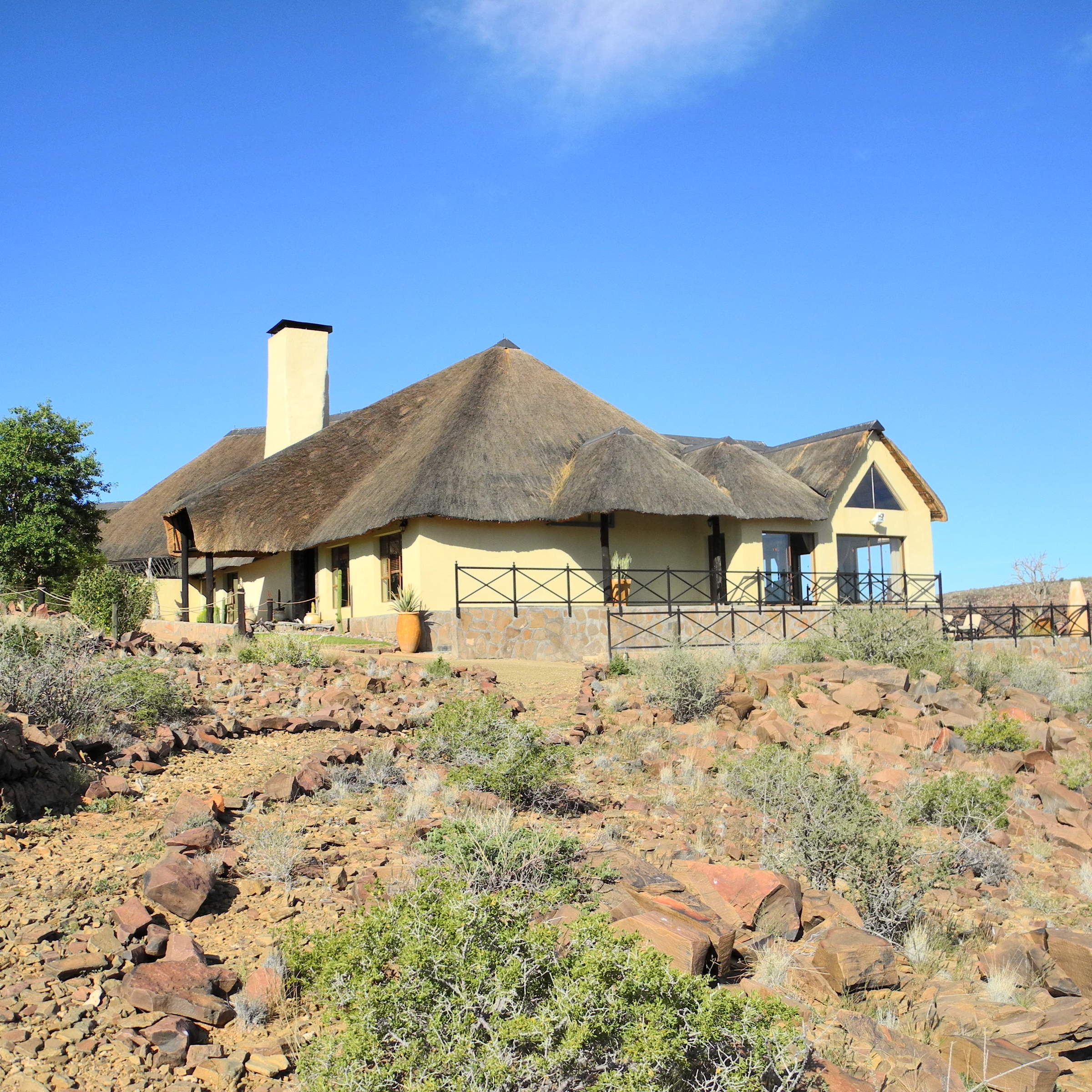 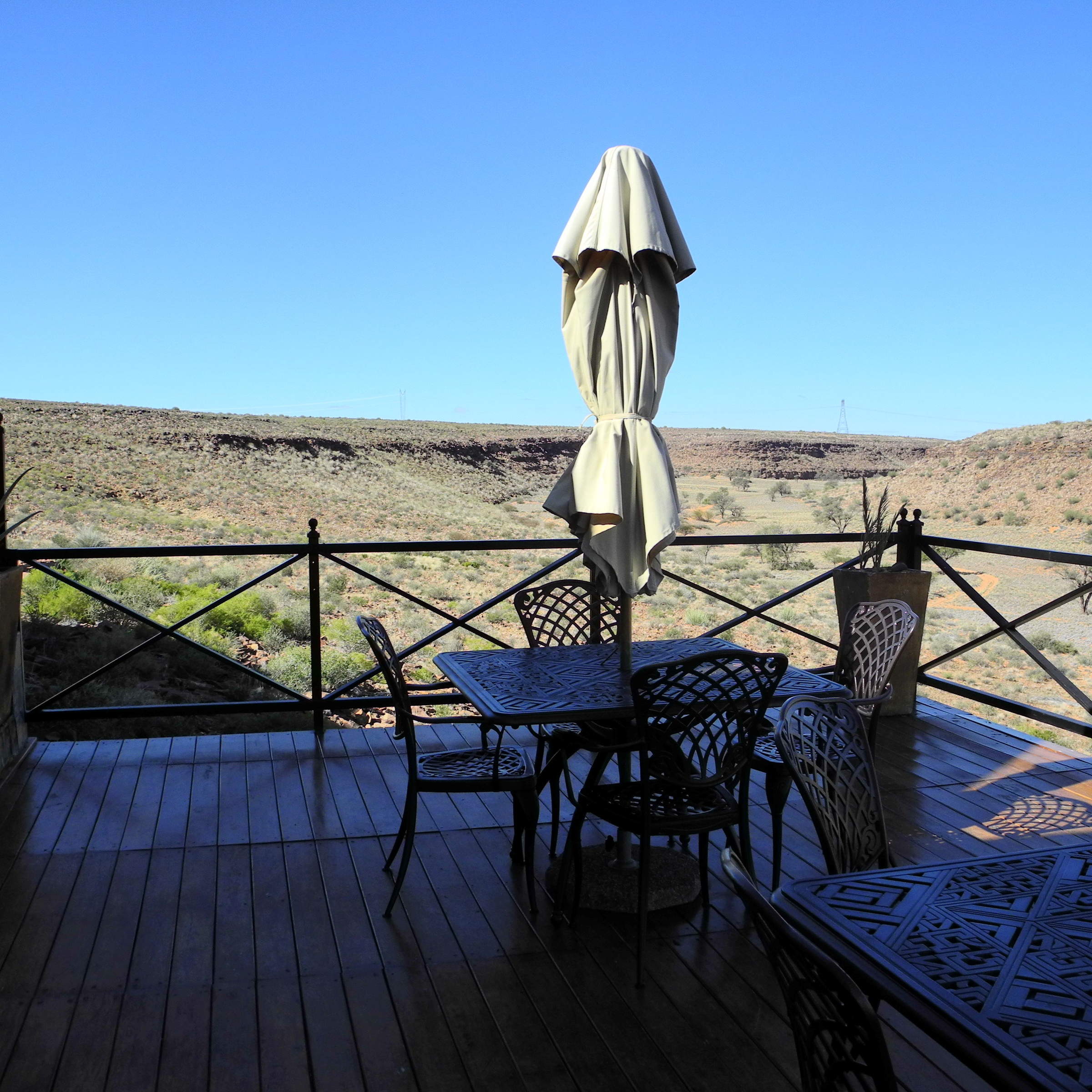 6 independent comments and wildlife information from our travellers who have visited Vogelstrausskluft Lodge and kindly agreed to share their thoughts. They do not necessarily represent the views of Expert Africa

3 nights Arrived 6 Oct 2010
"A warm and personal welcome by the delightful Dolores set the tone of the stay.

Beautifully designed suite and attractive public areas with very accommodating staff made for an enjoyable few days. A major let down was the problem with the hot water supply in our room which meant that it was intermittent and never sufficient to even have a few inches of water in the bath. The bath facility had been the main reason we had booked the suite rather than a standard room so it was a particular shame when not only could we not use this properly but the shower was cold as well and we had to resort to boiling kettles!

We told Dolores about the problem on our first full day having wondered if it was just the time of day we were using the water that was the problem. She took the matter seriously but when the maintenace man came to check it, it was running ok so nothing more was done despite us explaining it was 'on and off'. When it persisted it was looked into again and a blockage was confirmed but not in time to remedy it for the remainder of our stay so it was a bit unfortunate.

Plumbing problems are one of those things but it was a shame that a 3 night stay was affected in this way and that we could not fully use the bathroom facility as intended.To her credit Dolores took the problem on board and recognised it had been a disappointment for us.

The full day trip into the canyon was enjoyable though the journey time to get there and back relative to the time spent there was unexpectedly long and information about what the day would or could involve was not fully explained. We would have welcomed more communicative 'guiding' generally and felt frustrated that with hindsight we could have had longer in the canyon had we known that an optional diversion to a viewpoint on the return could have been shaved off.

We liked the walk along the dry riverbed beneath the lodge and also walking along the access road as a brisker option!
The cooked breakfasts were very good and a request for raw oats and sultanas in the absence of any muesli option was willingly obliged and resulted in a bowl of granola being provided the next day in response.

1 night Arrived 11 Sep 2009
"This lodge sticks in our minds for all the wrong reasons. When we arrived we were asked about dietary requirements as they pride themselves on their food and their 5 course dinners. I stated that I had to avoid dairy produce but could easily eat my way around most menus so it wasn't a real problem. In the middle of our welcome a bus tour turned up so they took priority, and then the owner turned up in a terrible flap from a shopping trip, having left the shopping in the shop. She apologised for her stressed state on 5 separate occasions which became somewhat irritating in itself.

The rooms in the lodge were bog standard, hotel type, and the views were very average. We elected to go on the sundowner drive to the edge of the canyon - 18 kilometres of extremely bumpy track to reach the canyon, which was not particularly interesting. Fortunately it was the beginning of our trip so expectations were not too high. The drivers were not particularly chatty, and neither were any of the other guests. who had arrived in a tour bus - however their tour guide was very chatty and informative which was a bonus.

The evening meal was a joke. When I didn't eat the 'amuse bouche' because it was covered in a cream sauce, there was concern and then I explained about the dairy problem - again - and then the kitchen went into panic trying to produce a different meal and blaming me for not telling them. In the end, we waited a further half an hour, and finally got some smoked salmon without cream souce, but the main course was covered in cheese, and puidding was a chopped up strawberry. I felt embarrased and was very pleased to leave the next morning." See all these reviews: 17n in Namibia
Experience Report
Overall Rating:
Poor
Location:
Average
Service:
Average
Activities:
Average
Rooms:
Average
Food:
Average
Facilities:
Average
Ms J x 2
Birmingham

2 nights Arrived 2 May 2009
"The drive down into Fish River Canyon is spectacular - and is followed by a great walk in the Canyon & a superb 'braii' picnic.

3 nights Arrived 25 Oct 2008
"Comfortable rooms and excellent food. At times we felt that the lodge was not as professional as it should have been and they really need to either provide torches for the rooms or ensure the limited external lighting is used. Our first night there and on the last the external lighting was all out of use and we had to rely on our own torch, fortunately we always take one with us.

However this is a relaxing place to stay on the unfashionable North side of Fish River Canyon (which can be reached from the lodge) and is in a very peaceful location." See all these reviews: 14n in South Africa; 12n in Namibia
Experience Report
Overall Rating:
Good
Location:
Good
Service:
Average
Activities:
Average
Rooms:
Good
Food:
Good
Facilities:
Average
Mr G
Torquay

Hard to comment on activities as there was a problem with our booking of the one-day excursion." See all these reviews: 10n in Namibia; 7n in South Africa
Experience Report
Overall Rating:
Good
Location:
Good
Service:
Excellent
Rooms:
Good
Food:
Excellent
Feedback Response
These travellers requested a full-day excursion to the Fish River Canyon. We booked this; it was confirmed to us; but the reservation never reached the people actually running the excursion. Despite this misunderstanding, the excursions would have run, however, it was cancelled due to bad weather (and subsequent dangerous road conditions into the canyon).