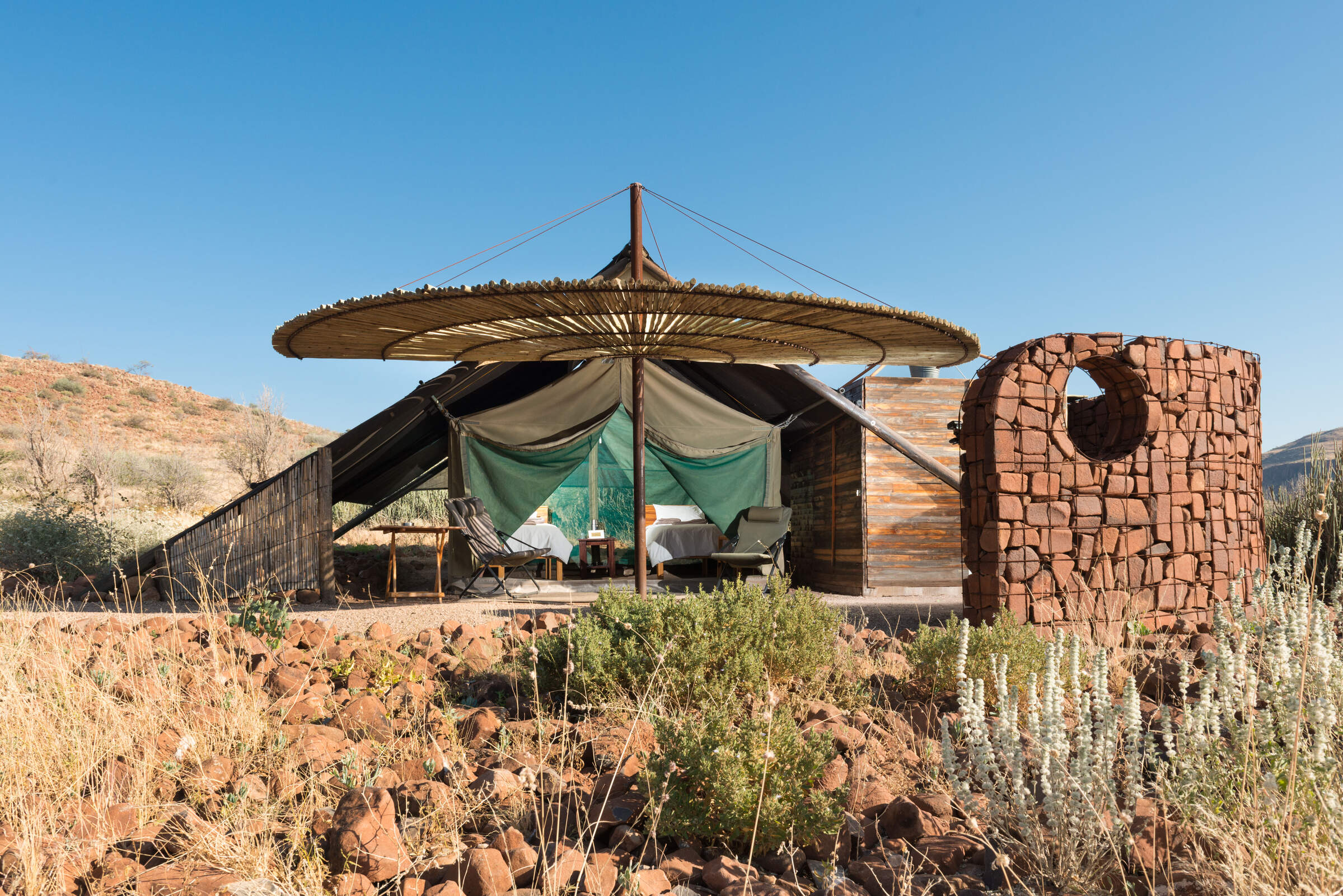 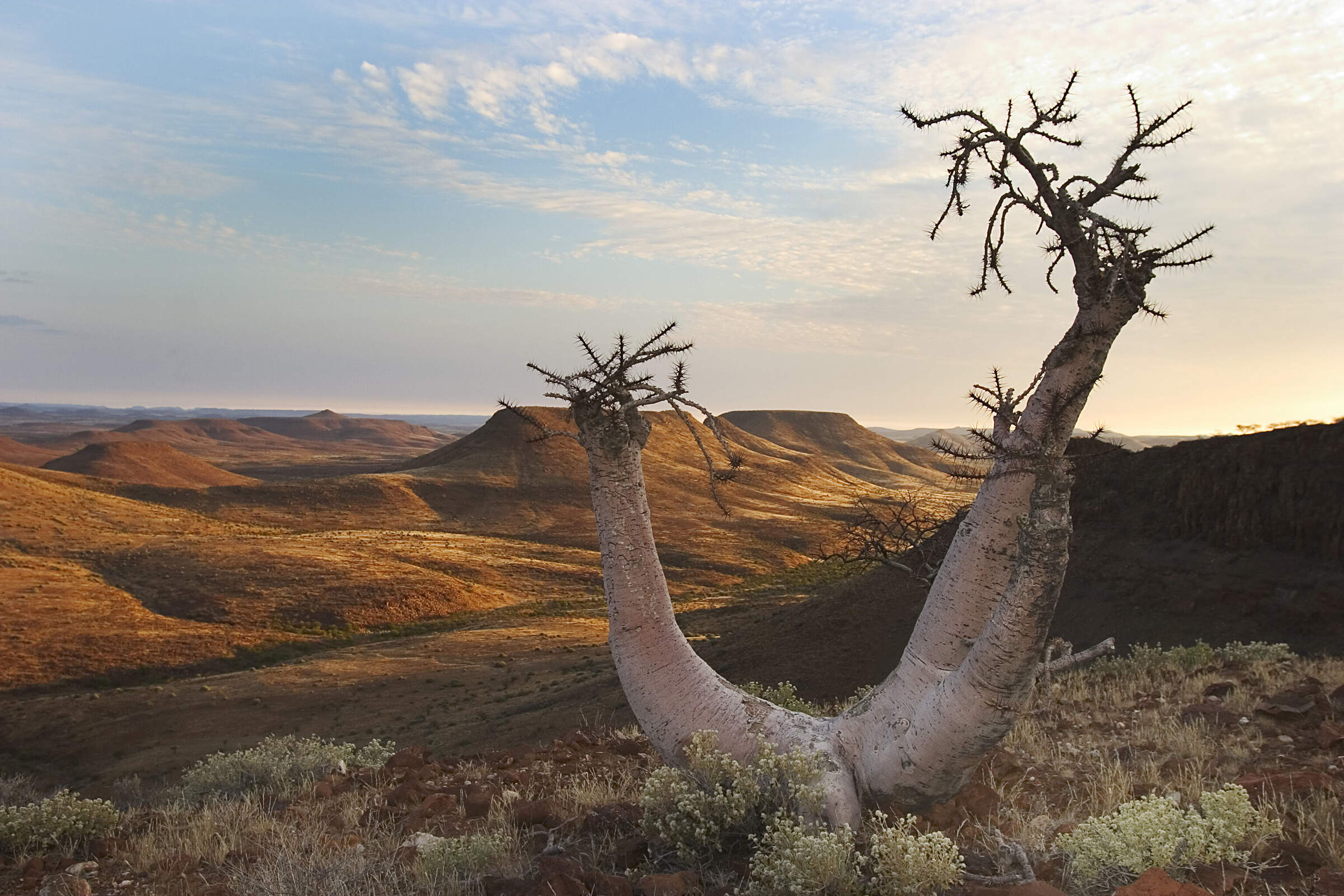 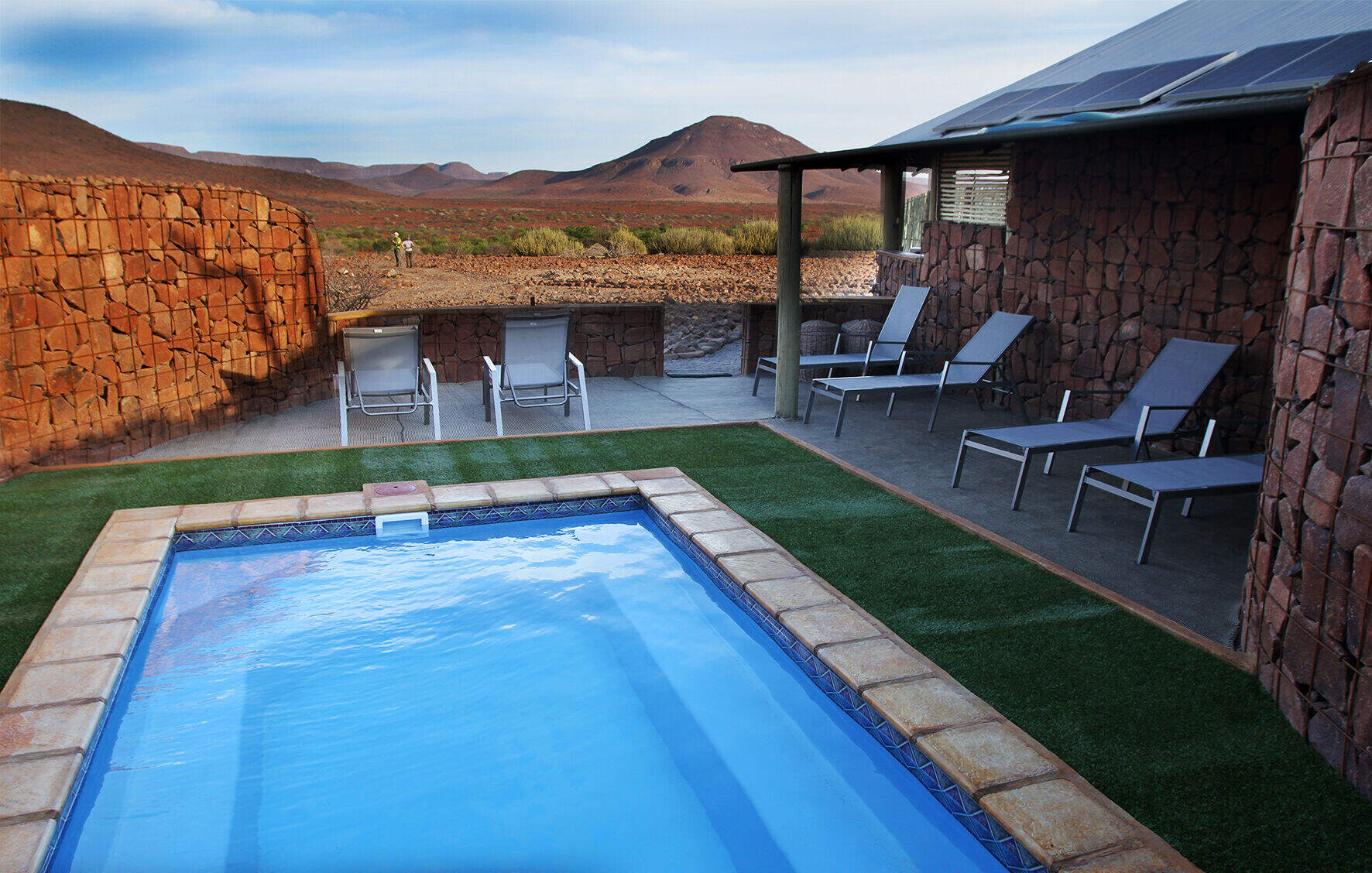 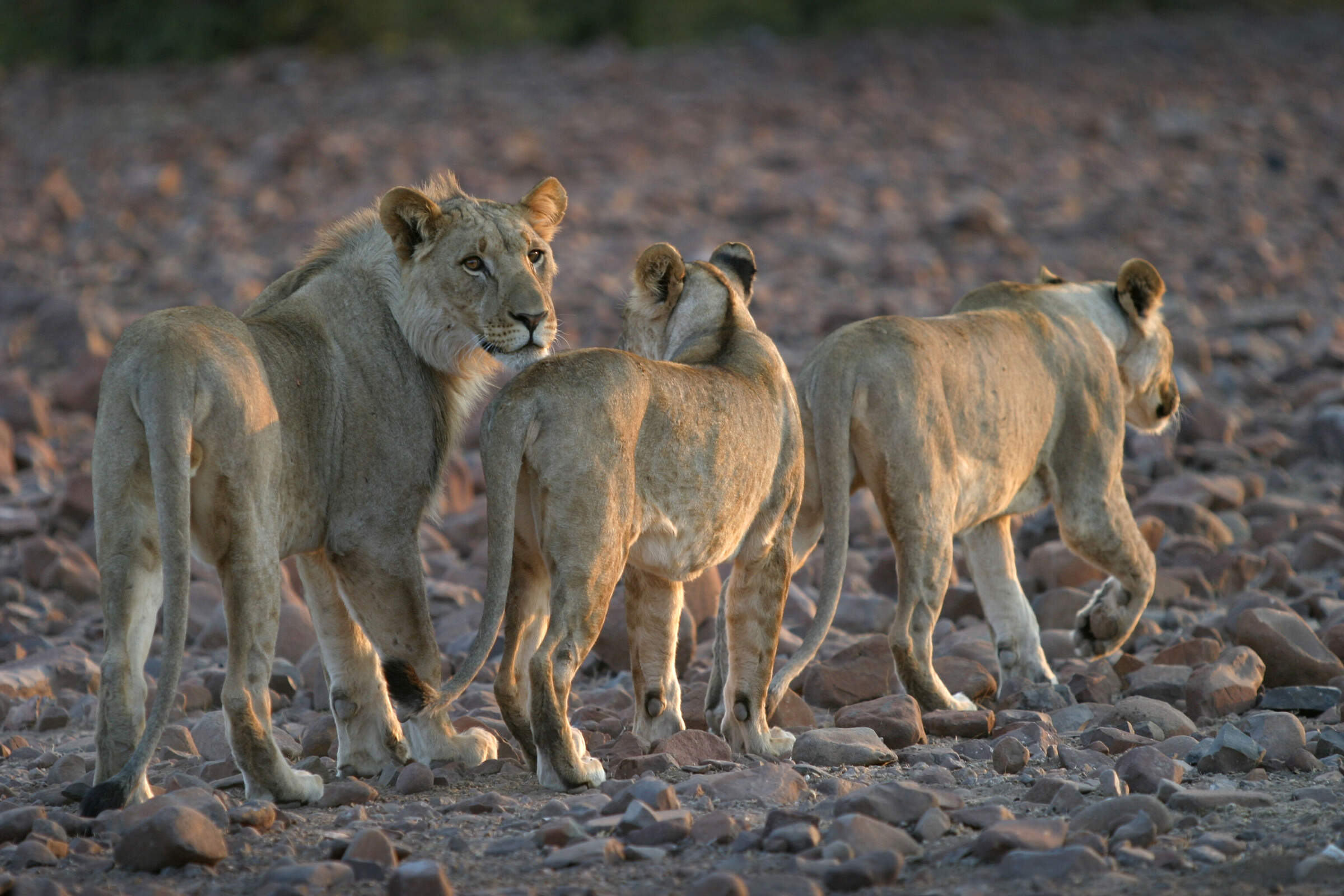 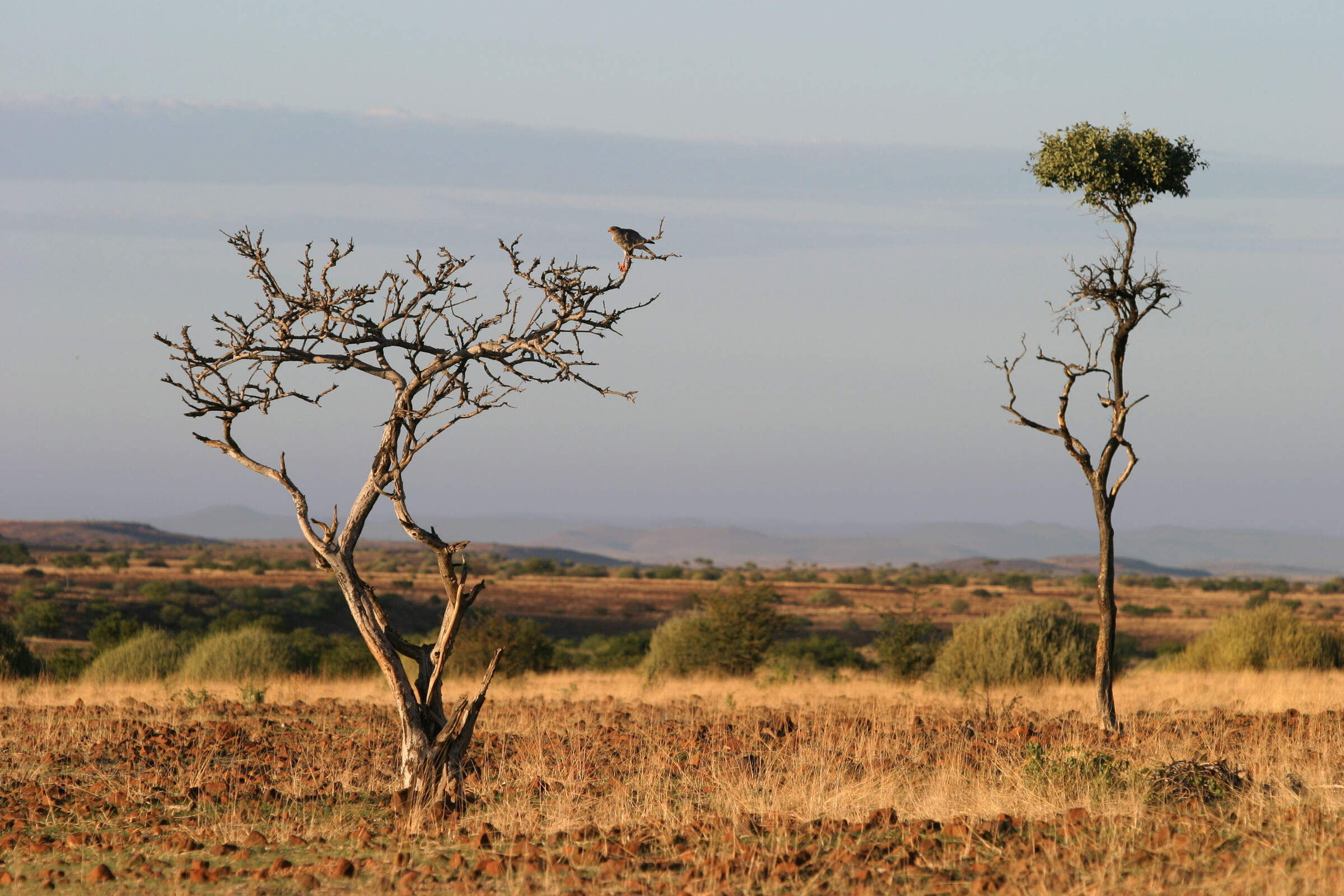 110 independent comments and wildlife information from our travellers who have visited Etendeka Camp and kindly agreed to share their thoughts. They do not necessarily represent the views of Expert Africa

2 nights Arrived 16 Nov 2016
"We felt very looked after here, Dennis is a very attentive and a more than helpful host who makes you feel like one big family round the dining table in the evening. Very relaxed, but very well run.

The food is very good and included roast dinners, apple crumbles and lots of vegetables. The tents are very comfortable and it was nice to have a quick swim at the end of the day. The guides on walking activities and also the game drives are brilliant. They are so knowledgable and really wanted to impart what they knew as well as having eyes like a hawk to spot wildlife from miles away!

Some great drives around the conservancy, plus you get to have a game drive on the way up from and then back to your car.

2 nights Arrived 25 Oct 2016
"Our absolute favourite place - we loved everything about this camp - from the guides, the food, the communal eating, the tents, the outside bucket showers, the walk up the hill behind for sundowners.

Dennis (the host) has been doing this for 25 years, but he is a fantastic host and makes the experience fresh for everyone. He was especially good with our children aged 12 and 10. We all particularly loved the star gazing session. The guides are excellent and knowledgable too.

There is a surprisingly large amount of game too! They have got Afrikat to tag a male lion and when we were there we saw him with 2 females and 4 (of 7) cubs. We also saw desert elephants." See all these reviews: 8n in Namibia
Experience Report
Overall Rating:
Excellent
Location:
Excellent
Service:
Excellent
Activities:
Excellent
Rooms:
Excellent
Food:
Excellent
Facilities:
Excellent
Bruce
Harrogate

2 nights Arrived 12 Oct 2016
"Amazing place and really remote. Saw lots of game in spite of the rugged scenery including a very close encounter with lions!

Dennis our host was gracious and laid back, and Bonny and the other guides (Bonny and Boas) made this one of our star place to stay for us.

Daytime bush walk was not really much of a walk and perhaps could be shorter or faster and further! Game drives remarkable.

2 nights Arrived 14 Aug 2016
"This was another very successful stay, in this beautifully located lodge; we enjoyed the early morning walk and the afternoon's scenic drive, and appreciated our guide's knowledge of plants and trees as well as of the wildlife.

The communal meals and generously offered drinks were all much appreciated and we benefited too from our hosts' conversation and knowledge of the area." See all these reviews: 16n in Namibia; 3n in South Africa
Experience Report
Overall Rating:
Excellent
Location:
Excellent
Service:
Good
Activities:
Excellent
Rooms:
Good
Food:
Good
Ms C
London

2 nights Arrived 26 Jul 2016
"The drive to Etendeka was a game drive in itself which was lovely.

After Damaraland, it was a lot less friendly and a bit rustic and although the latter had its charm, we quickly realised we preferred a bit more comfort!

Some of the activities were affected by those who we were placed with- and while this is not the fault of the camp who have no control over the manner and behaviour of guests, unfortunately it does affect our judgement. We could not wait to leave largely to get away from one particular family with whom we had had to share all our activities. As a couple rather than a family we always tended to get placed where there was space. Generally this was not a problem at all, far from it, and we met some great people, but on this occasion it was very tiresome.

Food was not great, and certainly the vegetarian options were very limited.

The star gazing was an added bonus and we enjoyed the walk very much.

On reflection, we felt that we should not have gone to both Damaraland and Etendeka as there were considerable similarities in what we saw/did and we would have preferred to have had more time in the area closer to Damaraland or been able to see more of Twyfelfontein or the Skeleton Coast." See all these reviews: 15n in Namibia; 9n in Botswana; 2n in Zambia
Experience Report
Overall Rating:
Average
Location:
Excellent
Service:
Average
Activities:
Excellent
Rooms:
Average
Food:
Average
Facilities:
Good
Mr J & son
UK

3 nights Arrived 11 Jun 2016
"Etendeka is a very special place - it is set in a remote, semi-desert, mountainous area. Dennis, the host and Bonnie, the main guide were the most knowledgeable (about wildlife and Namibian conservation) people we met on our trip.

Unlike other safari camps, where early morning and late afternoon drives seem to be the norm, here there is a 3-4 hour morning walk. You see less ‘big’ game but a lot more of the smaller, more intimate stuff - birds, vegetation, tracks etc. and there is much more time for explanations and discussion. Our 2nd morning walk with Bonnie was one of the highlights of our whole trip - the high plateau, ‘crystal’ walk with views you can only dream of. Here we saw the elusive klipspringer.

We saw less here on afternoon drives than elsewhere and none of the ‘big 5’ (although a lion was outside a fellow traveller’s tent during the night and there was evidence of rhino droppings) but we did see something Dennis said he had only seen 3 times in 25 years - a desert adapted tortoise.

The food was the best of anywhere, again we loved the communal dining and Dennis was a great host with his explanations, stories and night sky telescope (I’d never seen Saturn’s rings or the detail of the moon before).

To explain the two only ‘good’ ratings below:

Rooms: we loved the simple tents and bucket shower but it would be misleading to give them an excellent rating.
Facilities: this is a simpler, less luxurious camp than some others (but we liked it for that). If I had to force myself to gripe it would be that the small pool was covered over. I had a fleeting fancy to sit with my feet in it one hot early afternoon. I’m sure Dennis or Bonnie would have uncovered it if I had asked but they weren’t around and I was too lazy to pursue it." See all these reviews: 11n in Namibia
Experience Report
Overall Rating:
Excellent
Location:
Excellent
Service:
Excellent
Activities:
Excellent
Rooms:
Good
Food:
Excellent
Facilities:
Good
Ms M & Mr N
New York

"A unique and memorable stop"

2 nights Arrived 13 Apr 2016
"We thoroughly enjoyed Etendeka and its unique style. It was just wonderful to be so isolated amidst such beautiful surroundings.

The tents were terrific and Dennis and Bonny were extremely attentive to our needs and comfort -- this was especially so while my husband was suffering pretty severe consequences during the first day from something he had eaten (elsewhere!). He quickly recuperated and was able to fully enjoy the rest of the stay. As stated the accommodations and meals are simple in one sense but they are also high quality. Food was delicious and the communal ambience - and evening conversations - were lovely. Great walks and rides in the surrounding areas.

it was quit impressive to see what it's taken to both preserve this land and to address the practical needs of making it livable and sustainable." See all these reviews: 12n in Namibia
Experience Report
Overall Rating:
Excellent
Location:
Excellent
Service:
Excellent
Activities:
Excellent
Rooms:
Excellent
Food:
Excellent
Facilities:
Excellent
Mr PC
SE London

2 nights Arrived 23 Feb 2016
"This was the most remote location we stayed in. We were picked up at Palmwag Lodge by the guide Bonnie in a 4WD for what turned out to be an 18km game drive to the camp.This is a tented lodge with bucket showers but the tents are very well appointed,

It is all-inclusive with food served buffet-style and was good. The owner who opened the camp over 25 years ago was around at meal times but did not conduct any guiding when we were there. However he was very informative about the area and with his telescope showed us the fabulous night sky.

2 nights Arrived 29 Sep 2015
"The two of us have mixed views. I loved it, my wife was a little less enthusiastic.

Location out of this world. Superb.

Chef needs changing - or 'drying out'