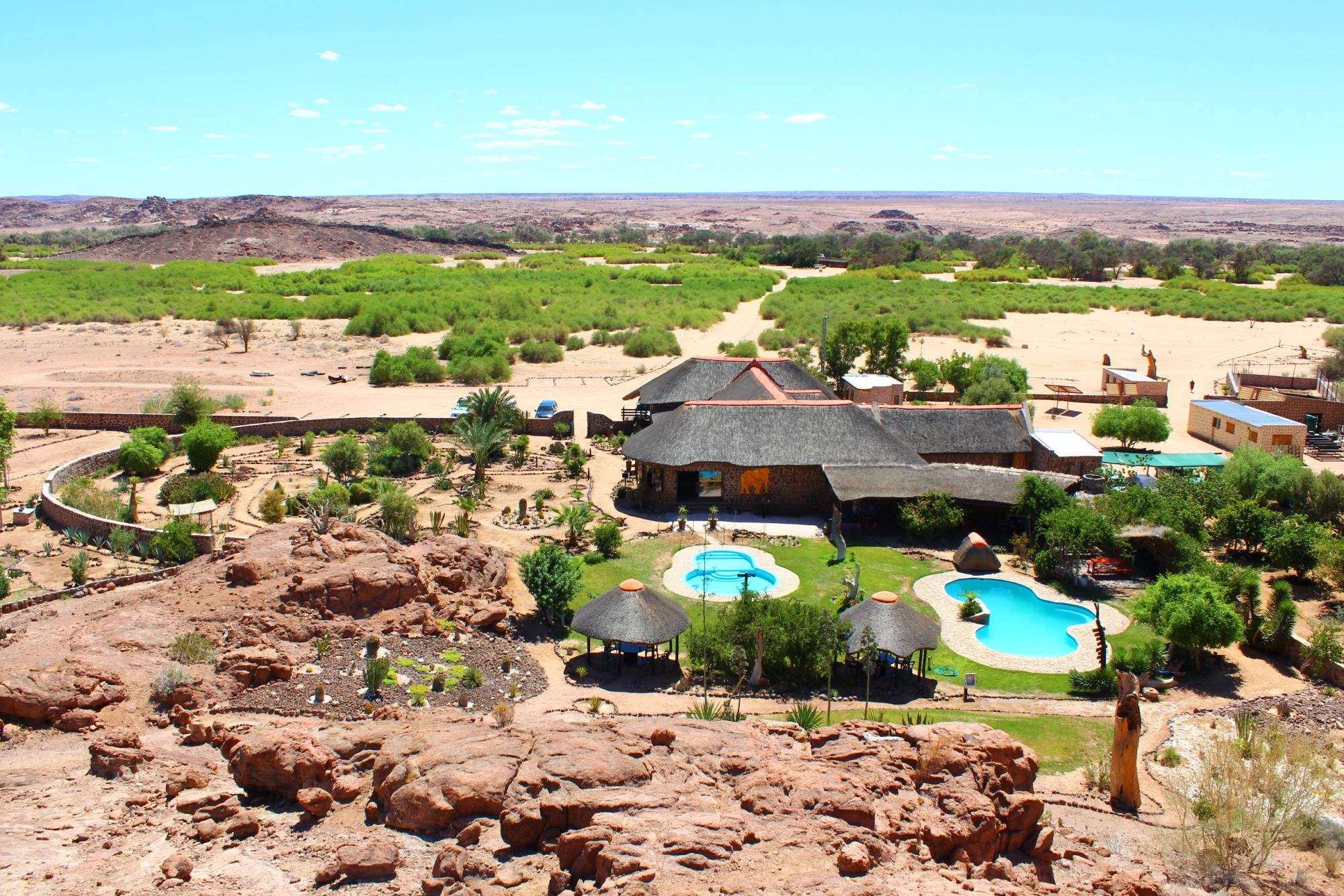 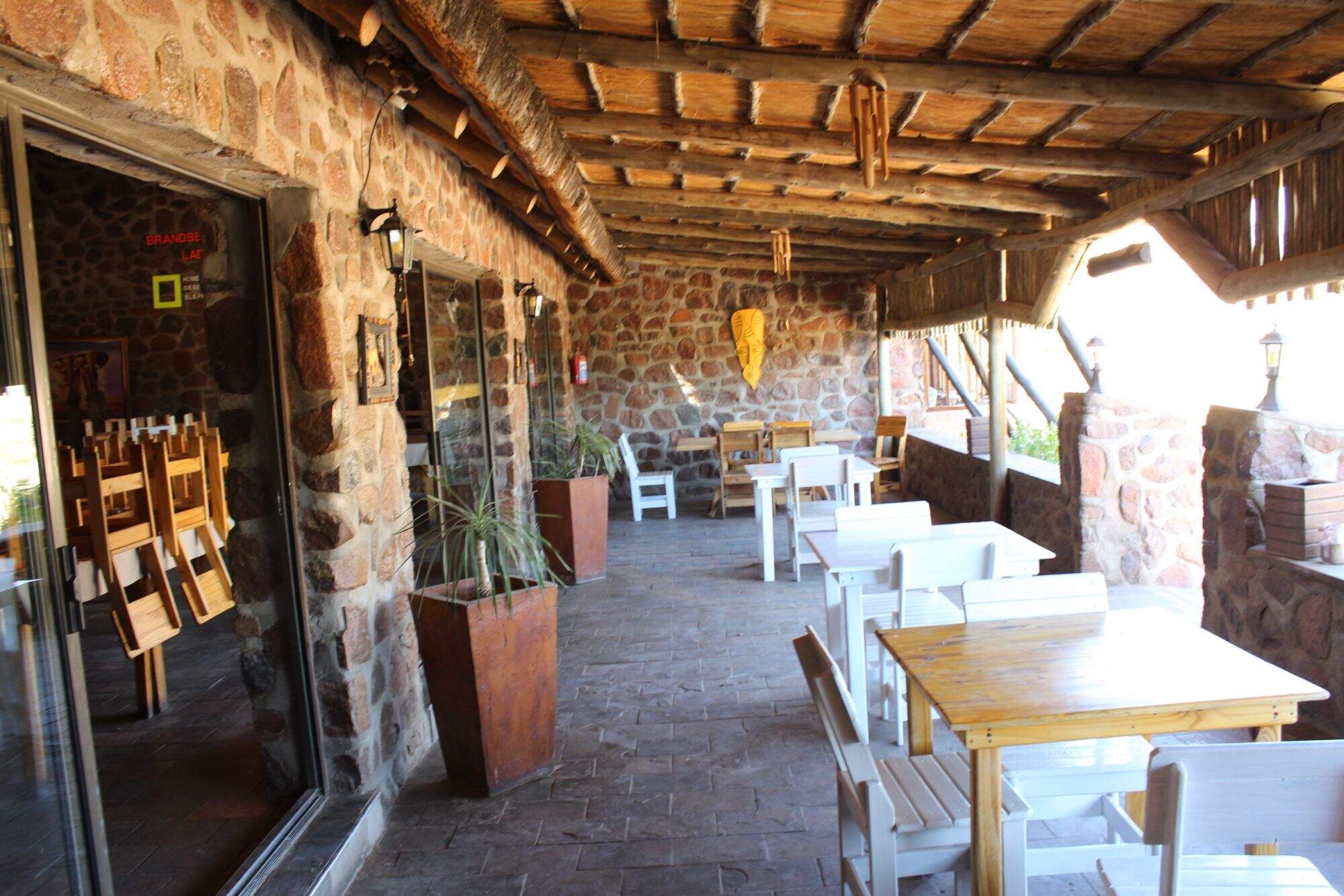 23 independent comments and wildlife information from our travellers who have visited Brandberg White Lady and kindly agreed to share their thoughts. They do not necessarily represent the views of Expert Africa

1 night Arrived 14 Apr 2011
"The staff here were very helpful, Magda sorted out a problem we had, arranging replacement wheels for our spares which had been stolen along the way.

We were disappointed with the rooms, extremely hot, fans only in some rooms and those that were there only operate when the generator starts up in the evening. The pool was not clean, rooms very tired and in need of repair. Shower temperature dependant on wood burner and didn't seem very adjustable.

"Wonderful lodge in the shadow of namibias Hi"

2 nights Arrived 14 Feb 2011
"This was a good fun place to stay.Despite the fact thatwe were grounded for the day there because of a puncture there was plenty to do . We were able to find shady walks, there were 2 big pools set in the most beautiful gardens .
On one evening the workers at the lodge did a lovely concert ,they have their own choir.
The workshop at the lodge were ale to repair the puncture very reasonably.
The brick built chalets had hot water provided by individual woodburning stoves lit for us early in the morning.
Every morning a flask of boiling water was delivered to the chalet for early morning tea.
They had a meer cat pet on the premises which was cute.
had we been able to get there ,there was a famouswall painting The white lady Very close by and the splendours of the Brandburg Mountain." See all these reviews: 14n in Namibia
Experience Report
Overall Rating:
Excellent
Location:
Excellent
Service:
Excellent
Activities:
Excellent
Rooms:
Excellent
Food:
Excellent
Facilities:
Excellent
Mr & Mrs M
Leeds

"Lost in the sands of time"

1 night Arrived 5 Nov 2010
"I know that this was a lodge that I fancied as a stopover to break up the trip to Palmwag. With hindsight I think I would have pushed on a bit further, given that the lodge was, I believe, some 27kms from the main road.

The cabin was basic - no glass in some of the windows for example. This was not a problem until the wind got up and allowed loads of sand into the room.

In addition, the cabins were some distance from the main lodge and quite spaced out in what appeared to be no logical pattern. As a result, when returning to the cabin after the evening meal, we very quickly got lost in the dark and ended up stuck in some soft sand. Fotunately some people in 4x4's were camping out nearby and came to our rescue.

Mealtime was chaos - there seemed to be insufficient tables etc for all the guests and as there was a coach party staying who wanted to sit with certain friends, it ended up like a game of musical chairs. The service was patchy - the staff seemed more interested in supplying alcohol than in getting the food from the kitchen. As a result, those of us that were furthest way from the kitchen had to wait a long time as staff were diverted to go and fetch drink orders that they received whilst serving diners." See all these reviews: 16n in Namibia
Experience Report
Overall Rating:
Average
Location:
Average
Service:
Average
Facilities:
Average
Rooms:
Average
Food:
Good
Mr & Mrs G & W
Surrey

1 night Arrived 23 Sep 2010
"The Goodwins and Wilsons had different opinions on Brandberg. The Goodwins liked it and the Wilsons thought it was poor.

We did the Game Drive but unfortunately landed up with a tour party on the vehicle which was not very satisfactory. Although Desert Elephants had been seen in the camp on that day and all week and we had a 90% chance of seeing them, this was not to be. The Cabaret by the local people after the Evening Meal was excellent and the gardens to the place were lovely.

The Goodwins loved the tents and open showers but have to say that there should be better directions to getting to this accommodation since at one time we found ourselves on the Game Drive Road and nearly sank in the sand! The bed linen needs replacing since this is very tired.

Staff did not seem to be managed in any way and there was no organisation as such. Dinner was ok but only one person seemed to serve many guests....a bit like a school dining hall. We left before dessert as there was little atmosphere and had a drink back at our chalets.

1 night Arrived 22 Aug 2010
"Our impression of this lodge was that it was quite impersonal and seemed under staffed, this could be down to lack of organisation on a management level.

Glad we only stayed for one night.

1 night Arrived 11 May 2010
"We used this lodge as a stopover to break up a long drive. As such it met that need. Room was basic, although the welcome was warm and friendly, and the location positively stunning.

It was some way off the main road however, and the access road was heavily ''washboarded''. We very much enjoyed meeting Kingsley and Stumpy (two young Meerkats), they were good company at breakfast." See all these reviews: 14n in Namibia
Experience Report
Overall Rating:
Average
Location:
Good
Service:
Good
Facilities:
Good
Rooms:
Average
Food:
Average
Mr & Mrs W
Warwick

"Missed the elephants by an hour...."

The possiblity of bumping into elephants gives an added frisson to the stroll to the main restaurant and the morning delivery of hot water for tea/coffee is welcome and charming touch. Service in the restaurant tends to be slow and the fixed menus are simple but adequate. The bar seems to be a local gathering place and the beer and the pool are cool and good after a long drive to get here.

1 night Arrived 17 Sep 2009
"We picked this lodge simply to break the drive from Damaraland to Swakopmund and so for a one night stop it was fine. It was basic but clean, everyone was very friendly and very helpful when we needed some help with our car.

The lights in our chalet which were battery fed were temperamental but we did not worry too much as we went straight to bed after dinner (early nights were becoming the norm!)" See all these reviews: 17n in Namibia
Experience Report
Overall Rating:
Good
Location:
Good
Service:
Good
Facilities:
Good
Rooms:
Average
Food:
Good
Showing 11-20 of 23
123
Previous Next
70%
23 reviews of Brandberg White Lady by travellers since August 2007
Overall rating by our travellers
2
10
8
3
0
Filter by month