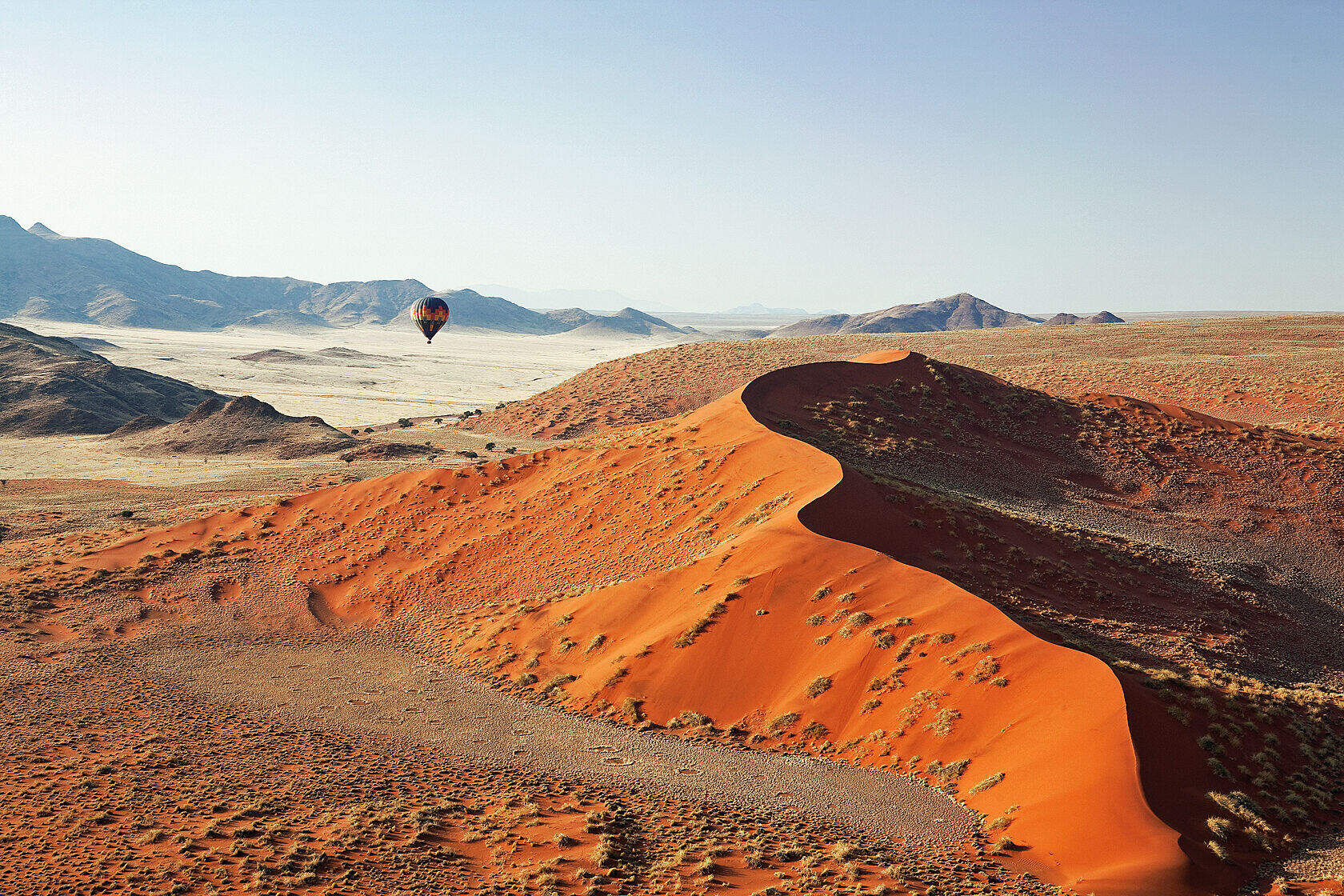 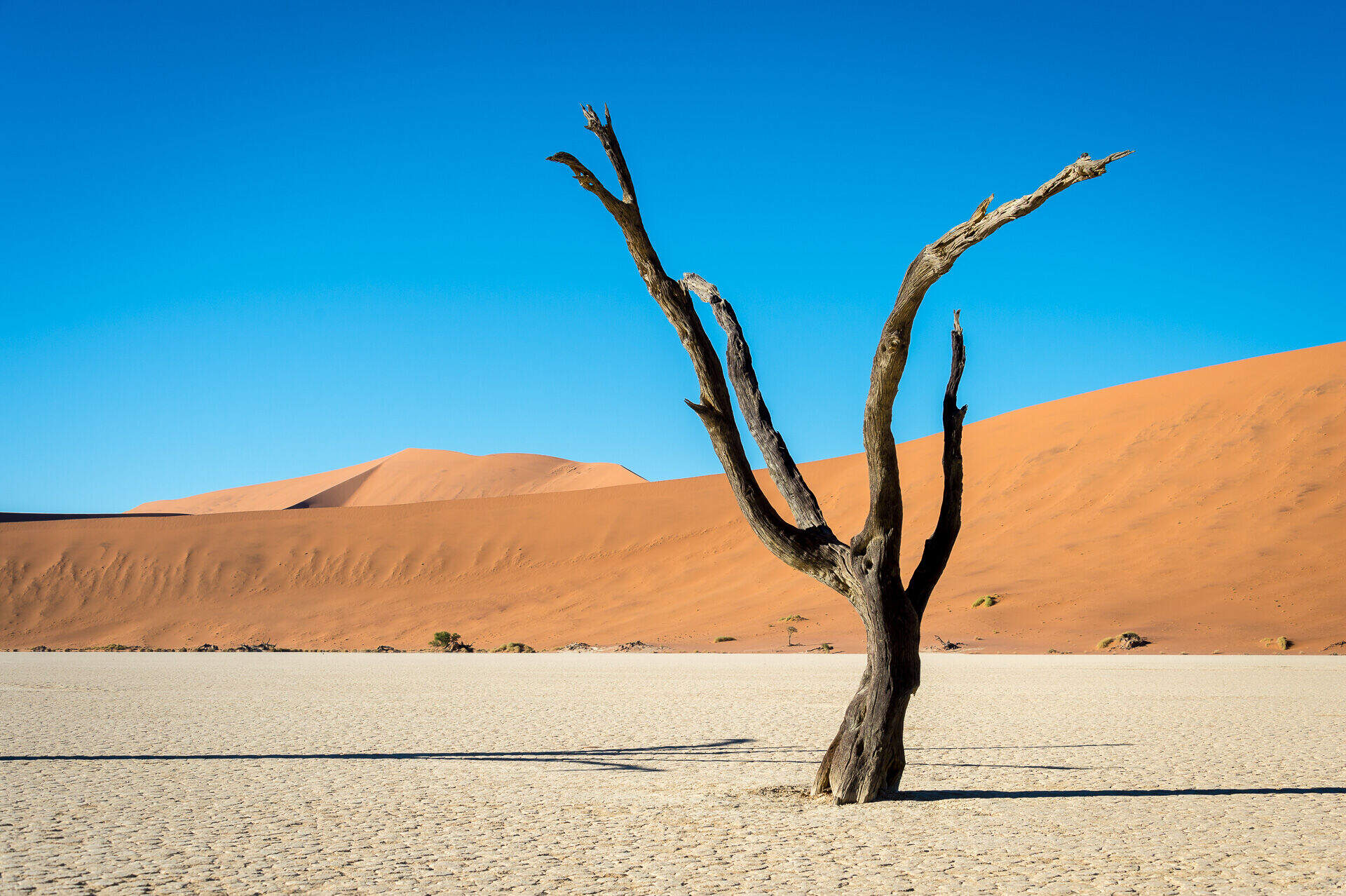 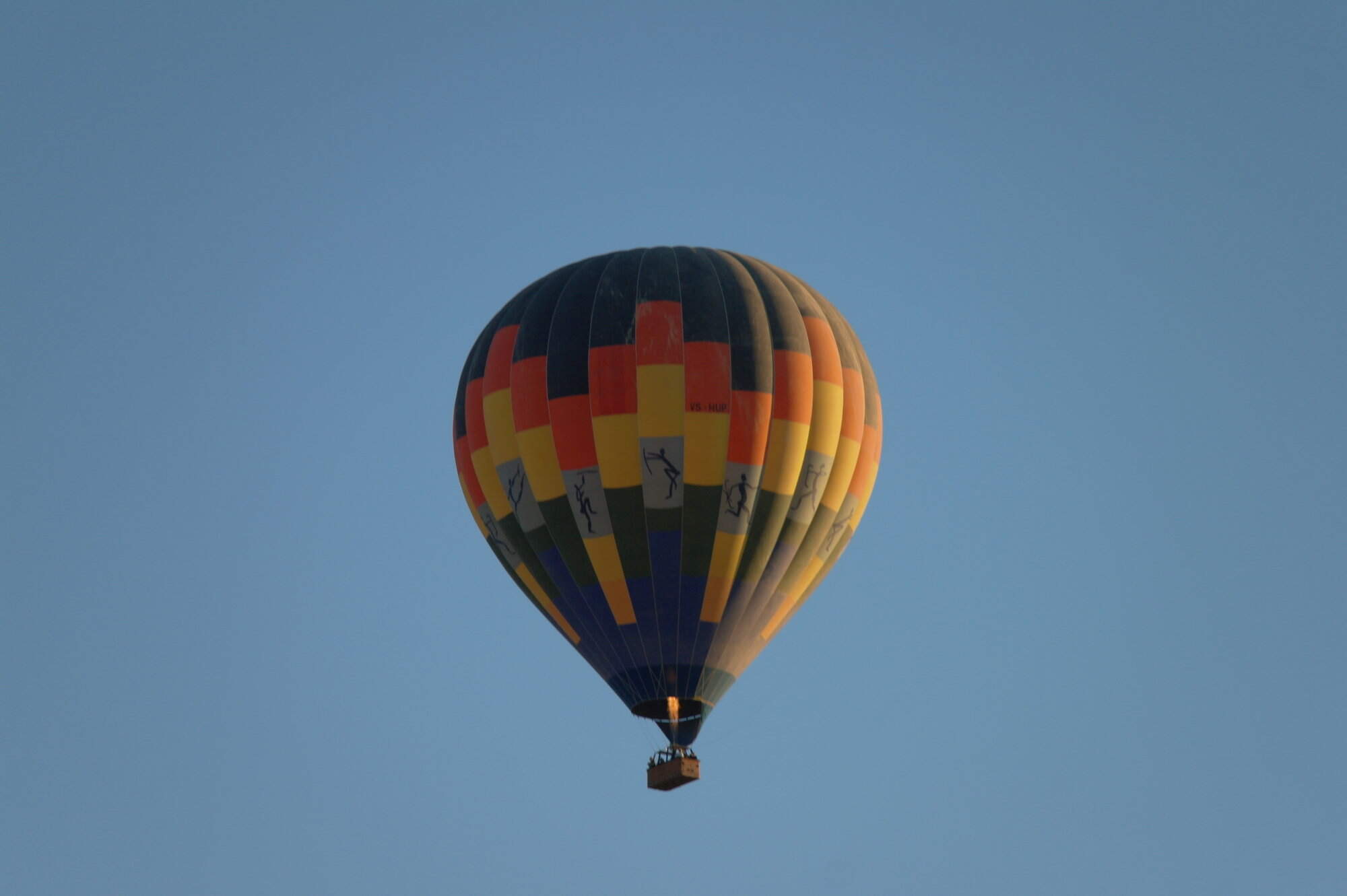 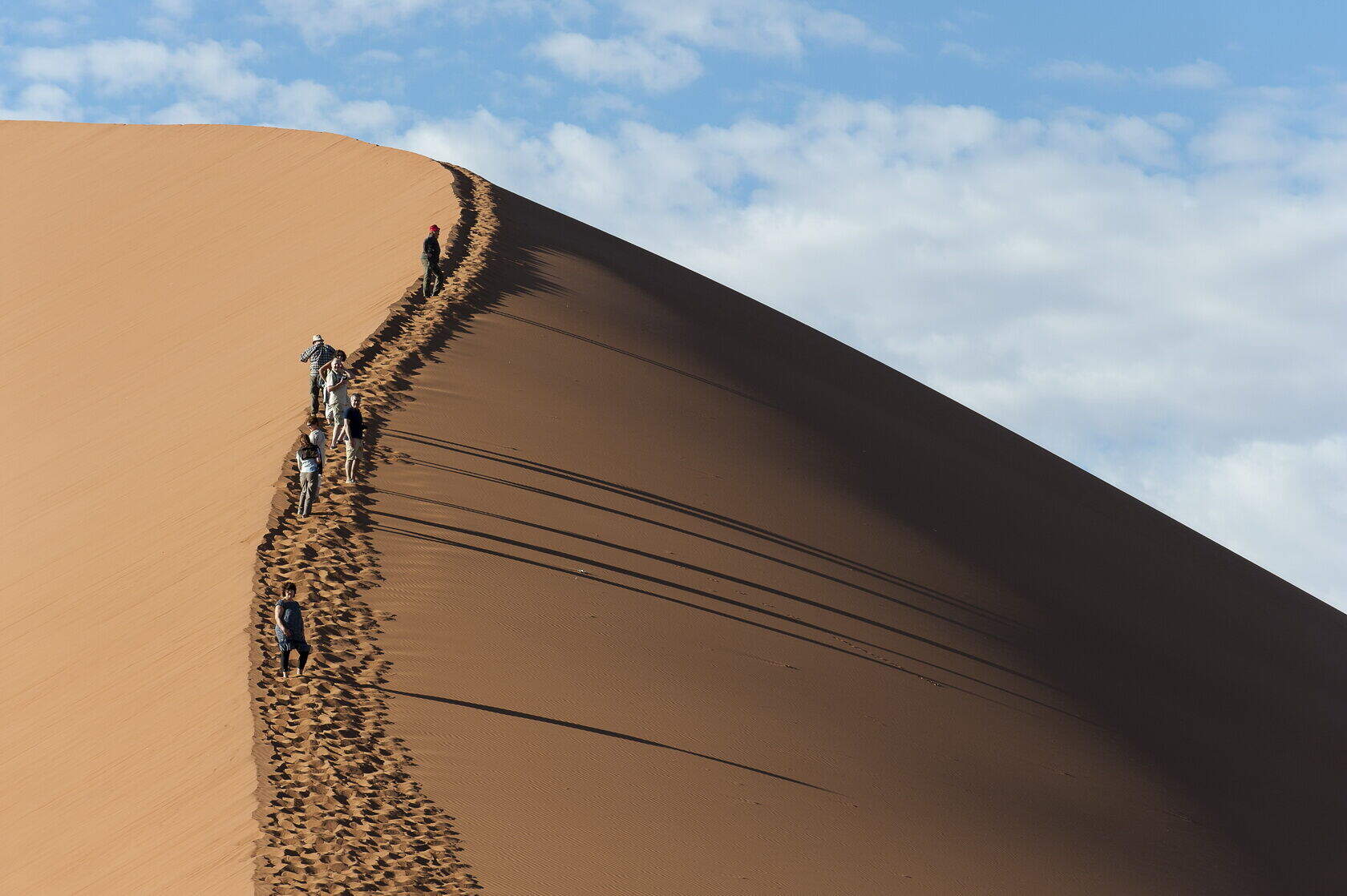 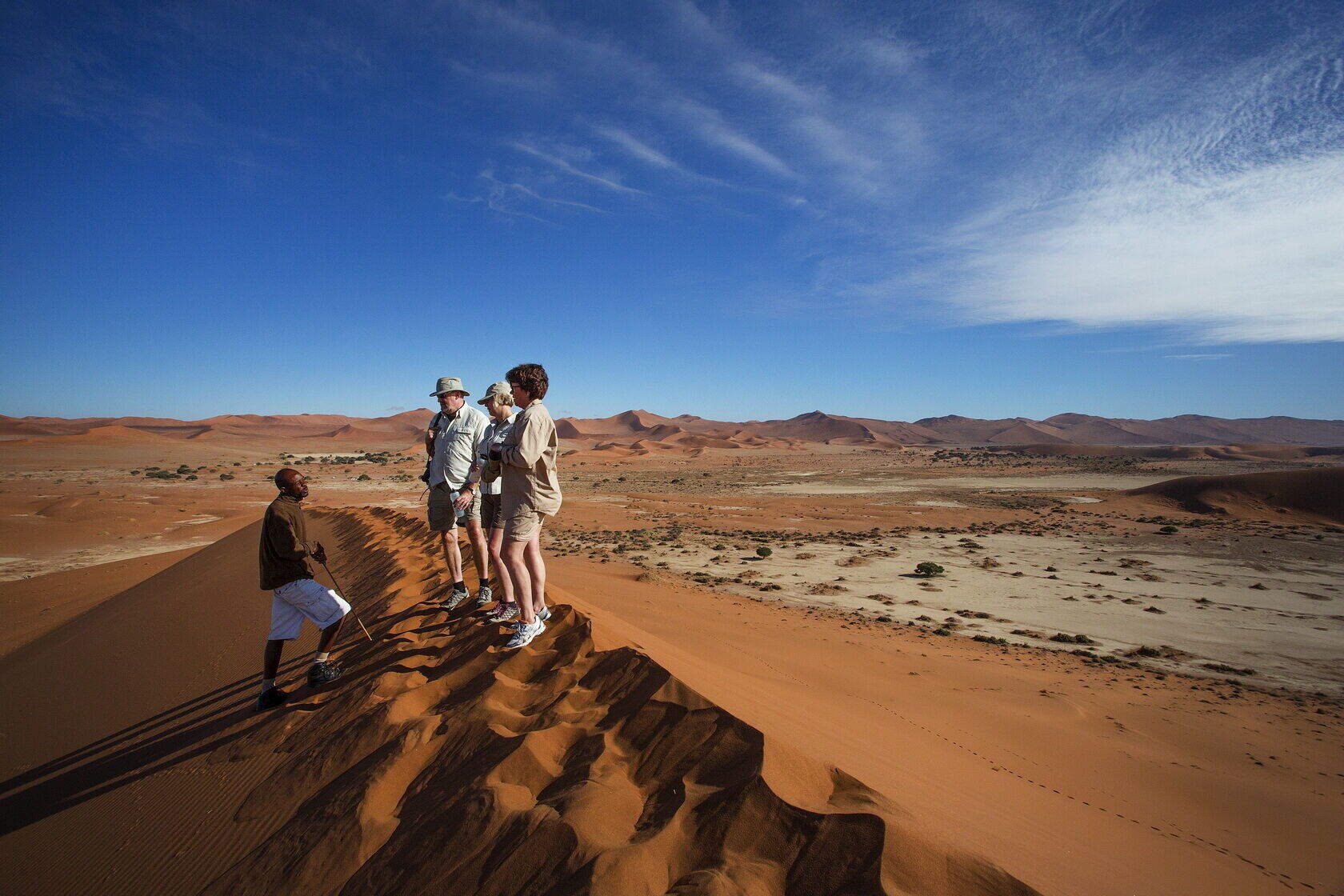 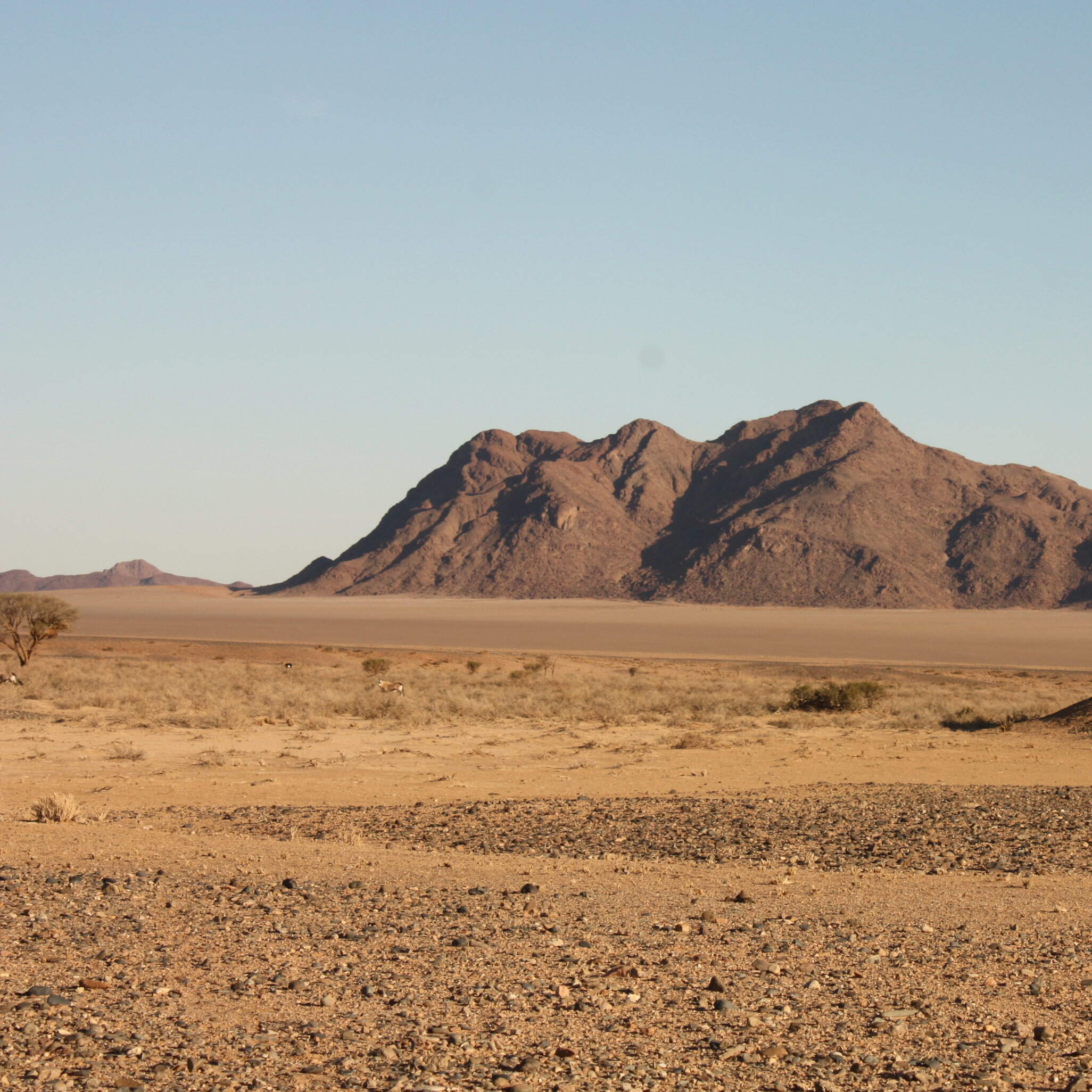 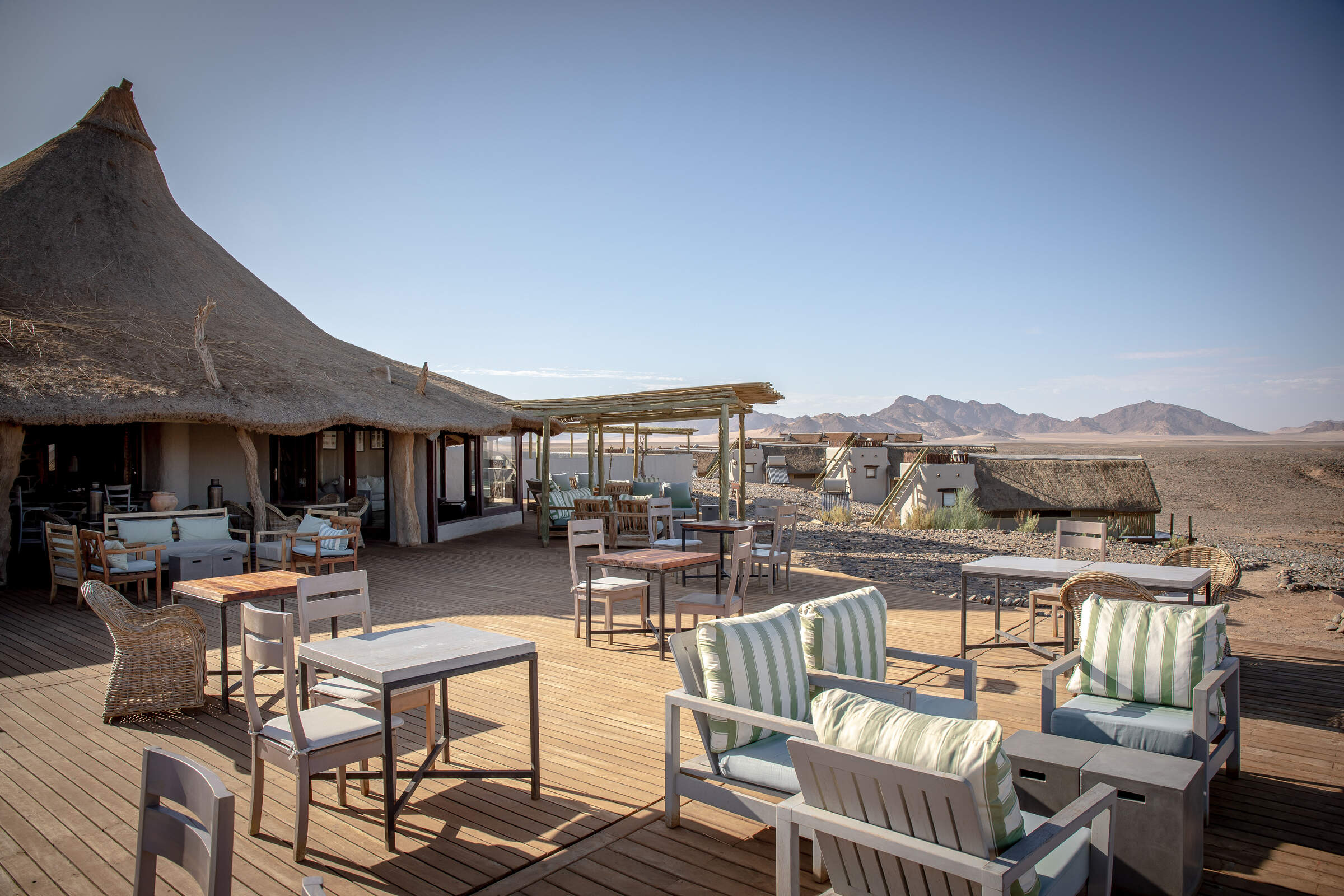 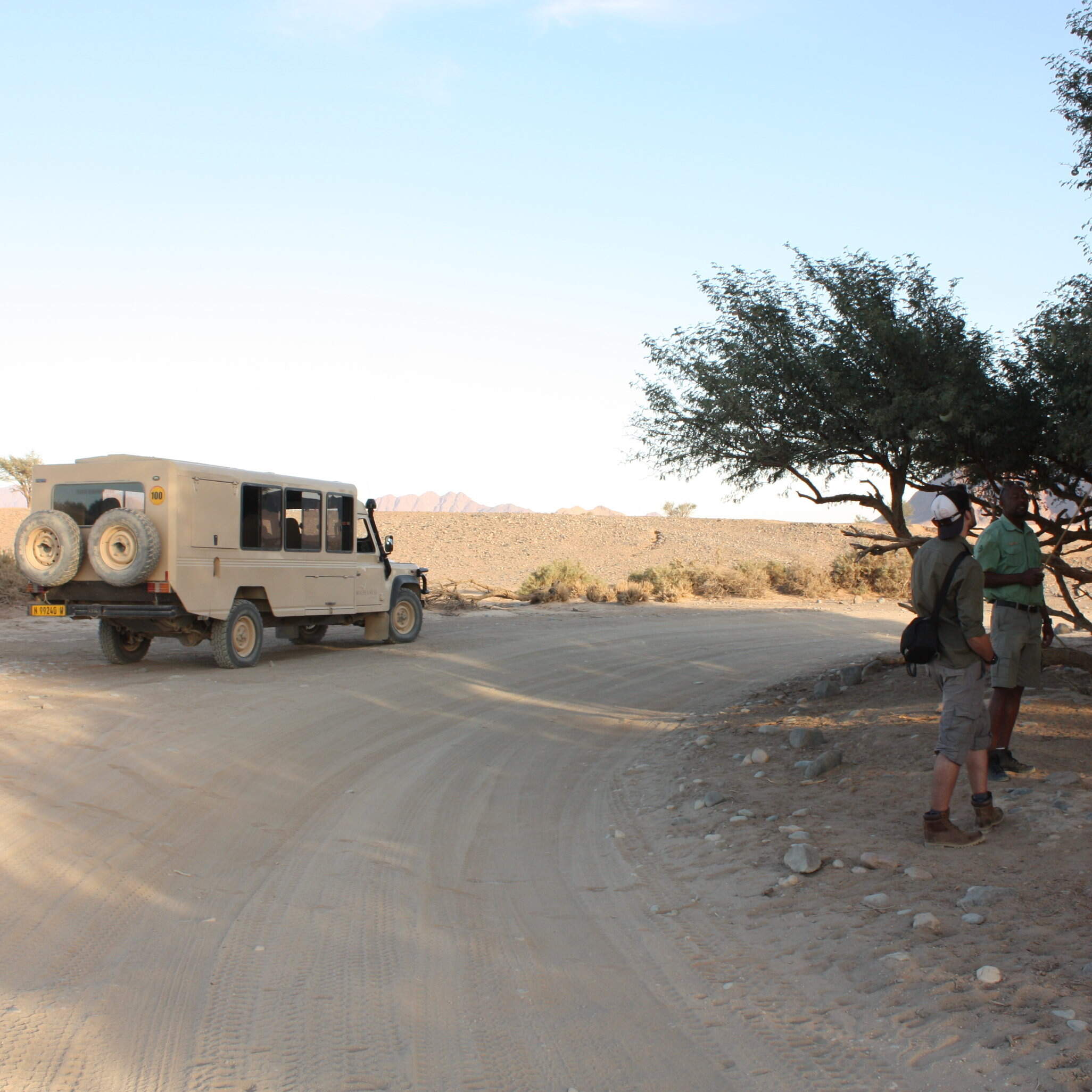 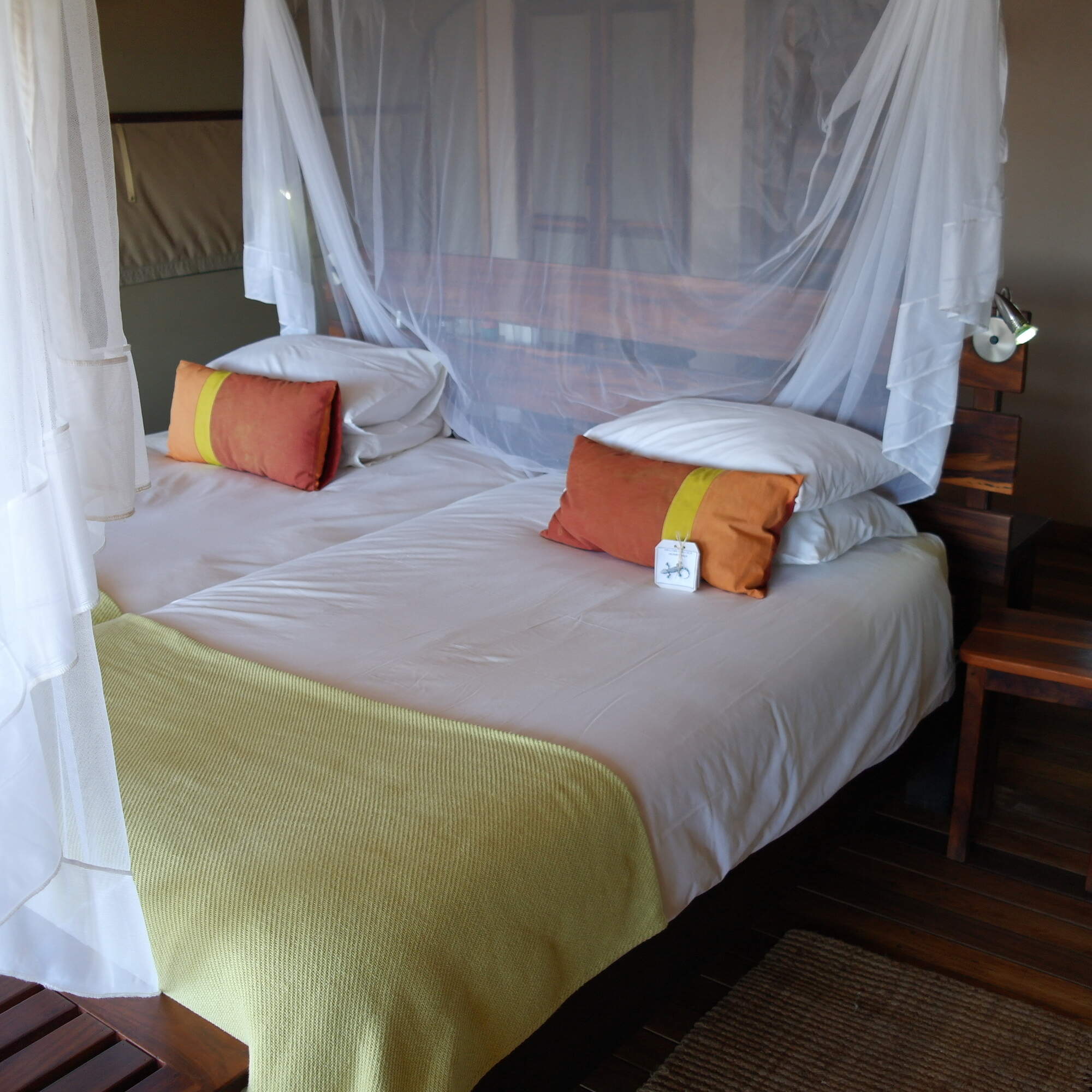 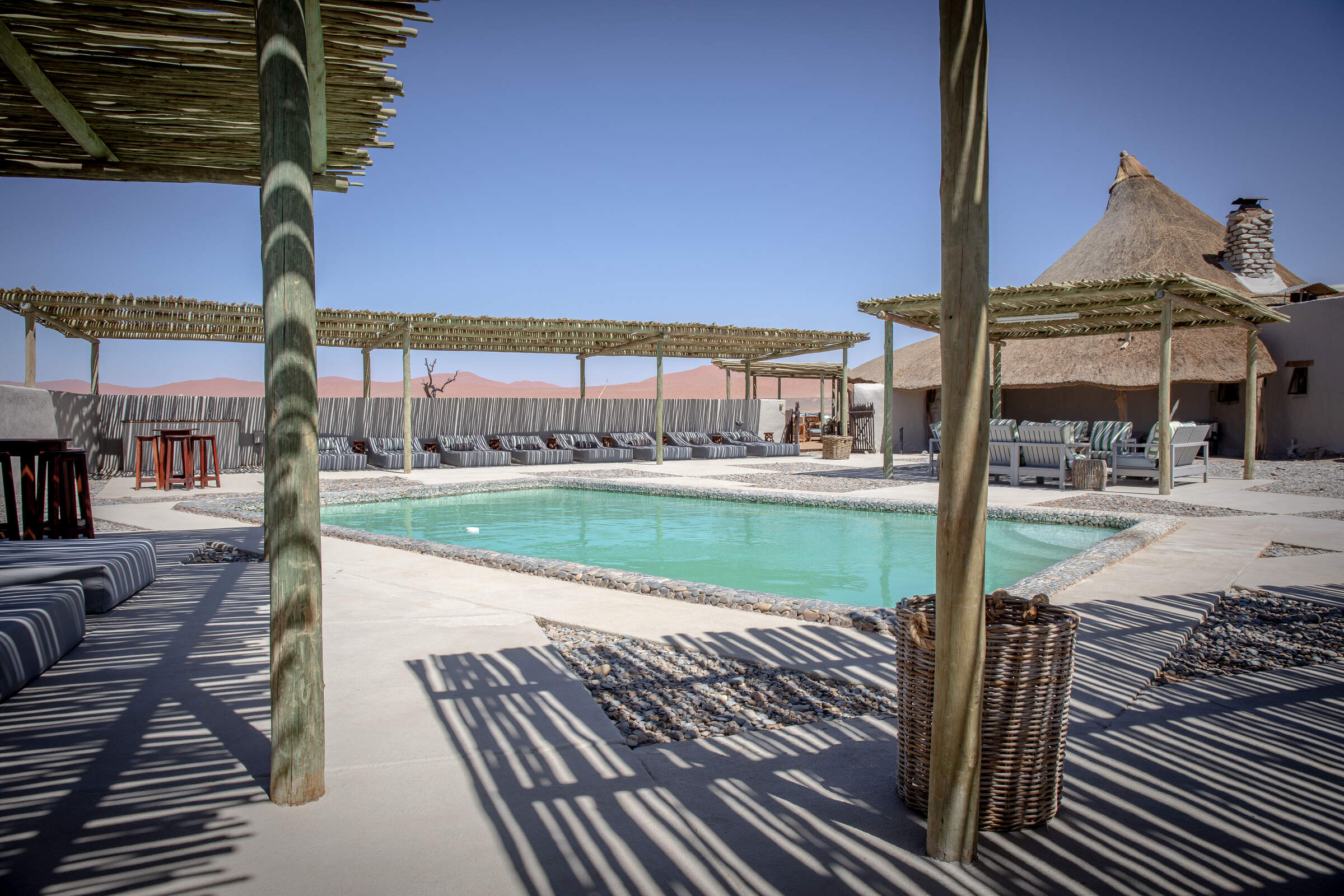 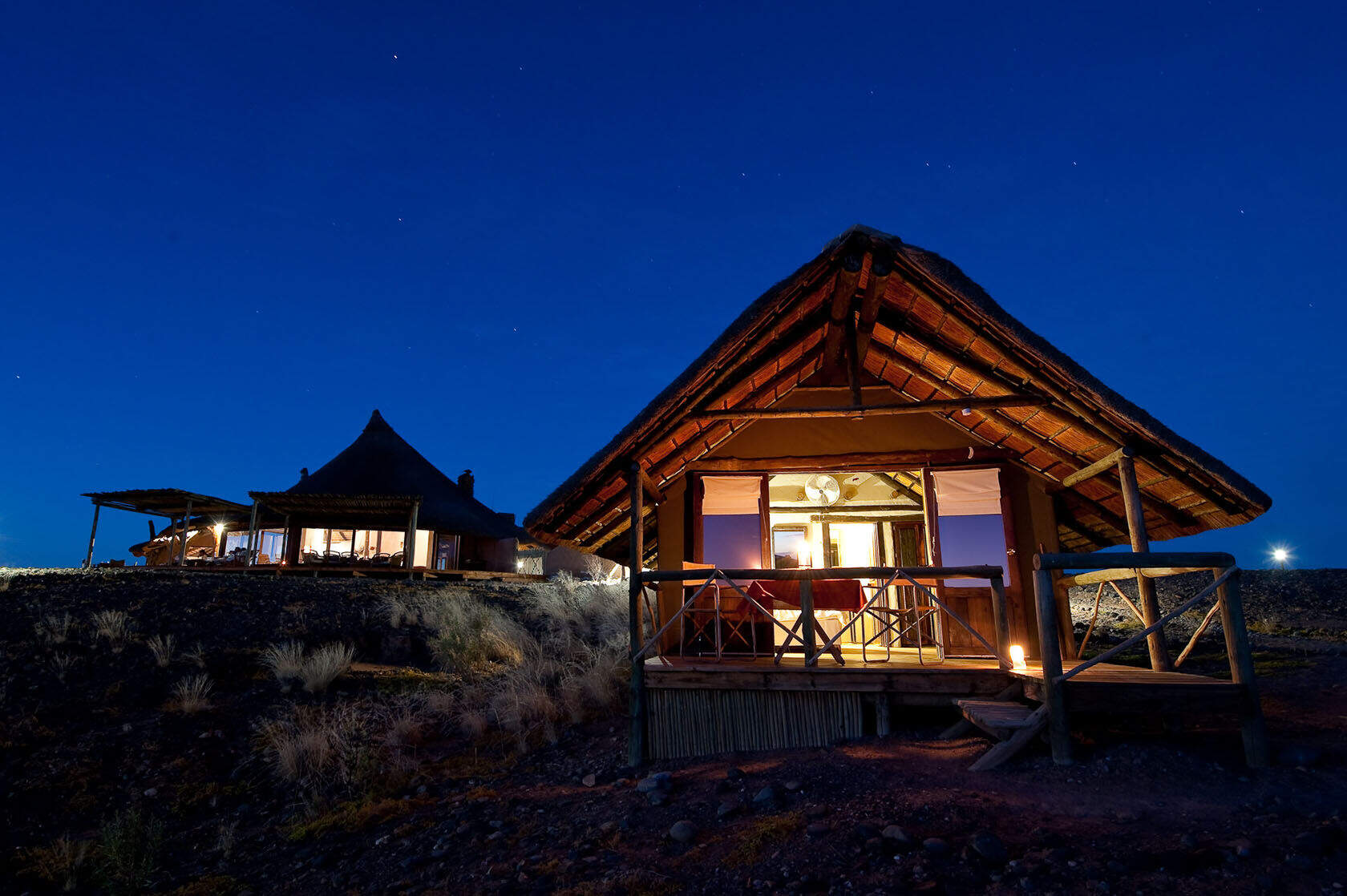 326 independent comments and wildlife information from our travellers who have visited Kulala Desert Lodge and kindly agreed to share their thoughts. They do not necessarily represent the views of Expert Africa

2 nights Arrived 15 Sep 2009
"As soon as you arrive in Sossusvlei it takes your breath away it is such a beautiful environment and Kulala Desert Lodge fits is perfectly. The chalet style rooms are amazing with views out from the porch stretching for miles with no obstruction from other chalets. You can sleep on the roof but it was a bit cold in September!

The staff here are very friendly and are only to happy to accomodate any of your needs, and you can join in with singing and dancing on alternate evenings but don't worry they don't pressure you join in, it is good fun to watch to, or sit by the open fire!

We had a brilliant guide Piertrus taking us on a sundowner nature drive and to watch the sunrise on Dune 45 along with a drive to Deadvlei, you can do these excursions yourself and save a few quid but we found the information the guide gave us very useful and would recomend it." See all these reviews: 13n in Namibia
Experience Report
Overall Rating:
Excellent
Location:
Excellent
Service:
Excellent
Activities:
Excellent
Rooms:
Excellent
Food:
Excellent
Facilities:
Excellent
Miss A & Miss L
UK

2 nights Arrived 12 Sep 2009
"I could not fault any of the staff or facilities at Kulala Desert Lodge. Our stay here could not have been made any more comfortable or relaxing.

Even the two guides who came upon us changing our punctured tyre before we had even reached the lodge could not have been any more helpful and cheerful!

Perhaps the only suggestion I would have is that if visitors are planning a hot air balloon trip, then to arrange this for their first full day in this area. Unfortunately we had ours planned for the day we were leaving and due to a sandstorm the previous day, the winds were still causing problems the following day so we were unable to do our balloon trip. If we had been staying another day, we might have then been able to do the balloon trip the next day." See all these reviews: 11n in Namibia; 2n in Zambia
Experience Report
Overall Rating:
Excellent
Location:
Excellent
Service:
Excellent
Activities:
Excellent
Rooms:
Excellent
Food:
Excellent
Facilities:
Excellent
Mr & Mrs P
Belgium

2 nights Arrived 8 Aug 2009
"Here we had a great welcome and detailed introduction and explanation of facilities and activities from the interim manager, but by the next day she was no longer around and there didn't seem to be anyone to replace her.

The rooms were lovely and our two kulalas were attached by a short verandah which was nice. However, there was a lot of noise from the generator until quite late and from cars arriving late and leaving early. There was also some bad smelling water in front of our lodge, perhaps from a leaking drain? The pool area was nice.

Rather than pay the very high price for an organised trip, we drove ourselves to Sossussvlei, which was really not far and was much cheaper as we just had to pay the park entrance fee. It also gave us the option to spend as long or as little time at the dunes as we wanted. The canyon is easily missed with the excitement of seeing Dune 45, but was really worth the walk." See all these reviews: 19n in Namibia
Experience Report
Overall Rating:
Good
Location:
Excellent
Service:
Good
Facilities:
Good
Rooms:
Good
Food:
Average
Professor & Mrs M
UK

2 nights Arrived 1 Aug 2009
"Another very atmospheric camp in a stunning location. We didn't take any of the paid trips as we thought they were over-priced; £100 a head for a trip to the dunes was too much, especially when with a little more trouble you can drive yourself (and experience the dunes in more solitude!).

A general point is that Expert Africa could perhaps give a little more guidance on self guided trips from some of the lodges, as an alternative to those provided (at quite a high cost) by the camps themselves. The Namibia guidebook provided is good, but some personal hints and tips from Expert Africa would be very helpful.

I did raise one safety point in my feedback to the camp - the ladders to the roofs on the lodges (on which you can sleep otdoors) were not secured at the top and an accident is likely to happen eventually." See all these reviews: 13n in Namibia
Experience Report
Overall Rating:
Excellent
Location:
Excellent
Service:
Good
Activities:
Average
Rooms:
Excellent
Food:
Good
Facilities:
Good
Mr & Mrs S
Norwich

2 nights Arrived 18 Jul 2009
"The place is nicely located and nothing wrong with the accomodation.

But we felt the activities are very expensive though, and what made it worse was the management couldn't explain why (we didn't think most of it was for the guide and it couldn't have been the transport cost or entrance fees, we checked the cost of the latter one...).

We asked two members of the management, once when confirming to go on the trip and in the end when paying. In general the quality of information by the management was not as good as in many other lodges.

Fortunately we did have an excellent guide on our trip to the dunes (Petrus), which is why I wouldn't rate service as "poor"" See all these reviews: 15n in Namibia; 4n in Botswana; 2n in Zambia
Experience Report
Overall Rating:
Good
Location:
Good
Service:
Average
Activities:
Good
Rooms:
Good
Food:
Good
Facilities:
Good
Miss F & Mr E
NL

2 nights Arrived 5 Jul 2009
"Wonderfully remote, again a very nice welcome after a long and dusty drive. Tremendous view from the room , and very nice touch for the staff to come and put some extra blankets on the beds and hot water bottles. Food was good.

We had a wonderful trip to Dune 45 and a sundowner to Sesriem canyon with Christoph, the best guide we had during our holiday to Namibia.

All the other staff were very attentive , courteous and professional, so much so we were sad to leave this wonderful place." See all these reviews: 15n in Namibia; 3n in South Africa
Experience Report
Overall Rating:
Excellent
Location:
Excellent
Service:
Excellent
Activities:
Excellent
Rooms:
Excellent
Food:
Excellent
Facilities:
Excellent
Mr & Mrs C
Chinnor

2 nights Arrived 28 Jun 2009
"A perfect place to stay if you want to access the dunes. We were the first people there in the morning and it felt like we had the whole place to ourselves. We could take some fantastic photos without any footprints in the sand.

The staff were very helpful and friendly

The food was good but I did feel that the puddings (quality rather than choice) could be improved upon." See all these reviews: 5n in Namibia
Experience Report
Overall Rating:
Excellent
Location:
Excellent
Service:
Excellent
Activities:
Excellent
Rooms:
Excellent
Food:
Average
Facilities:
Excellent
Feedback Response
These travelers asked us to organise several side-trips for them here. They commented -

1) About their Morning excursion to dunes:

Christoph, our guide, was great. He was friendly, helpful and knowledgeable.

It was really great - just right. Plenty of time to explore or just to watch the sun rise.

2) About their Early morning balooning trip:

Unfortunately this was cancelled on both occasions (apparently no one was able to go ballooning all week) due to the wind.
Mr & Mrs B
Hampshire

2 nights Arrived 13 Jun 2009
"The rooms were a bit tricky to access due to the uneven stony paths that were quite narrow and the steep steps upto the verandah. However, the tent and amazing views in such a peaceful location meant you did not want to go out. Again we were made to feel most welcome and able to relax.

The evening nature drive with N'gway (sorry for the spelling) was very infomative and he assisted John in and out of the vehicle in a very helpful and friendly manner.

The tour was expensive (compared to Anib Lodge which was a third of the price) although perhaps that is fairly standard in the Sesreim area." See all these reviews: 13n in Namibia
Experience Report
Overall Rating:
Excellent
Location:
Excellent
Service:
Excellent
Activities:
Good
Rooms:
Excellent
Food:
Good
Facilities:
Excellent
Showing 261-270 of 326
1...262728...33
Previous Next
92%
326 reviews of Kulala Desert Lodge by travellers since August 2007
Overall rating by our travellers
215
90
16
5
0
Filter by month

Bullsport is a cattle and game farm with thoroughbred horses offering warm hospitality and a genuine rural experience.

Barkhan Dune Retreat is a welcoming lodge close to the impressive Spreetshoogte Pass, majors on hiking and relaxation.