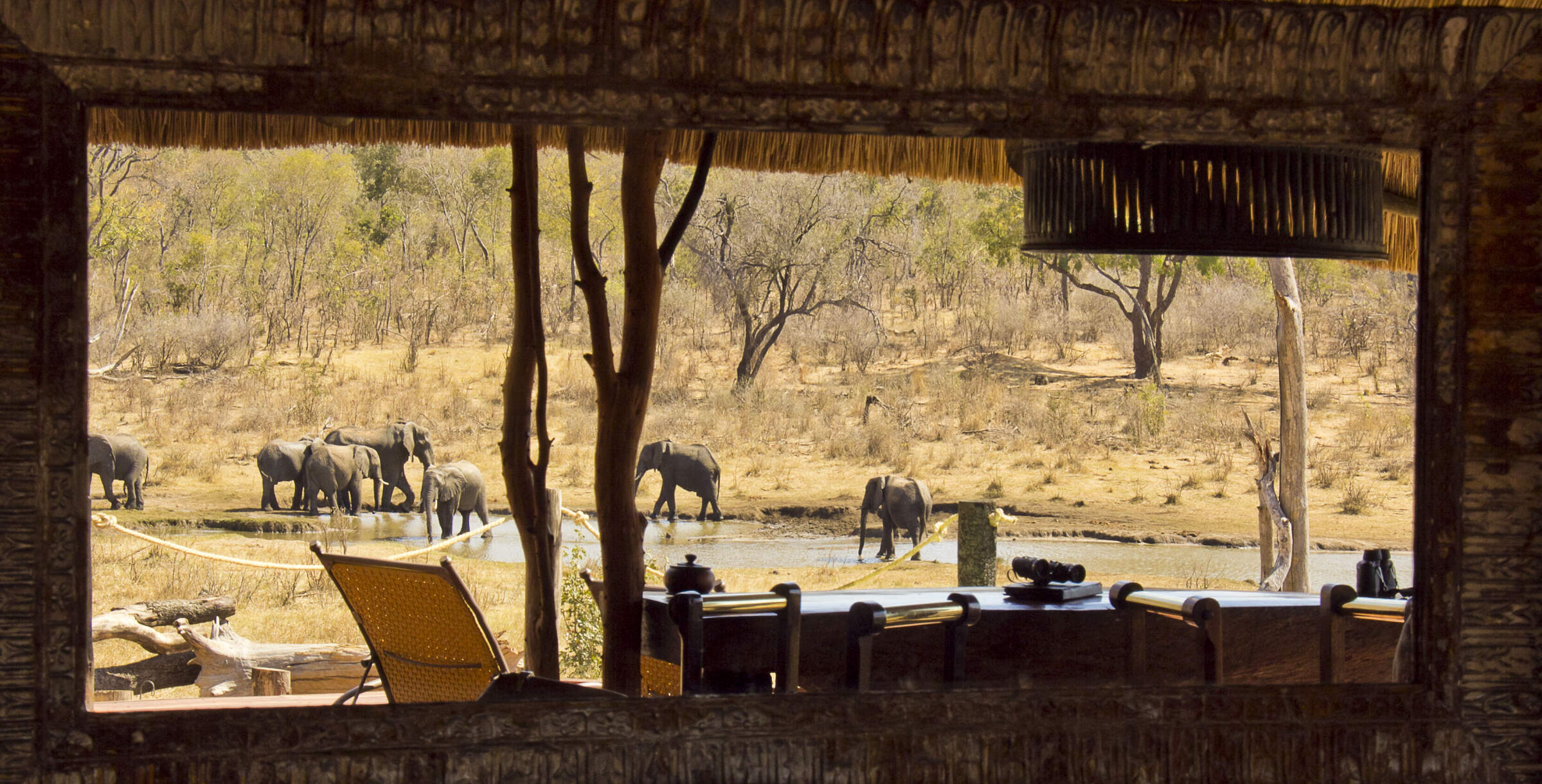 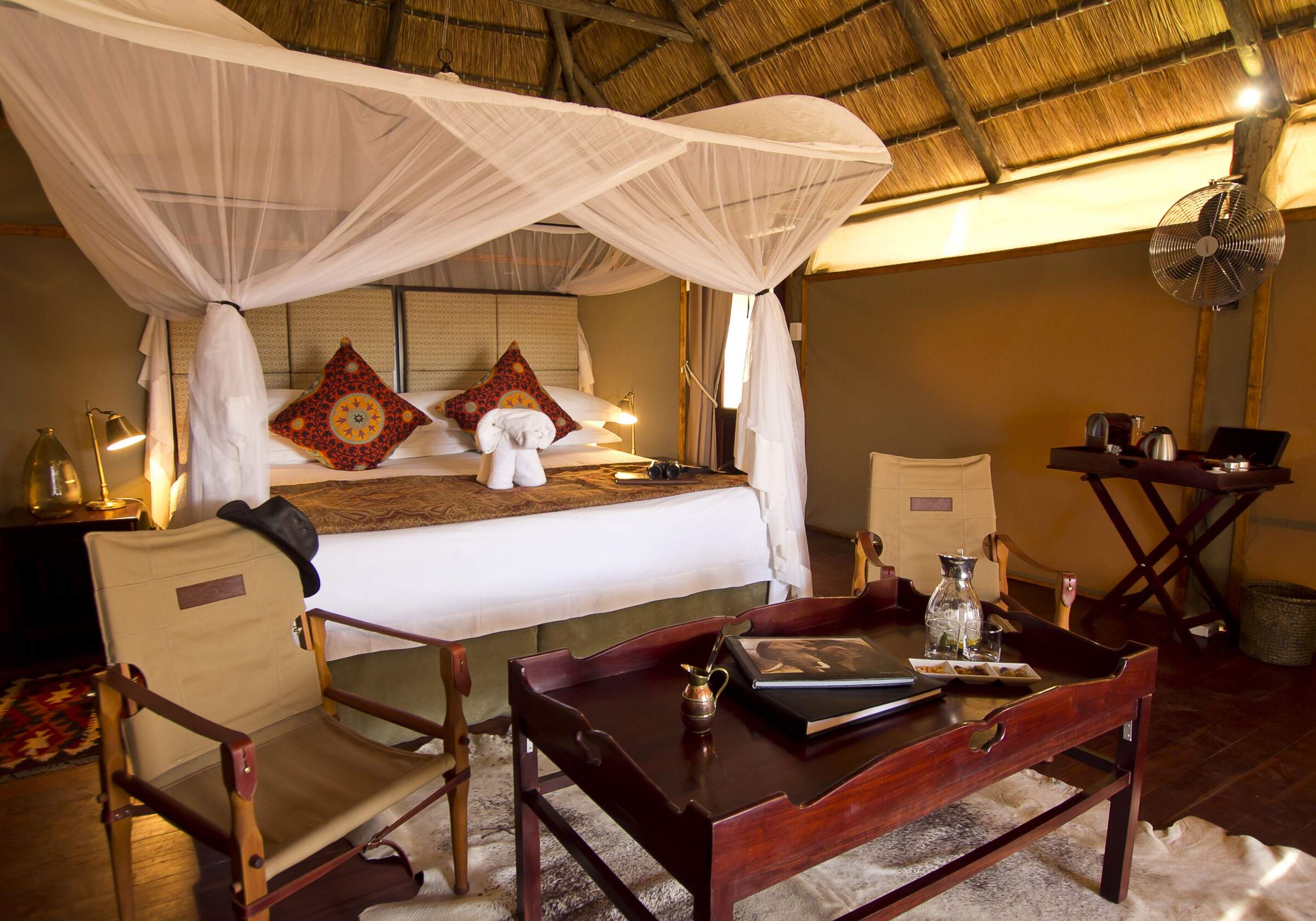 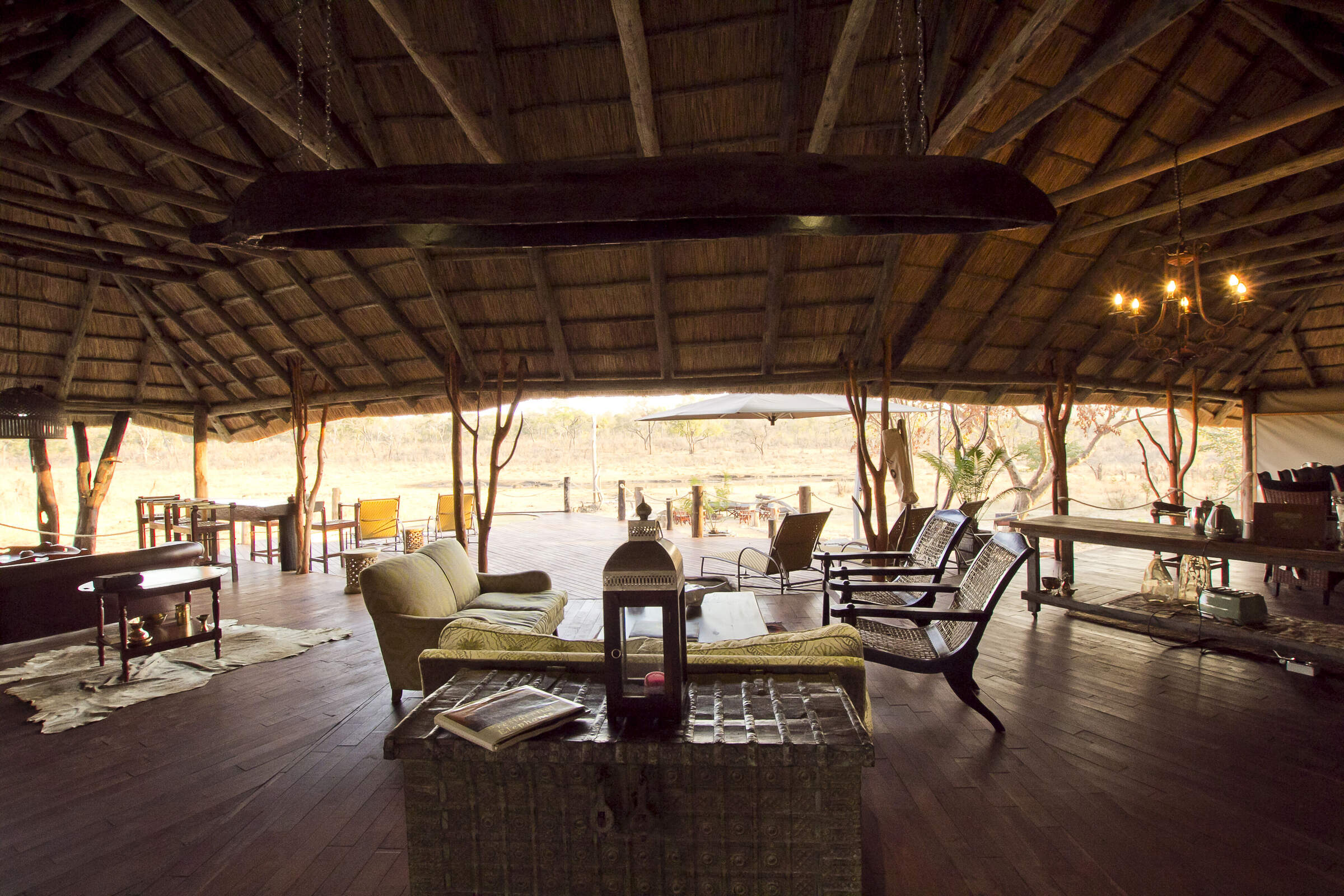 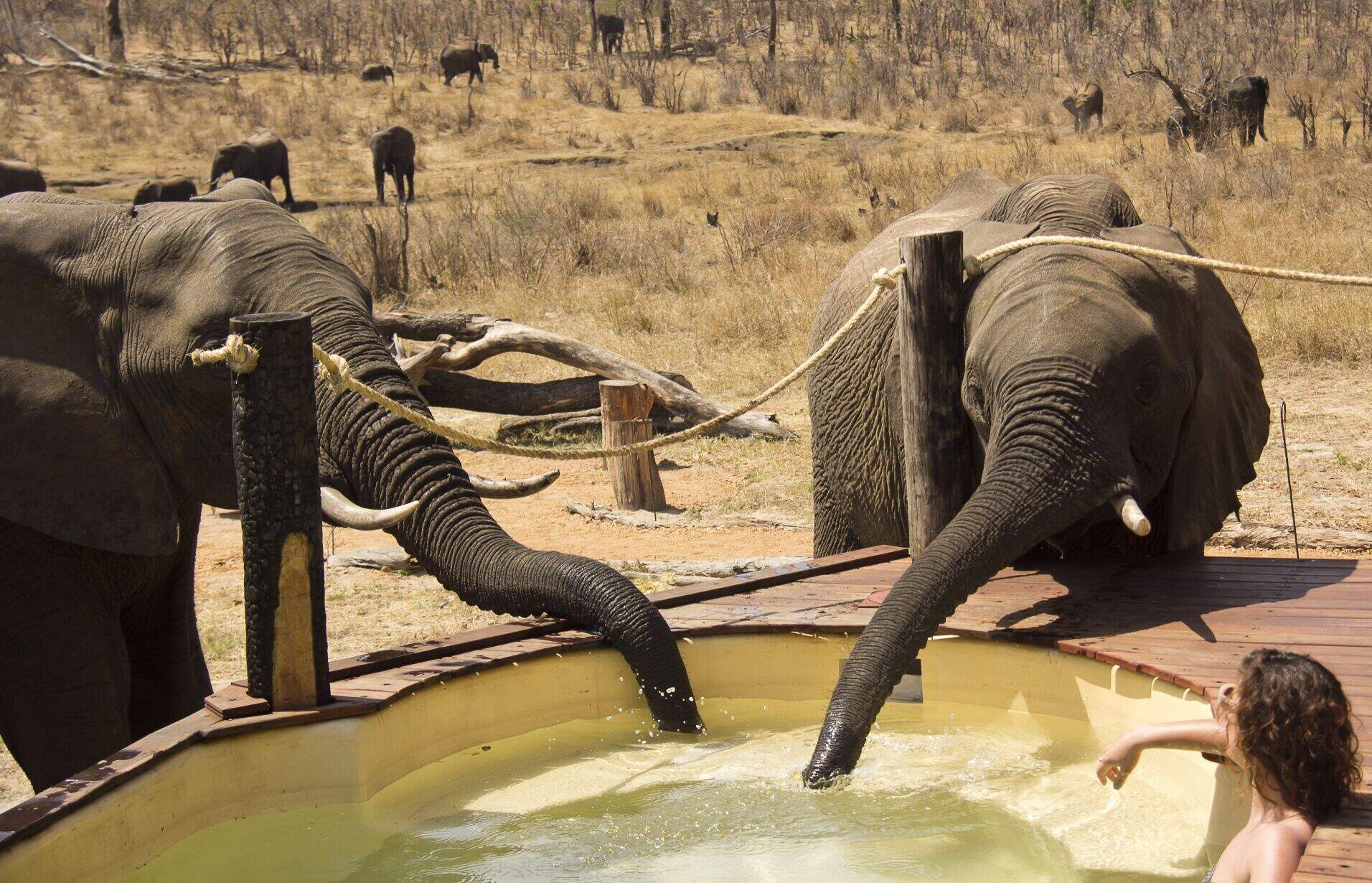 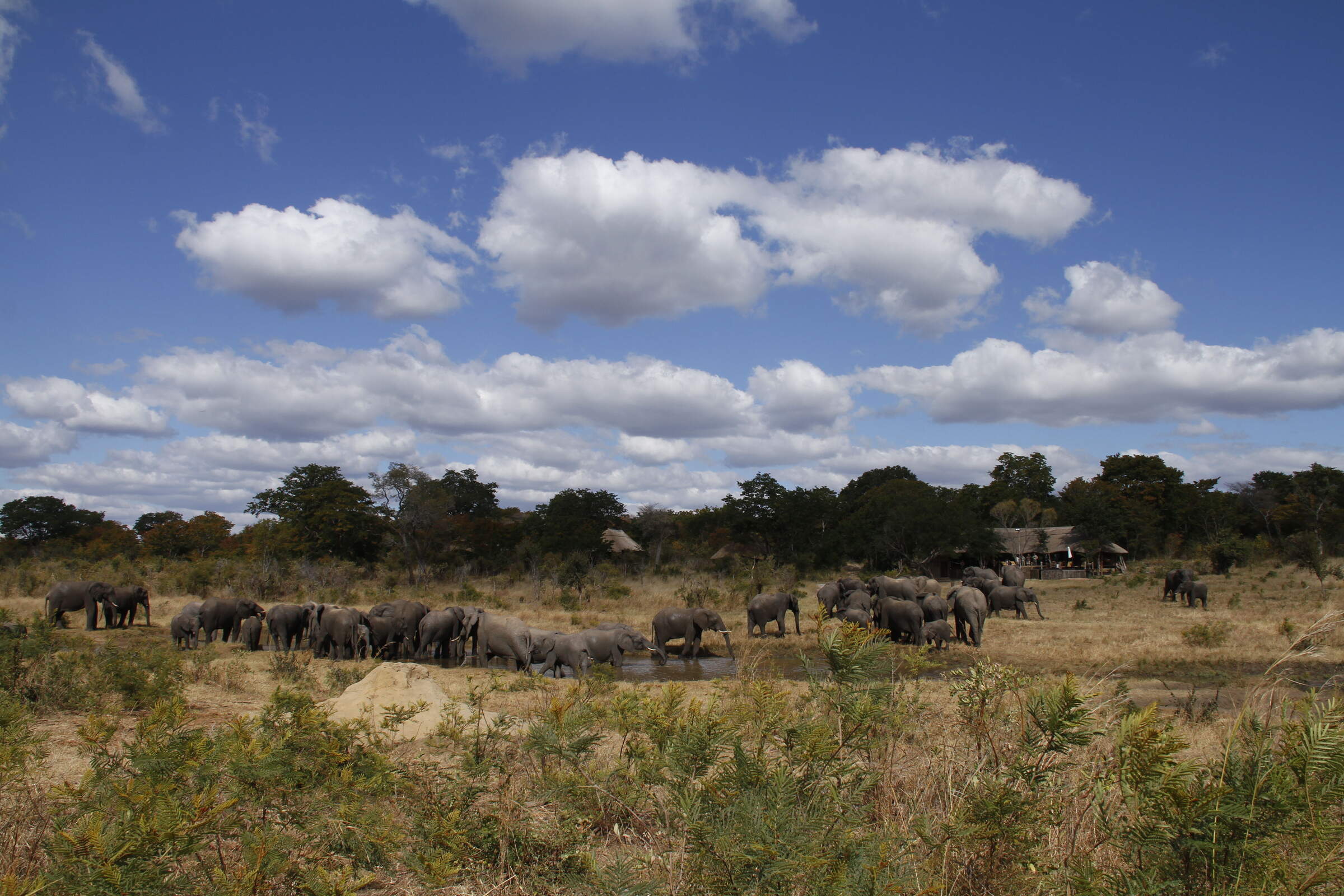 Less expensive than some of Hwange's camps, it is situated in the Sikumi Forest Reserve adjacent to Zimbabwe’s Hwange National Park. The camp overlooks a waterhole, which in the dry season is frequented by large herds of elephant – which also enjoy drinking from the camp’s pool.

Khulu Bush Camp shares a private reserve with its two sister camps: the larger and more established Ivory Lodge, and a private villa, Khulu’s Retreat. All three benefit from the flexibility of being in a private concession while still having easy access to the national park.

Khulu Bush Camp has just six tented chalets, each elevated on stilts and reached via steps onto a private, shaded deck, where a couple of high directors' chairs look down towards the waterhole.

Glass doors secured with a latch (primarily to deter monkeys and baboons) open to reveal very comfortable twin beds that can be converted into king-size, and a small seating area. Mosquito nets curtain the beds at night, electric blankets are provided in the colder months, and a wall-mounted fan helps airflow on warmer days, as do mesh windows whose canvas flaps can be opened or closed as preferred. There's also a minibar which is filled on request and a tea- and coffee-making station complete with Nespresso machine. While the rooms are nicely designed, when we stayed in November 2017 we felt that they would benefit from additional storage for luggage and a little more lighting.

At the rear of each tent, the en-suite bathroom has his and hers basins and both inside and outside showers. The flush toilet is separated by a partition. Hairdryers, cotton robes and a selection of toiletries come as standard.


Khulu's main area is an open-plan and airy thatched building which overlooks the camp's plunge pool and the waterhole beyond. The décor is tasteful, with locally sourced furniture and ornaments. As well as a comfortable seating area, with a small selection of reference books, you'll find a long dining table where communal evening meals are taken. We found the staff at Khulu very attentive and the whole camp felt relaxed but efficient. There is usually a member of staff around to serve you from the camp's well-stocked fridge and drinks cabinet, but if not, guests are welcome to help themselves.

A few steps lead down from the pool deck to the camp's firepit, which is at ground level and closer to the waterhole, so a great spot from which to enjoy wildlife viewing and birdwatching.

Guests arriving at camp may be surprised to find the plunge pool looking rather dirty. This seemed somewhat out of character with the rest of the camp, but as we sat eating our lunch on the deck, the mystery was solved. Several elephants appeared from the surrounding bush, bypassed the waterhole, and headed straight for a drink at Khulu's pool. The next morning the mess had been cleaned up and the pool was full and sparkling again, although it wasn't long before the elephants re-emerged and proceeded to reclaim it as their own.

Activities at Khulu include morning and afternoon guided game drives, both within the Sikumi Forest Reserve and into Hwange National Park. For those staying more than a couple of nights, a full-day sortie into the park is well worth considering. Guided walking safaris are also available and we recommend you try this activity at least once. Afternoon game drives tend to stick to the reserve, allowing for a spotlit night drive back to camp, which is not allowed within the national park. Spotlit night drives after dinner are also an option on request – although these may not be possible after the rains, when the bush is at its thickest.

On a previous visit, we were very impressed by the knowledge of our guide and his experience of the bush. One morning we walked through some relatively thick vegetation, finding elephant along the way, and we always had confidence in his ability. He was also a charismatic and entertaining host and we very much enjoyed spending time with him.

Guests at Khulu Bush Camp can also visit the Painted Dog Conservation Trust, which is not far from camp. They are doing some great rehabilitation work with wild dog that is well worth supporting, and we can thoroughly recommend a visit.

Khulu Bush Camp is owned and run by a small, efficient and committed team. With easy access to Hwange National Park as well as the flexibility afforded by its location on a private concession, it’s a great base from which to explore. The tented chalets are comfortable and generally well appointed, the guiding is very good, and the setting spectacular; in terms of value for money there are very few better options in the Hwange region.

For some diversity, a stay here combines really well with its sister camp, Amalinda Lodge, in the fascinating Matobo Hills area.
Directions
Khulu Bush Camp is only a couple of kilometres off the main Bulawayo–Victoria Falls road, so the easiest access is by road transfer: from Victoria Falls (2hr 30min) or Bulawayo (4hr 30min). It's also possible to fly in, with Hwange Airport only 8km away.
Accessible by
Fly-and-Transfer

Usual board basis
Full Board & Activities
Food quality
Over several stays, including most recently in November 2017, the food at Khulu Bush Camp has been of a very good and hearty standard.

Breakfast is typically a buffet with a wonderful selection of cereals, yoghurt, fresh fruit, cold meats, cheeses, muffins and biscuits. Eggs are cooked to order and come with a choice of sausages, bacon, tomato, beans, onions and toast. It's quite an informal and flexible set up; we ate out on the deck, watching the seemingly ever present elephants drink from the pool again.

We didn’t have time for lunch on our last visit, but on previous occasions we have enjoyed a sizeable portion of spaghetti carbonara with a Greek salad, and a T-bone steak with potato wedges and beetroot and apple coleslaw, rounded off by strawberry ice cream: delicious, if a little heavy in the heat of the day.

Our dinner was a traditional braai (barbecue) of beef fillet, boerewors and chicken served with roasted vegtables, pap and relish. Dessert was a cappuccino brownie. More typically, dinner is a three-course meal, when on a previous visit we enjoyed Moroccan lamb, couscous and grilled vegetables, preceded by a salmon stack entrée, and rounded off by chocolate mousse.

Malarial protection recommended
Yes
Medical care
There is a clinic at Hwange Main Camp and the management staff and guides at Khulu are first-aid trained. A medical air rescue service (MARS) covering Hwange is available in the event of an emergency.
Dangerous animals
High Risk
Security measures
As is the norm in safari camps where dangerous wildlife is around, all guests are walked between their tents and the main area after dark. Air horns are provided in the chalets to attract attention in the event of an emergency.
Fire safety
There are fire extinguishers in the chalets and in the main area.

Disabled access
On Request
Laundry facilities
A complimentary laundry service is provided.
Money
There are safes in each of the rooms as and a safe in the main area too.
Accepted payment on location
Visa and Mastercard are accepted, as are US dollars, South African dand, British pounds and euros.