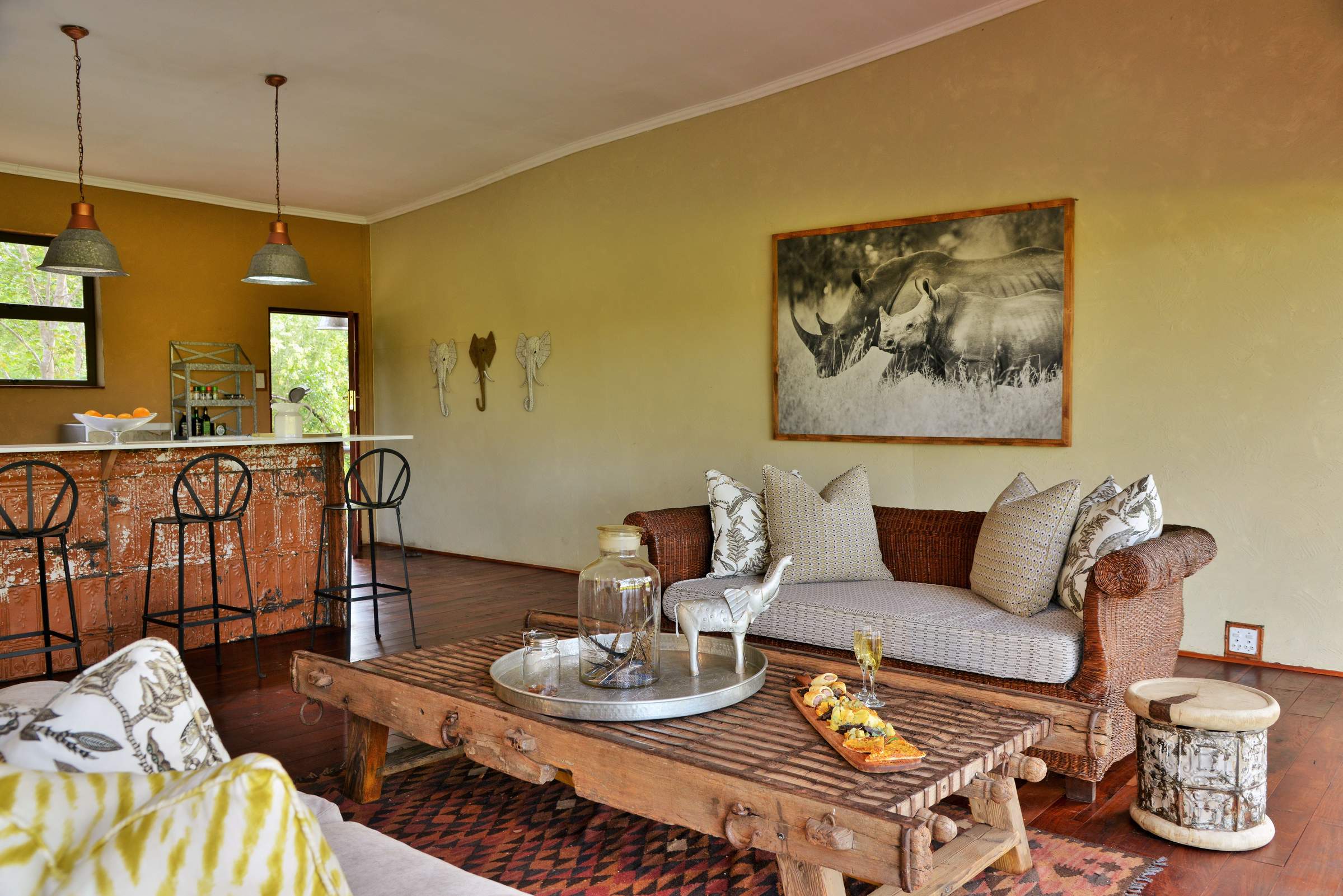 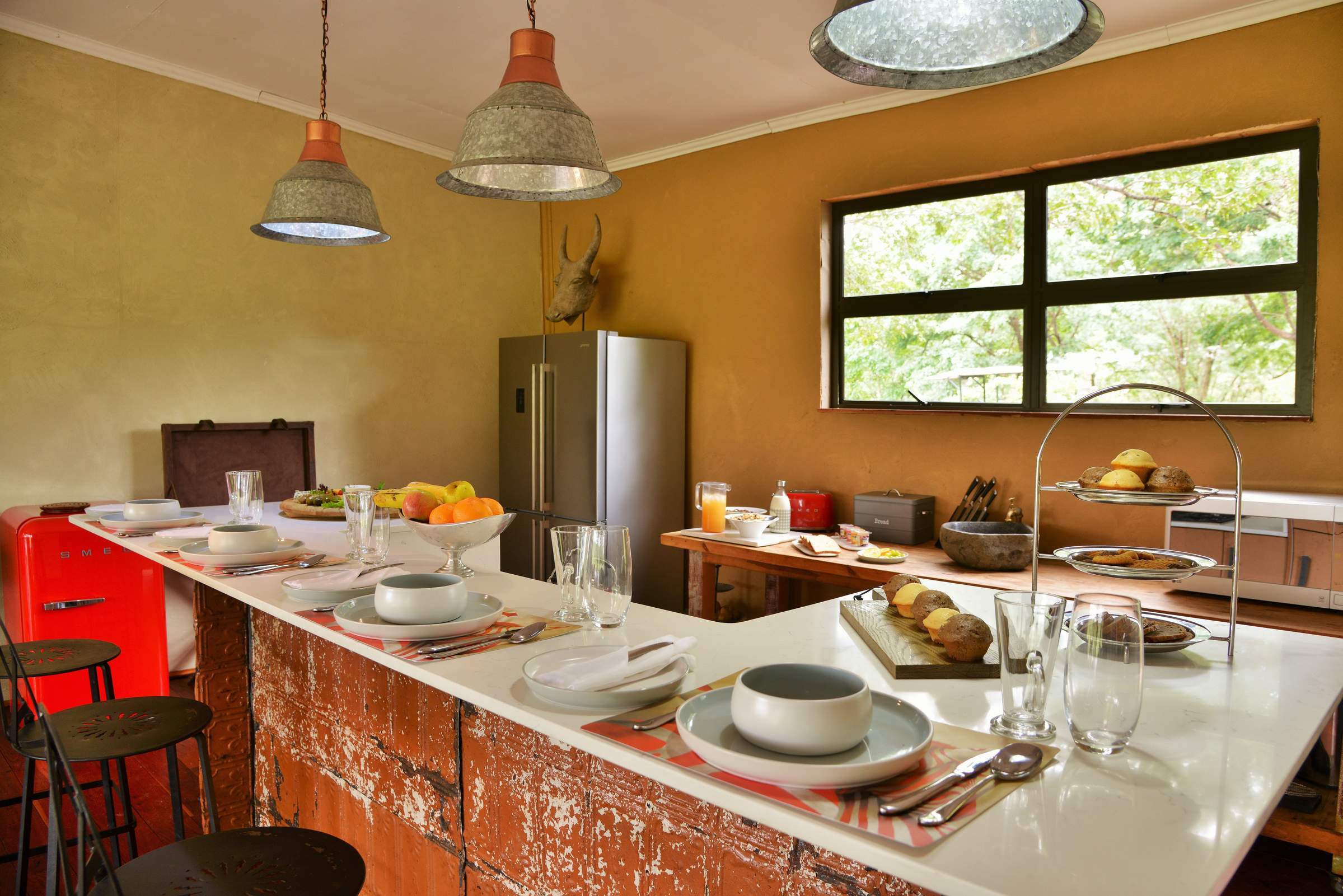 From its home in the Sikumi Forest Reserve, a short drive from the main entrance to Hwange National Park, ...

... the exclusive Khulu's Retreat aims to be the ultimate hideaway villa. Although the reserve itself attracts huge herds of elephant in the dry season, it’s the wildlife within the park that remains the main draw of this area of western Zimbabwe.

The villa was still under construction when we visited in November 2017 but here is what we know:

Khulu's Retreat is located on the same private reserve as its sister camps within the Amalinda Collection: Ivory Lodge and Khulu Bush Camp, but it seems that it is aspiring to meet or exceed the standards at the smarter Amalinda Lodge in the Matobo Hills.

The villa's two en-suite bedrooms are separated by an open-plan kitchen/lounge/dining area, where a private chef prepares meals behind a breakfast bar, in full view of guests. This main area opens onto a large deck that looks out beyond a firepit to the reserve’s forest and grassland. Although the Retreat is close to Kulu Bush Camp (in the dry season, when the foliage is sparse, you can make out the bush camp’s waterhole in the distance), it operates completely independently.

The two bedrooms are identical, their clean, modern design set against high ceilings, crisp white linen, large windows and a canvas front. The canvas can be unzipped to allow the breeze to circulate through a fly screen, or the whole front section of the room can be opened up to make the most of the views. In keeping with the open-plan style, there are his and hers basins in the room itself, with a rain-effect shower afforded some privacy by a folding screen and a separate toilet cubical.

As you’d expect in such an exclusive villa, guests here are given a private guide and vehicle for their activities. Options are generally the same as at Ivory lodge and Khulu Bush Camp, but with the greater flexibility afforded by personal guiding. These include morning and afternoon drives both in the concession and the neighbouring Hwange National Park, full-day trips into the park, walking safaris and night drives. We've had some great experiences with the Amalinda Collection’s guiding teams, so would anticipate guiding to be of a similar standard here. Trips to the Painted Dog Conservation Trust can also be arranged on request.

Designed to sleep four, the villa at Khulu's Retreat is perfectly suited for a couple, family or friends travelling together who want to treat themselves to something special or simply to enjoy a more private safari experience. Although the game in the forest reserve isn't as prolific as that in Hwange National Park, access to the latter is easy.

Location
Hwange National Park, Zimbabwe
Ideal length of stay
We recommend a three-night stay at Khulu's Retreat. The villa combines really well with Amalinda Lodge, its sister camp in the fascinating Matobo Hills area.
Directions
Khulu's Retreat is only a couple of kilometres off the main Bulawayo–Victoria Falls road, so the easiest access is by road transfer: from Victoria Falls (2hr 30min) or Bulawayo (4hr 30min). It's also possible to fly in, with Hwange Airport only 8km away.
Accessible by
Fly-and-Transfer

Usual board basis
Full Board & Activities
Food quality
We would expect the food at Khulu’s Retreat to be similar in style and quality to that at its sister camps. With a private chef there should also be plenty of flexibility and dietary requirements shouldn't be a problem, as long as sufficient notice is given. Based on other properties within the Amalinda Collection, you might expect the following:

Lunch will typically be a set menu with home-made bread, salad, a main course and a dessert.

Dinner is almost certainly going to be a three-course meal, although on occasion a traditional braai (barbecue) might be offered.

Attitude towards children
Given the private nature of the Retreat we would expect it to be a good option for families.
Property’s age restrictions
Children aged 5 and over are accepted at Khulu’s Retreat. Children younger than this may be accepted on a case-by-case basis.
Special activities & services
There are no specific activities for children offered here. However as guests at the Retreat have a private vehicle and guide we would expect activities to be relatively flexible.
Equipment
None
Generally recommended for children
Given the open nature of the villa and the potential for dangerous game in the vicinity we recommend the retreat of children aged 10 and up. For younger children Ivory Lodge, with its fence, might be a better if less exclusive option.
Notes
Due to raised decking with no handrails and the potential for dangerous wildlife children will need supervision at all times.

Power supply notes
There is a back-up generator available in the event of a power cut. Each room has charging points that take South African-style plugs, with three large round pins.
Communications
There is patchy cellphone reception at Khulu's Retreat and WiFi is available in the main area.
TV & radio
None
Water supply
Borehole
Water supply notes
The Retreat has flush toilets and hot and cold running water.

Malarial protection recommended
Yes
Medical care
There is a clinic at Hwange Main Camp and the management staff and guides at Khulu are all first-aid trained. A medical air rescue service (MARS) covering Hwange is available in the event of an emergency.
Dangerous animals
High Risk
Security measures
Air horns in the rooms can be used to attract attention in the event of an emergency. The Retreats managers/guide quarters are near by so they can provide emergency assistance throughout your stay.
Fire safety
There are fire extinguishers in the rooms and in the main area.

Disabled access
On Request
Laundry facilities
A complimentary laundry service is provided at Khulu's Retreat.
Money
There is a safe in each of the bedrooms.
Accepted payment on location
Visa and Mastercard are accepted as are US dollars, South African rand, British pounds and euros.