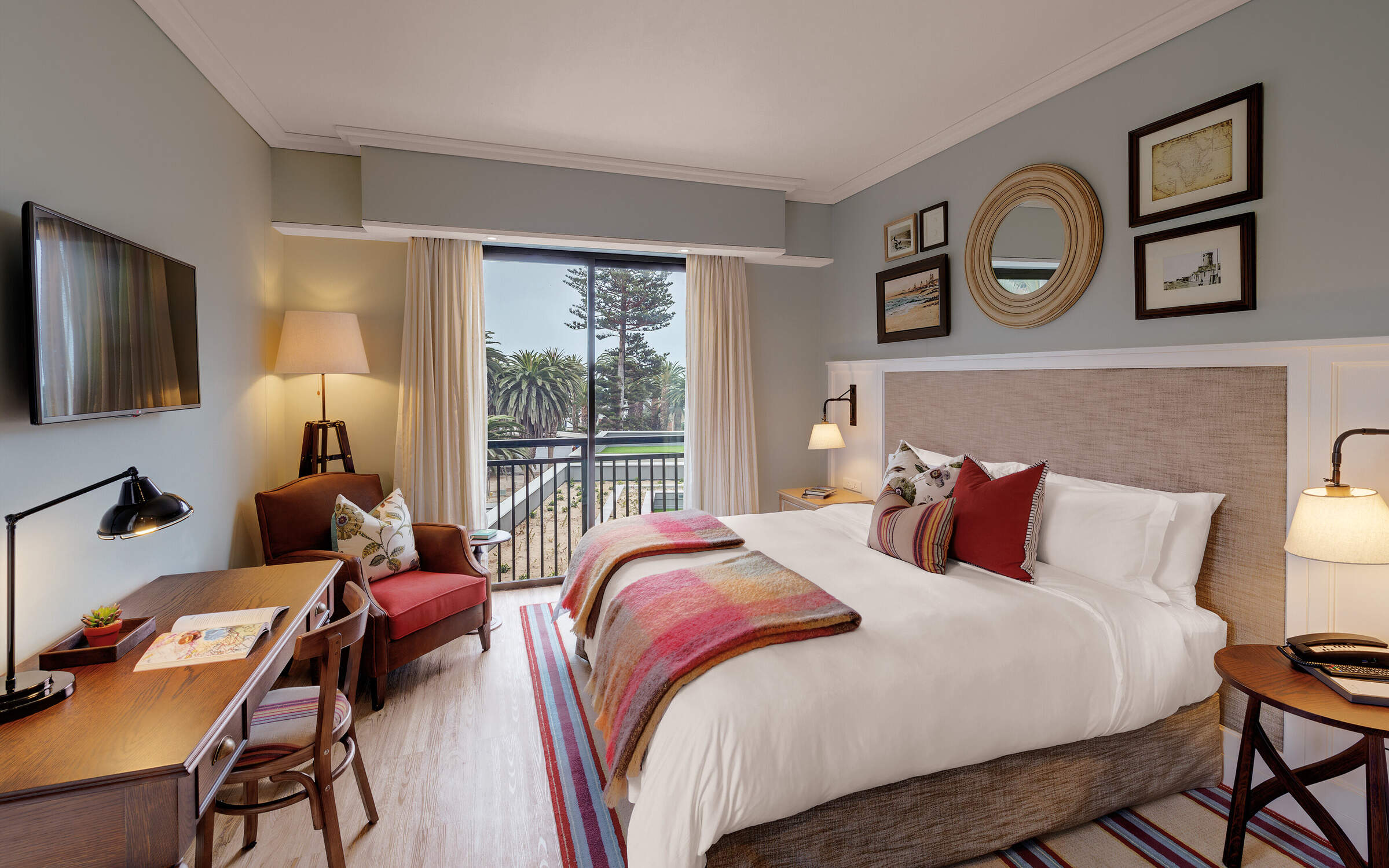 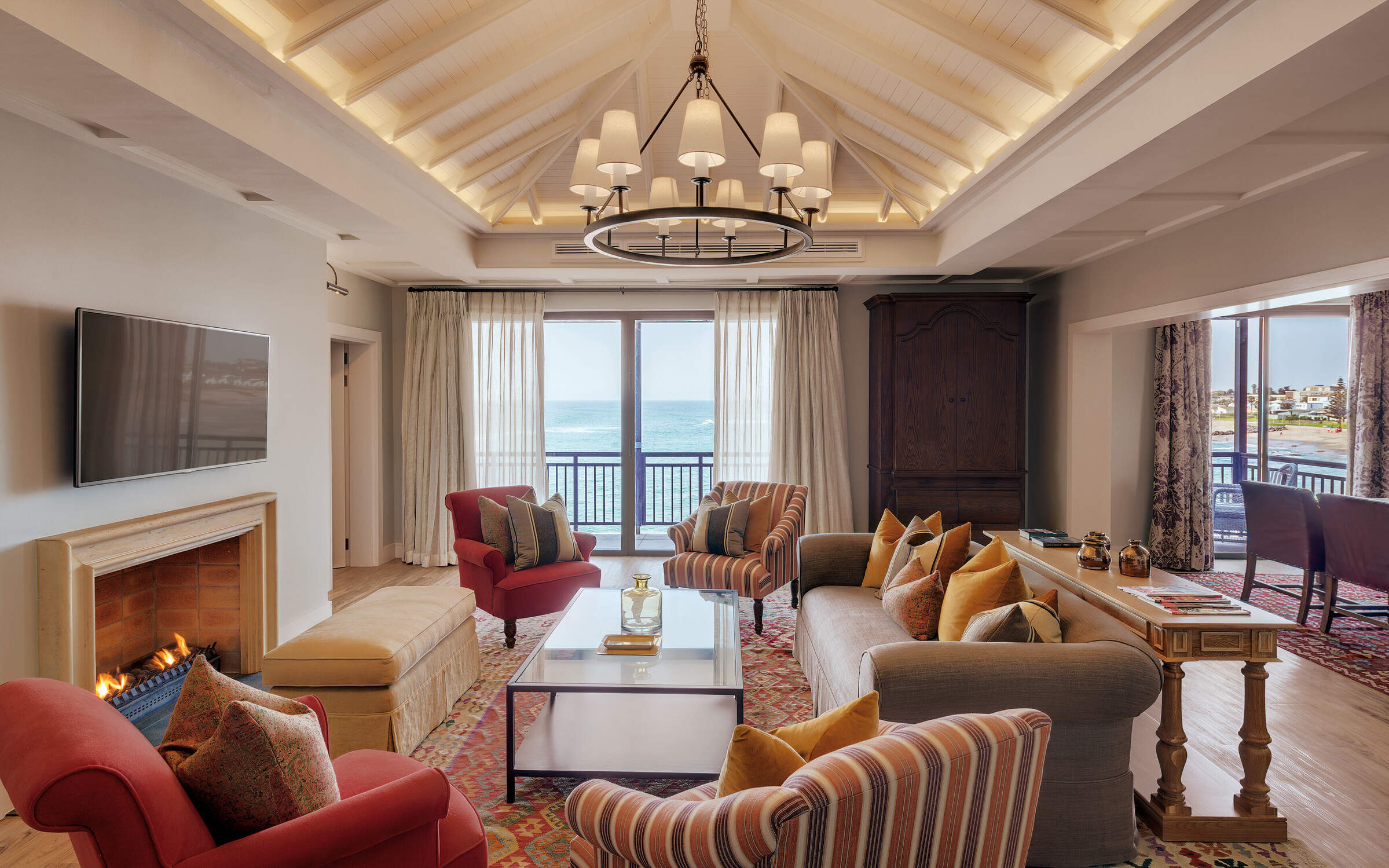 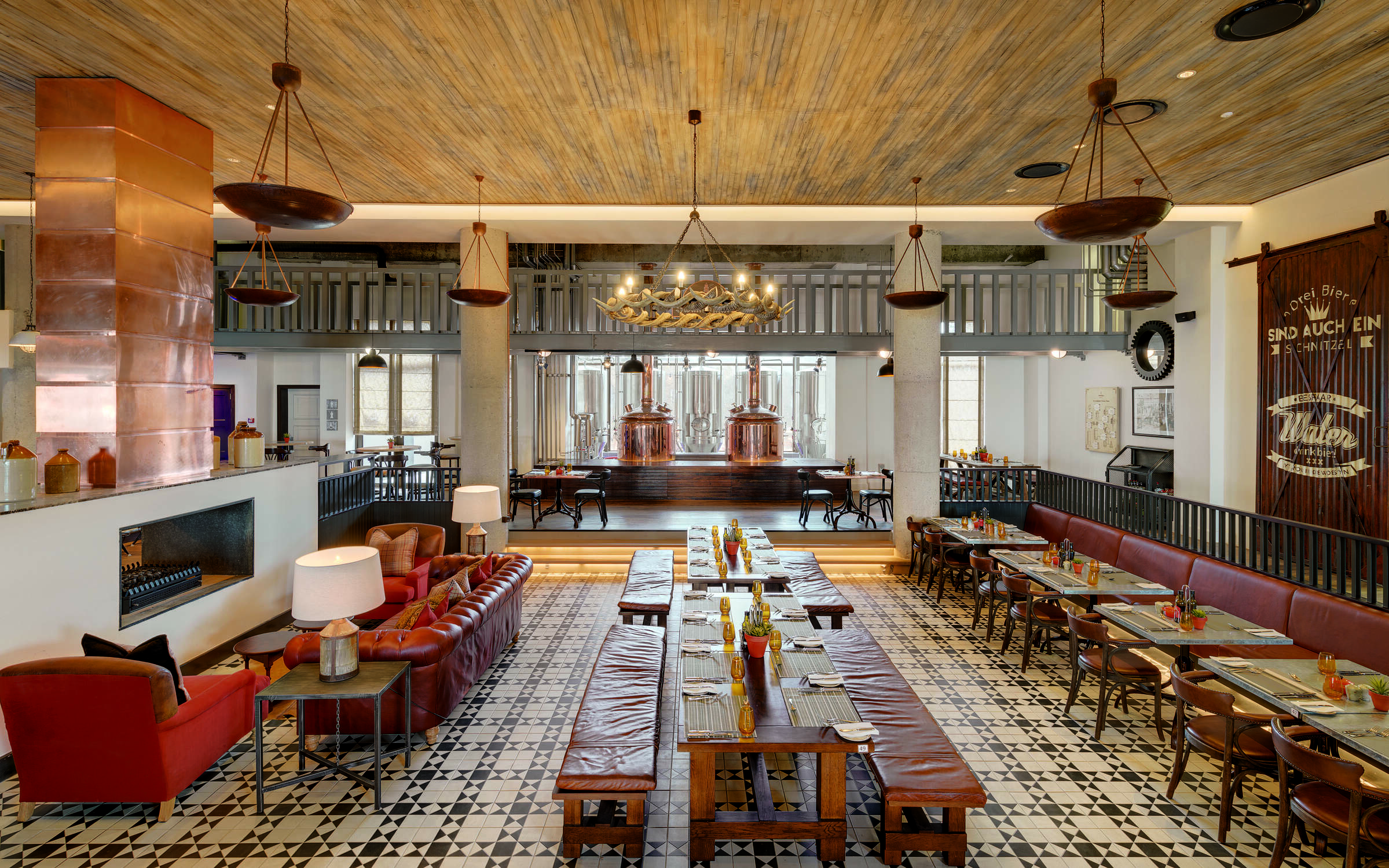 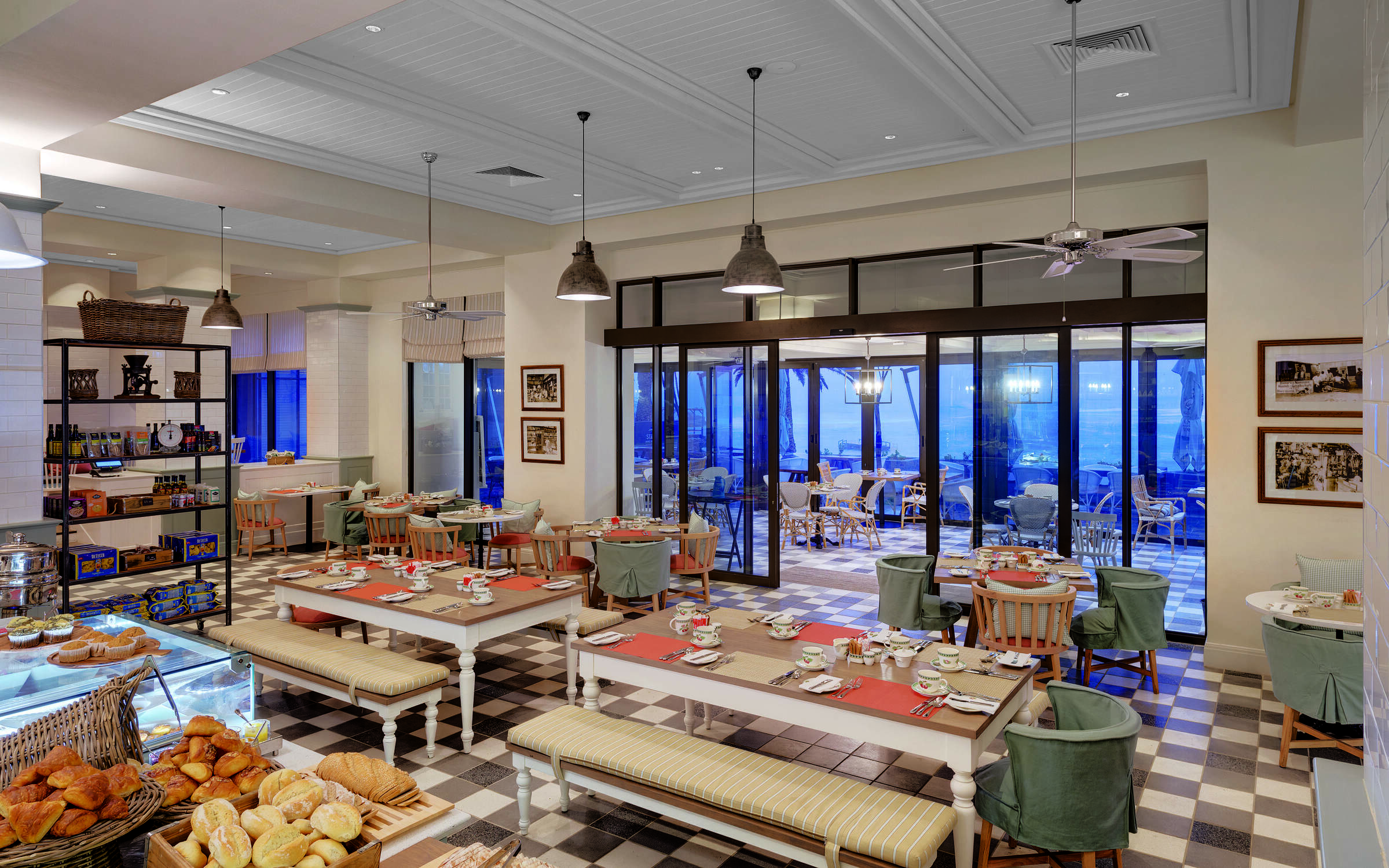 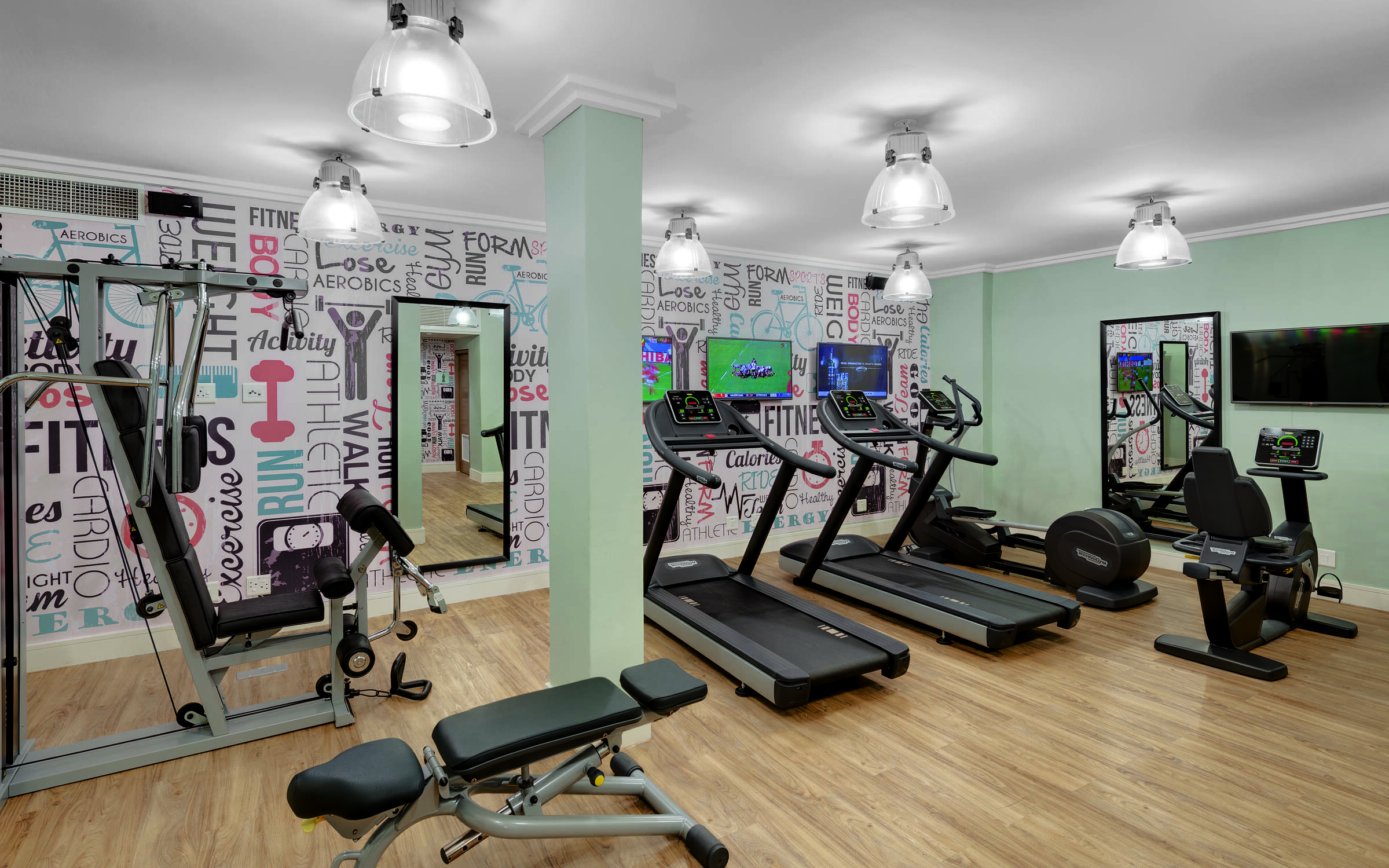 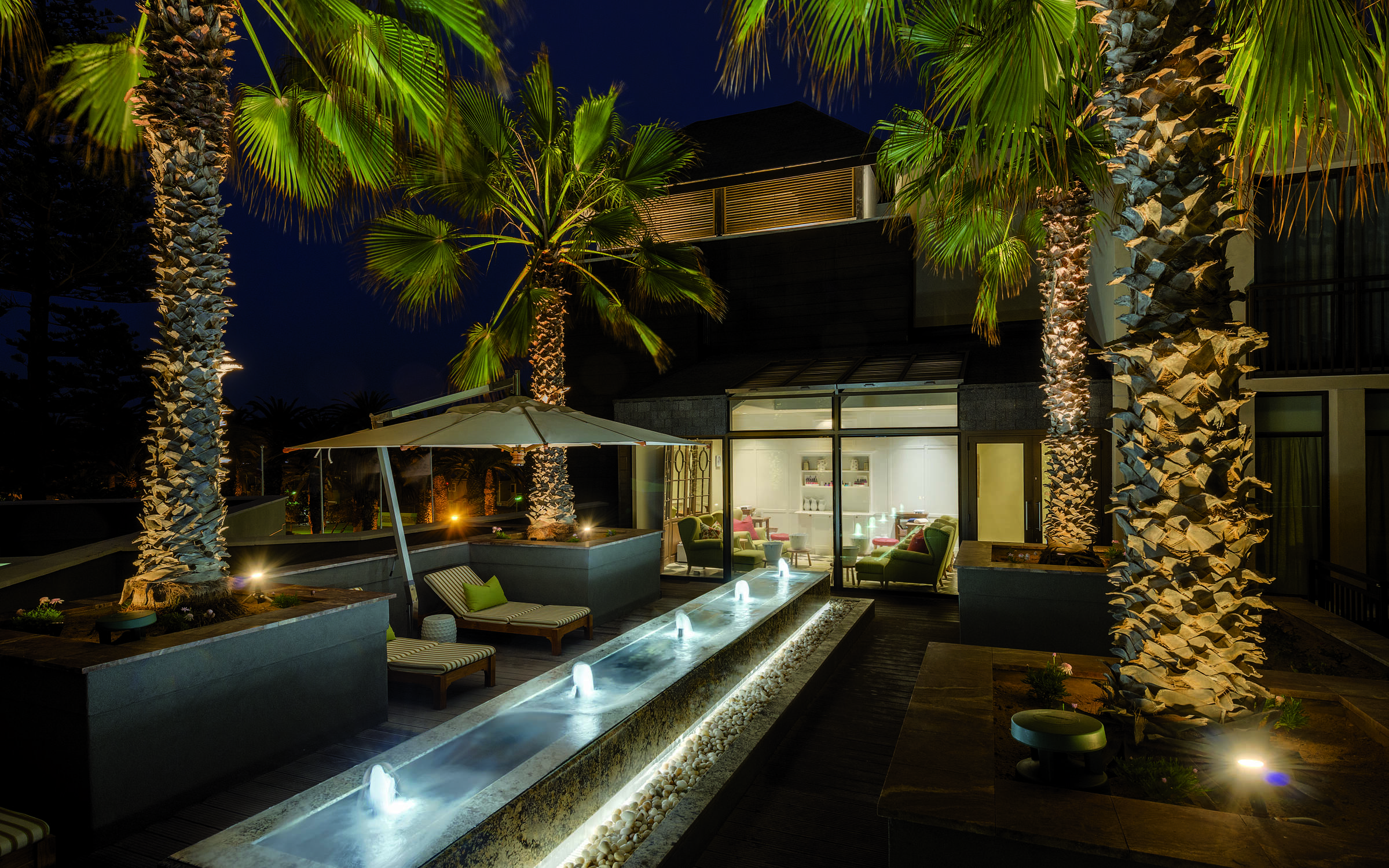 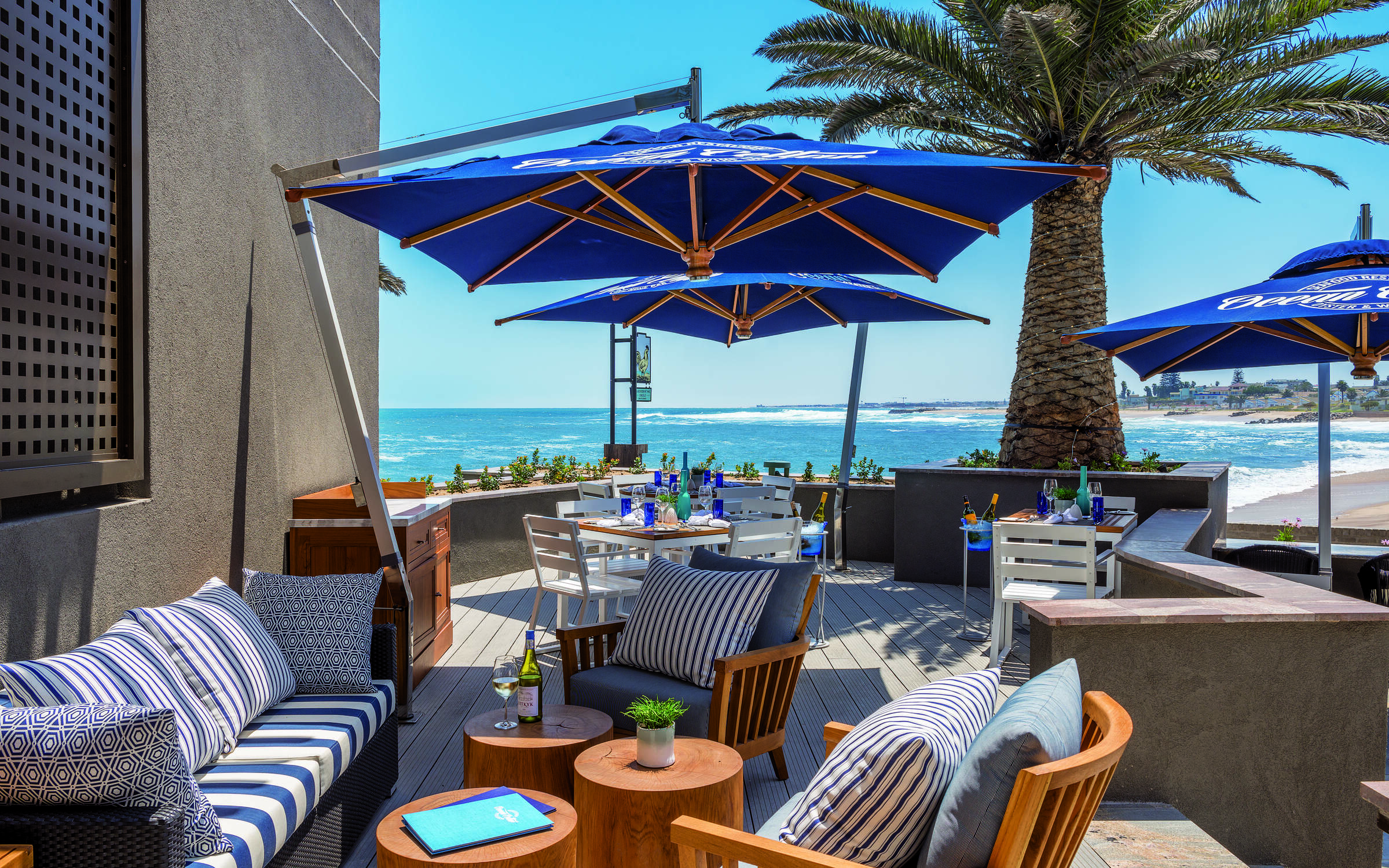 The Strand is an exciting new development located on Swakopmund's historic 'Mole'.

Built on the site of the old Strand Hotel, and opened in 2015, it has the Atlantic Ocean on three sides – giving uninterrupted sea views from some of the 125 rooms.

The 'Mole' is a sea wall built in 1899 by architect F W Ortloff. It was originally intended to enhance Swakopmund's struggling harbour by providing large cargo ships with a place to moor. Unfortunately, due to long-shore drift, the harbour entrance was blocked by a sandbar within five years of its construction, and soon a small but pleasant beach formed.

On a sunny day, locals and tourists alike enjoy this strip of sand, now known as Palm Beach. If you're going to swim anywhere from Namibia's coast, it is probably one of the best places to do so, thanks to the protection offered by the Mole and the sandbar. Be aware, though, that the water is usually very cold – thanks to the Benguela Current that flows northwards up this coast from the Antarctic.

The Strand Hotel is well placed to take advantage of this setting, with superb views from some of its 125 rooms. These come in a variety of guises: Standard Rooms, Luxury Rooms, Junior Suites, Luxury Suites and a Presidential Suite. All feature an en-suite bathroom, tea and coffee station, minibar, LCD satellite TV, safe, free WiFi, telephone and air conditioning.

Both rooms and suites are smartly decorated without feeling too sterile, their soft duck-egg blue walls complemented by soft furnishings in earthy reds and browns. Black-and-white photos or paintings of times gone by in Swakopmund adorn the walls, and chunky metal light fittings add a nautical tone.

The main foyer at the Strand Hotel is bright and airy, with a large, glass wall giving interrupted views of the Atlantic, and a number of comfortable sofas and seating areas. The hotel also has a choice of four restaurants offering a varied choice of food and atmosphere:

For those seeking to relax (or work out!) after a day packed with activities the Strand has its own gym, and a spa that includes steam rooms, a couples' therapy room, a roof-top garden terrace and outdoor therapy suite with fireplace.

Further afield, Swakopmund and Walvis Bay offer plenty of activities, which can be booked via the Strand’s Activity and Adventure Travel Office. (NB: If you intend to try quadbikint, it's essential that you read the Quadbike warning in the 'Health & Safety' section below for our comments on insurance issues regarding this activity.)

Although a significantly larger offering than most of the accommodation we recommend in Swakopmund, the Strand offers a very modern and comfortable stay in a great location. ‘It also benefits from its own four restaurants, and is well placed for other local eateries, so you don’t have to travel for lunch or an evening meal.

Location
Swakopmund & Walvis Bay, Namibia
Ideal length of stay
Most visitors stay in Swakopmund for 2–3 nights, as part of a trip around Namibia, although there are enough activities in the area to keep you busy for much longer.
Directions
Swakopmund is around four hours west of Windhoek and is accessible on tarred roads from the capital city.
Accessible by
Self-drive or Fly-and-Transfer

Usual board basis
Bed & Breakfast
Food quality
With its range of restaurants, the Strand Hotel offers plenty of choice, and there are also lots of other restaurants within easy walking distance.

When we stayed in the hotel for two nights in 2018 we did sample a couple of the restaurants. The sushi at Ocean Cellar restaurant was a particular favourite, also the large selection of steaks and meat options at the Brewer & Butcher.

Wellbeing
The Strand Hotel is one of the largest and most luxurious in Swakopmund. With facilities that include a gym and a spa, it is perfect for keeping fit or for a relaxing break on your holiday to Namibia.
See ideas for Wellbeing
Luxury
Any list of luxury hotels in Swakopmund would be short, but most would start with ‘The Strand’. This ocean-front hotel has the best location in town, plus smart, very comfortable rooms; a very good seafood restaurant; and a rooftop spa complete with garden and outdoor therapy suite.
See ideas for Luxury

Attitude towards children
Children of all ages may stay at the Strand.
Property’s age restrictions
here are no age restrictions for children here.
Special activities & services
None
Equipment
Cots are available for younger children.

Two of the Standard Rooms can accommodate up to two adults and two children on a sleeper couch, and all have space for two adults and a child in a cot.

The Luxury Rooms can accommodate up to two adults and two children of 15 years or younger.
Generally recommended for children
The Strand has more facilities for younger children than some of the smaller guesthouses in Swakopmund such as the ability to add cots to the rooms and high chairs at meal time. It is also well placed for the beach and other seaside amenities and attractions.
Notes
Due to the size of the hotel and its proximity to the ocean, younger children would require constant supervision.

Communications
Every room has a phone and free WiFi.
TV & radio
There is a flat screen satellite TV in every bedroom.
Water supply
Mains

An eco-leader in the Namibian hospitality industry

The Strand Hotel Swakopmund stands out as a leader in the Namibian hospitality industry. Its achievements and innovative design were awarded the Best Hotel Development in the 2017 Africa Property Investment (API) Awards.

Completely rebuilt in 2015, various opinions were consulted in its new construction, including those of many members of the public and the Swakopmund Aesthetics Committee. The consultation and planning process resulted in a design which suits every need and expectation.

WSP, one of the largest multi-disciplinary engineering consultancies in Africa was commissioned with designing a sustainable gas/plumbing and drainage system, as well as efficient air-conditioning and mechanical ventilation for the hotel. The new equipment was carefully selected to comply with sustainable development standards and was designed to have a life span of between 20- and 25-years, without major refurbishment during this period.

The Strand Hotel also benefits from a unique aesthetic which combines a functional and contemporary approach with indigenous art, thus meeting the requirements of the local heritage council.

Malarial protection recommended
No
Medical care
There are a number of doctors and hospitals in Swakopmund.

Quadbike warning: Quadbiking is sometimes available as an activitiy in this area. As with any potentially dangerous activity, it's vital that you take responsibility for ensuring that you have adequate travel insurance prior to getting involved. Be aware that some insurances cover quadbike activities only for bikes with lower engine ratings; check such clauses particularly carefully before you get on a bike.

Dangerous animals
Low Risk
Security measures
There are security guards on site at all times.
Fire safety
There are fire extinguishers in all rooms and in the main areas.

Disabled access
In Place
Laundry facilities
Laundry is available at an extra cost.
Money
All rooms have an electronic safe. There is no currency exchange available, but there are several banks and ATMs in Swakopmund.
Accepted payment on location
Travellers can pay with Visa and Mastercard, or in cash using Namibian dollars or South African rand.

Other lodges in Swakopmund & Walvis Bay

Cornerstone Guesthouse is a small friendly B&B in a peaceful residential area. It's just a short walk from Swkopmund's waterfront & amenities.

Not your typical guesthouse, The Stiltz occupies a glorious location over the Swakop River on the edge of Swakopmund.

Villa Margherita is a beautifully renovated B&B in the heart of Swakopmund, with comfortable, well-appointed rooms, and friendly and attentive staff.

Right on the sea front, Beach Lodge offers good standard accommodation and its own restaurant, 15 minutes’ drive from Swakopmund.

Lagoon Lodge is a quirky little guesthouse located right on the edge of Walvis Bay Lagoon, a good spot for watching the flamingoes that frequent the area.

In a quiet residential location, Brigadoon is conveniently located for the Swakopmund waterfront and amenities.

Swakopmund Guesthouse is a family-run B&B, boasting comfortable and high-quality rooms with a maritime touch.

Friendly Sandfields guesthouse is a cosy and inviting place to stay just north of Swakopmund town centre, and is particularly suitable for families with children.

The Delight is a colourful modern hotel within a short walk of the Swakopmund waterfront and main attractions.

With a very central location in Swakopmund, the traditional Hansa Hotel is reliably good, though it is quite formal.

Secret Garden Guesthouse is well located in the centre of Swakopmund not far from the sea. With a seaside feel, it has its own small restaurant and bar.

Just north of Swakopmund, the delightful Sea Breeze Guesthouse is bright and well-looked after with welcoming and helpful owners.

Organic Square is a modern guesthouse across two properties in the centre of Swakopmund.

Not your typical Swakopmund guesthouse, Desert Breeze occupies a glorious location overlooking the Swakop River and the desert beyond.

Pelican Point Lodge sits on a remote peninsula offering panoramic views of the ocean and is only accessible by 4WD or boat.

In a quiet residential area just north of the town centre, Intermezzo Guesthouse is a comfortable and bright place to stay while in Swakopmund.

Hotel Zum Kaiser (formerly Swakopmund Boutique Hotel) is fairly large by Swakopmund standards, but has a good location in the centre of town, near to the beach.

The Namib Guesthouse is a small, modern B&B, set in Swakopmund's peaceful Kramersdorf area. It's just a short walk from the coast and many amenities.