The conservancies are exclusive to their guests...

Most of the camp staff come from the region’s Maasai communities.

You will often see no other vehicles around you...

With ideas from Expert Africa for tailor-made safaris.

The private conservancies on Maasai land around the edge of the Maasai Mara National Reserve are a relatively recent phenomenon and have become hugely successful in terms of wildlife conservation, community engagement and visitor experience. These are areas where, unlike the reserve itself, visitor numbers are strictly limited; there are no more than 12 tents per camp; and there's a minimum of 3km² of wildlife-viewing conservancy land per tent. Most of the time, you will have the bush and the animals to yourself and, unlike inside the reserve, you can do night game drives and bush walks.

These areas feel to us like the future of wildlife conservation, and the big mammals now flooding out of the reserve into the wider dispersal area – including elephants, large prides of lions and other big cats, giraffe and a host of plains grazers – seem instinctively to agree. 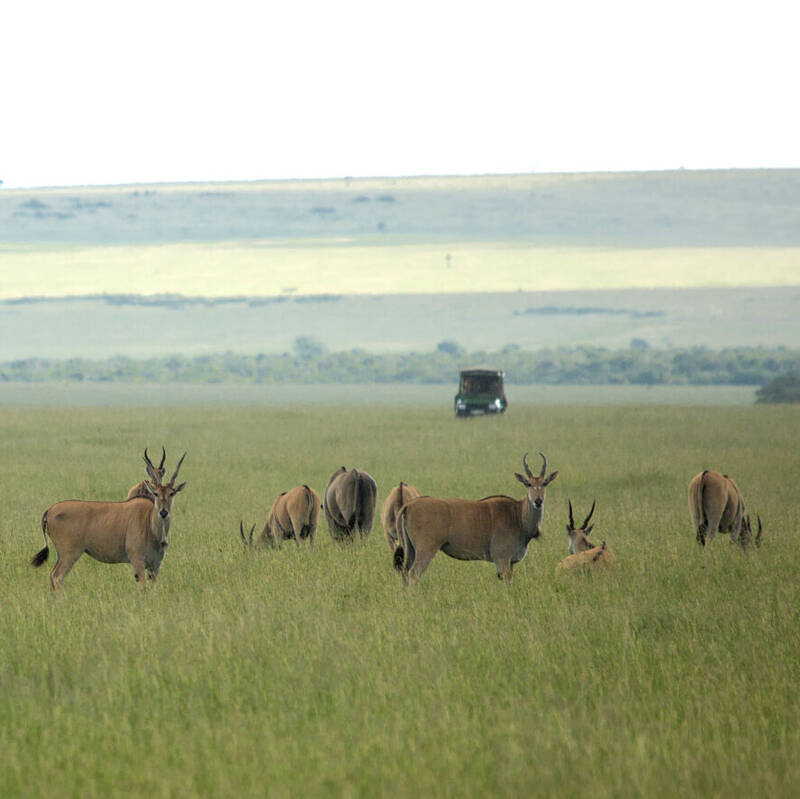 After a unique start in Nairobi National Park, classic, luxurious camps combine for a high-end and exclusive safari in fantastic wildlife destinations.

Two luxurious camps provide relatively quiet game-viewing within Laikipia and the Mara ecosystem. Situated on private conservancies, both Lewa Wilderness and Naboisho offer the chance to sight all of the "Big 5" and to enjoy a range of safari activities.

Enjoy a range of activities in the remote wilderness of northern Kenya before exploring the wildlife-rich plains of the Mara ecosystem. Private vehicles and guides heighten the personalisation of this highly immersive safari.

Experience Amboseli, the Maasai Mara ecosystem and Laikipia during this economically priced safari. Two simple camps offer adventure before a stopover in Nairobi and a final stay in the charming, wildlife-rich Il Ngwesi Eco-Lodge.

Different wildlife, contrasting camps and a whole host of activities, this is a safari for those wanting to get out and about and not just sit in a vehicle.

Discover two of Kenya’s quieter wildlife havens with visits to Meru National Park and Mara North Conservancy. Top-quality sister camps provide considerable comfort and a range of activities by which to explore the game-rich surroundings.

Fantastic guiding from intimate, well-run mid-range tented camps, in superb conservancy locations: this safari is all about making the most of the incredible wildlife in Laikipia and the Maasai Mara.

Just one example of a possible itinerary for keen walkers, this safari enables you to experience the sounds and sights of the bush, and its wildlife, in an unusually direct way.

Explore Laikipia and the Maasai Mara ecosystem with stays in the Ol Pejeta and Naboisho conservancies. Two smart yet authentically rustic bush camps provide a traditional safari experience, offering a high standard of guiding and excellent level of care.

Browse other experiences across Kenya

Where to stay in Mara Conservancies

Our suggestions for safari camps in Maasai Mara Conservancies

Encounter Mara is located in the private Naboisho Conservancy – a game-rich area of the Mara ecosystem – and offers a contemporary take on the traditional, low-impact luxury safari camp.

Leleshwa was a delightful, boutique safari camp on the picturesque banks of a tributary of the Talek, with an extensive, little visited game area on its doorstep.

Small and intimate, Offbeat Mara is set in a valley above the (often dry) Olare Orok River within the Mara North Conservancy.