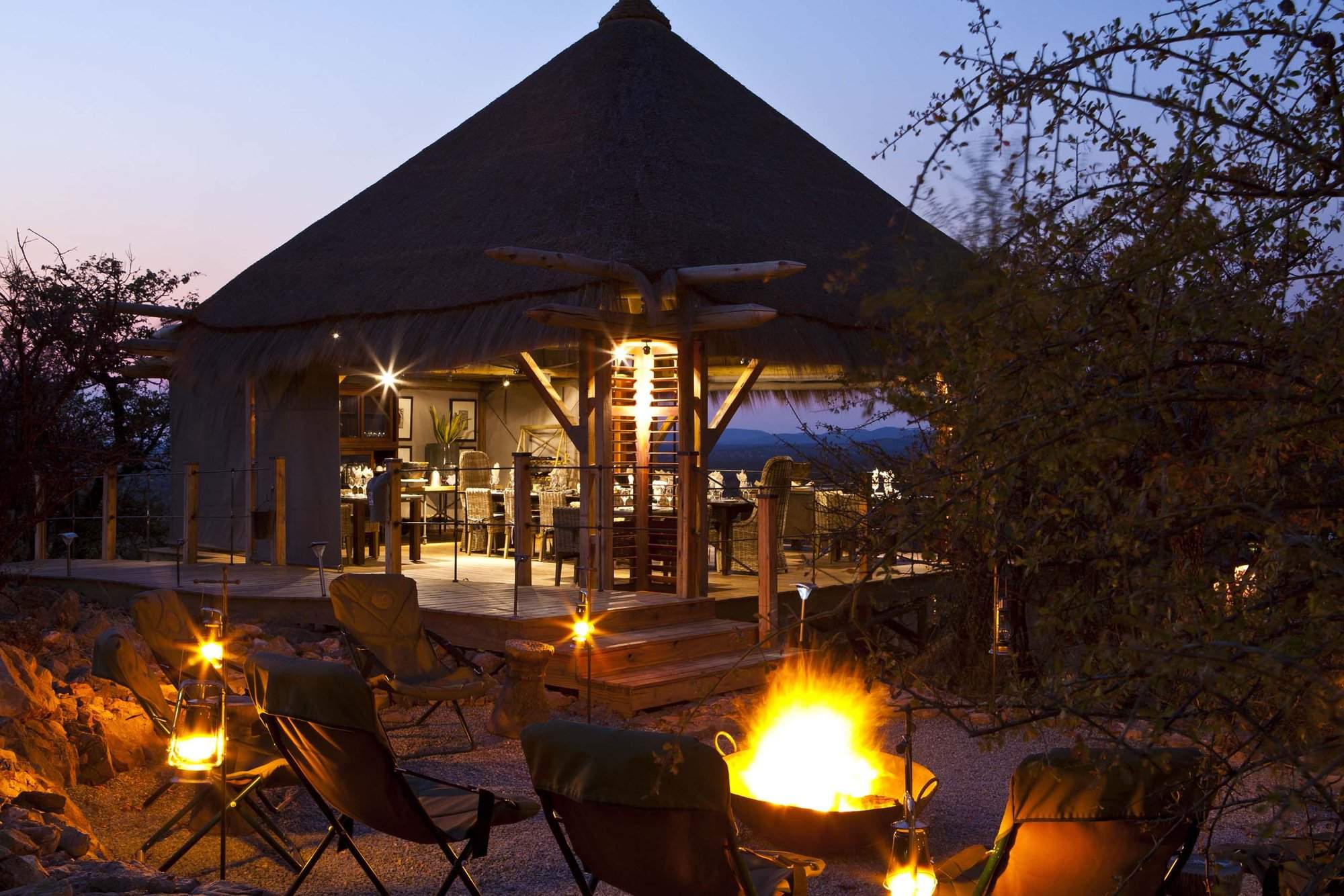 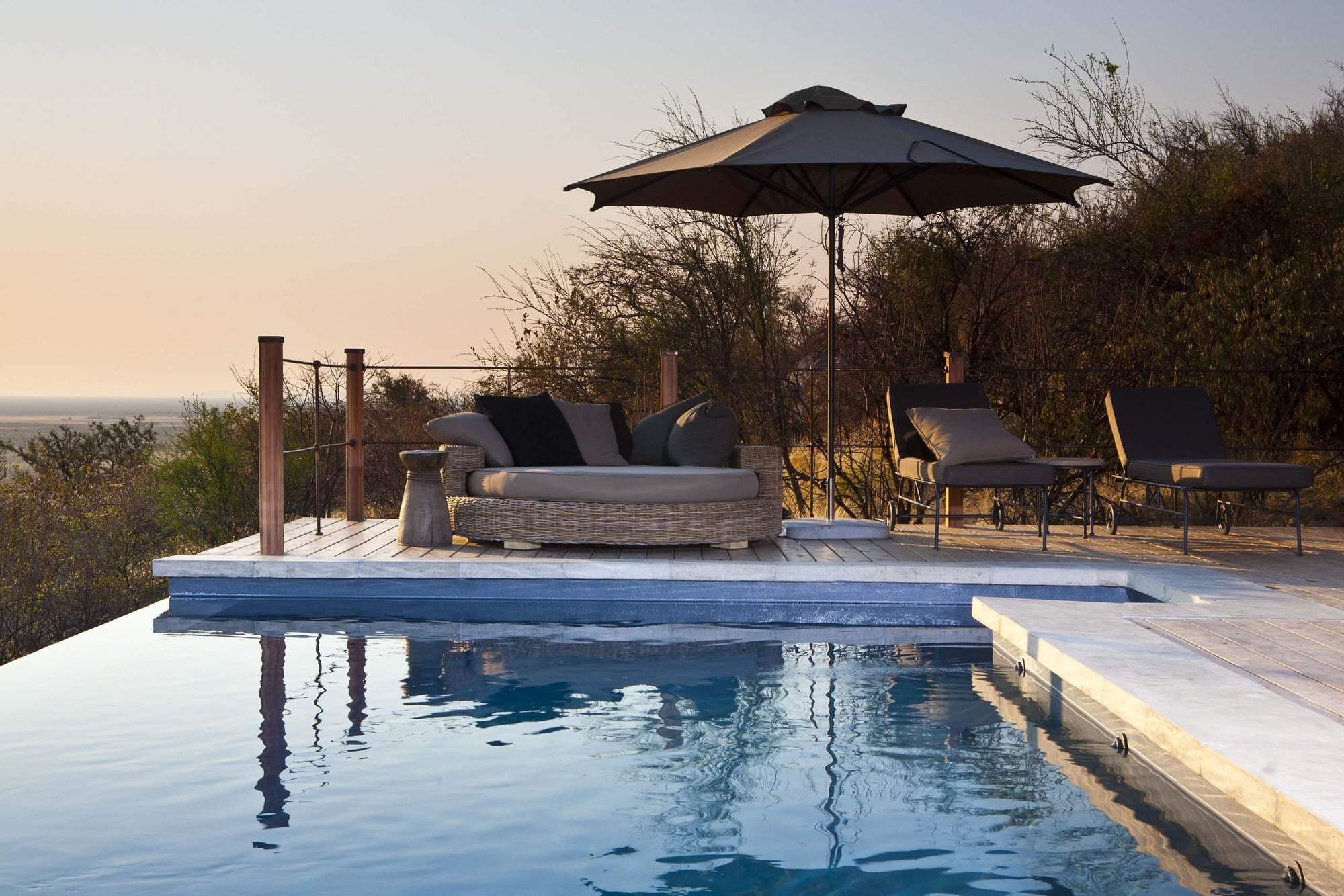 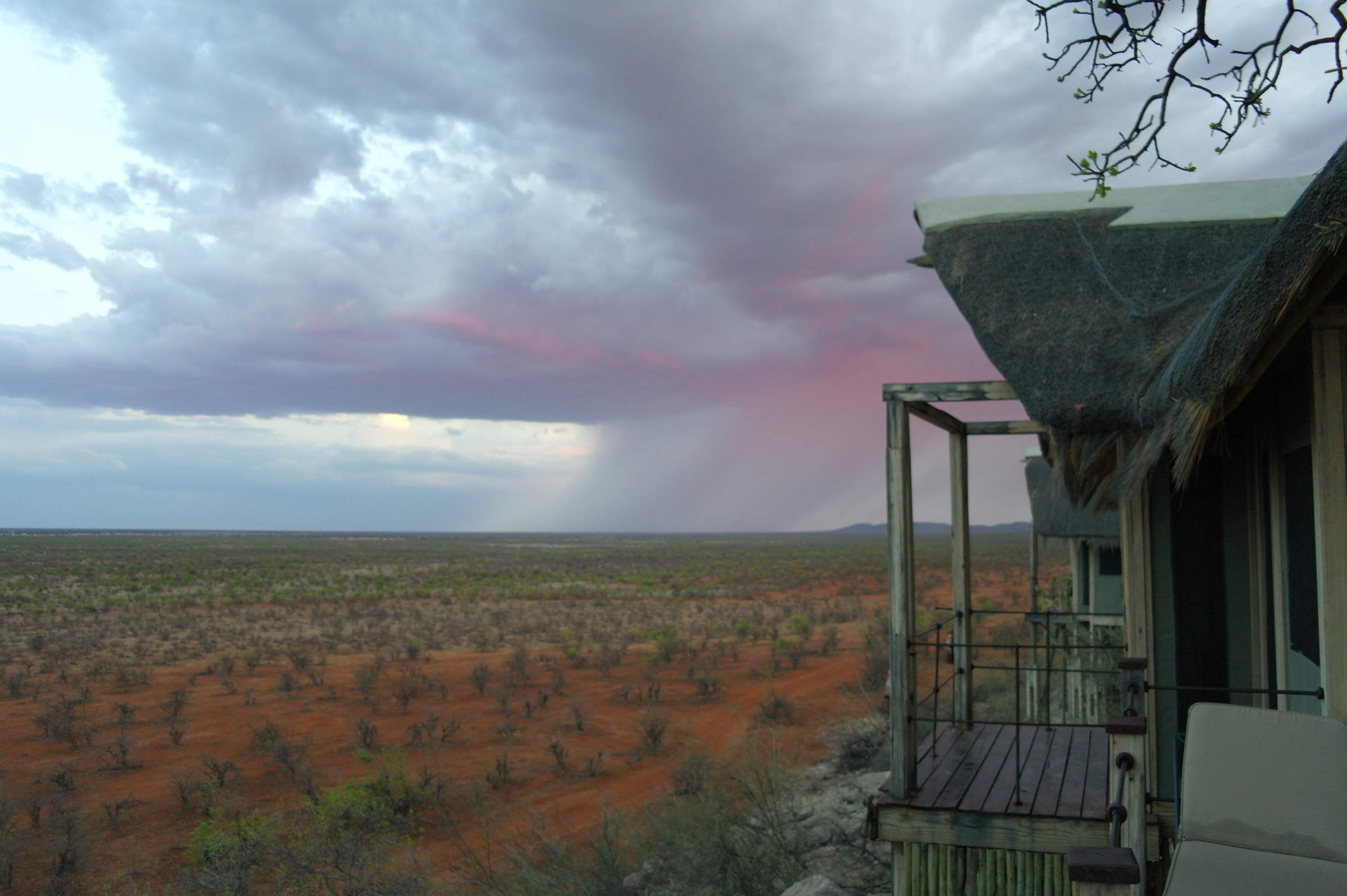 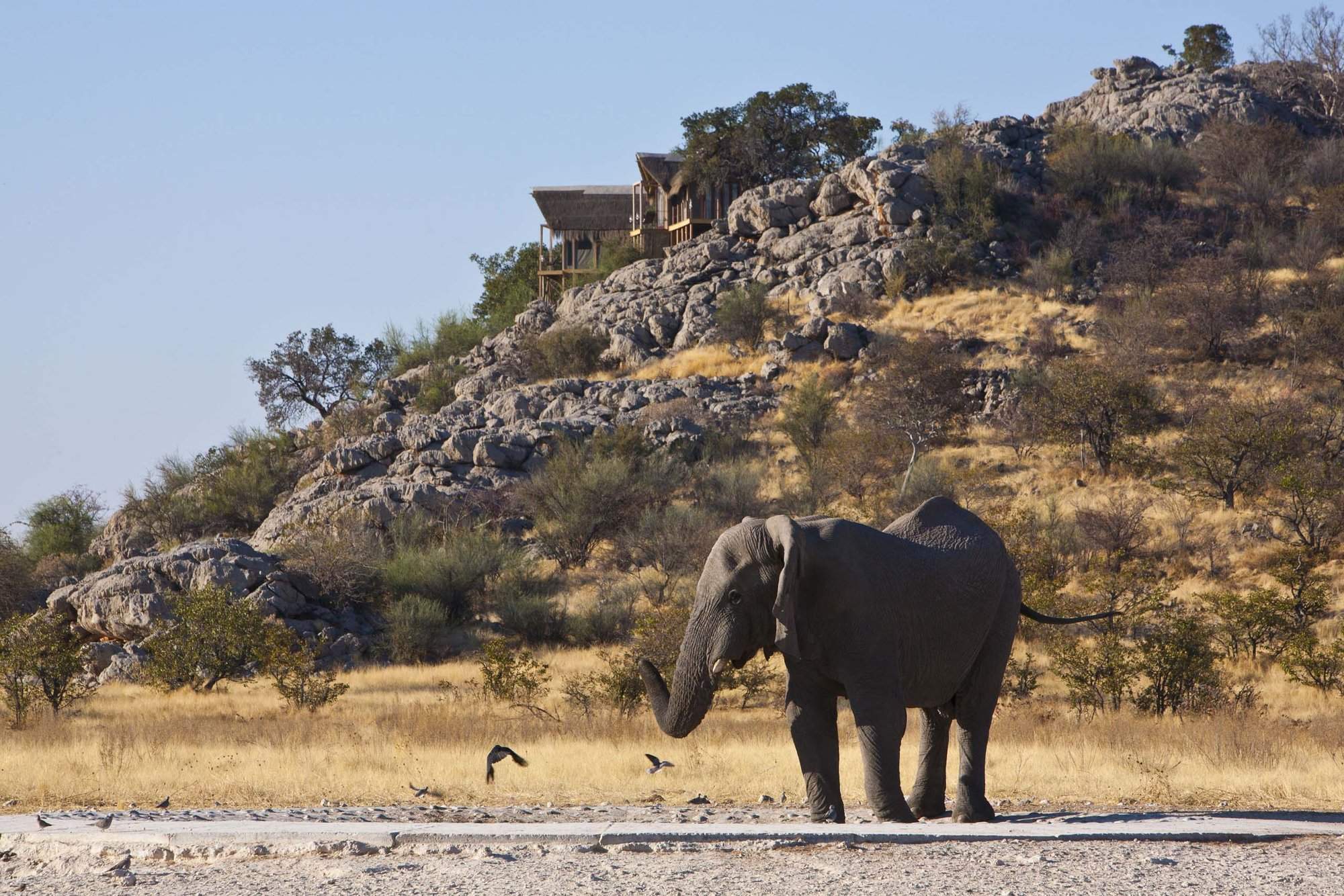 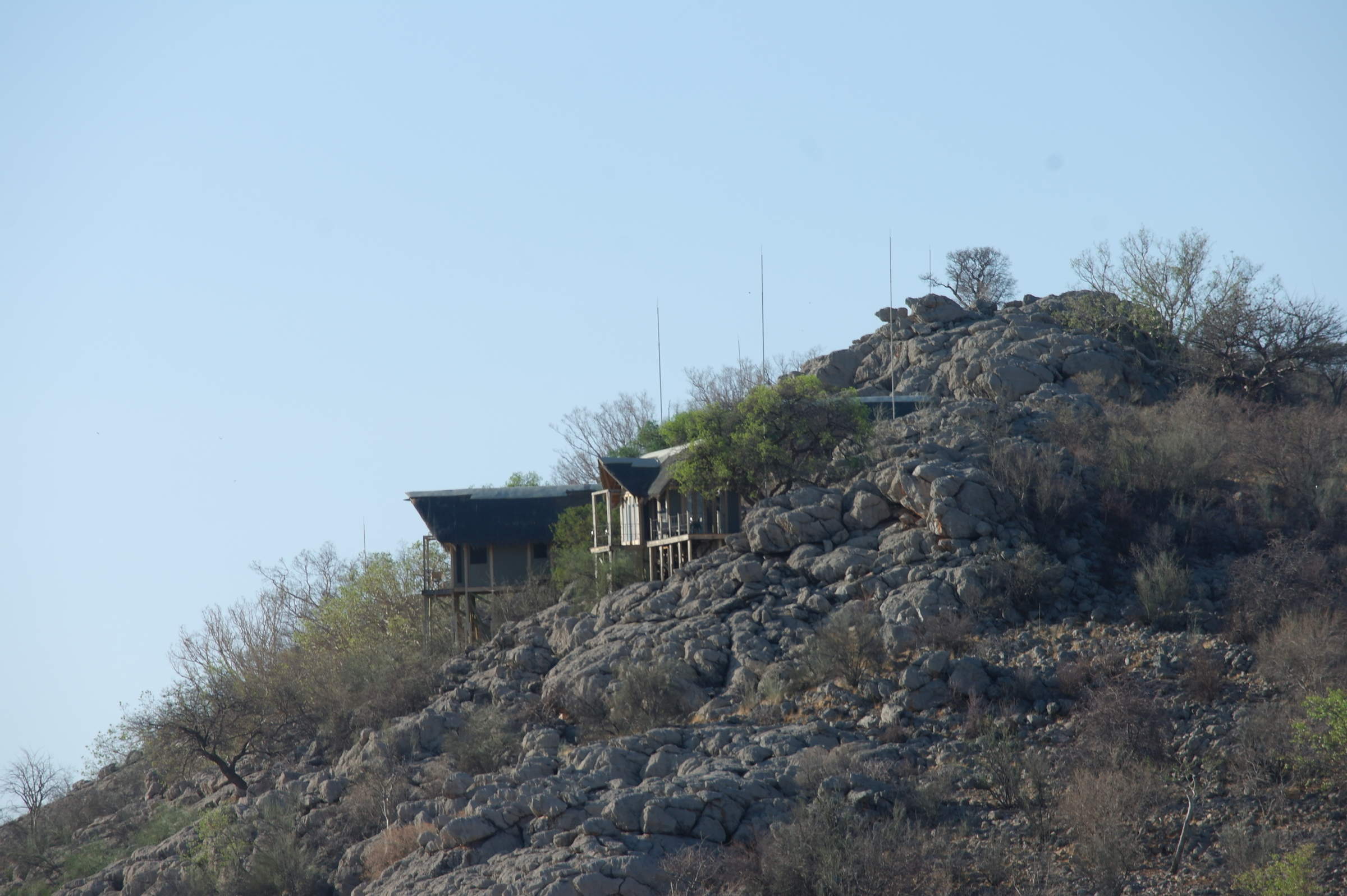 93 independent comments and wildlife information from our travellers who have visited Dolomite Camp and kindly agreed to share their thoughts. They do not necessarily represent the views of Expert Africa

2 nights Arrived 13 Aug 2014
"We were disappointed on arrival to have to hike up the steep hill to reception in the heat of the afternoon but once there we were greeted with cool drinks, cold towels and cheery helpful staff. We knew in advance that we would have to change rooms due to NWR having made errors with our booking; the reception staff assured us that they would get our luggage moved for us the next day and, indeed, as we set off for breakfast the next morning the porter/buggy driver confirmed that he would sort the transfer. We were allocated a waterhole view room for the first night and then moved to the best room in the camp (13) for the second night. The views from both rooms were great with the second having the bonus of a large deck from which we could watch the waterhole in the early morning. The surrounding rocks were home to a large group of dassies whose antics were highly amusing. They seemed as fascinated with us as we were with them!

Both rooms were well equipped (even a hairdryer) though the first was a little small. Food was very good though sauces lacked imagination (3 meats all came with the same sauce served on the side). It might be helpful to tell guests which dining room their room was allocated on check in – you do not have a free choice of which to use. There was a reasonable wine list but virtually none was in stock.

Throughout our stay we couldn’t fault the friendly, helpful staff (the buggy driver even ran to fetch our key from reception to save us having to go up and down the steps). This was in marked contrast to our previous stays at NWR camps.

Dolomite would be very difficult for anyone with walking difficulties as even the closest room to the main facilities is up a steep and uneven slope. To get to the furthest rooms took a good 10 to 15 minutes which, in the heat of the afternoon, along uneven, undulating paths was something of a pain.
There was good game at the waterholes both morning and afternoon though it is a shame that so many of the waterholes at this end of Etosha are still closed off. If these were opened up we would very happily stay for three nights next time and hope for room 13 despite the hike to get there!

1 night Arrived 7 Aug 2014
"A stunning and wonderful camp. Wish we had stayed longer than one night.
Great service, helpful staff and a more intimate atmosphere than Doro Nawas.
Views from small verandha across the savannah was amazing. Seeing elephants and zebra wandering around just metres below us was unbeatable.
Food very good and they supplied a great packed lunch at a very reasonable cost when we left to travel to next camp." See all these reviews: 15n in Namibia
Experience Report
Overall Rating:
Excellent
Location:
Excellent
Service:
Excellent
Rooms:
Excellent
Food:
Excellent
R Family
San Diego

The rooms are amazing - wood, glass, thatch and canvas structures on stilts clinging to the side of the hill. We had a plunge pool on the deck, a separate balcony with views across the plain, a very comfortable bed and clean shower / toilet areas. The walk up the hill to the camp and to the rooms is hard going though - so guests with limited mobility will need to rely on the availability of the electric carts (these were not offered to us on arrival or on departure). The food was again very good - limited menu but very good quality.

The reason we have only rated this as 'good' is that the staff service was appalling. Very friendly and pleasant, but they were invisible at times and pretty ineffective the rest of the time. The person who escorted us to our room in the dark did not provide any light for us to get down the steps to the room, they literally just dropped us and left; on check out there were no reception staff - one poor staff member trying to take guests out on a game drive ended up taking our money for our bill and telling us he would sort it out..... At the same time as trying to get 8 waiver forms signed and get on his way for the game drive.

There are also a few minor maintenance issues that need to be addressed before they get worse (big gaps under all of the doors in the rooms letting big drafts in on all sides, the start of wood rot on some of the shower fittings, sliding doors that come off of their runners). This is a shame as it could - and should- be the jewel in the crown in the park. We would not have missed it and would go back, it is good, just have limited expectations of the staff!" See all these reviews: 12n in Namibia
Experience Report
Overall Rating:
Good
Location:
Excellent
Service:
Average
Rooms:
Good
Food:
Good
Facilities:
Excellent
Mr R & Mrs E
Bucks

2 nights Arrived 14 Jun 2014
"Another camp with a long walk to reception - not a problem however.

Food was very good but the staff have a bit to learn regarding service which was slow. A couple of basic items ran out but there was no effort to bring in supplies ahead of schedule.

There was a leopard in the camp one night but we did not see it. There was also some lion activity rather close to our hut - again, heard but not seen.

1 night Arrived 14 Jun 2014
"Stunning location! Set high up on a hill in the previously restricted western reaches of Etosha NP, this camp was amazing. You unload your bags at the top then drive back down to park your car. It is then an almighty trek back up to your tented chalet, but the view makes the effort worthwhile. The staff carry your bags, which was a relief! The views over the plains are amazing.

There was a lovely refreshing swimming pool and bar area and despite it's remote location drinks were very reasonably priced. Dinner was not a buffet but a set menu and was fine. The beds were lovely and comfortable and surrounded by mosquito nets so there was no problem with bugs.

The only downside is that the view directly over the waterhole seems to be reserved for a select few exclusive chalets. If you are on the other side you cannot see the waterhole, and there was no viewing area. You would have to drive to the waterhole.

However, don't let that put you off as the surrounding views are stunning and you really can see for miles. Sunset was beautiful. I was told by a member of staff that they already have bookings for the next couple of years, and I can understand why! An amazing place to stay." See all these reviews: 25n in Namibia
Experience Report
Overall Rating:
Excellent
Location:
Excellent
Service:
Excellent
Rooms:
Excellent
Food:
Good
Facilities:
Excellent
Mr & Mrs G
N London

"Nice idea, shame about the lodge..."

1 night Arrived 20 May 2014
"This was the biggest disappointment of our trip.

We love Etosha, but unfortunately we can't recommend Dolomite Camp. The idea is good, but the execution is poor. There is a long and steep walk to most of the rooms, with no certainty of assistance carrying your bags.

1 night Arrived 16 Nov 2013
"The camp itself is beautifully designed and situated-public spaces, individual rooms and a really nice pool. We especially loved the rooms with balconies that were so private and peaceful.

The food in the dining rooms was good and staff , when we were there, pleasant. We left by taking the longer road out to the gate because there were water holes noted on our map. All but one of these was closed and we wished the we had known this before we chose this route. We did not take any of the drives." See all these reviews: 13n in Namibia
Experience Report
Overall Rating:
Excellent
Location:
Excellent
Service:
Good
Rooms:
Excellent
Food:
Average
Facilities:
Excellent
Showing 41-50 of 93
1...456...10
Previous Next
86%
93 reviews of Dolomite Camp by travellers since August 2007
Overall rating by our travellers
49
30
8
5
1
Filter by month