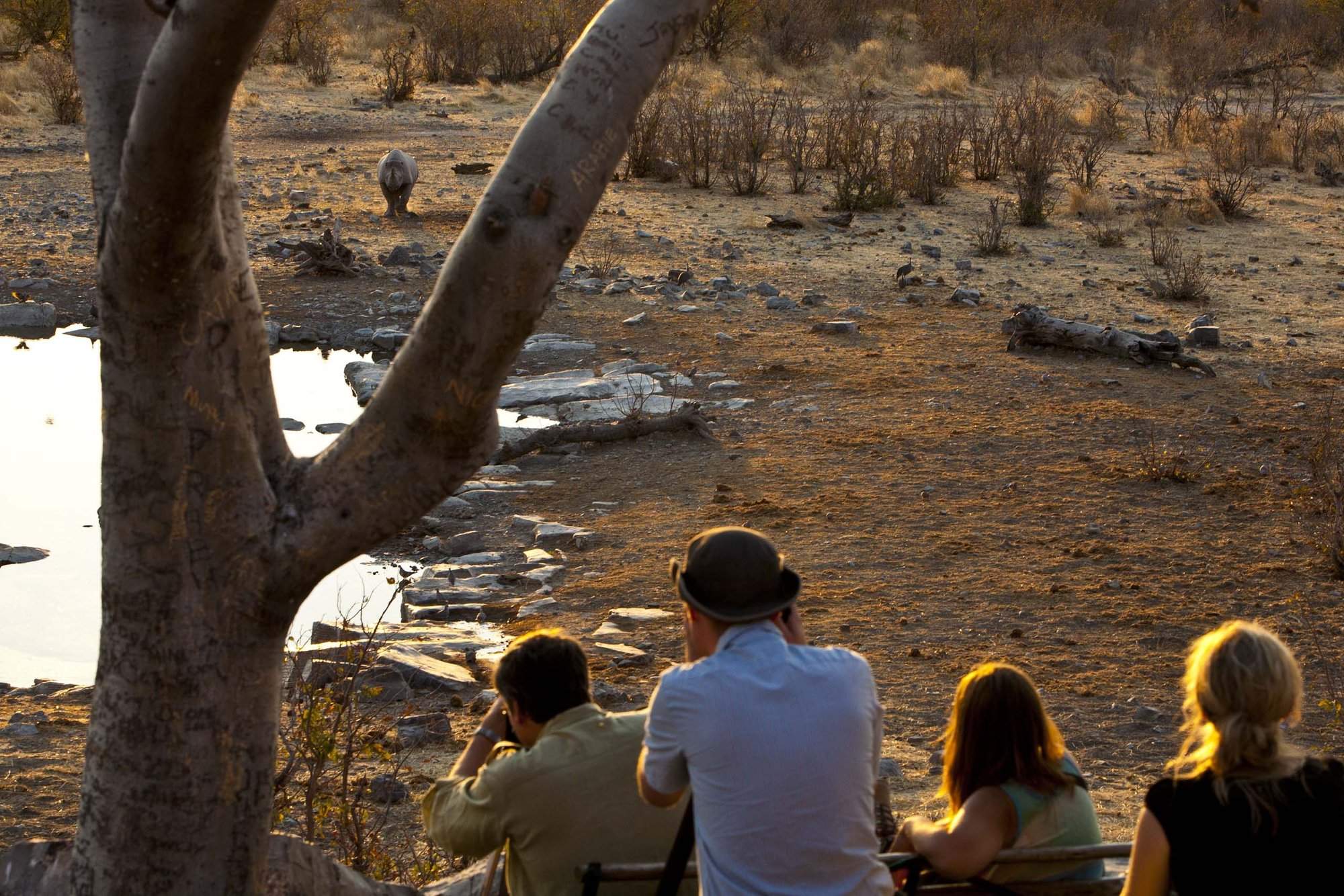 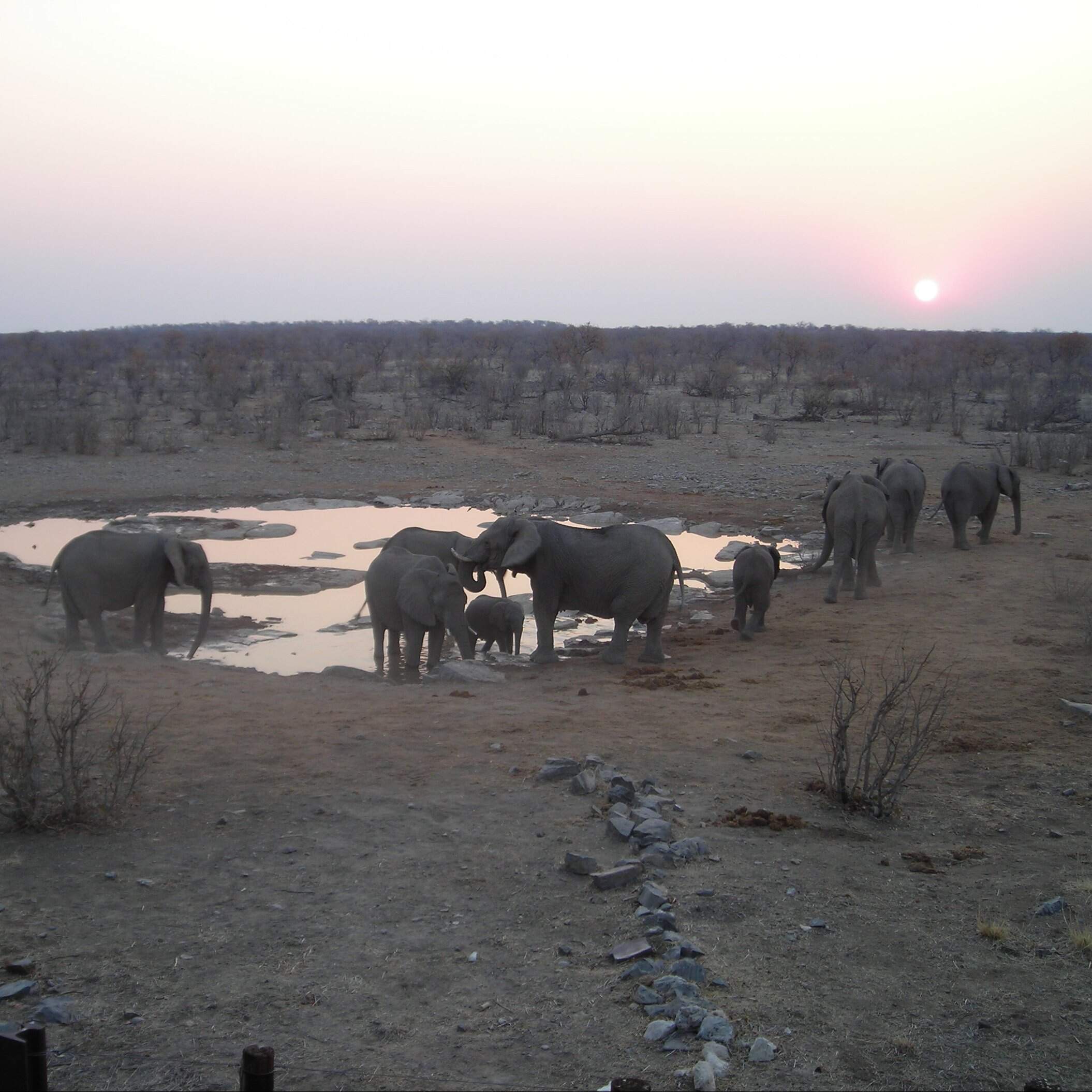 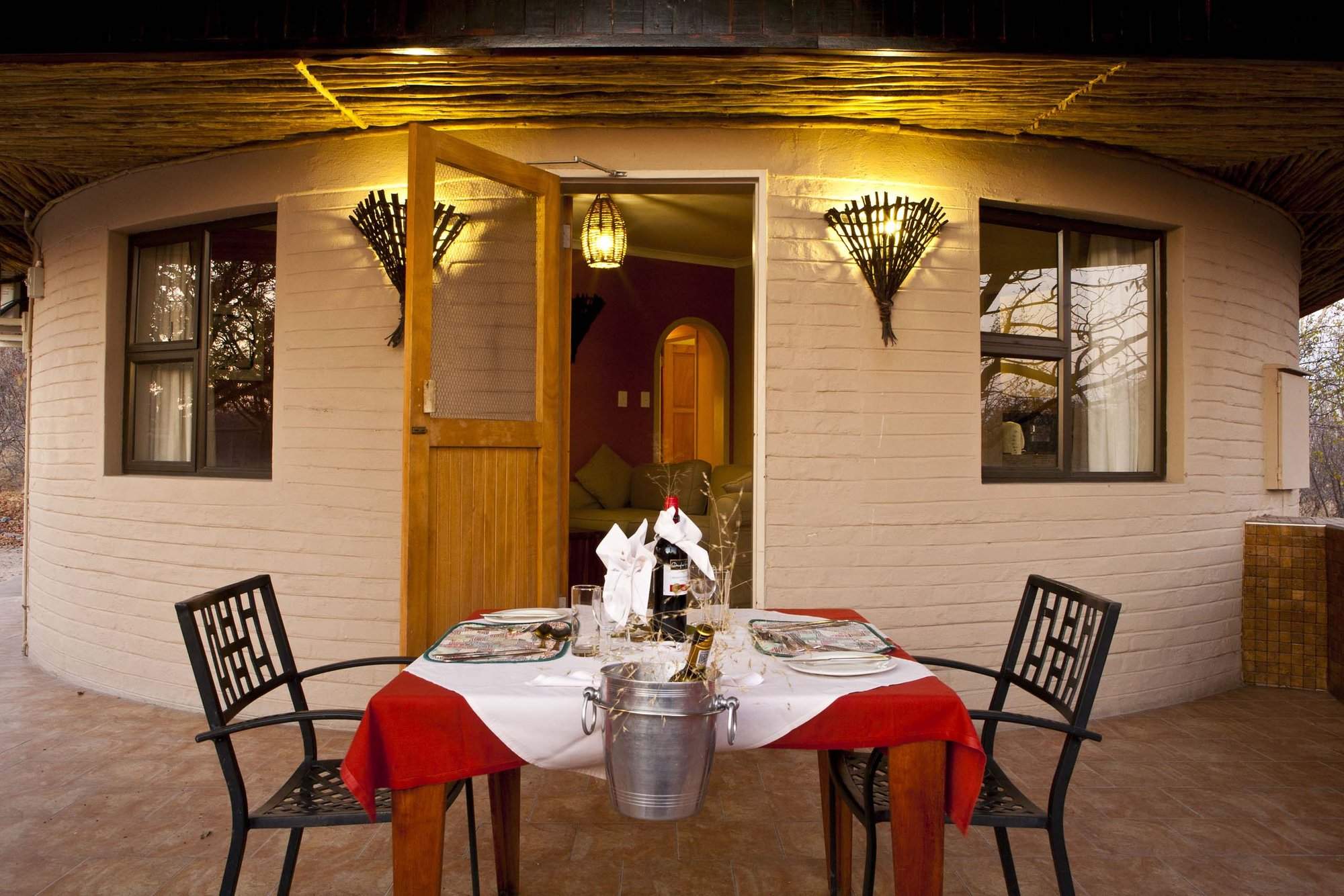 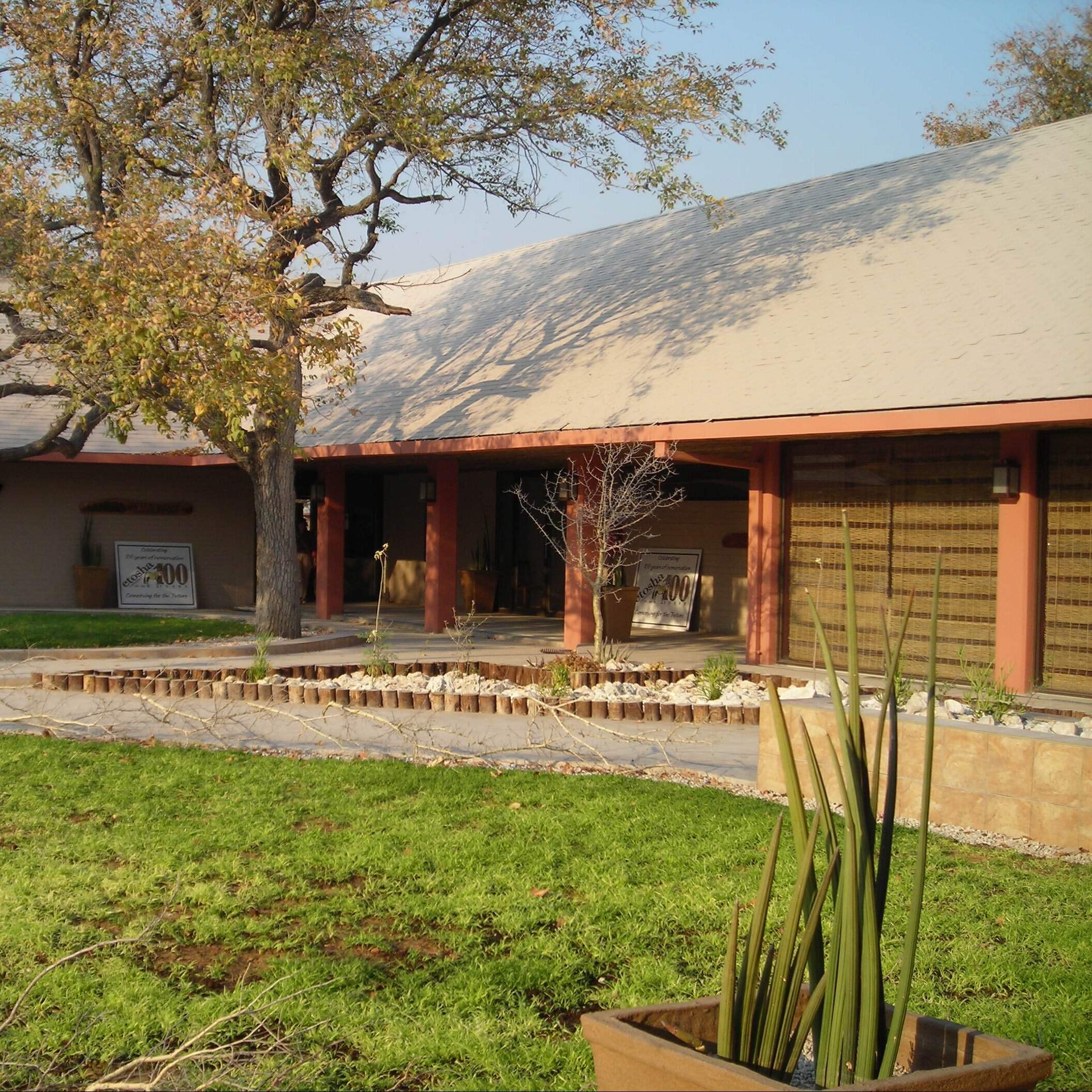 Strategically located alongside the middle of Etosha Pan in Etosha National Park, Halali is one of five govern...

... ment-run camps and lodges inside the park. It stands beside one of the very few hills in Etosha, with its own floodlit waterhole, and is the smallest and quietest of the original restcamps – although it's much larger than most camps in Namibia.

Like its sister restcamps inside the park, Okaukuejo and Namutoni, Halali in many ways resembles a small village. Along with its chalets and rooms, it has a restaurant, a big swimming pool, a shop and a fuel station – all linked by a small network of roads and footpaths.

As well as a popular camp site, there are 66 chalets and rooms here are split into five categories: two-bedroom family chalets, one- and two-bedroom bush chalets, double rooms, and honeymoon suites. All have air conditioning, lamps, a tea/coffee station and a mini-fridge (which is always empty on your arrival). The beds have mosquito nets above crisp white bedding and very comfortable pillows. In the bathrooms, you’ll find complimentary shampoo, soap, hand and body lotion, as well as soft towels.
The restaurant at Halali is big and open-plan with sliding doors on either side. The walls are covered with animal paintings, and tables are set out individually. On one side of the restaurant is a small bar, where a kiosk window opens to sell snacks during the day. Halali's restaurant is very much a canteen, but when we last stayed here we thought that it was good value, albeit with mediocre service.

Halali's swimming pool is one of the best swimming pools that you'll find at any camp in Namibia: very much like a large, open-air municipal pool, however without a lifeguard. Do expect a huge pool; don't expect to have it to yourself!

As at Etosha's other restcamps, one of Halali's big attractions is its floodlit waterhole. This can be viewed at any time of day or night, from a rock terrace which is on one side of the camp.

Although the game sightings here aren't quite as predictable as the phenomenal sightings at Okaukuejo, they are generally very good – and particularly notable for black rhino.

Both morning and afternoon guided 4WD safaris are available from Halali, as are night drives – which may not be done by self-drivers. None can be guaranteed, and All must be booked locally, when you arrive at camp, so there is no guarantee of space. It is, however, very easy to drive yourself around the park, as long as you are back by sunset.

Halali often gets booked up in advance, especially in peak season (July to October). Expert Africa holds several rooms throughout this period – usually two-person chalets – reserving them for travellers who visit Halali as part of a fly-drive holiday with us. This means that sometimes we have space at Halali, even when the camp will tell you that they are 'full'.

For up-to-date availability information, see Halali's live availability page – and remember that these rooms are only for travellers who book their whole fly-drive itinerary with us.

As a large restcamp, Halali offers a very different experience from the smaller, private lodges. Don't expect much personal attention here, and the staff are not always as helpful as they might be. Despite this, Halali's amazing location right in the middle of the park, along with its floodlit waterhole, make it a popular and good-value choice.

Location
Etosha National Park, Namibia
Ideal length of stay
Anything from two to seven nights, but two would be typical, often combined with a few nights at Etosha’s other main camps : Okaukuejo, Namutoni and Dolomite
Directions
Halali lies between the two government-run restcamps of Okaukuejo and Namutoni in Etosha National Park, and is well signposted from both. Depending on your routing around the country, the camp can be accessed from either the southern Andersson’s gate or the eastern Von Lindequist gate.
Accessible by
Self-drive or Fly-and-Transfer

Usual board basis
Bed & Breakfast
Food quality
Although we did not eat here on our most recent visit in March 2017, on a previous visit the standards were mediocre. All meals are served buffet-style.

Breakfast is a substantial buffet of different cereals, yoghurts, fruits and cold meats – plus a variety of breads, cheeses and cold meats, and the option of a cooked breakfast.

The restaurant does not serve lunch, but there is a kiosk open during the day, where you'll find basic meals, including toasties and chips.

Dinner is more formal and you can expect the chef to stand in the front of the restaurant preparing the evening meal: anything from a stir-fry to a carvery. For dessert there are normally cakes, pudding and ice-cream.

Many of the chalets at Halali have their own braai (barbecue) facilities, and you can buy wood and charcoal from the camp's shop. Hence many visitors prefer to organise at least some of their own meals here. If you want to do this, we'd advise you to buy food before you enter the park – there's a much wider choice (especially of fresh vegetables) than you'll find at the shops in the restcamps.

Family holidays
With one of the largest pools in Namibia and a relaxed, family-friendly atmosphere, Halali Camp makes a great stop for those travelling with children in Namibia. Its convenient location within Etosha National Park is an added plus, and it’s relatively economical too.
See ideas for Family holidays

Attitude towards children
Children are welcome with their parents.
Property’s age restrictions
There is no age restriction at Halali
Special activities & services
The restcamp has a swimming pool and a waterhole that children can enjoy under adult supervision. Children must be over six to participate in game drives organised by the camp.
Equipment
On our last visit there was some high chairs for use by children in the restaurant and stretcher-style beds can be added to some of the rooms.
Generally recommended for children
Yes – and because the camp is large and fenced, it's better suited to children than many private camps.
Notes
Although the camp is fenced, it is large, so there will be vehicles moving around. The pool is also unfenced therefore all children should be carefully supervised

Since mid-2018, many of our travellers who stayed at Halali Camp have kindly recorded their wildlife sightings and shared them with us. The results are below. Click an animal to see more, and here to see more on our methodology.

Power supply notes
Generator back-up
Communications
There is some cellphone reception at Halali, and there is also a public pay-phone, for which you can purchase phone cards from the shop. You can also purchase WiFi vouchers at the reception for use in the central areas.
TV & radio
There is no TV or radio in the rooms.
Water supply
Mains
Water supply notes
The toilets are flush and the showers are plumbed in.

Malarial protection recommended
Yes
Medical care
The closest doctor or hospital is in Outjo, about a two-hour drive away.
Dangerous animals
Moderate Risk
Security measures
There are security guards at the restcamp.
Fire safety
There is a fire extinguisher outside each chalet/room.

Disabled access
On Request
Laundry facilities
There is no laundry service here, but there's space to hand-wash items yourself if you need to.
Money
Currency exchange is not possible at the restcamp
Accepted payment on location
Visa and Mastercard are accepted at the restcamp and no commission is charged.