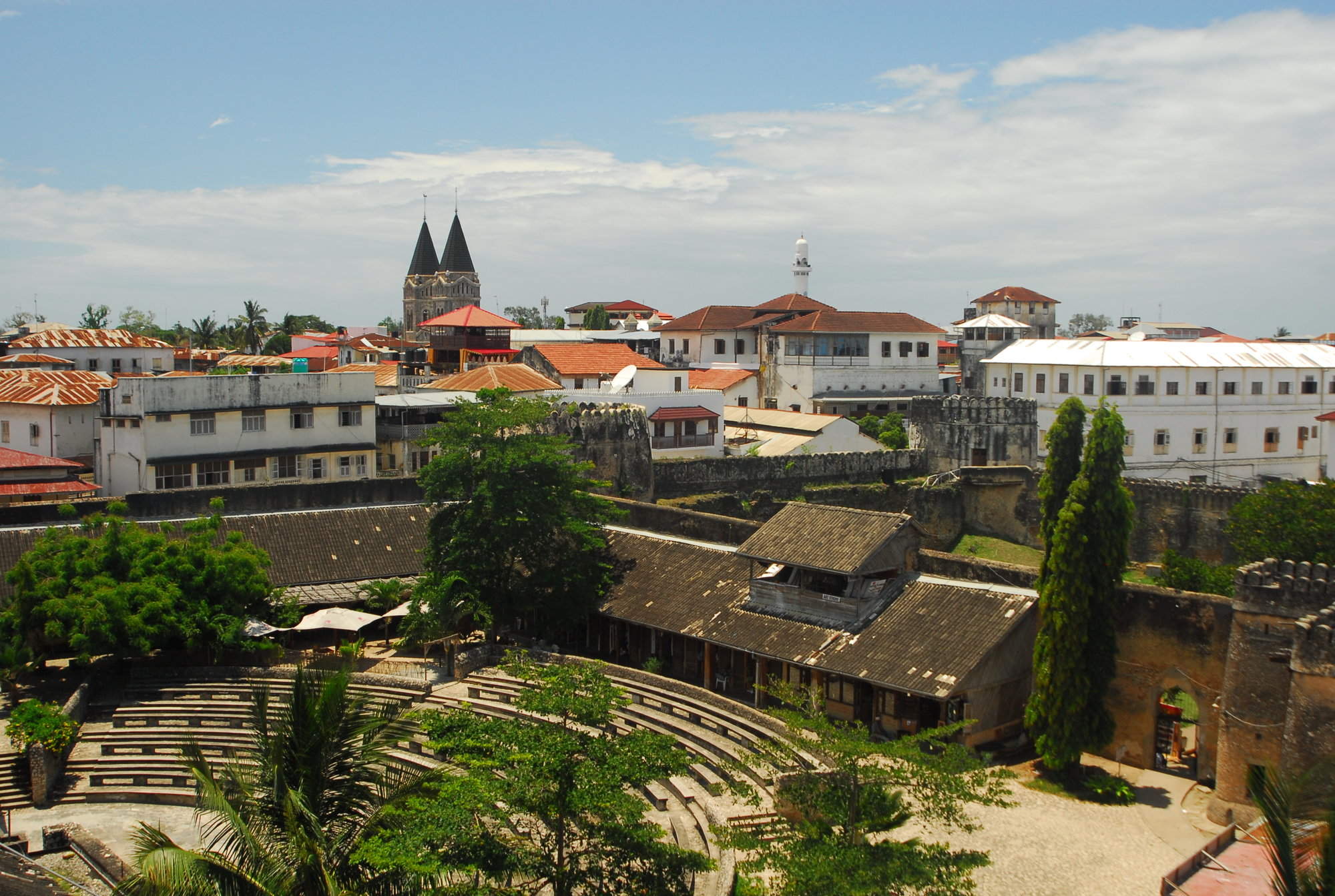 Colourful, stylish and with a strong sense of place, Emerson Spice is a boutique hotel in the heart of Stone Town.

It is one of two similar sister hotels a minute's walk apart. A fabulous rooftop restaurant and individually designed rooms add considerably to the attraction, though note that the hotel is usually closed throughout May.

The brainchild of the former part owner of Emerson & Green (now the Emerson-on-Hurumzi), Emerson Spice was opened in 2014 and has 11 impressive and varied rooms, including a family room. Most of the rooms are quite flamboyant in style and each has its own colourful twist on a Swahili theme. Think high ceilings, brightly coloured walls, stained-glass windows, and the intricately carved doors for which Zanzibar is famous. Individual colour schemes feature purple, red or deep-green fabrics complementing the stonewashed walls. The furniture is Zanzibari and includes beautifully carved wooden tables and traditional Zanzibari beds. All the rooms are well equipped, too, with fans, air conditioning, fridges and mosquito nets.

It's not just the rooms which benefit from this attention to detail: the public areas of Emerson Spice – with a twinkling blue fountain set in an interior courtyard – are also well designed. Reminiscent of a Moroccan riad, this courtyard is a cool, palm-filled walled garden, with a swinging seat and a hammock. Large carved wooden doors open into a cool, blue entrance hall and reception, filled with carved furniture and chaises longues. Towards the back of the house, the Secret Garden is a rustic, open-air courtyard restaurant, a former marketplace now artfully transformed with tables, potted palms and artworks amid the crumbling walls – which is particularly popular at night. A local taarab band (a traditional Swahili orchestra) sometimes plays in the gallery above the garden.

Up a wooden staircase are the guest rooms, each with its own theme, and unique in style, layout and size. 'Aida' room looks out over the 'Secret Garden' and has a balcony. This is a good family room, with a double bed and two singles on a mezzanine reached by a spiral staircase. 'Lamour' can sleep four in two double beds and 'Kate', which has two balconies and an outside bathtub, can sleep a double and two singles.

Finally, up on the roof is the rooftop restaurant, which is in itself a reason to stay here. The five-course tasting menu is delicious – inventive and full of local flavours – as well as being very good value. From the rooftop, you can look west to the Hindu Temple, 200m away. The slightly taller building to the east is the Swahili House hotel, and the green-roofed building to the south is the Zanzibar Coffee House.

The rooms at Emerson Spice are excellent, and have lots of character, while the overall standard of service, and particularly the dining options make this one of Stone Town's very best traditionally styled places to stay and eat. Along with sister hotel Emerson on Hurumzi, we loved our stay here in 2019, and look forward to returning.

Location
Stone Town, Zanzibar
Ideal length of stay
Stay 1–2 nights to explore Stone Town.
Directions
Late at night, Emerson Spice can be just a 15-minute transfer from Zanzibar Airport, however it's best to allow 30 minutes. Drivers need to liaise with the hotel for the best drop-off point, as there is no vehicle access. The best place to park is the mosque car park by the House of Wonders, next to the Palace Museum, from where the hotel is a 3-minute walk.
Accessible by
Fly-and-Transfer

Usual board basis
Bed & Breakfast
Food quality
The dining options at Emerson Spice include Tea House at Spice, on the top floor rooftop, where a five-course set menu is served at 7pm every evening and needs to be booked in advance as it often books out. The cost is $40 per person, and the evening starts with cocktails in the sunset from 6pm. This meal was a real highlight of our visit to Stone Town in 2019. Dishes include passionfruit ceviche starter, lobster king roll with chilli lemon beetroot, kingfish in a coconut sauce, kole kole with mango pickle, and a guava givré with peanut brittle. Please note that as this is a set menu, the roof top restaurant can not cater to special diets (including vegetarians, vegans or those who do not eat fish).

On a previous visit we ate an excellent dinner down in the à la carte Swahili grill ‘Secret Garden Restaurant’ on the ground floor, and had breakfast on the rooftop the next morning. Our dinner started with slipper lobster kebabs with a limey sauce, followed by a glistening goat stew with cardoman rice that was a rich and sticky alternative to yet more seafood. Emerson get their goat meat from an excellent local farm. As they do their eggs, which appeared on the rooftop breakfast menu the next morning – the yellowest yolks we’ve ever seen in East Africa. They came accompanied by appetising wholemeal toast, succulent grilled tomatoes, local soft mandaazi donuts done really well and a fabulous fruit plate to make you glad to be alive, featuring custard apple and mango. Even the coffee was flavoursome and aromatic, rather than the overpoweringly strong and bitter brew so commonly served.

It's all very good, and very impressive. If you arrive very late at the hotel, a cold plate is offered to guests arriving after the kitchen has closed.

Cultural experiences
A converted merchants house, Emerson Spice is filled with charm and character. Walking through the doors you feel as if you have stepped back in time. The central location is ideal to explore the narrow streets and delve into Zanzibar's rich culture.
See ideas for Cultural experiences

Attitude towards children
Children are allowed at Emerson Spice.
Property’s age restrictions
None
Special activities & services
There is a family room here.
Equipment
Emerson Spice can provide highchairs and cots on request. 'Aida' room is a family room and the 'Kate' room can sleep a double and two singles.
Generally recommended for children
Emerson Spice is fine for children, however parents should be aware of the steep stairs and high balconies.
Notes
There are some steep stairs, and children are the responsibility of their parents at all times.

Power supply notes
24 hour electricity from the mains, with generator backup. However, when there is a break in mains supply, the AC doesn't work from the generator.
Communications
There is reasonable cellphone reception (Zantel) and in-room mobiles are offered as part of the service. WiFi is available in all the rooms.
TV & radio
There is no TV, however TVs are available in various restaurants and shops around Stone Town.
Water supply
Borehole
Water supply notes
Bottled drinking water is supplied, but the main sources are a well and rainwater collection.

Malarial protection recommended
Yes
Medical care
There are many doctors in Stone Town and a good new hospital, the expensive 'Global Hospital'. The hotel calls on Dr Mehta, who is usually available and has an ambulance.
Dangerous animals
Low Risk
Security measures
Doormen are on duty at all times, and night porters take over after dark. Late arrivals or late returning guests need to be advised in advance.
Fire safety
Fire extinguishers are located in the kitchen and all the main areas.

Disabled access
Not Possible
Laundry facilities
A laundry service is available free of charge and normally takes about 24 hours.
Money
There is no exchange service but Stone Town has plenty of ATMs. There are no safes in the rooms, but guest valuables can be placed in the central safe at reception.
Accepted payment on location
Cash payments in US dollars and Tanzanian shillings are accepted (not Euros or Pounds) as are payments by Visa and MasterCard (in US dollars only), for which there is no surcharge. Cash advances are not possible.