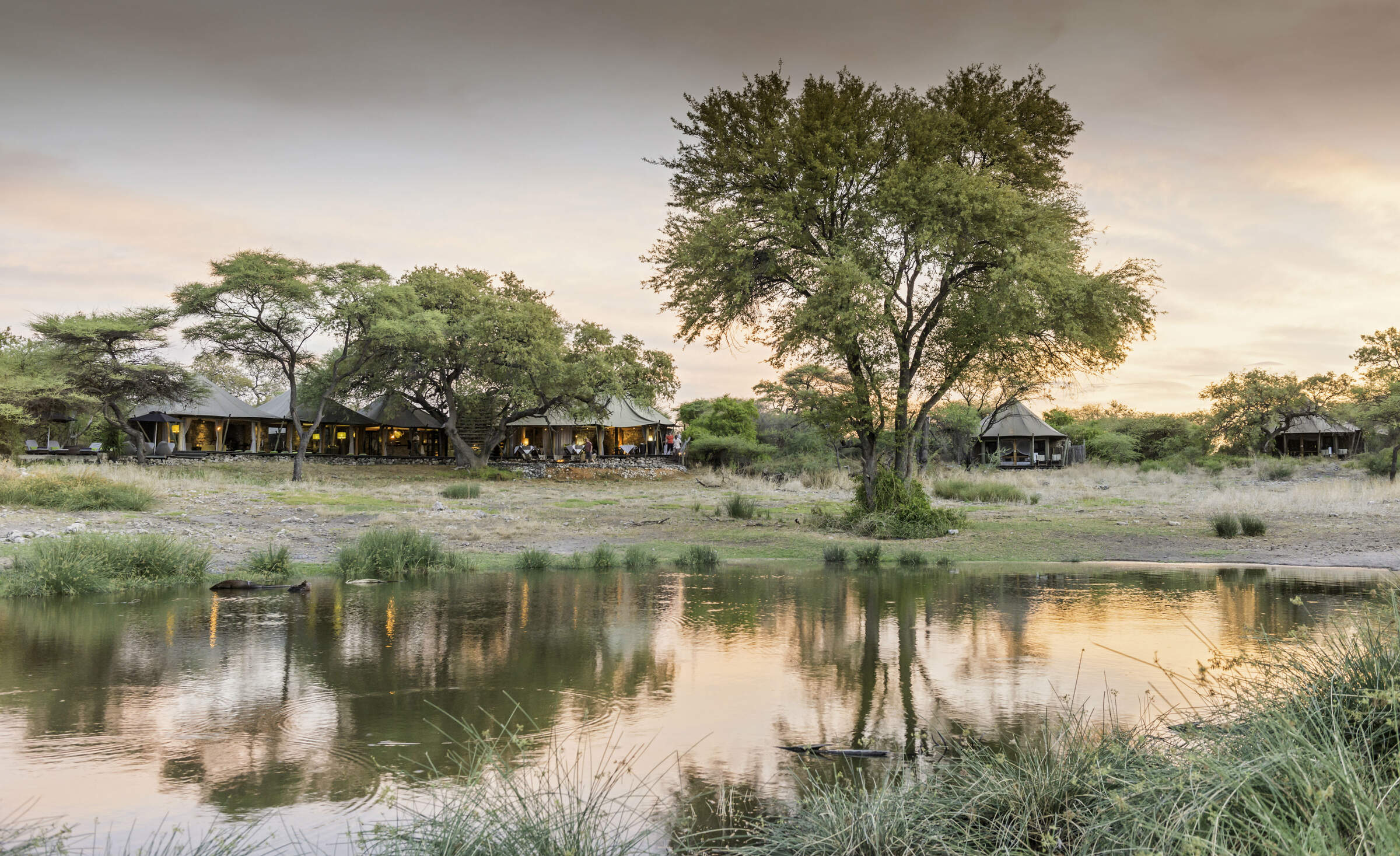 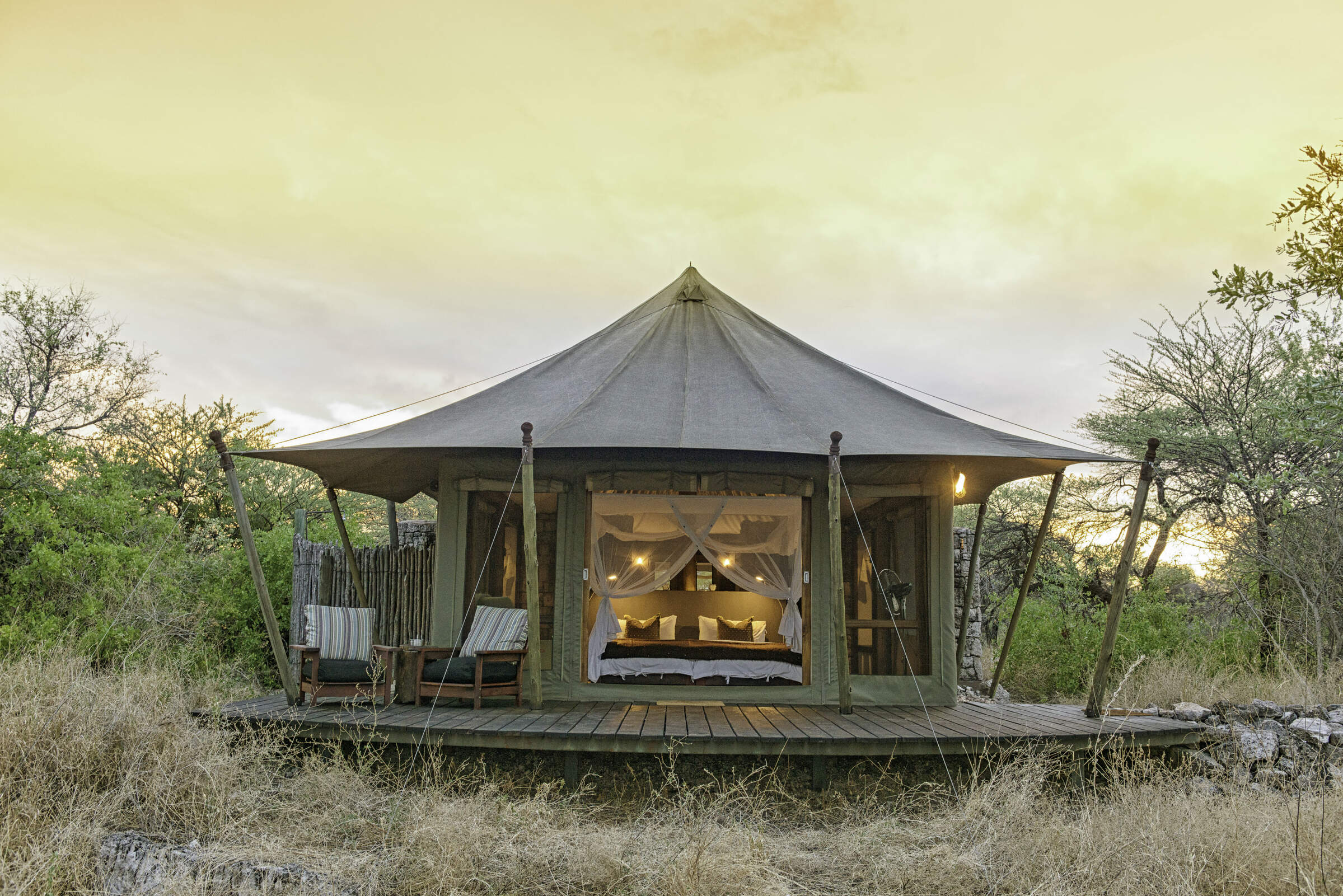 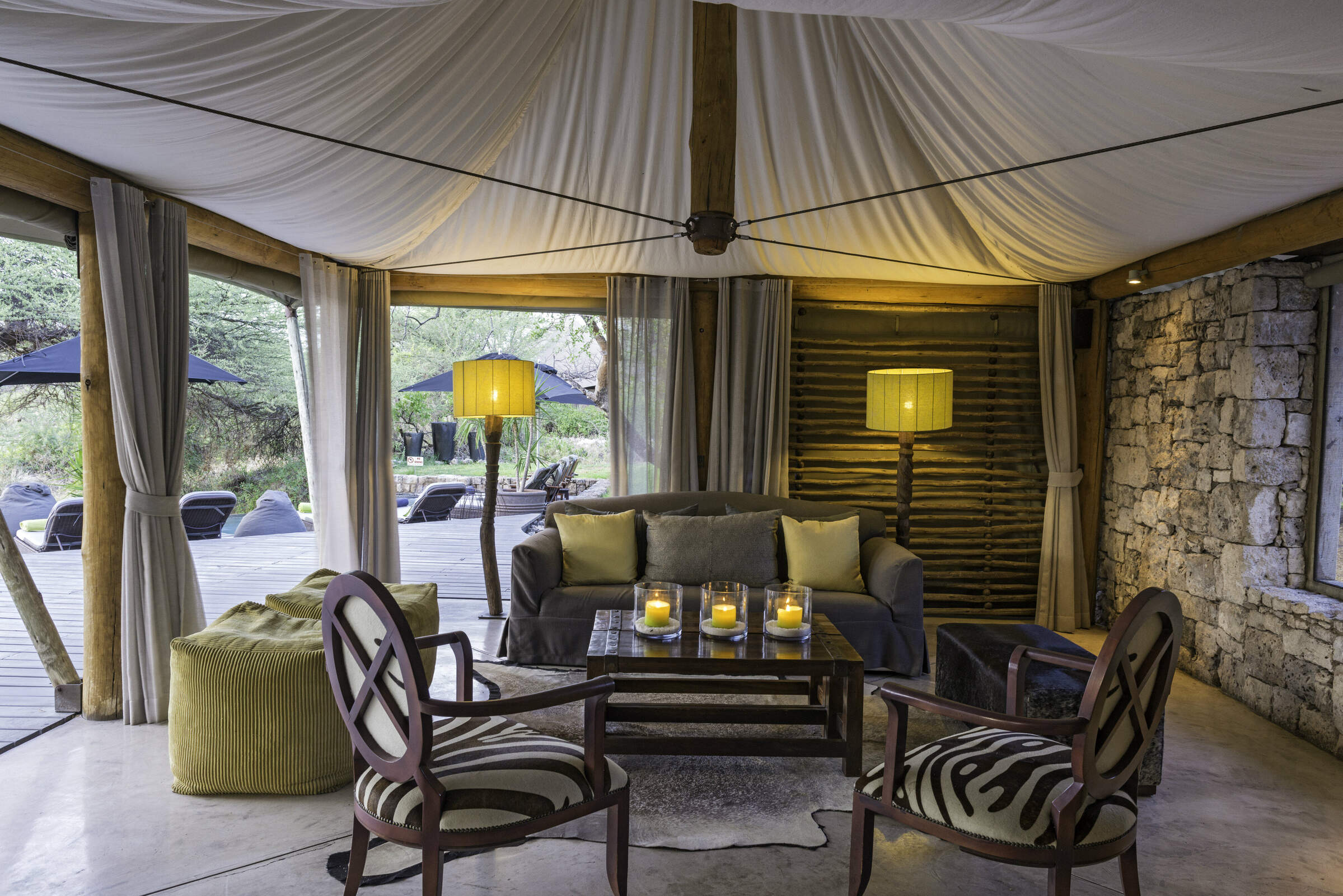 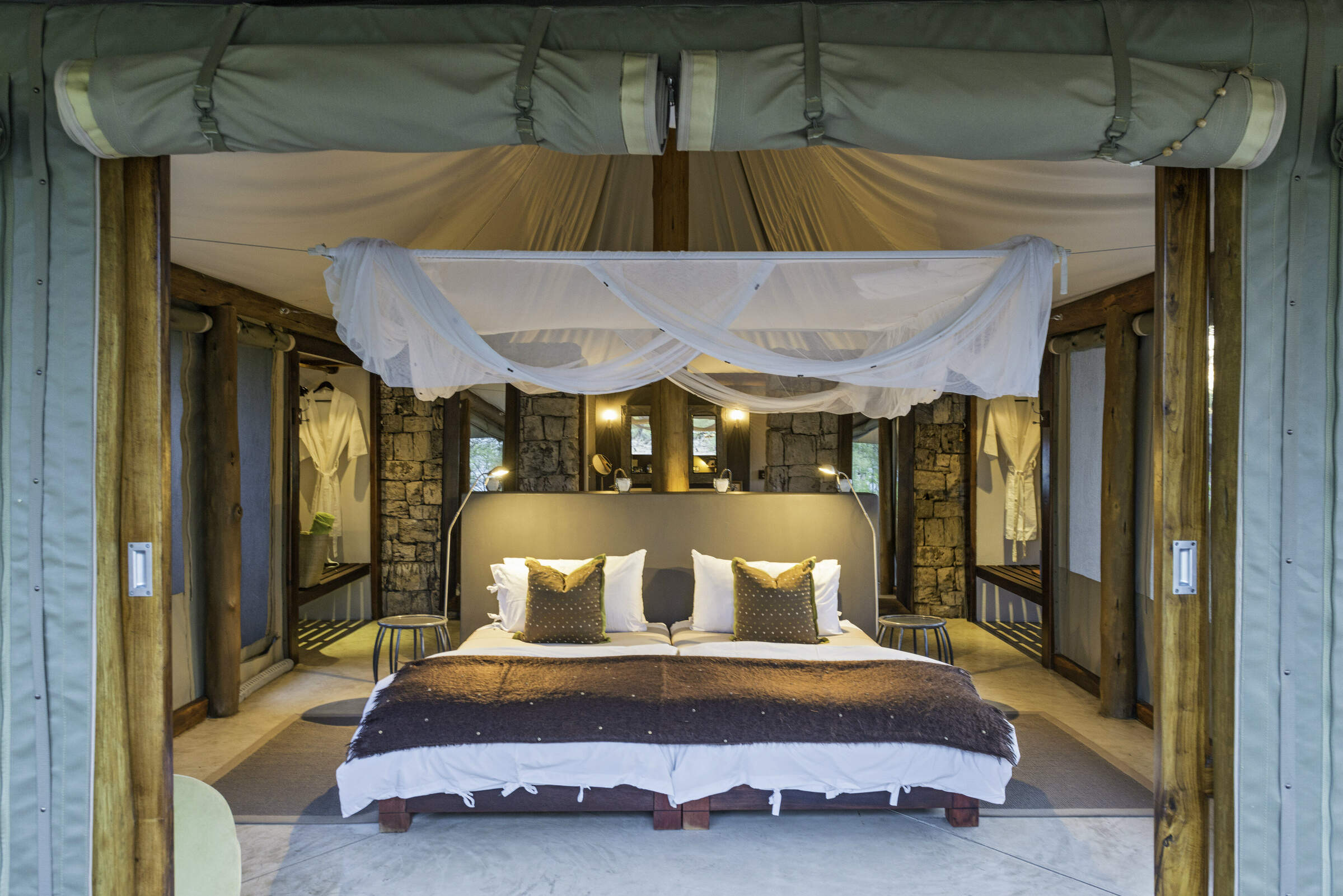 79 independent comments and wildlife information from our travellers who have visited Onguma Tented Camp and kindly agreed to share their thoughts. They do not necessarily represent the views of Expert Africa

2 nights Arrived 15 Nov 2014
"Like all the Onguma accommodation, our 'tent' allowed us to sit and while the time away watching the waterhole - not the most exciting selection of animals, but beautiful all the same.

2 nights Arrived 28 Oct 2014
"Guides not as well trained or motivated as those we met on Wilderness camps.

2 nights Arrived 28 Sep 2014
"This was one of the most beautiful camps we stayed at on our entire trip. The central area was large and stylish, the dining area most attractive, overlooking the large waterhole, and the lovely rooms wonderfully sited around the same waterhole. The whole camp was well designed and had many individual touches.

Food was good to very good. Some of the staff had poor English, so it was not always possible to make yourself understood, but there was no shortage of effort, and everyone worked to help us have a good time. Drinks around the campfire was a lovely moment. Dining was separate, although we combined tables with another couple we had met over drinks.

The afternoon game drive we took netted three lions just by the camp, as well as a marvellous pair of bat-eared foxes, jackals and a brooding group of white-backed vultures quite low down in the palm trees. But game was by no means plentiful." See all these reviews: 14n in Namibia
Experience Report
Overall Rating:
Excellent
Location:
Good
Service:
Good
Activities:
Good
Rooms:
Excellent
Food:
Good
Mr M & Ms B
Brussels

The rooms were spotlessly clean and had Wi-Fi access, a safe and tea-making facilities. The staff were professional and friendly but not overbearing. The guide was knowledgeable and pleasant to talk to. The food was delicious.

We highly recommend this camp. Staying at Onguma was the high point of our holiday.

2 nights Arrived 3 Aug 2014
"Great location just by the park gate. Nicely situated next to a small waterhole. But after Andersons and Damaraland camp this was a complete disappointment.

This camp was stuffy and formal, with absolutely no atmosphere, and a poor recommendation for a large family group. The staff were very polite but very quiet and reserved. I wouldn't have liked this camp even if I'd been in a couple. It was just too quiet and restrained - trying to be something that it wasn't.

The rooms are huge , so they were being pretty inflexible insisting that we had to have 4 rooms, rather than allowing the 3 kids to share and having 3 rooms between us - as we did at all other lodges. I wasn't that keen on sharing my room with a very active rodent, which was very happy coming and going through a gap in the canvas - but more concerned that if a large mouse could get in, then so could a snake...

It turned out that the 4 gunshots we heard before dinner marked the demise of a spitting cobra which was trying to attack the chef - apparently it would have been looking for mice - presumably like the one I was sharing my room with. The food was nice, but spoilt by the lack of atmosphere - so all the couples ate in silence and then went. Not comfortable or relaxed.

A real shame, as we were anticipating that this camp would be a real highlight. I imagine it was the most expensive place we stayed, but the least enjoyable. Not a good recommendation. Not sure why they insisted that we had to be accompanied by a guard when going to and from our rooms - yes, of course there are animals out there, but non of the other camps insisted on this. He clearly wasn't armed anyway - and it just contributed to the formality.

Great staff, particularly Cacious (sorry if misspelt) who had to deal with a rather unpleasant American and handled it with great dignity.

2 nights Arrived 17 Oct 2013
"The tented camp is a good half hour drive from the entrance on the east side of Etosha, but a good location if you choose not to stay in the park. We had a great room overlooking the watering hole where the smaller antelope and warthogs come down in the early morning.

2 nights Arrived 10 Oct 2013
"We loved everything about this camp - the peaceful setting around the waterhole (mainly, see below!), the beautiful tents, charming staff & the quality of the activities.

As we'd already had quite a lot of luck in driving ourselves around Etosha, including a leopard sighting, we only chose to do activities with the camp where they were on their reserve - which is afternoon and evening drives.

When you arrive at Onguma they make a big thing about not having as much game as Etosha, which is clearly true, however it didn't stop us seeing both Leopard and Rhino on the Rhino drive, cheetahs on the Night Drive and a male lion on the Sundowner drive. The lion also paid us a visit at the camp waterhole during dinner on our first night, announcing his arrival with the hugest roar that seemed to shake the whole camp. The bird life on the camp rarely gets a mention but that was terrific too. Thoroughly recommended." See all these reviews: 14n in Namibia
Experience Report
Overall Rating:
Excellent
Location:
Excellent
Service:
Excellent
Activities:
Excellent
Rooms:
Excellent
Food:
Excellent
Facilities:
Excellent
Mr G & Mrs F
Canada

2 nights Arrived 28 Sep 2013
"This camp has a lovely setting and the rooms and facilities are luxurious. The small infinity pool overlooks a great waterhole, so you can enjoy a cool drink and swim while watching the warthogs and antelope.

2 nights Arrived 22 Sep 2013
"We arranged a night drive in the Ongama Reserve and saw an Ardvark. an Aardwolf and a Lioness with four cubs as well as Giraffes and Impalas. The next day, on our way into Etosha, driving ourselves, we spotted a Black rhino grazing by the side of the road. Our list goes on. We saw close to fifty elephants at a water hole, a spotted hyena, as well as many groups of plains game. Quite an experience.