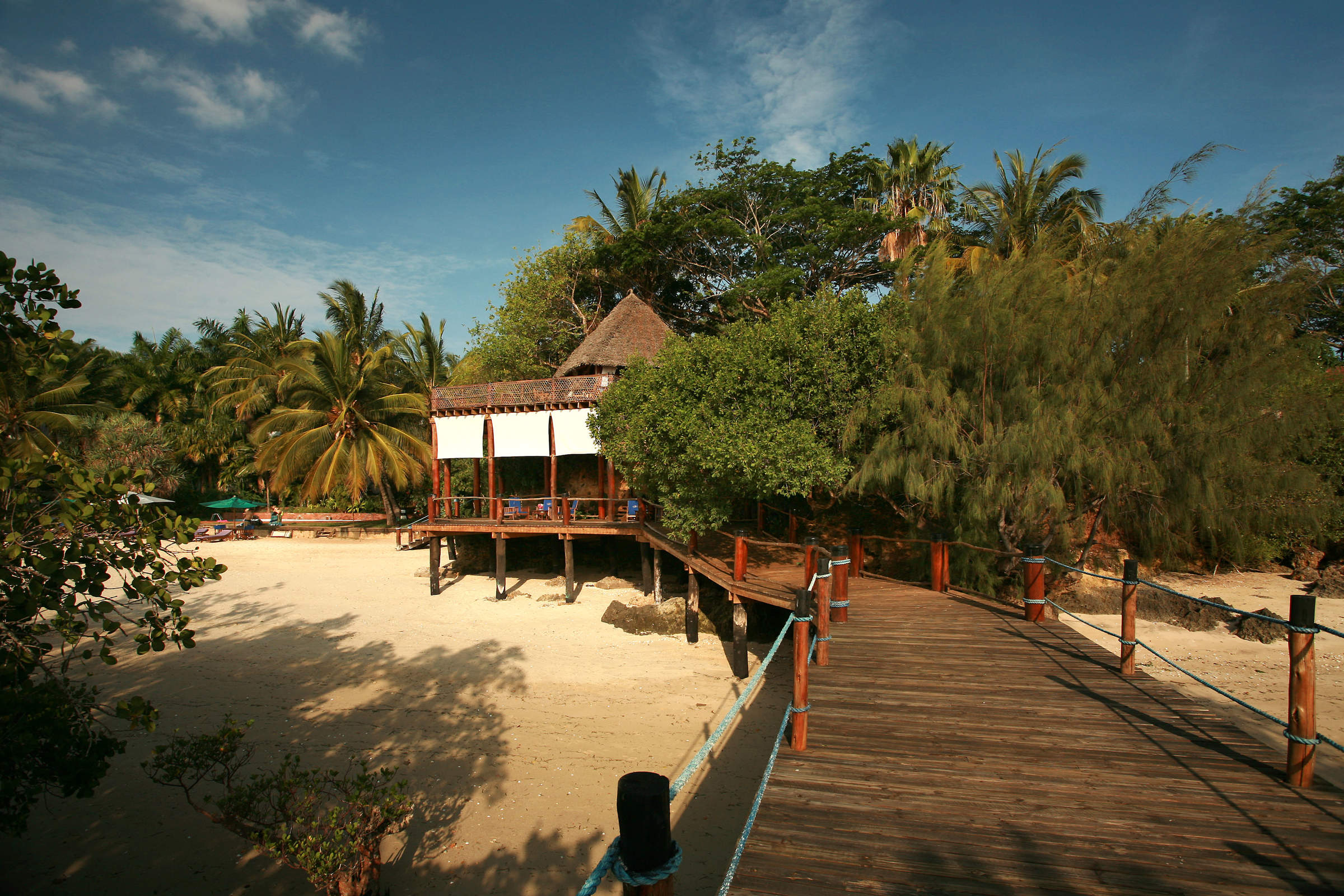 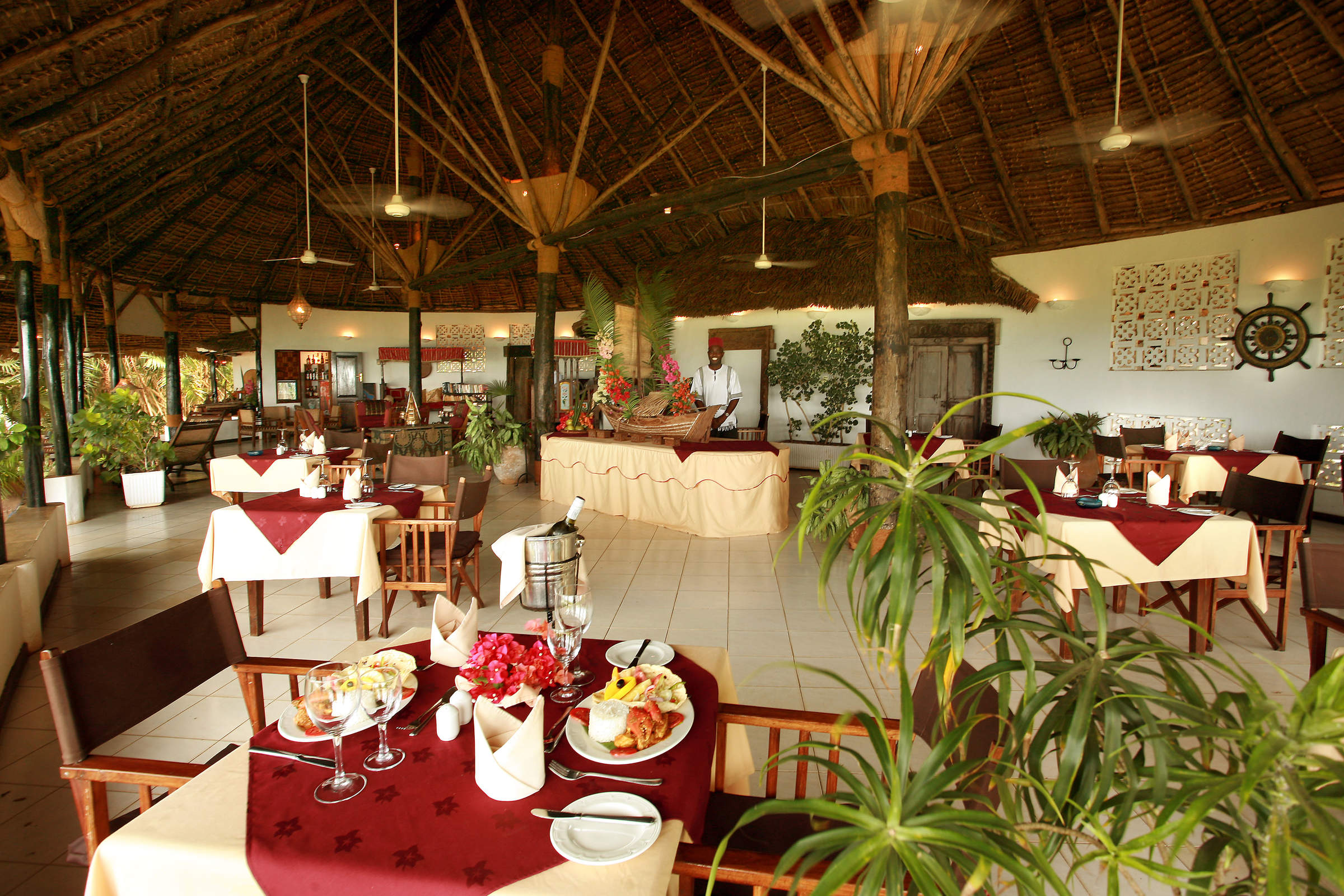 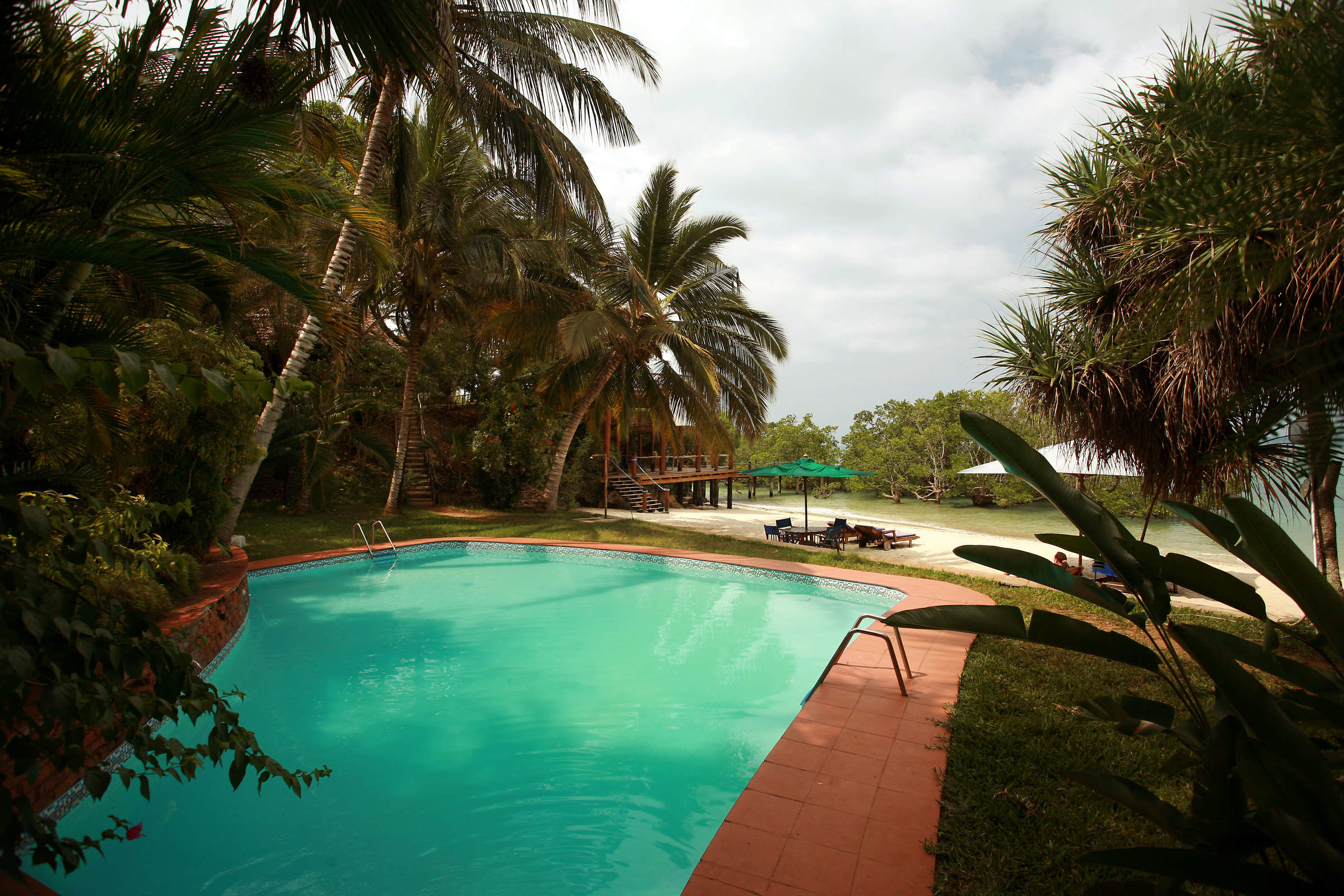 Mbweni Ruins Hotel is a small hotel south of Stone Town, next to the ruins of the old Mbweni mission, and ...

... managed by Protea Hotels. This area was once the beach retreat of a wealthy Omani family, part of which was bought in 1871 by the Universities' Mission to Central Africa to create an Anglican mission and a village for freed slaves. Several of the buildings are still standing today and there are fascinating relics all around.

Mbweni Ruins Hotel sits in lush tropical gardens that slope gently down towards the sea. It has pleasant public areas, with good views west across the sea towards mainland Tanzania and an unobstructed view of the sunset. It is run by Protea Hotels, which also manages Oyster Bay in Dar, and Amani Beach in the Ras Kutani area south of Dar.

The central bar and dining areas at Mbweni Ruins Hotel are part of an open-sided banda, the Rainforest Restaurant with a thatched roof and white-tiled floors, which sits in well planted gardens, on a low coral cliff above the west-facing beach. The bar area has low-slung basket-work chairs, which are a comfortable enough to relax and have a drink.

In front is a large, two-tiered deck which projects out over the beach. The views across the sea from here are wonderful, and it is a popular spot with locals and expats for a sundowner drink and a quick bite to eat.

From here, stairs lead down to the beach and swimming pool, which is surrounded by lawns, and has plenty of sun loungers. On the beach itself, there are tables with sunshades, where you can have drinks or lunch.

The rooms at Mbweni Ruins Hotel are reasonably comfortable and clean and decorated with local fabrics and dark Zanzibari furniture. These heavy furnishings make the rooms feel quite dark, and they could all do with updating. The rooms have house phones and tea and coffee-making facilities, and include a functional bathroom and a small vestibule with a desk, minibar-fridge and digital safe. There are 6 standard twin rooms, 4 standard double rooms, and 3 family rooms that can sleep up to five people, and incorporate a double bed and bunk beds, all with mosquito nets. One of the family rooms is called the Baobab Suite and has an extra-large balcony.

Mbweni Ruins Hotel is ideal if you want to be close to the museums, shops and restaurants of Stone Town, while staying on the beach. It is only 15 minutes by taxi to the centre of Zanzibar's capital (around $5–10), and the hotel provides a free minibus shuttle service at 9.45am and 1pm.The hotel is also particularly convenient if you want to spend a night somewhere before or after a stay at Chumbe Island Lodge, as the daily boat to Chumbe leaves from the hotel's jetty.

Although it's in a good location, and has excellent staff who try hard, the standard rooms at Mbweni Ruins Hotel are a little too small, dark and characterless to recommend wholeheartedly. We like the restaurant and beach area, and it's handy to be so close to the airport, and to be able to get in and out of Stone Town with relative ease.

Location
Stone Town, Zanzibar
Ideal length of stay
A few nights so that you can relax on the beach for a day and explore Stone Town as well.
Directions
Mbweni Ruins Hotel is a 10-minute drive from Zanzibar airport - both are on the south side of Stone Town.
Accessible by
Fly-and-Transfer

Usual board basis
Bed & Breakfast
Food quality
The family-friendly Raintree Restaurant is open from 7.30-10am for breakfast, which is served as a buffet of pastries, bread, fruits and cereals, cheese, vegetables, sausages and cold meat, and eggs or omelettes from the egg station. Lunch, served more or less when you want, is an à la carte menu including a variety of international dishes, and dinner is a 3-4 course set menu with two options for the starter and main course, and can be served until around 10pm.

When we last stayed here in 2106, we only had breakfast, and we found the food and service fine.

Attitude towards children
Children are welcome at Mbweni Ruins Hotel
Property’s age restrictions
There are no age restrictions at Mbweni Ruins Hotel
Special activities & services
Mbweni Ruins Hotel can organize babysitting using housekeeping staff (though they are not likely to have formal child care qualifications).
Equipment
Baby cots and high-chairs can be provided on request.
Generally recommended for children
Yes
Notes
Mbweni Ruins Hotel is good for older children who can keep themselves entertained (though in theory under-16s are supposed to be accompanied in the pool, which has no lifeguard). Parents should be aware that children are their responsibility at all times.

Power supply notes
There is automatic generator backup and UK-style 3-pin sockets in all the rooms.
Communications
There is free Wi-fi on a 24-hour renewed access code basis, and reasonable Vodacom cell phone signal.
TV & radio
There are small, wall-mounted satellite TVs in each room.
Water supply
Borehole
Water supply notes
Guests receive a half-litre bottle of drinking water per day in their rooms.

Malarial protection recommended
Yes
Medical care
Mbweni Ruins Hotel can call a doctor who will come to the hotel from nearby Stone Town.
Dangerous animals
Low Risk
Security measures
Mbweni Ruins Hotel has a team of discrete guards dotted around the hotel.
Fire safety
There are fire extinguishers outside each group of rooms, and in the restaurant-dining area, and periodic fire-training is undertaken by an outside contractor.

Disabled access
Not Possible
Laundry facilities
Laundry is an extra charge
Money
There are limited exchange facilities available at Mbweni Ruins Hotel, however Stone Town is nearby and has several ATMs.
Accepted payment on location
You can pay for any extras in US dollars and Tanzanian shillings (TzSh) cash. You can also pay using Mastercard, Amex and Visa. There is no surcharge for this, but there's a minimum TzSh50,000 payment.

All the rooms at Mbweni are housed in a single, two-storey building. The rooms are laid out as miniature suites, with a little vestibule and desk, a separate en-suite bathroom and a small balcony with a table and a few chairs. The rooms have air-conditioning and are furnished either with twin beds, or with Zanzibar canopy double beds, two lounge chairs and a small Zanzibari table.

In the twin rooms, a ceiling-to-floor mosquito net screens off the bedroom end of the room from the small lounge area. In the doubles, the net hangs around the bed.

The bathrooms of the standard rooms are clean and functional, with hot showers behind a plastic drape, a single wash basin and a large mirror, and a flush toilet. Toiletries are provided. Like the rooms, the bathrooms could be improved a lot with some redecorating.

The rooms have white-washed walls and tiled floors, and were looking somewhat tired and dated when we last visited in 2016. They are reasonably comfortable, but certainly need a face lift.