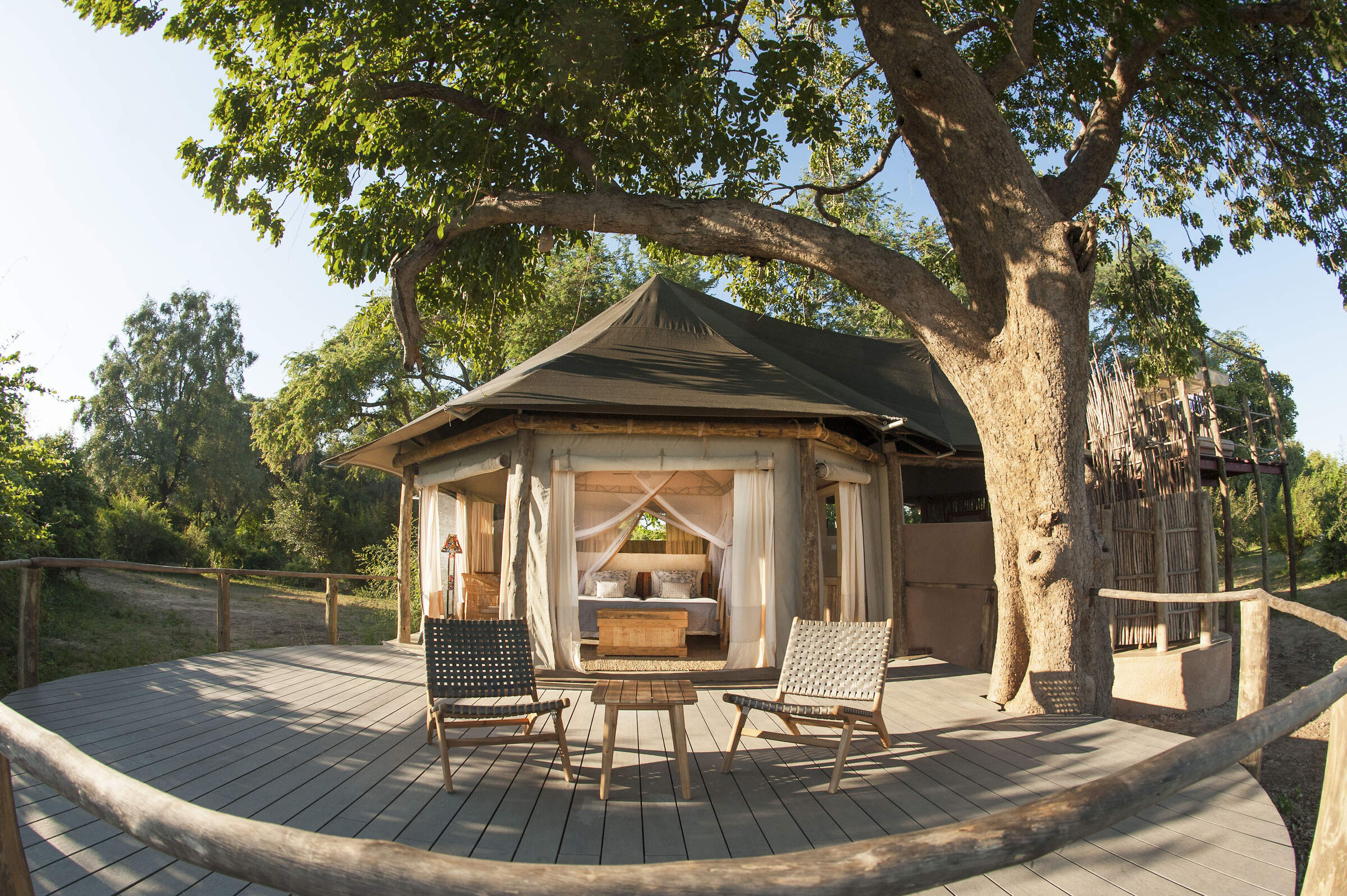 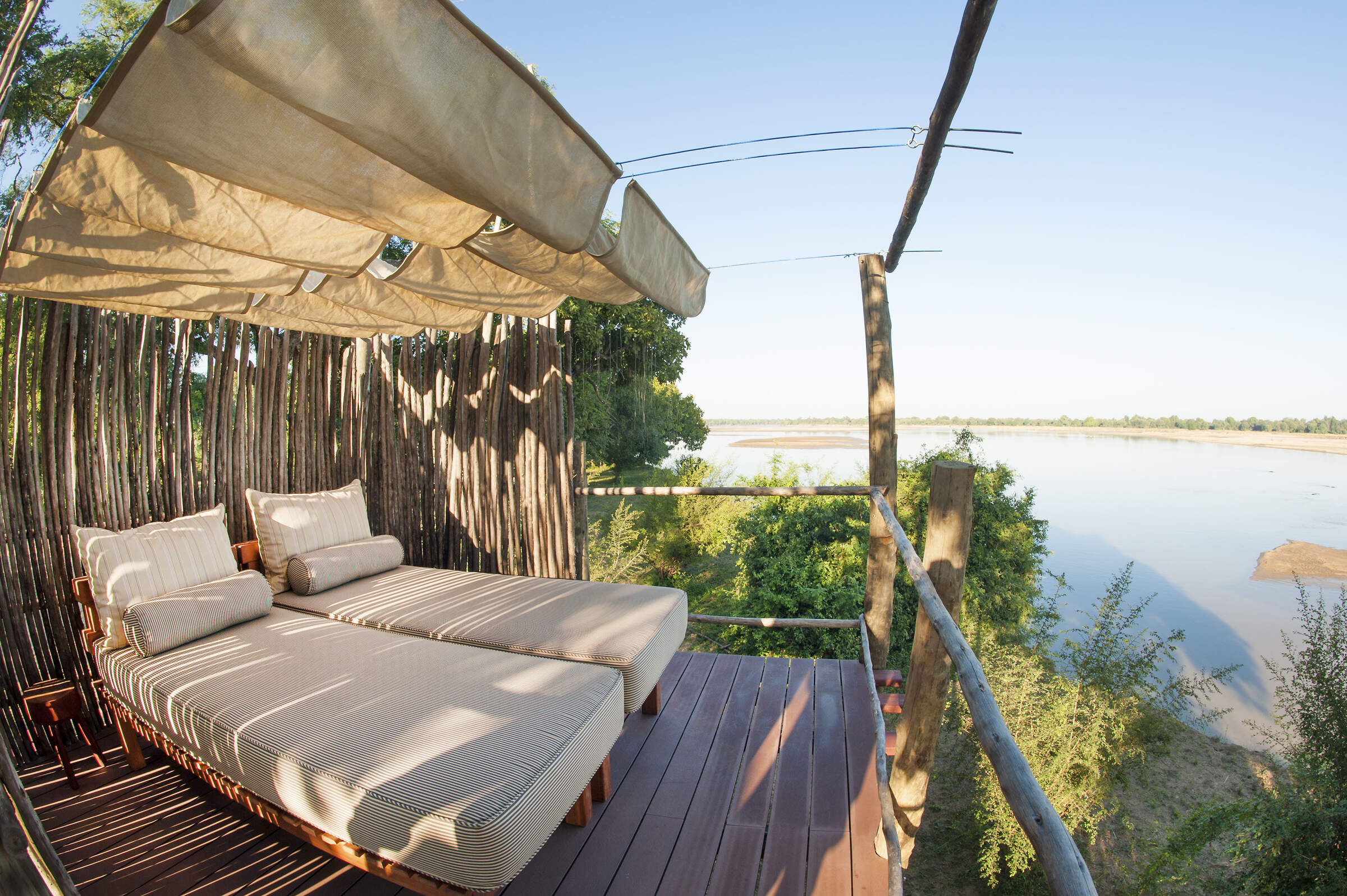 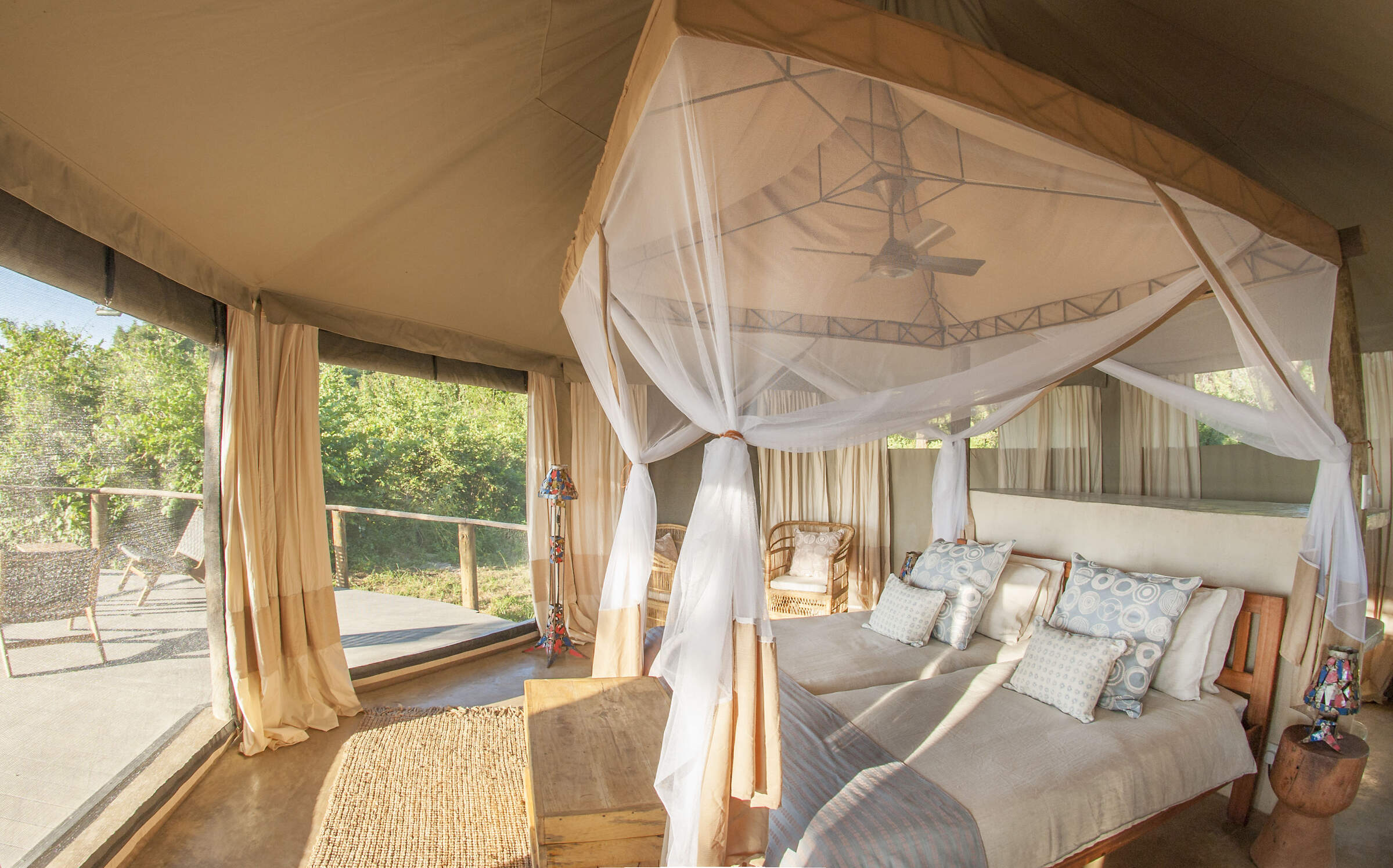 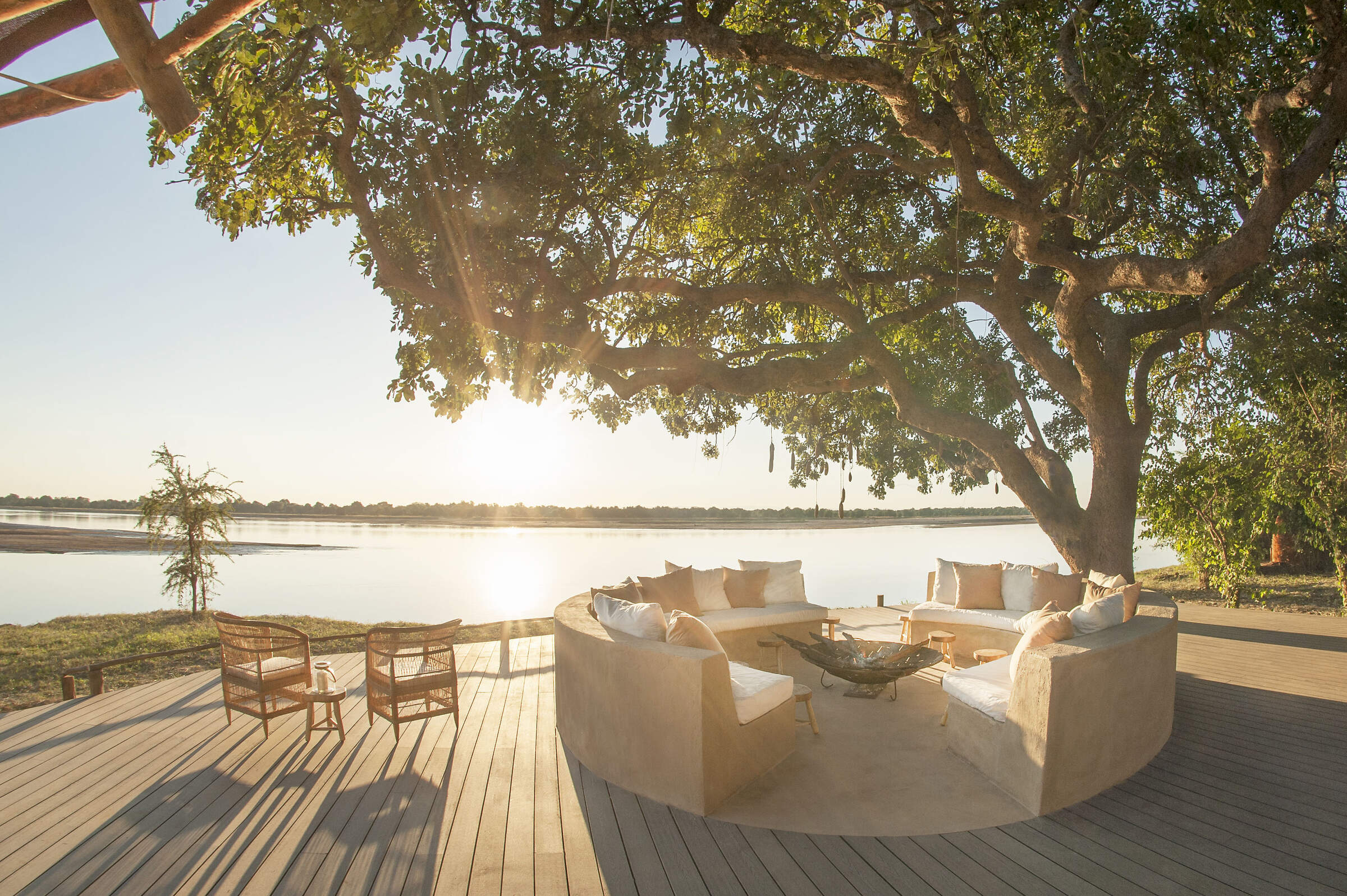 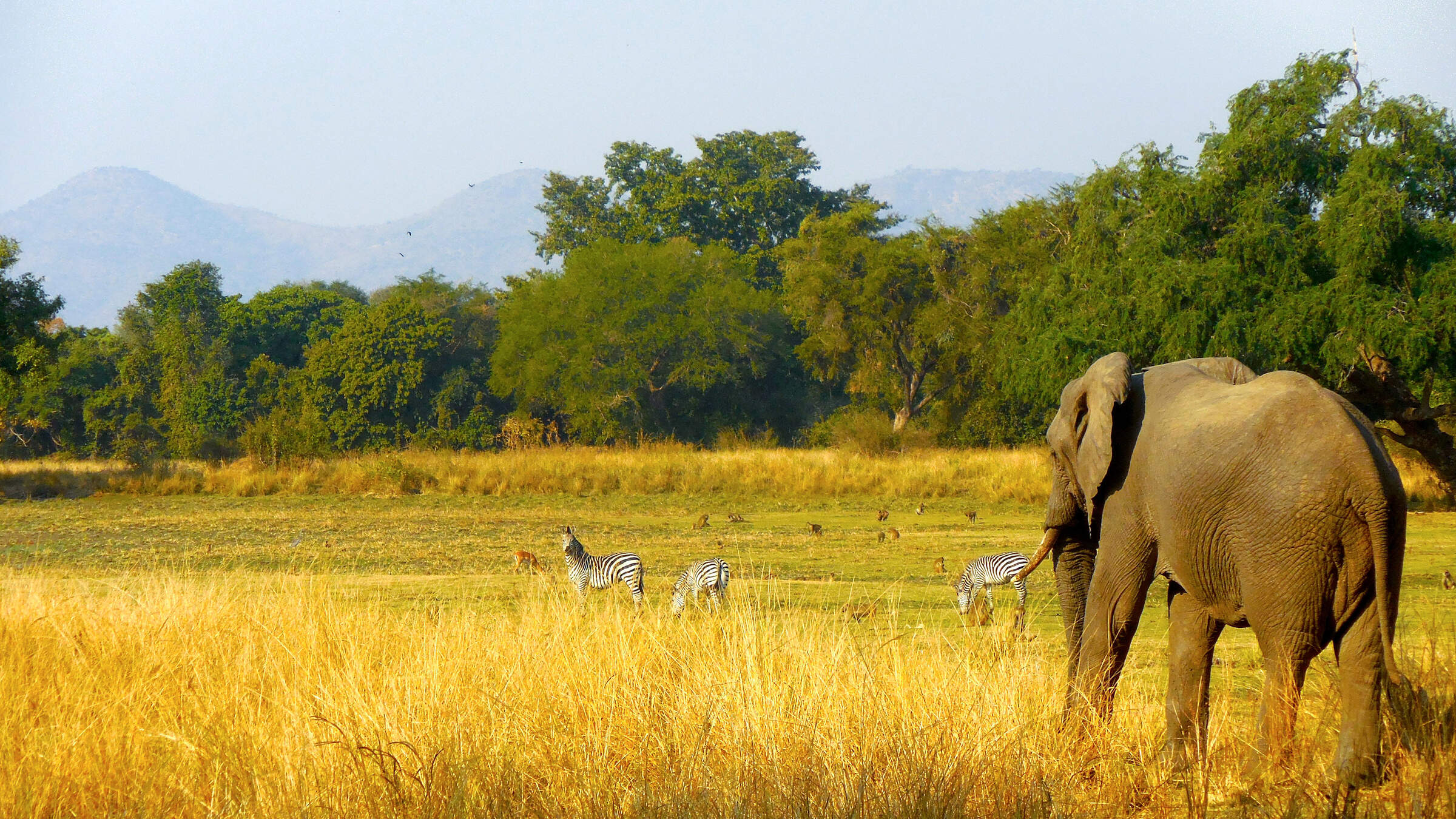 Appropriately named, the camp is located on at the confluence of the Luangwa, Lusangazi and Kapamba Rivers, and is one of only two camps in the southern area of the park located on the eastern side of the Luangwa River.

Three Rivers Camp owned and run by Kafunta Safaris who have been operating safari lodges in the South Luangwa since 1998. The camp is situated in the southern end of the park between its two sister camps Kafunta River Lodge and Island Bush Camp.

We haven't had a chance to visit, but from what we know the camp has five luxury tents raised up on platforms, each with its own private viewing deck. The tents overlook either the river or the lagoon, with elevated platforms and star beds for sleep outs. En-suite bathrooms have indoor and outdoor showers, double sinks and flushing toilets.

The main focus of the camp is on walking safaris and, should you combine Three Rivers Camp with Island Bush Camp, it is be possible to walk the 7km in between the two. However, there are also game drives on offer, allowing some flexibility in the choice of activities. The borders of the national park completely encompass the Luangwa River in this part of the valley, providing a large area for safari activities.

We pride ourselves in keeping up to date with all of Zambia's camps, new and old, and also in our ability to give you an impartial option based on personal experience. We haven't has a chance to visit Three Rivers Camp yet, but based on our experience at it's sister properties we are expecting a nice comfortable camp in a quiet area of the park. We hope to visit this camp as soon as it opens, so keep an eye out for more information.

Location
South Luangwa National Park, Zambia
Directions
Most visitors fly from Lusaka to Mfuwe (about one hour) and then transfer by vehicles to camps in the park. It will be a three-hour game drive through the park to Three Rivers Lodge.
Accessible by
Fly-and-Transfer

Since mid-2018, many of our travellers who stayed at Three Rivers Camp have kindly recorded their wildlife sightings and shared them with us. The results are below. Click an animal to see more, and here to see more on our methodology.

Reducing impact on the local environment

Three Rivers Camp is the youngest member of Kafunta Safaris, located at the confluence of Luangwa, Kapamba and Lusangazi Rivers in South Luangwa, Zambia.

The camp takes pride in its eco-friendly design which maximises guests’ comfort while minimising threatening risks to the local environment. Solar power generators are used throughout the camp and a water purification system was implemented to provide fresh water to everybody on-site. Candle-lit dinners contribute to saving energy, but also create a more intimate atmosphere, thus allowing guests to unwind and enjoy traditional cuisine and complimentary bar service, much needed after a long-day safari walk or drive.

Built in a rich area of biodiversity, the team at Three Rivers has already joined the conservation and community initiatives that Kafunta Safaris has been investing in for years. A small fee is added to guest accounts to ensure the long-term continuity of these projects which support research projects in the nearby areas as well as local schools’ as part of the Luangwa Project.

One of the Luangwa's oldest camps, Nsefu is a great safari camp in a remote, beautiful and game-rich location with top-rate guiding.

In a remote part of the South Luangwa National Park, Luwi is a rustic bushcamp whose emphasis is on walking safaris with great guiding and a chance of seeing some rarely seen and elusive antelope.